Brief Words of Mouth - The Revenant 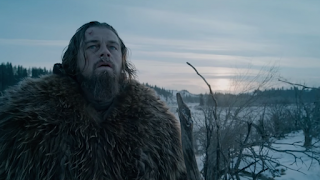 The Revenant: Or, I wasn't joking when I said Domhnall Gleeson was in everything.

Alejandro G. Iñárritu's follow up to his critically acclaimed 2014 dark comedy Birdman could not be more different. In stark contrast to that film's surreal stage drama, we have here a film focused on the life and death struggles of a fur trapper in the 1820's seeking vengeance for his son's murder.

Featuring absolutely beautiful landscape shots, the use of natural light and real environments adds authenticity to the physical suffering of Leonardo DiCaprio's Hugh Glass. It really did make me feel cold and isolated, and I did something I almost never do: I briefly napped for a few seconds a couple of times. I don't really mean that as a negative, either; the relentless cold, lack of dialogue, and soothing music during the middle of the film felt calculated to lull you into a state between waking and dreaming alongside Glass.


DiCaprio is fantastic here, and he's miles above costars Tom Hardy and Domhnall Gleeson, though both perform their roles decently. This really is all about DiCaprio, as he plays a role of a ghoul risen from near death for revenge, and he absolutely shines.

Issues of racial hatred, betrayal, and loss are shown with both the Natives and the Settlers, with only brief sparks of goodness in the hearts of either side. This gives the film an ultimately hopeless feeling, though it doesn't reach the levels of nihilism of Quentin Tarantino's competing snowed-in western The Hateful Eight.