This article contains ending spoilers for Metal Gear Solid V: The Phantom Pain. Read at your own discretion.

Hideo Kojima’s Metal Gear Solid V: The Phantom Pain is a stealth combat game, set in a shadow history of the 1980s in which revolutionaries, mercenaries, and terrorists vie for global power. The story, set in Afghanistan and central Africa, unfolds in just two vast environments which the player is free to explore. This flexibility extends to the missions, which, once accepted, drive the story but can be completed using a number of strategies. Stealth, brawling, assassination, artillery strike, wolf attack, and wormhole abduction. The player is allowed to choose if the protagonist, Big Boss, is a warrior or a phantom, and these choices are echoed back in the rumors swirling in the enemy camps, overheard as Boss slips by in the night -- unless he blows them up with a grenade launcher first. 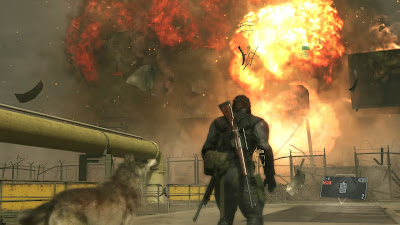 This action is superimposed on a story of vengeance. Big Boss’ idealistic mercenary organization seeks revenge against a rogue intelligence officer, Skull Face, who nearly killed the Boss nine years earlier as part of his own plot to avenge himself of perceived wrongs. Skull Face and the Boss’ lieutenants deliver many monologues on the subject of Boss’ rage, going so far as to give him a new code name, Venom Snake, to reflect the depth of his poisonous anger. 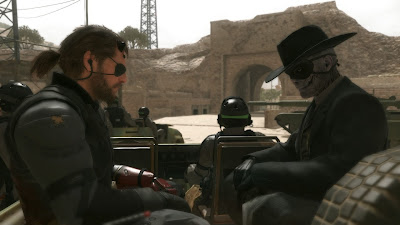 Big Boss himself, however, is notably silent about his supposed motivations. It is possible he is driven by anger, but it is equally plausible that he views Skull Face as a military rival, or as a threat to peace. Boss rarely speaks at all -- a quiet emphasized by the plot’s preoccupations with the virtues of silence. These are reflected both in the selflessness of the mute romantic interest, and in Skull Face’s belief in the imperialistic nature of language. Indeed, Big Boss is not only a man of few words, but almost completely without affect. His blank, slightly twitchy stare is continuously on display: in the title menu, in the mid-mission helicopter rides, and in the opening cinematic attached to every chapter of the game. This is not a failure of technology. The faces of other major characters are extraordinarily expressive; the face of Ocelot, one of Boss’ comrades, is quite beautiful in its realism. The lack of both speech and visual cues as to Boss’ interior state compliments the open gameplay, in which the player can choose if the Boss is ruthless or merciful, and in the most practical of terms. Will you spend your time rescuing endangered animals, or murdering guards for minor rewards? There is an incongruity between the player’s freedom to infer and act out the Boss’ morality, and the assumptions expressed by the rest of the game’s cast. In contrast to the beliefs of Skull Face, there is freedom in the game’s action, and its reality is not controlled by language. 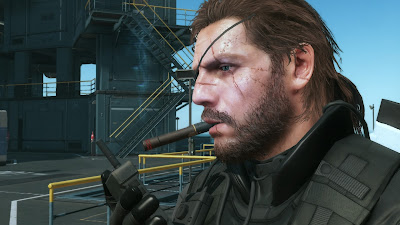 On the other hand, the plot structure itself does impose an interpretation of events on the player. Though he or she is free to make tactical decisions, the arc of the story is mostly unchanged by these choices. Every aspect of the plot is explicitly explained through monologue and third-party conversation, mostly in the form of audio recordings played as background during the game’s action. Motivations are spelled out, ambiguities are cleared; strange powers and inexplicable events are dismissed through excruciatingly detailed pseudo-science. This rigid control over the game’s interpretation reaches its climax in the final story mission. There it is revealed that the Boss’ identity crisis, set up in the opening scenes and apparently played out through the player’s moral choices, is not a personal or ethical struggle at all. Rather, it is direct psychological trauma. The protagonist was never the Big Boss of the earlier Metal Gear games, but is a disoriented coma survivor, given plastic surgery and coached into believing himself the Boss, a perfect decoy for the enemies of the real Big Boss. This is a bitter pill: not only were the events of the game a meaningless diversion, but all the freedom allowed the player was equally hollow. None of those choices were actually advancing the development of the character who has been at the center of the Metal Gear series for decades. 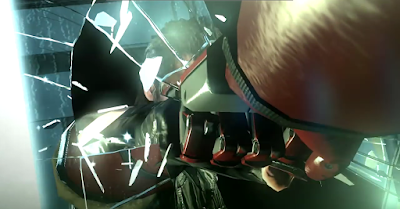 The ending is the triumph of dictation -- the story erases the choices of the player as he or she understood them. The sense of constraint is reinforced by a change in the style of play. Players are forced to relive the events of the game’s introductory chapter, repeating themselves while using simplified, tutorial-style controls that are noticeably constraining after playing with the game’s full mechanics for many hours. This seems to contradict the conclusion that there is freedom in action -- ultimately Skull Face is correct, and the words of others, in this case Kojima himself, are chains. 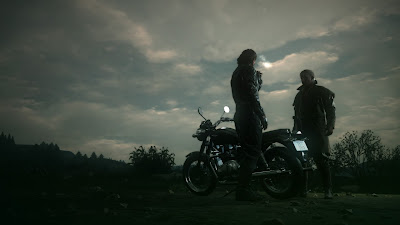 There is, however, a possibility of escape. The latter half of the game has an odd structure, in which all missions become optional and may be replayed infinitely; chapters become accessible out of order, and the method of unlocking them is never explained; the plot jumps back forth in time; and the final story mission is not the final mission overall. This jumble leaves the elements of the plot re-arrangeable and discardable. The player may follow the game’s ordained route through the story, ending on its sour note, or may choose to conclude with one of the game’s other stirring, late-game set pieces, many of which feel like traditional cinematic climaxes: defeats, victories, a tragic romance. “There are no facts, only interpretations”, the game quotes near its conclusion. Metal Gear Solid V tells us it is in control, but quietly suggests the story is in the hands of the player.
Posted by surlaw at 12:13 AM