Kirby and the Rainbow Curse (Wii U, 2015) - The Goodness of Gluttony 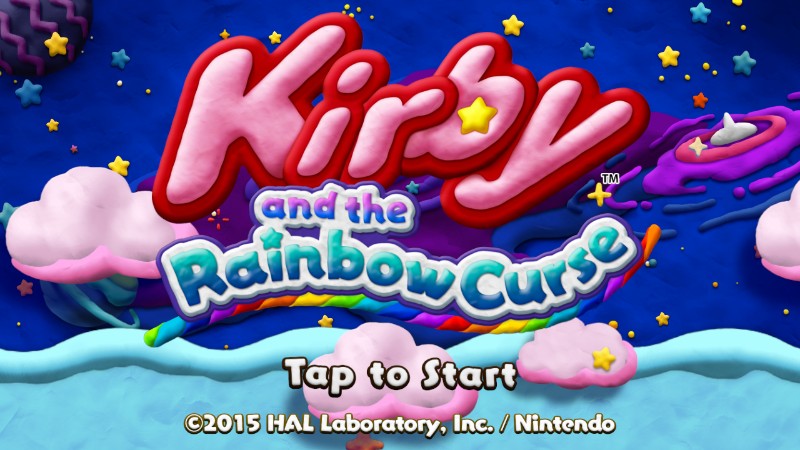 Nintendo's puffy marshmallow hero Kirby alternates between two types of games: Traditional platformers, like the Kirby's Dreamland series, Kirby's Adventure, and Return to Dreamland, and experimental spinoffs like Kirby's Dream Course, Kirby Mass Attack, and one of my personal favorites, Kirby's Canvas Curse. Canvas Curse, released on the DS in 2005, is one of the many Kirby spinoffs that turn the hero into a rolling ball. In this one, players guide his course using the touchscreen. Ten years later (an amount of time that feels staggering now; Canvas Curse doesn't feel like it was that long ago), Nintendo has released a sequel on the Wii U that offers more of the same, but when that content's this good there's nothing wrong with that.


Click here for a Kirby and the Rainbow Curse screen shot gallery.


Kirby and the Rainbow Curse shifts its focus from paint to clay, with almost every element of its world portrayed in really adorable claymation. It looks fantastic, animates well, and is wonderfully bright and colorful. The single player game plays exclusively on the Wii U tablet, with its touchscreen serving the same path-drawing purpose as the DS did in Canvas Curse. You don't need to use your TV at all, and in fact I found the game much harder to control when looking at my TV, unless you're playing multiplayer. While player one is always a rolling Kirby, players two through four control variously colored Waddle Dees using more traditional platforming controls. There are even some enemy encounters that only happen during co-op mode!
Rainbow Curse features seven worlds, each with three stages and a boss fight, and around 50 challenge rooms with various unlock conditions. Each stage has five treasure chests to find which unlock really great looking figurines/trophies to look at and tracks for a jukebox with over 120 songs to listen to. Players receive a bronze, silver, or gold medal on each stage based on how many stars they collect in addition to an overall high score, but since this is still Nintendo we're talking about, there's absolutely no way to compare your scores on a leaderboard. Once you've found all of the doodads in a stage, this game's replay value comes from finishing stages faster or with higher scores, so not having any kind of ranking is just purely dumb and completely unsurprising.


I love how this game handles its story. You've got a dialogue-free cutscene at the beginning showing our hero loafing around being a doofus until a pair of scary hand-monsters come through a portal and start eating up all the world's color. Kirby befriends Elline, a magical paintbrush-fairy, and they zoom off into space to win back the world's colors and get back Kirby's lunch. It's a silly, trippy story that never wastes your time and Kirby, Elline, and Waddle Dee are believable as buddies without saying a single thing. There's some good facial expressions and body language used here in spite of the simple clay art style, and it's filmed well. Makers of more cinematic games could learn something here.

At the end of each level, players can collect pages of Elline's diary to flesh out the story, but the main reason to try and get them is that they're just funny. You get to see bad drawings of King Dedede and Metaknight, diagrams of where everyone likes to chill, and lists of what each character likes to eat. It's endearingly goofy and genuine.


While the main game is easy, some of the treasure chests are hard to find, and some, obnoxiously, require you to restart a level if you mess up and miss them, repeating a lot of content. Exploration is satisfying and the simple controls (draw lines to guide Kirby, tap him to make him dash/attack enemies, hold the stylus on him when you get 100 stars to make him get huge and rambunctious) work very well, aside from some minor awkwardness when moving around underwater. Kirby can turn into a tank, a submarine, and a rocket in certain stages to add variety to the game, but these parts feel slower than the main stages. The challenge rooms get pretty tough, mostly because of their extremely strict time limits. If you just want to get through the main game and ignore the side content, it will only take you a couple of hours, but I've spent about 10 hours so far on Story Mode and the challenge rooms and I still have a lot of stuff to unlock.

My only real complaint (aside from lack of leaderboards) is that while Canvas Curse had King Dedede and Metaknight as unlockable characters, Rainbow Curse forces you to buy Amiibos of these characters if you want to use their special abilities. As in Canvas Curse, Metaknight is faster and blows through weak enemies quickly and Dedede has more health. Unlike Canvas Curse, Kirby just gets Metaknight's mask/Dedede's hat instead of actually becoming those characters. You can use the Amiibo powerups once a day instead of getting a whole new play style. I don't own any Amiibos and while I don't have any problem with tying them to cosmetic unlockables, it's disheartening to see content from the previous game gated behind paid figures.

Kirby and the Rainbow Curse is a good start to the Wii U's 2015 after a pretty phenomenal year in 2014. It's one of the better Kirby games out there and one of the most charming games I've seen in a long time. There's a ton of love put into this one, and it really shows. If you don't mind games being a bit easy and like adorable clay monsters, this one's heavily recommended.