When it comes to indie games, the roguelike is currently one of the most popular styles. Featuring heavy randomization of stages/items/characters and often including permanent character death, it's an unforgiving style of game that crosses genre boundaries and rewards truly dedicated players who've learned their systems inside and out.

While I understand their appeal, it's not the style for me. Careful stage design and item distribution, from Super Mario Bros to Metal Gear Solid to Dark Souls, is something I love in a game. It's one of my favorite aspects to examine, and one that I'm continuously trying to improve in my own games. I've played plenty of roguelikes and given up after a couple of runs, as I didn't feel any sort of reward for continued play, even when it's a game whose core mechanics I enjoy, like Spelunky.

When I first downloaded Rogue Legacy, a game that mixes the castle exploration and action-platforming of a modern Castlevania title with the randomization and punishing difficulty of a roguelike, I was apprehensive. I'm happy to say that I really had a lot of fun playing through it, in spite of my initial wariness.

Cellar Door Games' Rogue Legacy drops a weak knight into a hostile castle full of skeletons, angry paintings, and eyeball monsters with the expectation that this first character will quickly die. In each progressive attempt at conquering the castle, players get to choose one of three (later six) descendents of their dead hero, each of whom keeps all of the ancestor's weapons, armor, and unlocked abilities.

The castle shifts (though you can pay a character to make sure it stays as it is) and the heroic heirs feature random stats and character classes (three initially, with more to unlock) but there's still a sense of permanence to the game that makes failure feel like less of a waste of time than I usually get from roguelikes. You get to keep your gold until you begin a new run, bosses stay dead, and you're constantly unlocking new gear that carries over. Even when I failed a run unusually fast, I still felt like I was slowly getting somewhere. It makes the game easier than most of its cousins, but it also makes it a more enjoyable experience for people like me.

Another thing worth praising is the game's control. I never once felt hampered by cheap or unresponsive controls, and I was able to pull off some nutty moves trying to evade my enemies. Many indie platformers have poorly weighted and sloppy control, so it's really awesome to see Cellar Door knock this aspect out of the park. Combat and platforming both feel great. You have basic sword attacks and a series of magic spells, some of which are much better than others. There's a ring of fire spell that protects you and absolutely ruins bosses if carefully placed, and while it feels a little overpowered it's very satisfying. More weapons beyond a sword would have been fun, but there's always potential for a sequel. Players can equip up to five special abilities to make the game easier, also adding a decent element of customization to cope with all the randomness.

Graphics are mostly good, though fewer purely palette swapped enemies would be welcome. The bosses are large and colorful and the four main castle environments are clearly distinct. The soundtrack is pretty great too. Your knight's walking animation is more of a bizarre dance, which was off-putting at first but funny by the end.

There were a couple of times I felt annoyed (some of the jokes about your heirs' genetic traits are pretty dumb, sometimes I'd generate six heirs that were almost all terrible, some room layouts just weren't fun at all, and the overwrought writing at the end doesn't match the game's tone) but overall I was impressed. I'd still prefer a carefully laid out, handcrafted castle, but what's here works well enough. The first boss gave me more trouble than anything in the game, so that's an obvious stumbling block for new players, but once I got into the game's groove I felt totally comfortable. The high speed, high damage, minimal defense Shinobi class was my favorite to use.

I'm glad I gave this game a shot and look forward to what these guys do next. In spite of the random elements, Rogue Legacy is a mostly balanced, well designed game that only rarely feels like it's wasting your time. 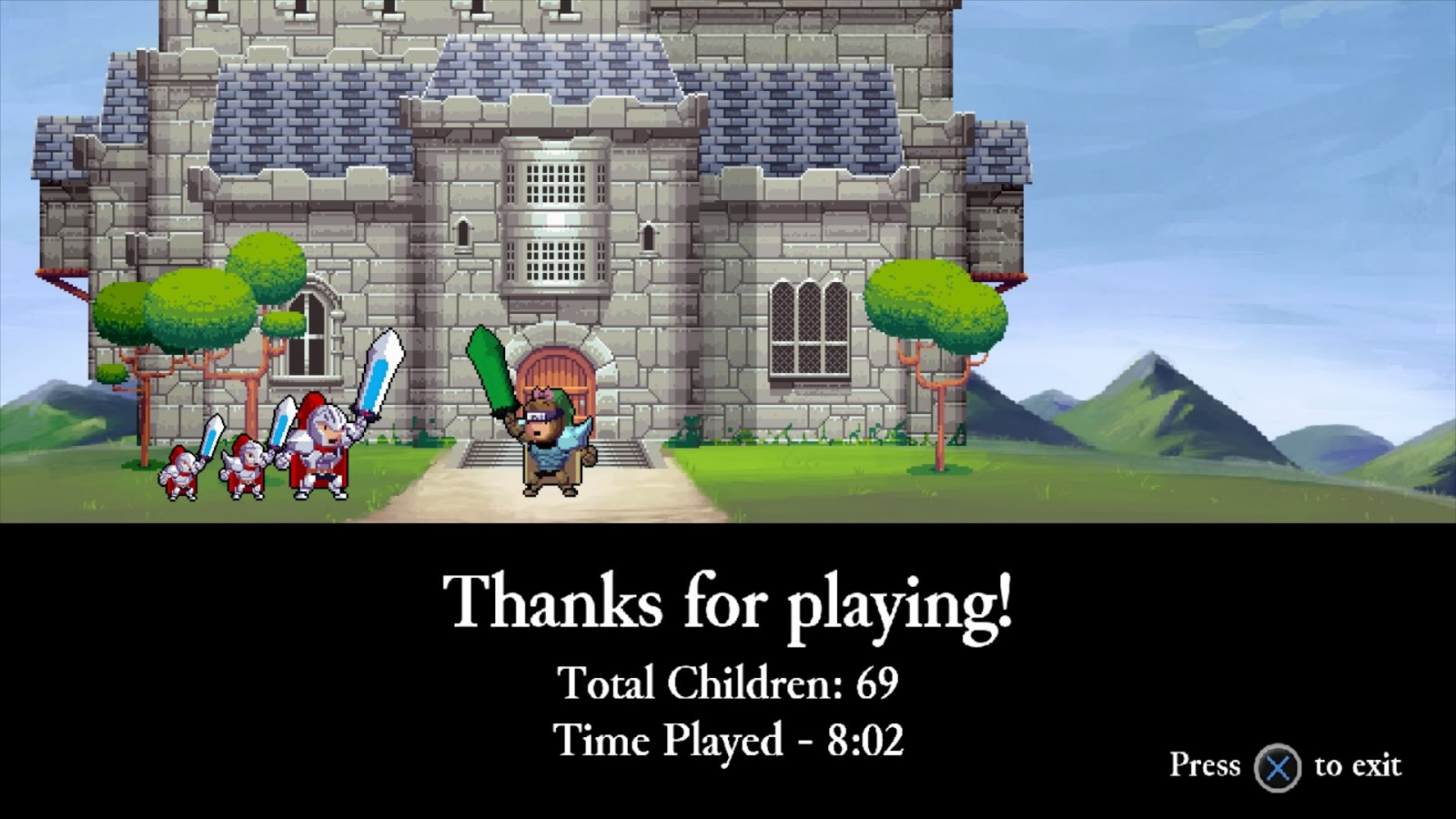