Captain Toad: Treasure Tracker (2014, Wii U) - The Trouble with Turnips 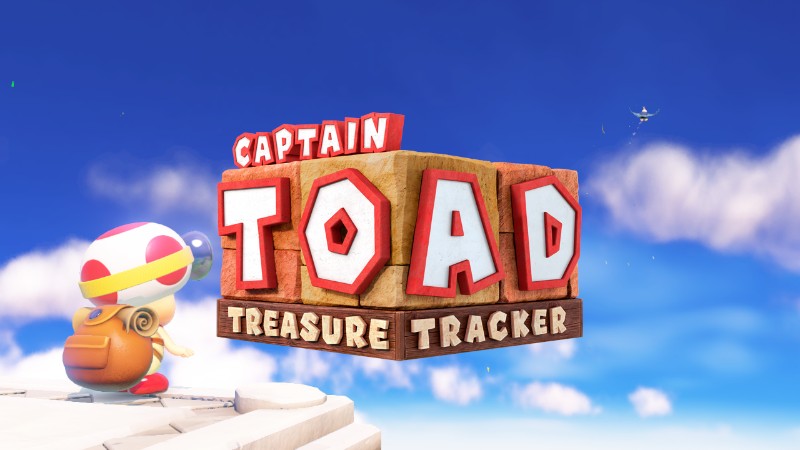 In 2013's spectacular Super Mario 3D World, Nintendo introduced a series of short puzzle levels starring Captain Toad, a mushroom-man who made his debut in Super Mario Galaxy in 2007. While the main game focused on platforming and bouncing off of enemies, the Captain Toad stages featured a hero without any means to fight back and with a backpack so heavy he couldn't even jump. In each of these levels, players would collect a series of stars while navigating small, cubic stages. Captain Toad: Treasure Tracker takes the concept behind these mini-stages and expands them into a bigger, prettier adventure with a few little frustrations. 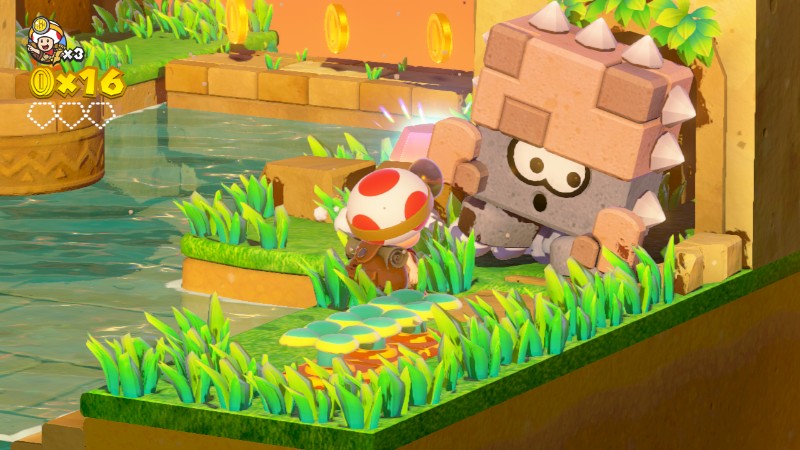 Captain Toad features almost 80 stages, with the bulk of the game divided into three "books." Each book has its own opening, title screen, and end credits, which makes it feel like this was originally going to be an episodic title sold in three parts. There's a story here but it doesn't really matter; Captain Toad and Toadette are looking for treasure and one of them gets kidnapped by a giant magic crow monster depending on which book you're playing. You can't freely select your character and there's no cooperative mode, even though the game could have worked nicely as a co-op title in some specific stages.

Each stage has a gold star at the end and your objective is simply to reach that star, which is fairly easy. The game's challenge comes from collecting three hidden gems scattered in each main stage and completing an optional objective (don't take damage, finish the stage with X coins, don't be spotted by enemies, etc.) These tasks are pretty easy for the first two books, but things get tougher in the third, and some of the Bonus Levels that you unlock after the main game's over are much harder. If you have a Super Mario 3D World save file, you can also unlock a couple of stages from that game. They've been slightly remixed to account for Captain Toad's inability to jump.


This game keeps track of your coins earned per stage, but in typical Nintendo fashion, features no online leaderboards with which to compare your scores with other players. This is something that would have added a nice competitive element to the game, even if it were only used in the minigame stages, where the entire point is coin collection.

Captain Toad gets a couple of power ups: The Double Cherries from 3D World return, allowing Toad to split into multiples, and a pickaxe appears in some stages that can be used to break blocks and defeat enemies. While using it, the Hammer Time music from Donkey Kong plays. I got hyped every time. Toad's other means of defense in this game are stealth, dropping from ledges onto enemies, tricking enemies into hitting each other, and the occasional Super Mario Bros 2 turnip, plucked from the ground. He's not as helpless as he was in 3D World, but he's still pretty meek. I'm happy to see Mario 2's Shy Guys pop up as common enemies, too.

This game can only be played using the Wii U Tablet, and features a few annoying bits related to that. Some platforms only move if you blow into the microphone, which was never fun, and the camera can be controller by either using the right stick or tilting the controller. Unfortunately, you can't turn the motion controls off, so more than once I'd die because I shifted in my seat while moving, causing the camera to veer off the path and put me in a blind spot. The camera is my biggest complaint; the motion control is sloppy and you only have two options for zoom: Way too close and way too far. The only part of the game that used the tablet's abilities that I actually liked were a couple of moments where the game becomes a first person shooter via minecart ride, as Captain Toad fires turnips at enemies and blocks. I loved these scenes and they were a ton of fun to play in a rotating chair. The rest of the tablet functions I could do without.


Captain Toad is a cute game with great art and music that features some nice puzzles and a mostly relaxed atmosphere. It's not something I wanted to play for hours, but it's great for just chilling out for a little while at a time. It's not on the same level as Mario 3D World, but it's still a lot of fun and well worth your time if you're interested in small, exploration-based puzzle games. I've still got about a third of the game's bonus goals to finish, but I'm not in a huge rush to get to them.