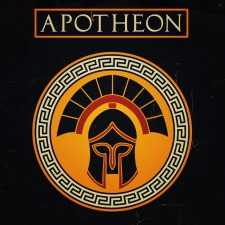 Alientrap's PS4/PC platformer Apotheon is a pretty game with visuals based on the style of classic Greek pottery. Sombre music plays as Nikandreos, a mortal chosen by the goddess Hera to strike down Zeus, wanders Mount Olympus looking for ways to save humanity/avenge his fallen allies. And then blood starts flying everywhere and bad guys rush at you yelling dull, generic video game bad guy talk. It's a game in the midst of an identity crisis, which isn't helped at all by its incredibly awkward combat and puzzle solving.

When it's a quiet game focused on exploration, Apotheon is pretty nice. It's appropriately moody when you're not fighting, and I loved the way it looked. The problem is that the majority of the game isn't like this. I would be ok with sloppy combat or sloppy puzzles, but not both. Most puzzles are just "find X things" or "hit this switch," but it becomes a pain when you're sitting there shooting a dozen arrows at a switch fighting desperately against the game's controls.

Players move the hero Nikandreos with the left stick and aim his sword/spear/axe with the right stick. L2 holds up a shield, R2 swings your sword. X jumps and Circle performs a dodge. To play this game as a fast-paced action game, you need three thumbs. Otherwise, you're going to have to settle with awkwardly marching back and forth poking enemies to death while aiming a targeting reticule for a close range melee weapon. It's just needlessly awkward and isn't very fun. It feels like the developer tried to combine Dark Souls with a Castlevania title and didn't understand why either of those series work.

Apotheon is set in an open map in the style of Metroid and modern Castlevanias, but there's no reason to revisit old areas unless you want to earn trophies. You get a couple of new abilities, but none are used to access previously inaccessible areas, and since weapons decay very quickly in combat there's no sense of reward in finding new, cool stuff. You don't earn any significant rewards from non-boss enemies and just waste your weapon's durability, so there's no reason to not just ignore most of the combat encounters, especially since they're so unwieldy.


The game's writing is pretty weak. Since some people complained, there are spoilers below in the next two paragraphs. I don't think they matter because it's a game that barely has a plot and doesn't have any meaningful writing. The story is a fairly generic "Go kill the Greek Gods" tale that's been dumped on us by the God of War series for a decade and to no surprise whatsoever there's some big twists and scheming going on here that goes over Nikandreos' head. He's a completely faceless character with no dialogue or body language, but that's better than the grunts he fights, who yell "KILL KILL KILL" and "I'LL RIP OUT YOUR GUTS" for a few hours. Like the blood splatter everywhere that clashes badly with the rest of the game's visuals, this kind of stupid writing clashes with the game's lofty, theatrical dialogue in cutscenes. Unfortunately that dialogue's not very impressive either.

I have no idea what this game wants to be. The combat is incredibly shallow but overly complicated, with a targeting system it doesn't need and dozens of weapons with few significant differences. The boss fights are decent, puzzle-style fights, but once you figure out a boss's trick you've got to repeat it for ten minutes while you wear down their health and some spend half the fight running away from you. The story isn't dumb enough to work as camp and isn't good enough to take seriously. I do like that it ends with your guy growing huge a la Ultraman before punching out Giant Zeus and turning into the Christian God and building Adam out of clay. That's the kind of stupid I appreciate.

I think I'm harder on the game than I would be otherwise because it's incredibly buggy. As of this review's date, this game should not have been released in this state. It's desperately in need of further patching, in spite of having a day one patch. In the eight hours it took me to finish, it hard-crashed to my PS4's home menu  no less than once an hour, I got stuck inside of walls at least five or six times (sometimes killing me, sometimes forcing me to reset the game), some boss names cover half their health bars, and the incredibly bloated inventory screen has text that covers up some of your inventory. If you swim too deeply in certain areas you die without any indication that you're too deep or that this is possible, since you can breathe indefinitely in other places. The physics are ludicrous, with heavy hits sometimes doing nothing to you and small hits sending you hundreds of feet into the air. The sailing section of the game is pointlessly repetitive and slow, with more time spent watching the game load than moving from area to area.

I got my copy of Apotheon free through PS+ and it kept my attention long enough to finish it, but it's not a good game and I wouldn't recommend buying it. It coasts entirely on style without doing any one thing particularly well, and by the time I was done I didn't feel like seeking out the rest of the game's optional stuff. I appreciate that it was made by a very small team, but that's not an excuse for its problems. There's also a local multiplayer combat mode that I can't imagine touching.