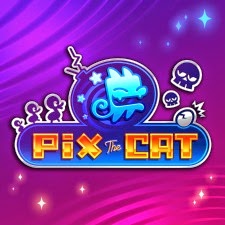 What happens when you take the loud, colorful dot-munching frenzy of Pac-Man Championship Edition, marry it with the ever-growing claustrophobia of Snake, and throw in a dash of the bird-saving heroism of Flicky? You get Pix the Cat, an exciting, frustrating, and stylish new score attack game by French developer Pastagames, the developers of the well received mobile title Rayman Jungle Run.

Pix the Cat is the third title starring its titular blue cat hero, who debuted in the 2012 title Arkedo Series: Pixel! and continued his adventures in Pix'n Love Rush. Pix the Cat is the most refined of this trio, offering four distinct game modes. 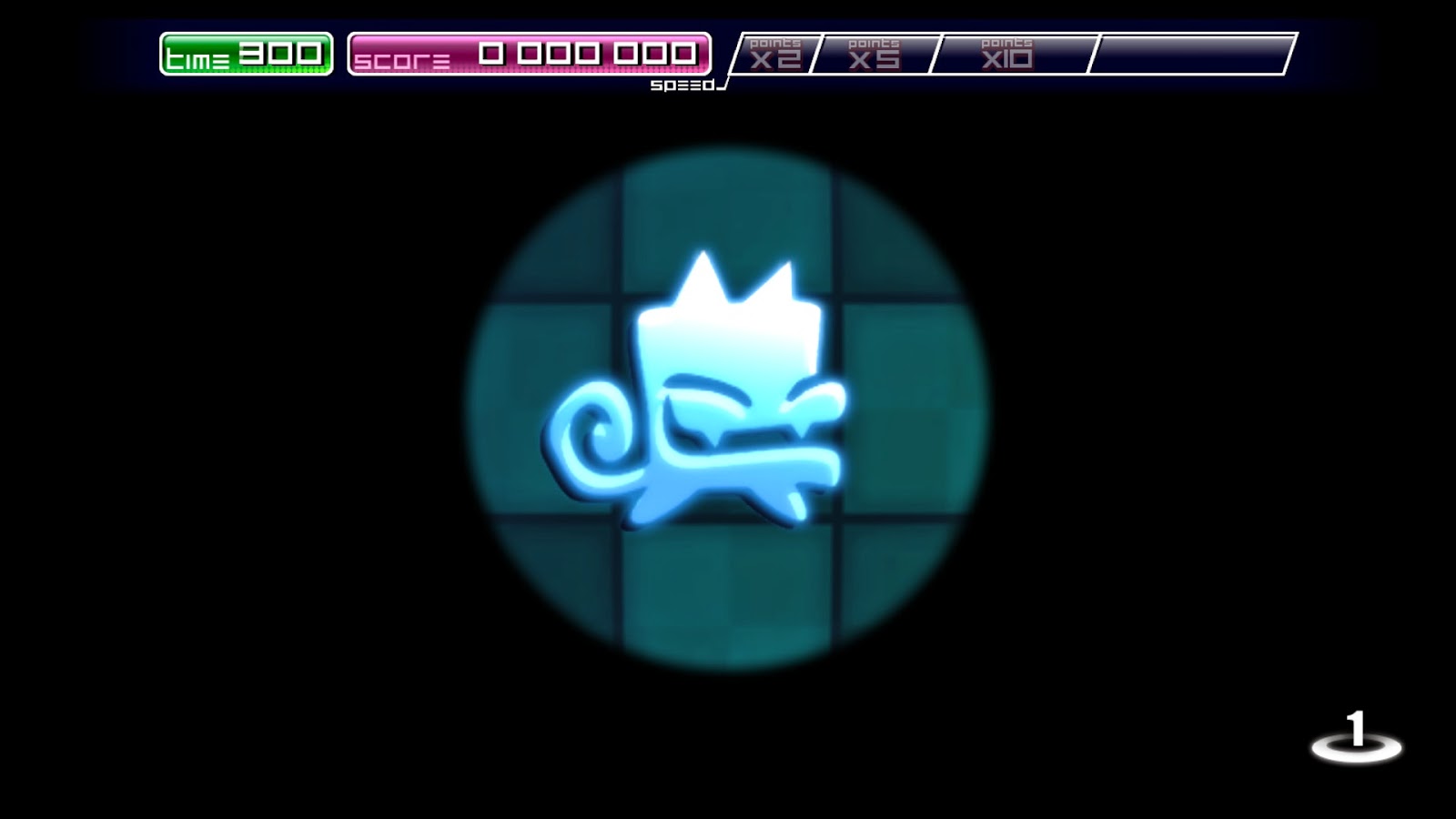 The main game play is the Arcade mode, where players control Pix, who moves like a slipperier Pac-Man, as he collects a series of eggs, hatching them into cute ducks. The ducks must then be safely deposited into their homes while players avoid hazards, enemies, and trapping themselves with their own trail of ducklings. In order to get a perfect score on a stage, players must gather every egg in a stage before depositing a single duck. Once every duckling is safe (or destroyed, if you run into an enemy) Pix can dive deeper into his digital world's massive mainframe. As you go deeper, things get faster and deadlier, and as your combo grows, you eventually enter Fever Tme, a psychedelic nightmare world in which scores rocket up, enemies can be destroyed, and the controls get even touchier. 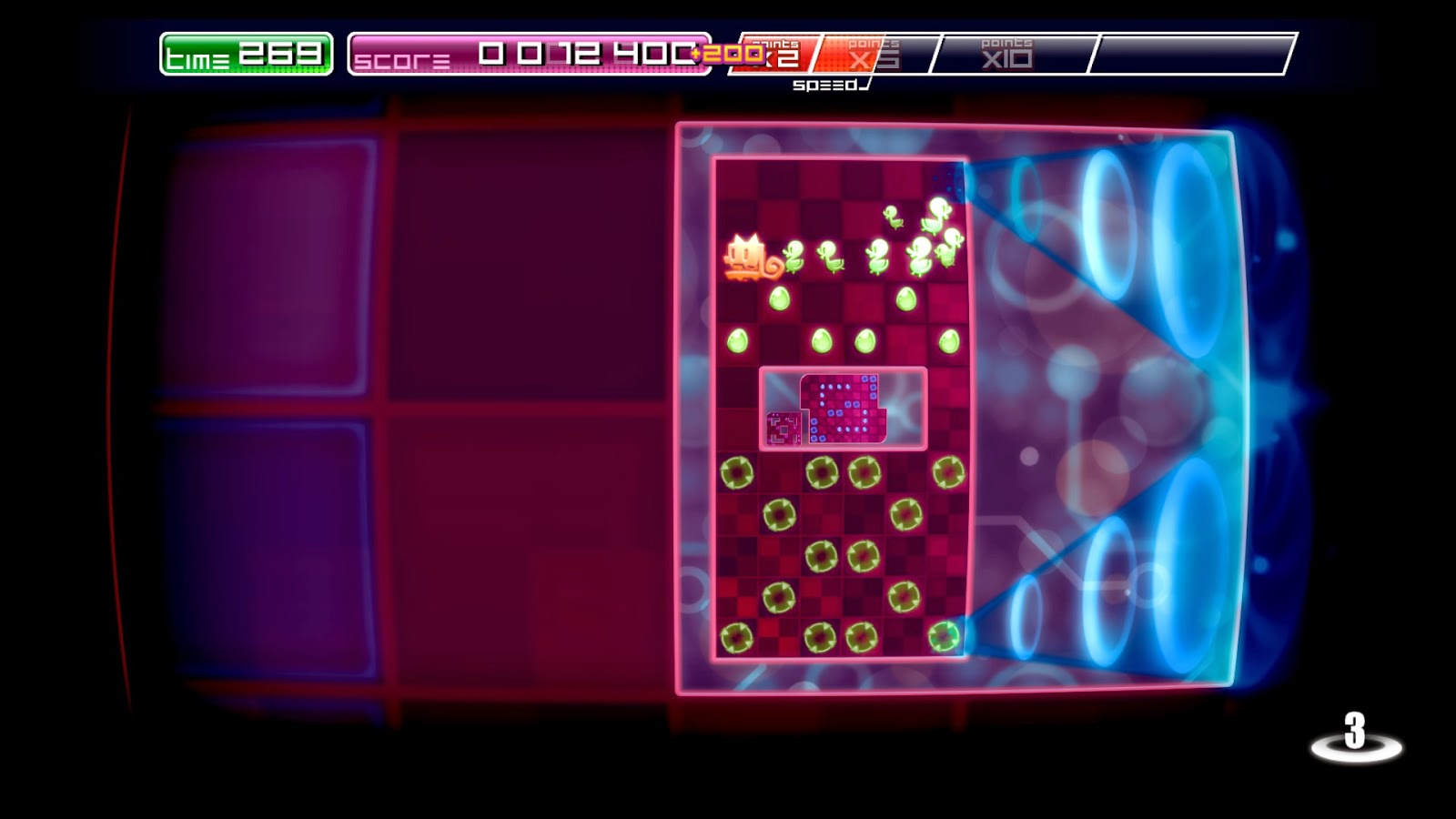 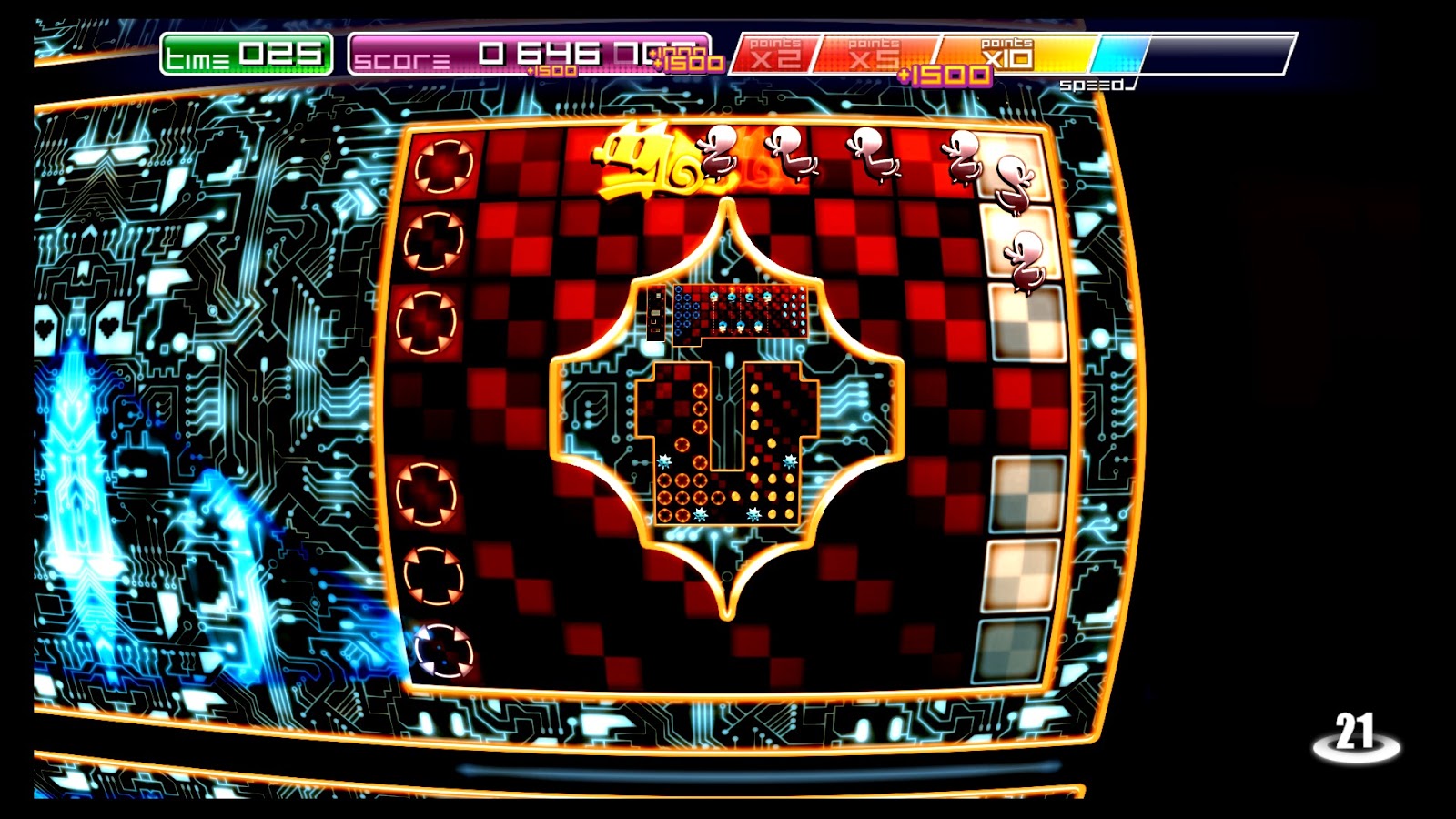 Arcade mode's pretty solid. Fever Time is exciting and nutty and most of the maps are well designed. Like Pac-Man CE, there's a time limit for each round, and you've got to get the best score you can before it runs out. My only beef with this mode is that the game's other maps and modes are locked behind score thresholds which are far too high for players just starting out. I'm good with locking bonuses and trophies behind high scores, but it seems pointless to lock the game's main content behind scores that will intimidate and scare off some players. Even after hours of play, and a high score that's ranked around 200th place on the world leaderboards, I still can't get a high enough score to unlock the game's final Arcade map, though I've come extremely close. 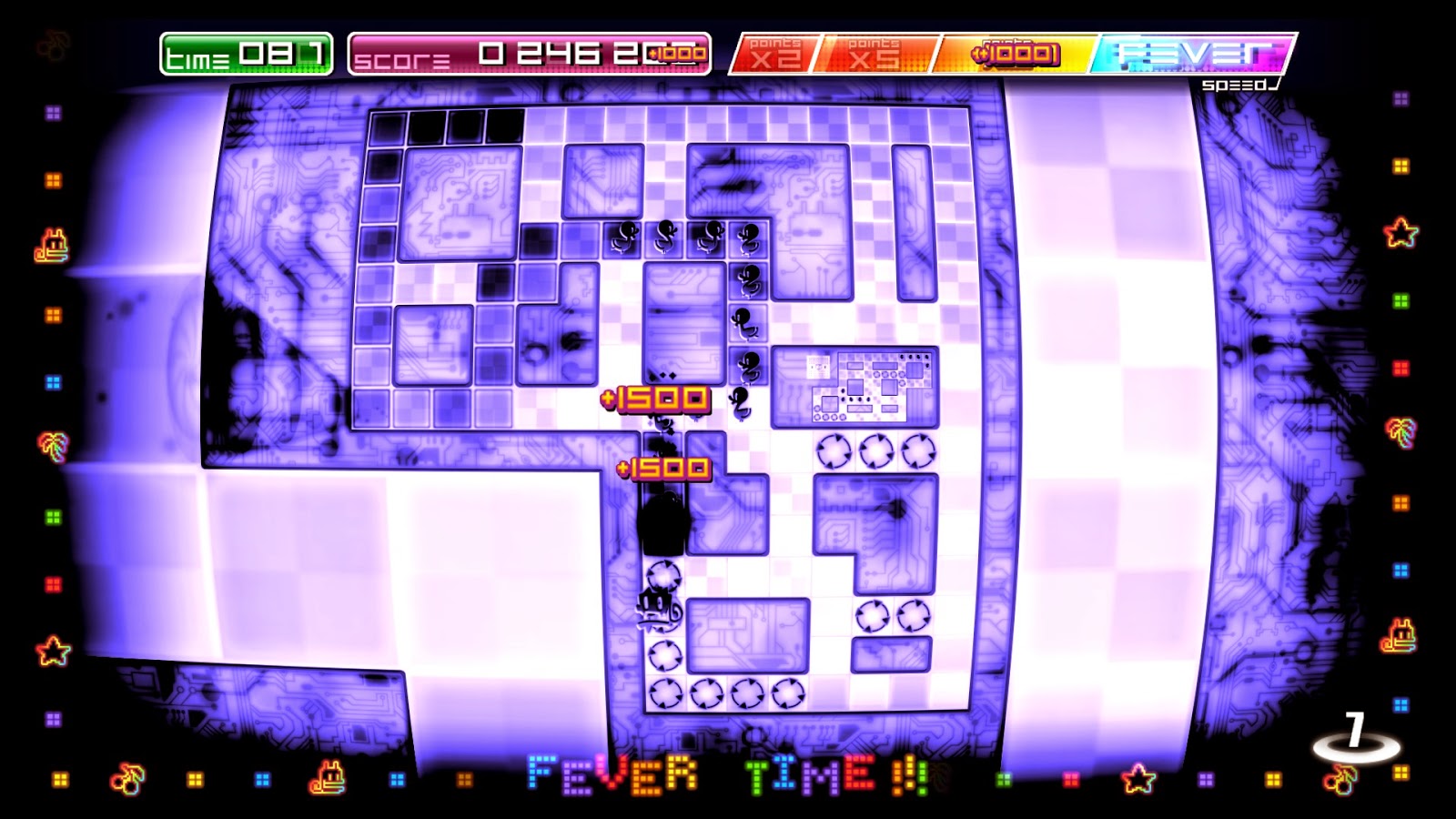 The first new mode you unlock after playing through the Arcade mode a few times is the Laboratory. This is a completely different game, and is a puzzle game focused on sliding puzzles in which you guide cells/bubbles to their home instead of ducks. Unlike Arcade mode's relentless madness, Laboratory is a slow, methodical game where your goal is to take your time and complete each room in as few moves as possible. There are 100 total puzzles, and new mechanics are introduced every 10 stages. The difficulty curve is well done, with things starting out simple enough but eventually becoming quite challenging. If you fail to finish the stage in the right number of moves, you can still finish it and progress, but you won't score a bonus on that stage. This is a fair system. 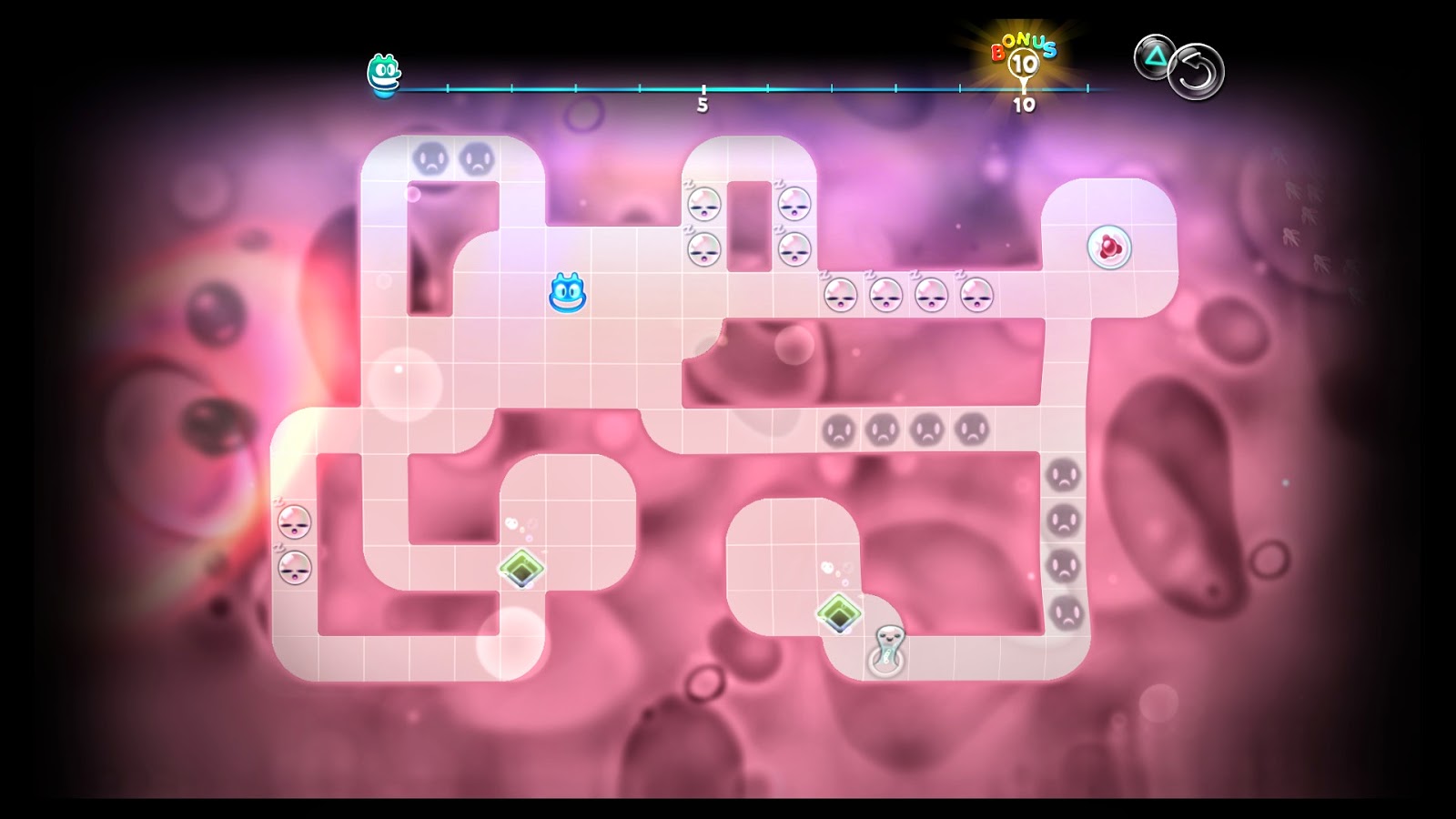 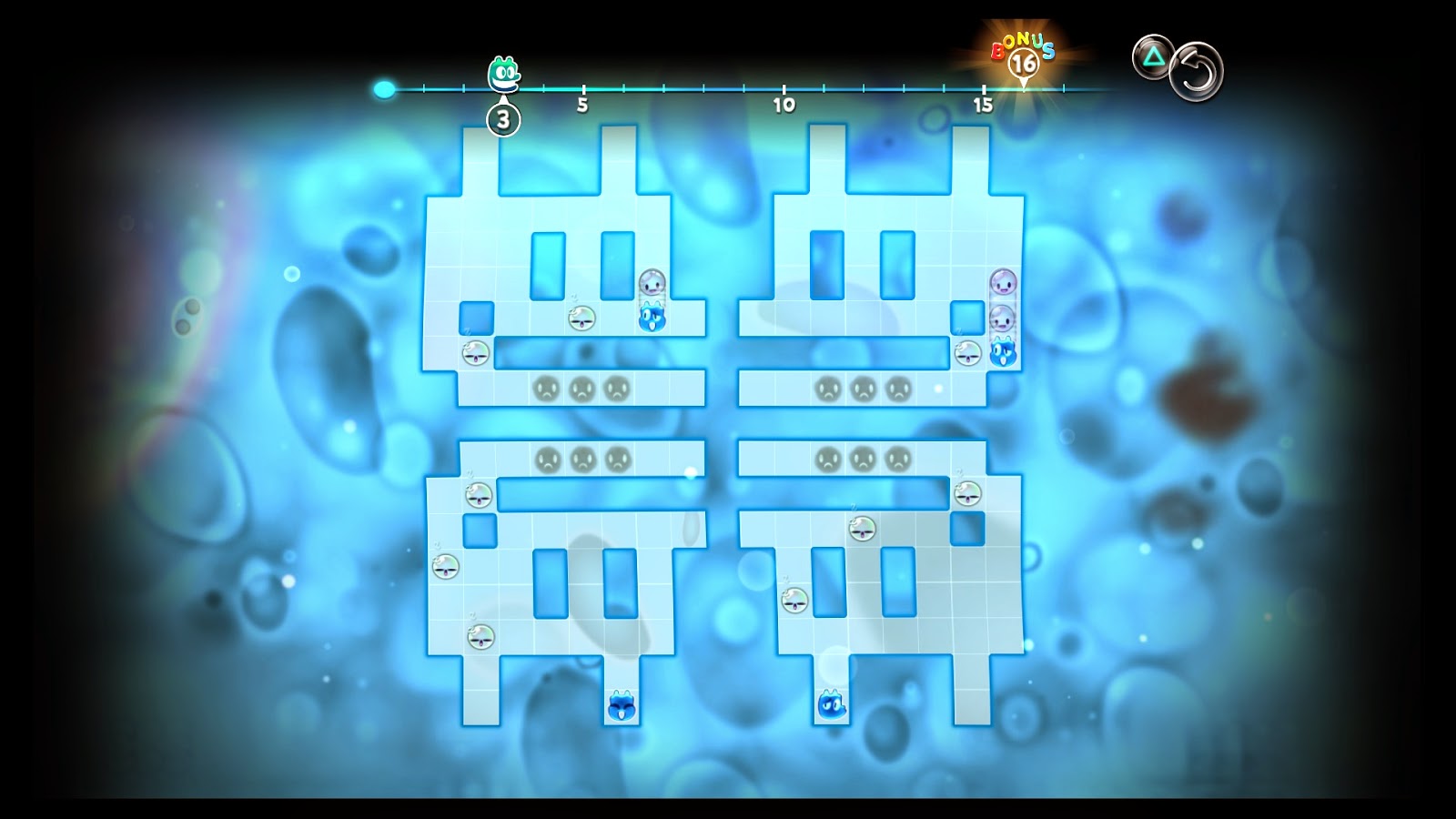 The next mode, Nostalgia, is my personal favorite. This mode looks awesome; it uses black and white Steamboat Willie visuals and old timey piano music that's bouncy and memorable. In Nostalgia, Pix must collect every egg in a stage, but there's no way to deposit the ducklings. The stage ends when they're all hatched. Because of this, your trail of ducks grows massively in some levels, sometimes making simple movement a huge task. This mode features some very well designed maps (50 total) and a whole bunch of new hazards and helpers not found in Arcade mode. It's the best part of the game, and it's a huge shame that it's hidden behind a pretty high score threshold, ensuring that some players will never play long enough to see it. Nostalgia is Pix the Cat at its best, and it should have been unlocked from the start. 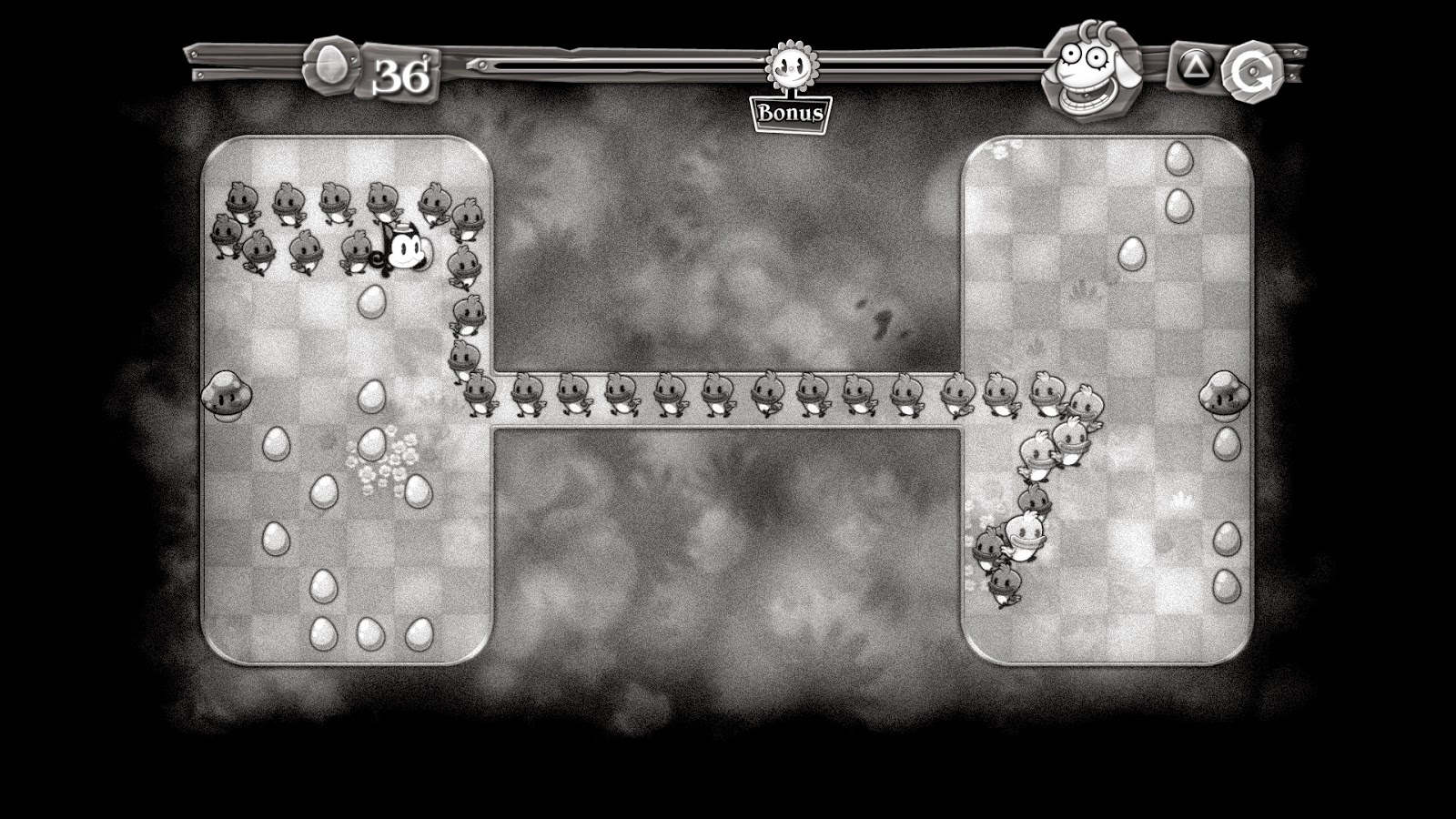 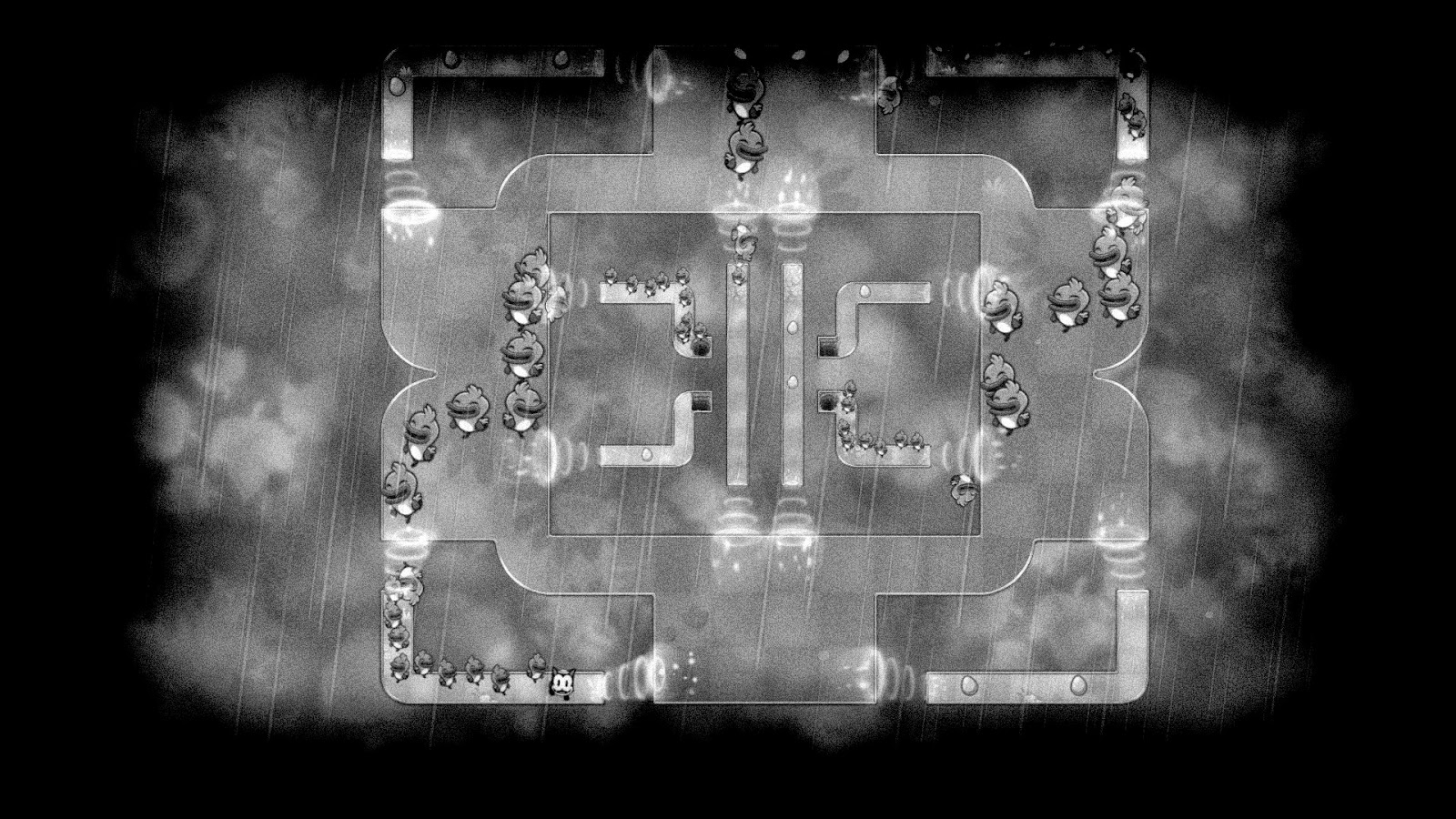 Finally, there's a multiplayer Arena mode, but it's for local play only. I have yet to try it, and wish it had an online matching system. For a game that cost more ($16.49 at launch, though free for PS+ members) than most PSN indie games, not having any online options in its multiplayer is a downer.

As you accomplish goals in the game's various modes, you unlock alternative announcer voices (Russian Robolady is my choice), some music, and an art gallery with some nice pictures. These are better unlocks than stages. 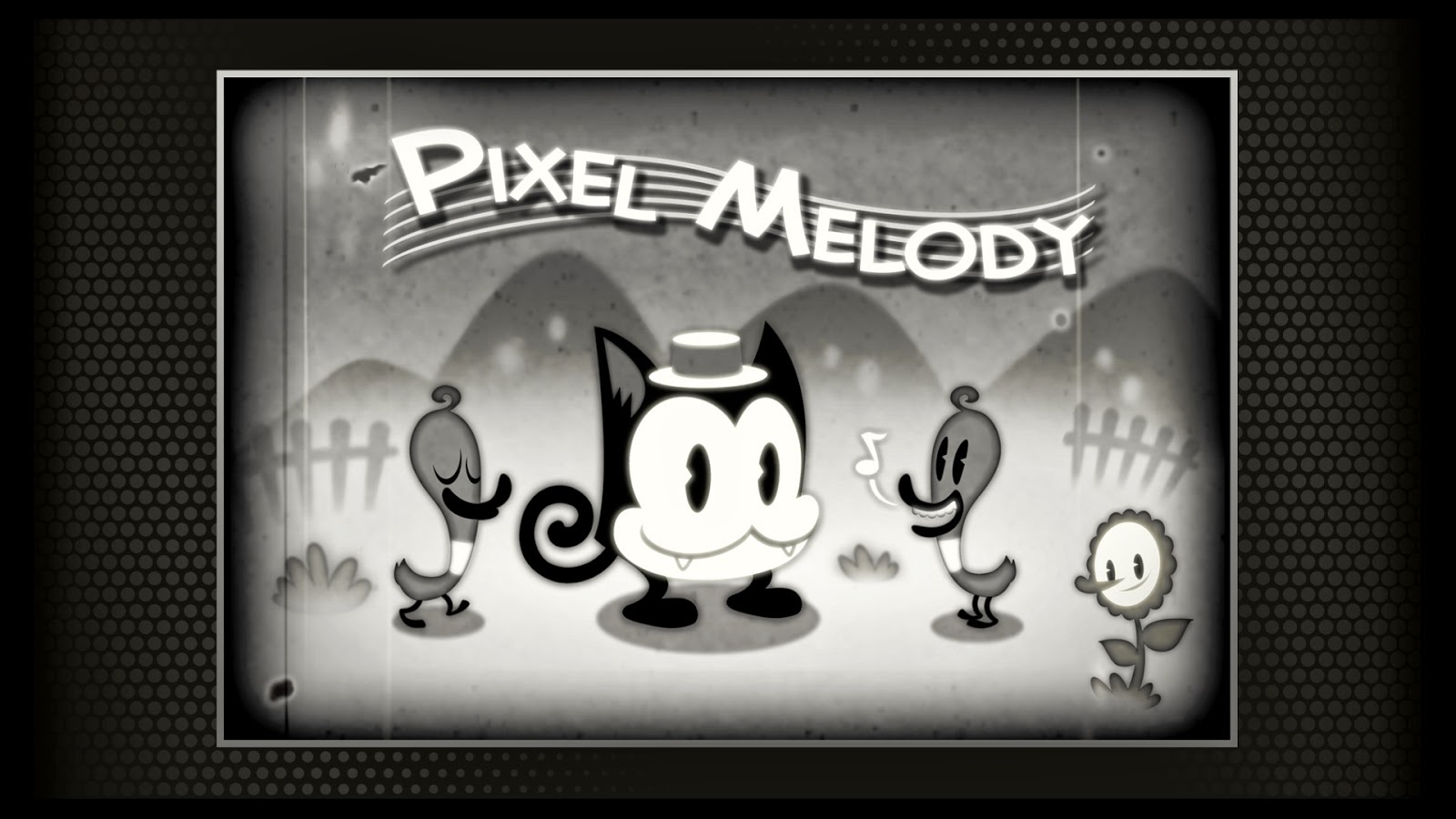 Pix the Cat is one of the best exclusive arcade style games on the PS4 right now, beaten only by Housemarque's perfect Resogun. It should probably be patched to make unlocks a little easier, the price is high if you're not a PS+ member, and controls aren't as tight as they should be (you're going to slip up much more than you would in Pac-Man CE) but in spite of all that, it's a great new arcade game with a ton of content that's perfect for quick play sessions. The game is available on both PS4 and PS Vita, and buying one version gives you a copy of both. I'd personally love to see an actual, custom made Pix the Cat arcade cabinet. 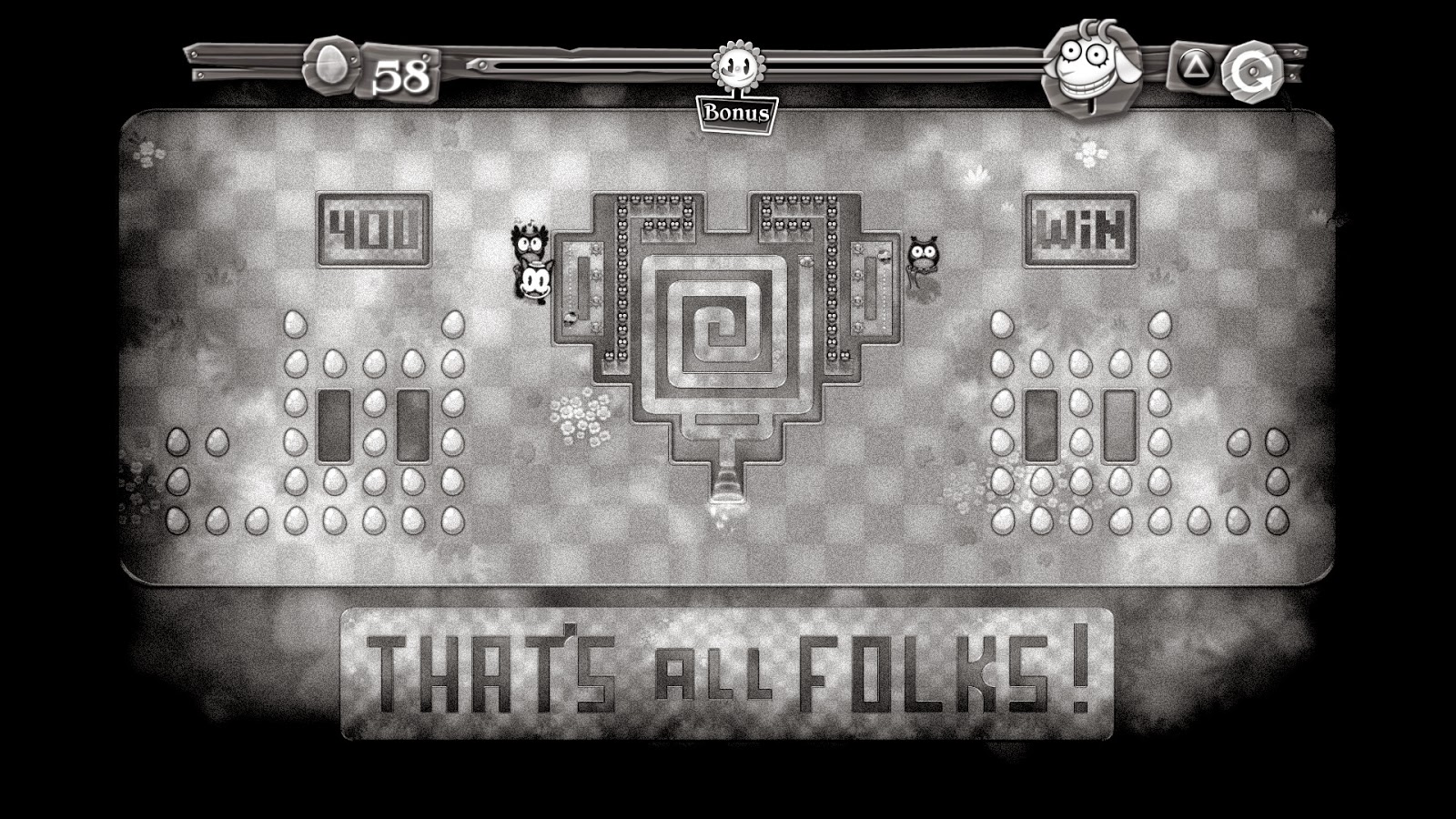