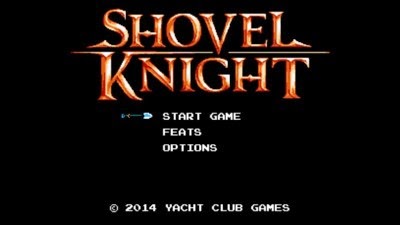 Three years ago, Sean Velasco of WayForward Technologies founded Yacht Club Games, a new gaming start up that earned a great deal of attention through a massively successful Kickstarter campaign for its first title, Shovel Knight. Released June 2014, Shovel Knight is a retro 8-bit style platformer that captures the spirit of classic gaming with some modern quality of life improvements, and does so with plenty of personality.


Shovel Knight is a platformer that takes inspiration from some of the best: A world map is reminiscent of Super Mario Bros 3, platforming and abilities that feel like a classic Mega Man game, pogo-stick styled attacks straight out of Duck Tales, and troublesome shielded knights that feel like they stepped out of Zelda 2. 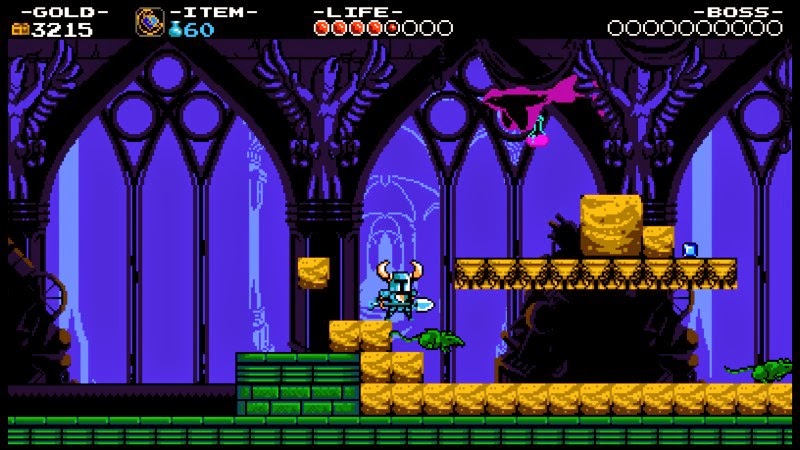 Players control a blue knight who fights using a trusty shovel which can be used to smack down enemies, bounce off their heads, or dig into objects. In each major stage, players can find and buy a new ability and must face off against an team of eight knightly bosses known as The Order of No Quarter. As in Mega Man, they all follow a name scheme, so instead of fighting it out with Guts Man and Snake Man, Shovel Knight tests his strength against foes like Plague Knight and King Knight. 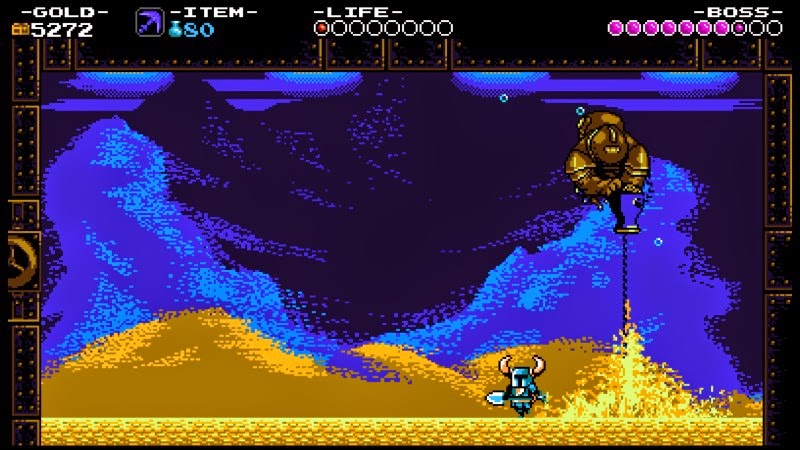 There are a few optional missions and extra bosses as well. For the most part, these side missions are more challenging than the main game, and are the only parts that require you to use the abilities you purchase. This makes the abilities feel more detached from the main campaign than the abilities in a Mega Man game, but at least each is unique and useful in their own ways. Treasure found in the game's stages can be used to upgrade your gear and buy health/magic upgrades in town. 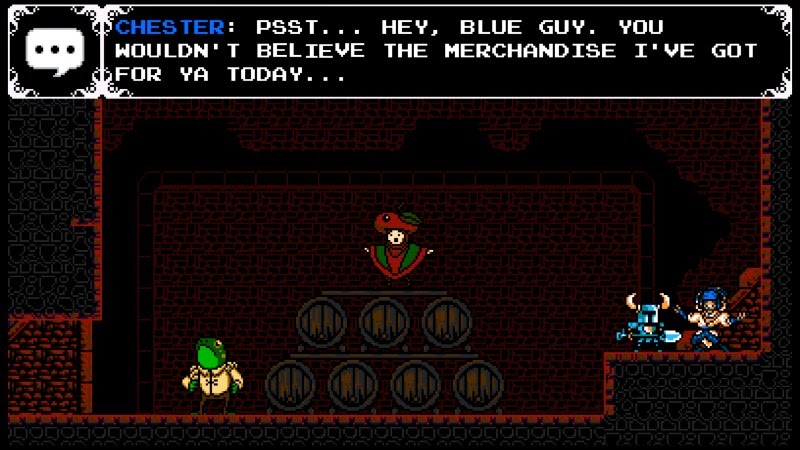 Shovel Knight is a much easier game than most of the games that inspired it, and this isn't necessarily a bad thing. It's nice to see an indie platformer that can be played and enjoyed at all skill levels, without demanding perfection, and New Game + offers a greater challenge. There are no lives, and instead you lose part of your collected money on death. Taking inspiration for the Souls series, your lost money remains in the spot where you died, and if you're careful you can make your way back and reclaim it. 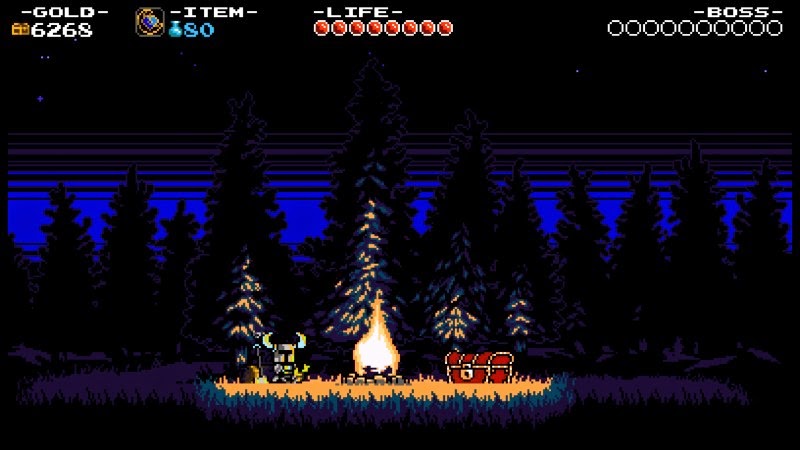 The one difficulty spike is, weirdly, in the game's middle rather than its end. Propeller Knight's stage isn't anything ridiculous, but it's notably harder than anything else that comes before or after, and was the only stage where I had a high death count. The difficulty curve also gets screwed up a bit once you get access to a friendly fish-monster that can provide you with two free health restoration potions on each visit, free of cost. This option is nice to have, but it really needed to have SOME cost associated with it. The Phase Locket, which makes you immune to damage for a little bit, is also massively overpowered. 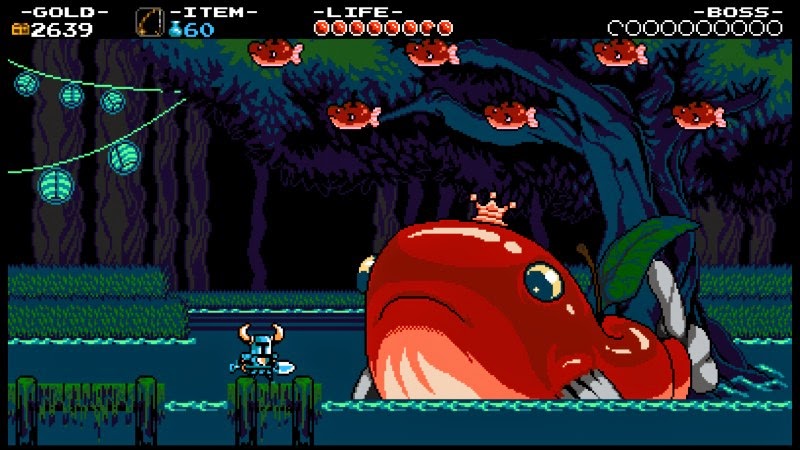 Another Souls-style feature is exclusive to the Wii U version. Using the system's Miiverse feature, every room in the game is filled with messages, hints, and drawings left behind by passing players. You can view these on the tablet as you play, and some offer very helpful hints on finding the game's secrets. Most are pretty useless, but it's still a very fun feature to have.

WayForward's games are known in part for their phenomenal soundtracks, and I'm happy to see Yacht Club continuing that tradition. I often find modern attempts at recreating old school style video game music uninteresting, as most composers can capture the form of the genre but completely miss that it's the composition that makes Mario and Mega Man music so good, not the fact that it's made of blips and bleeps. Thankfully, Shovel Knight features two massive talents: WayForward regular Jake Kaufman and Capcom composer Manami Matsumae, who made her mark on the world with the soundtrack to the very first Mega Man game. Shovel Knight's soundtrack is catchy, well composed, appropriate to its stages. Perfect all around. 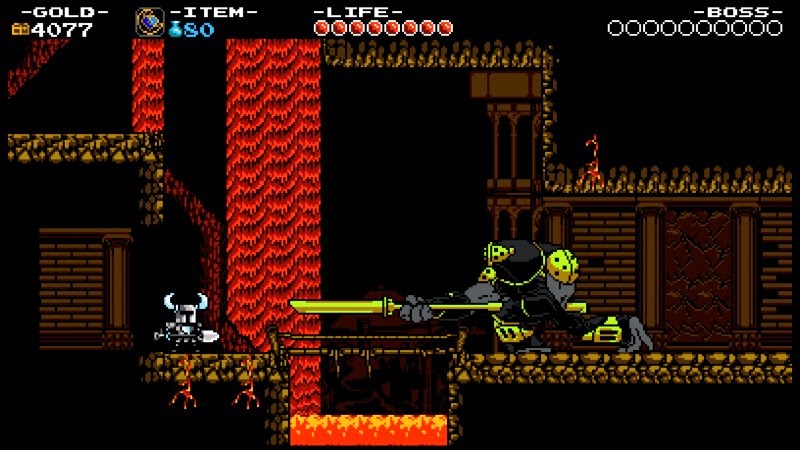 The 8-bit style graphics in Shovel Knight are fine, though some areas look much nicer than others. The game features some very pretty forests and towns, but also a very ugly laboratory area. My problem with some of the game's graphics mostly comes down to palette choices; in sticking fairly closely to 8-bit graphic rules, some areas just feel bland and flat, while they should feel alive and cartoony. Having a green wall covered in other green objects of the same shade is accurate to old games, but it's not pleasant. 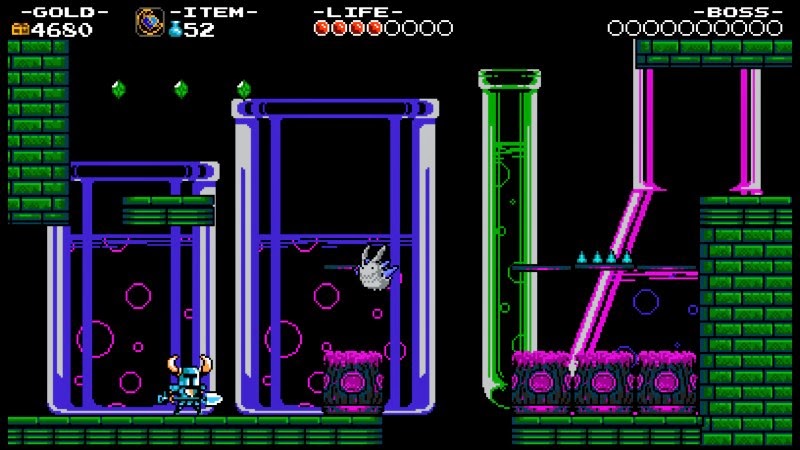 Honestly, while the graphics aren't bad at all, I kind of wish Yacht Club hadn't gone with the retro look. After seeing how nice cartoon graphics could look in indie platformers like Guacamelee! and WayForward's own DuckTales HD, I'd love to see the world of Shovel Knight come alive with the wonderful hand-drawn art that can be seen in the game's press kit. I understand the appeal to nostalgia by going 8-bit, but I'd personally rather see something closer to that. A game animated and drawn as well as DuckTales HD that used art like Shovel Knight's concept art would be gorgeous! As it stands now, it looks like any number of other indie platformers, albeit higher in quality.

Shovel Knight's story is unobtrusive, its humor is pretty funny (I love the Pun Frog and the Anti-Pun Toad) and its character designs are charming. While many indie games are coated with winks and sarcasm, Shovel Knight feels authentic and never embarrassed of what it is. There's no out of place, over the top gore, there's no poorly conceived hidden message, and there's a constant sense that the people who made this game really loved what they were doing. Shovel Knight is short enough to be easily replayable, but not so long that it ever feels repetitive. 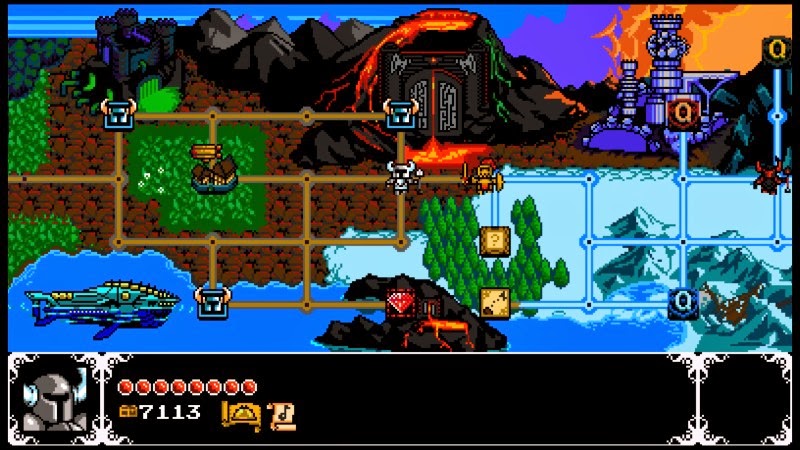 There are a few little things I'd definitely like changed (Fully customizable controls, for one; the Wii U Tablet has eight main buttons, let me use more than three of them. Let me use L and R to shift through my abilities) but ultimately Shovel Knight's just a pure, fun experience. I hope it gets a sequel that smooths out some of the rough spots, because while it's very good and stands well above its peers, it's still got enough bits that I think could be improved. And I still really would like to see a hand-drawn version of the game.
Posted by surlaw at 7:11 PM