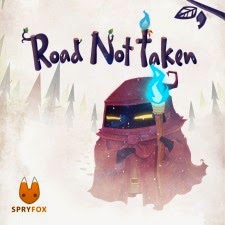 Road Not Taken, named for the 1916 Robert Frost poem, is a game by developer Spry Fox that hits on a whole host of fashionable indie gaming trends: You've got cute, hand-drawn graphics, procedurally generated puzzles, dry, detached humor, subtext about failed relationships, a crafting system, a steep difficulty curve, and permanent player character death. In spite of being made from an indie gaming soup, Road Not Taken still feels pretty original. Unfortunately, its charm runs out pretty quickly.


Players control a nameless Ranger, a hooded wanderer that feels like a combination of a Final Fantasy Black Mage and the pilgrims from Journey. The Ranger winds up in a snowy mountain village where children go missing yearly in the deadly forest outside of town, and it's up to him to rescue as many children as possible every year until the day he dies. Players guide the Ranger through 15 stages, one for each year, as the game counts down until death. You can pay to use checkpoints, but if you use them, you lose all of your possessions, making later parts of the game even more difficult. 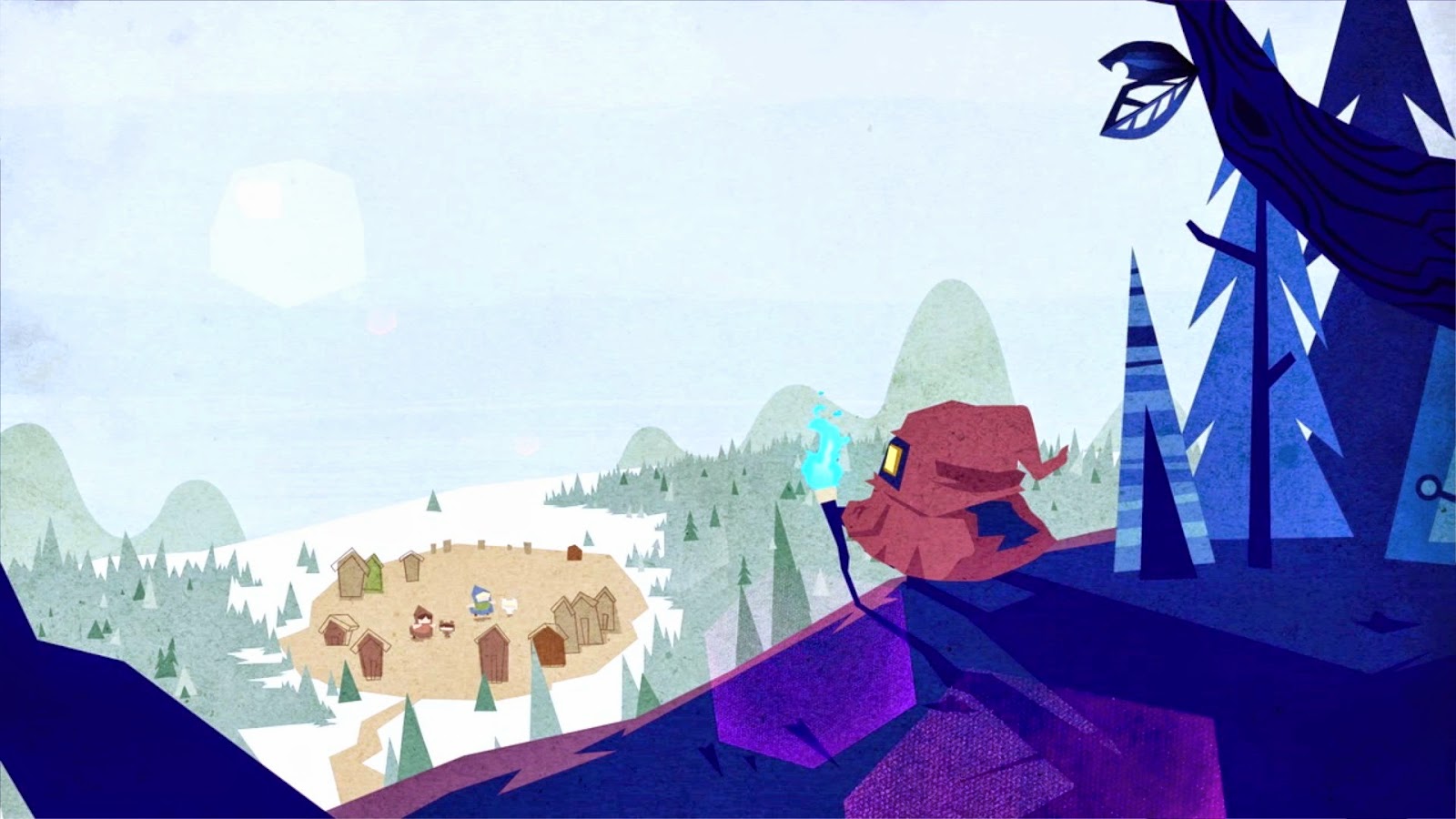 At its core, Road Not Taken is a series of block pushing puzzles. Players can drag objects around grid-based rooms or toss them around. Dragging them consumes stamina, as does touching prickly objects, attacks from monsters, or severe cold. Your stamina depletes quickly, and can be restored by rescuing children or finding/crafting food. Once it's gone, you're dead, and you're back to the beginning, though any items you didn't currently have equipped remain in your house for the next Ranger to use. 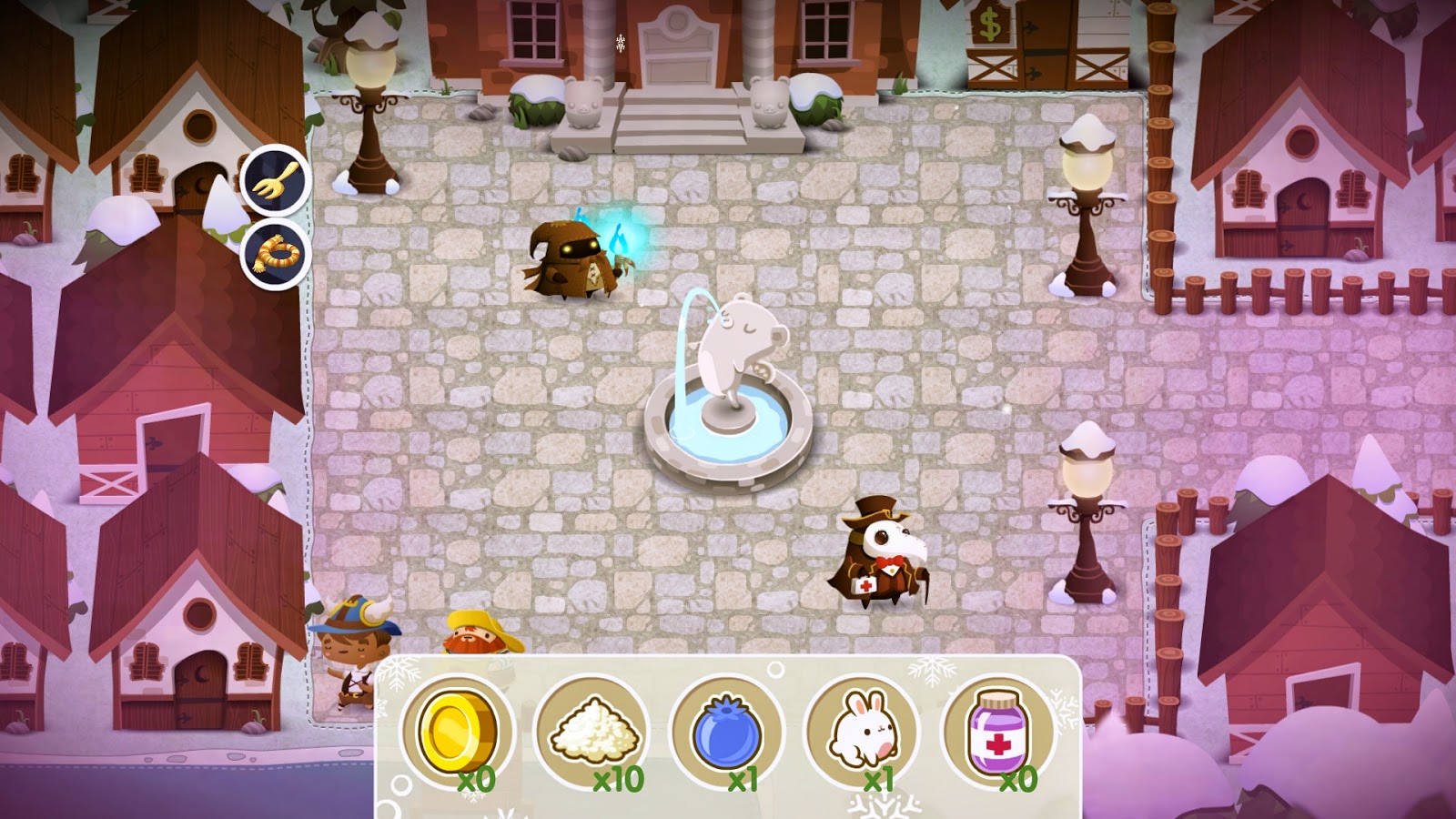 To progress from room to room, players must line up specific, like objects, as instructed by the game's locked doors. Since the majority of the game's puzzle rooms are randomly generated, this can either be effortlessly easy or infuriatingly hard, and not in a fun way. I would have greatly preferred straightforward, made-by-hand puzzles that were carefully constructed and got harder in a logical way as the game progressed. The random generation adds to replay value but at the cost of clever, fun stages. For the first four to six stages, it's not a problem, but later maps dump so much on you that getting anything accomplished feels like either a chore or an impossibility. 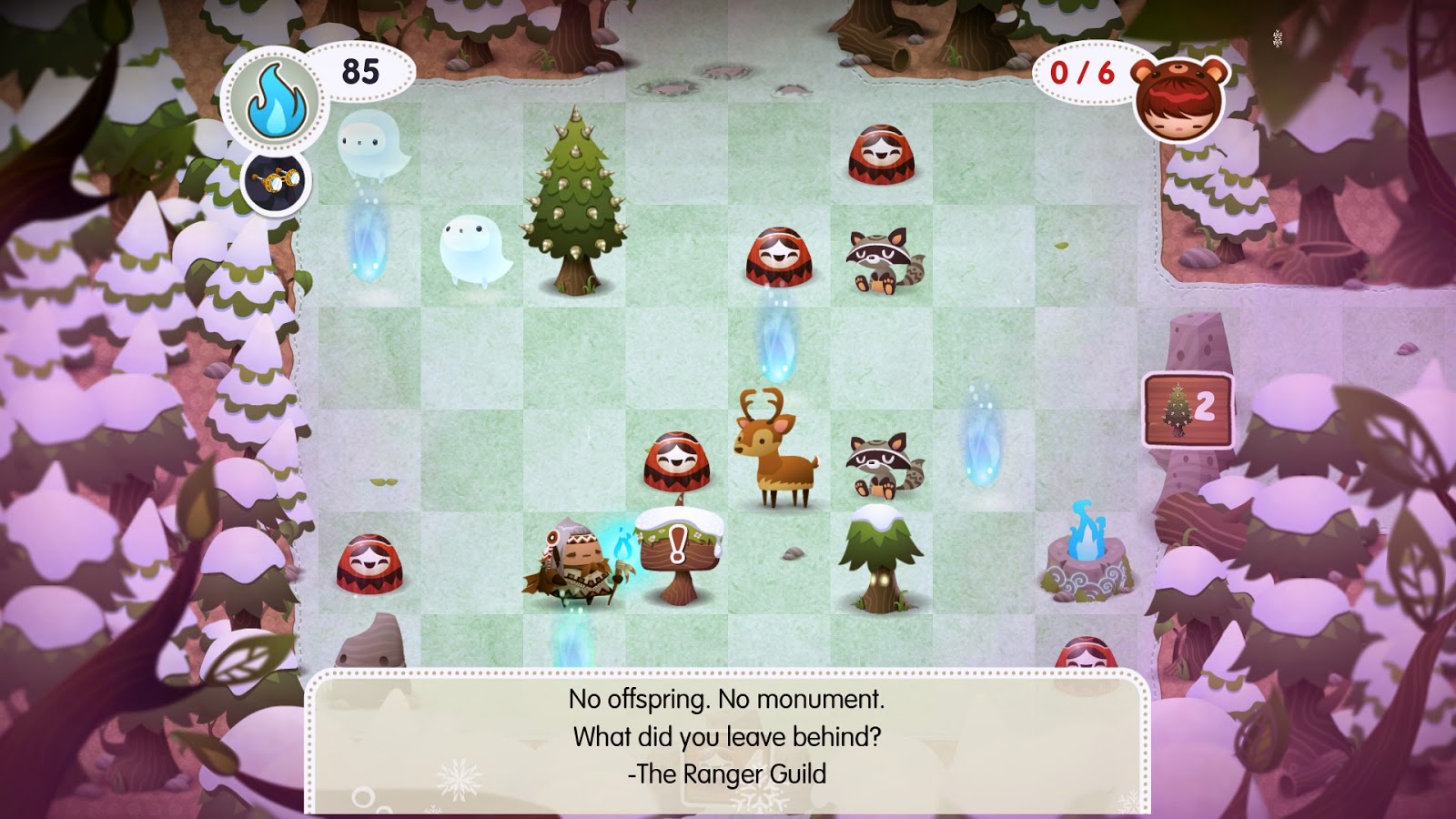 Some puzzles are made easier through crafting, but the crafting system is rarely logical. Sure, throwing an axe at a tree to craft a log makes sense. Throwing logs together to make a fire (which warms you and prevents stamina depletion in that room) makes sense. Throwing a broken vase at a cat to repair the vase does not. Throwing TWO broken vases together to craft a stool certainly does not. You're given an extensive (but unsortable) recipe book, but until you've memorized the game's fairly dumb item combinations it's all a matter of luck. 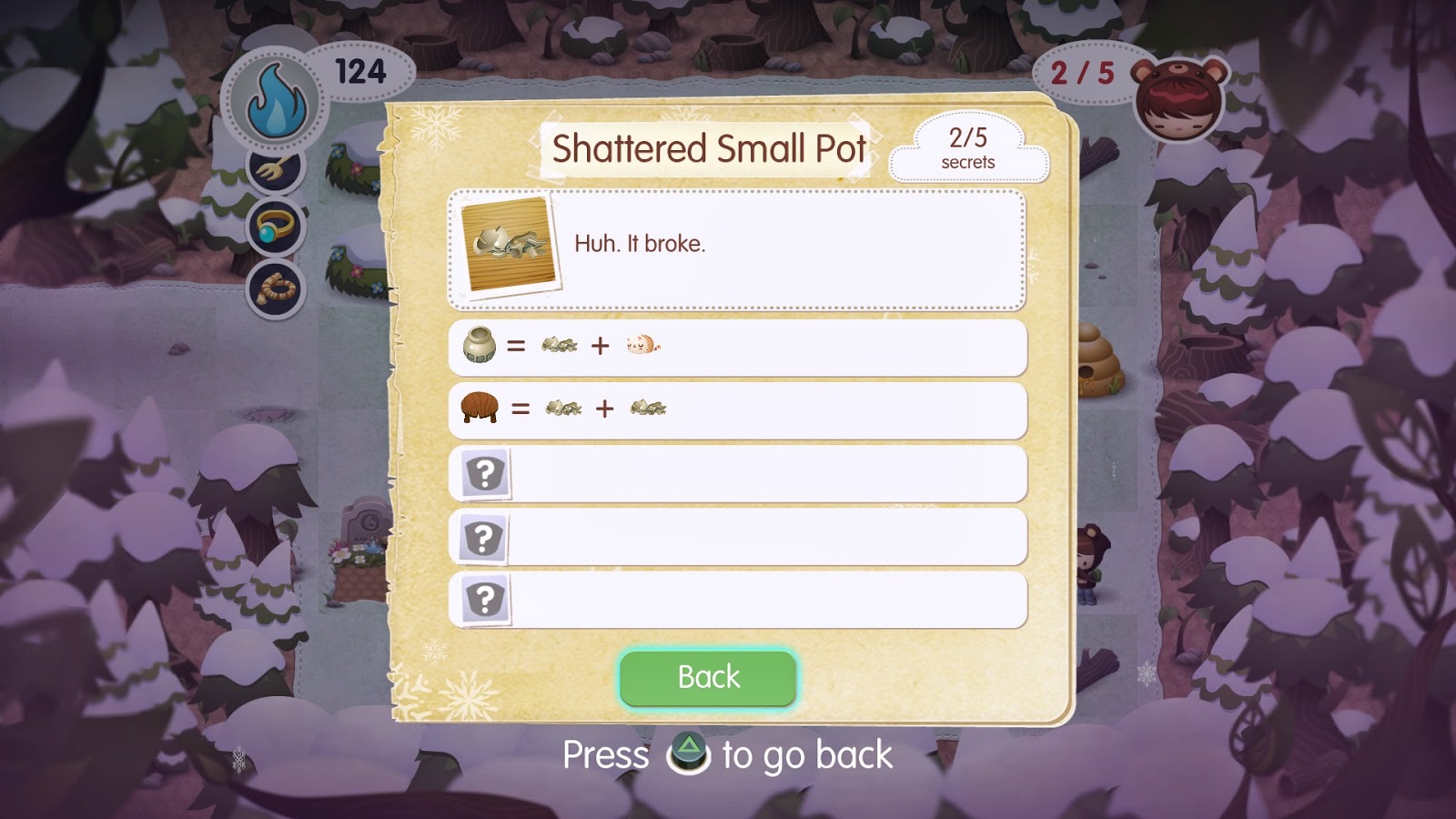 When you're not out searching for lost children, the Ranger gets to go around town and befriend the locals. You can give gifts found in each stage in order to woo the town's small population, but there's no thought process behind what to give them. If you want them to like you, give them the items highlighted in green. If you want them to dislike you, give them the items highlighted in red. The game doesn't trust the player to figure this out on their own via dialogue context, while at the same time presenting a massively obtuse crafting system. Befriending the mountain folk earns you equipment to make your life easier or harder as well as the option to ban certain objects from the forest.

Throughout the game, players find sign posts giving hints on how to play and how to live. You'll be repeatedly and bitterly told that a career, marriage, and children are the only roads worth taking. There's no possibility of a happy ending here, and as the game goes on you're chided as a failure if you haven't completed these goals. Ghosts appear to tell you to give up. It's a dark undercurrent beneath the game's cute visuals, but in the end it's not deep enough to feel like much. Mostly, it feels like a writer lashing out after a breakup. 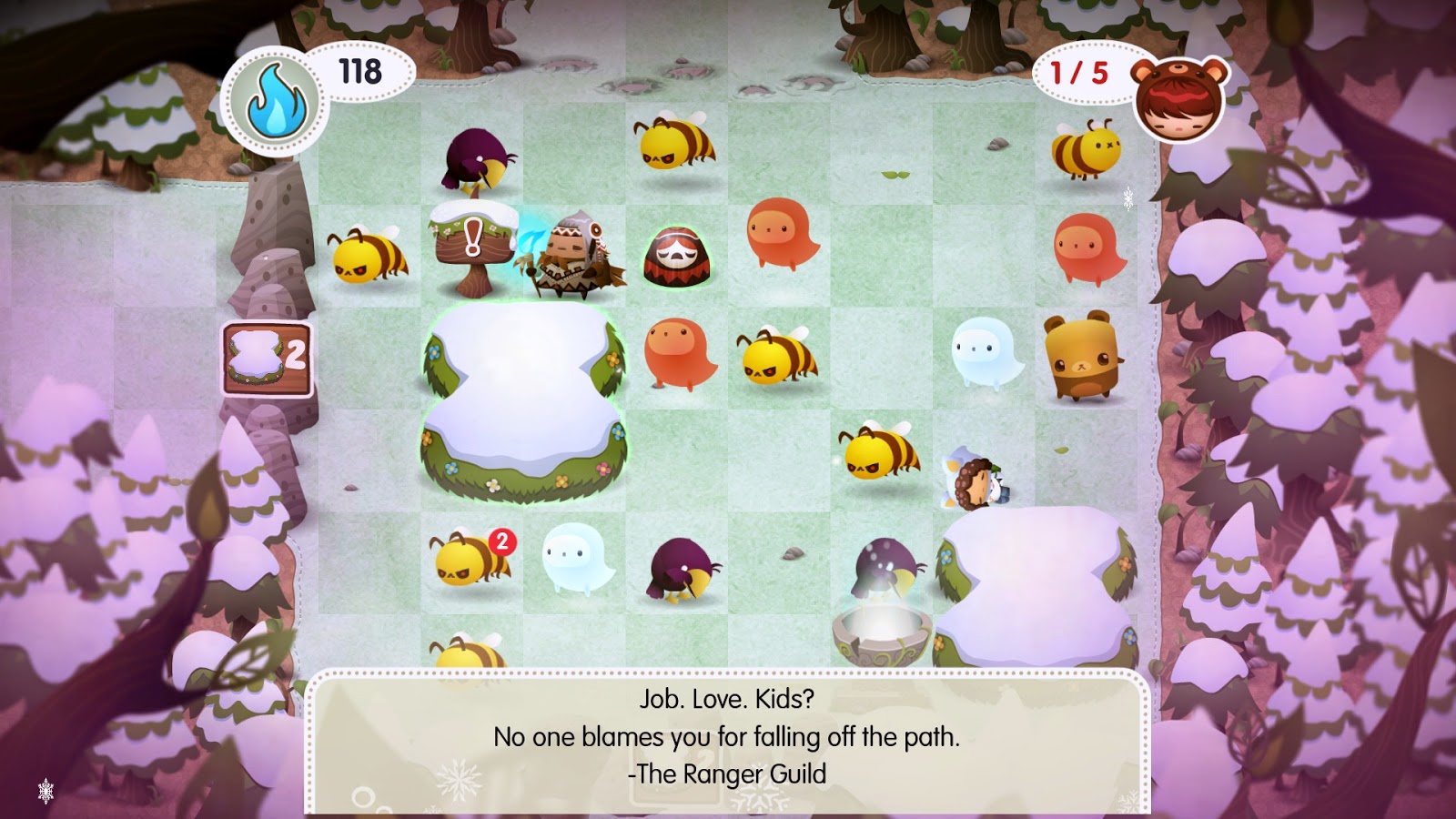 There's one subtle part of the Road Not Taken's dark world that I do think is very effective: While the regular folk you meet change in name and appearance every time you play, the town's mayor is always the same. Later dialogue tells you that the berries found in the forest preserve youth, and that they're formed from the souls of people who died in this forest. I got the impression that there was something more sinister going on with the mayor, that perhaps he was intentionally letting the children loose into the forest to continue cultivating the berries, which he would consume to push off death for as long as possible. In a game explicitly about aging and death, the mayor's eternally unchanging form feels like a crime against nature. 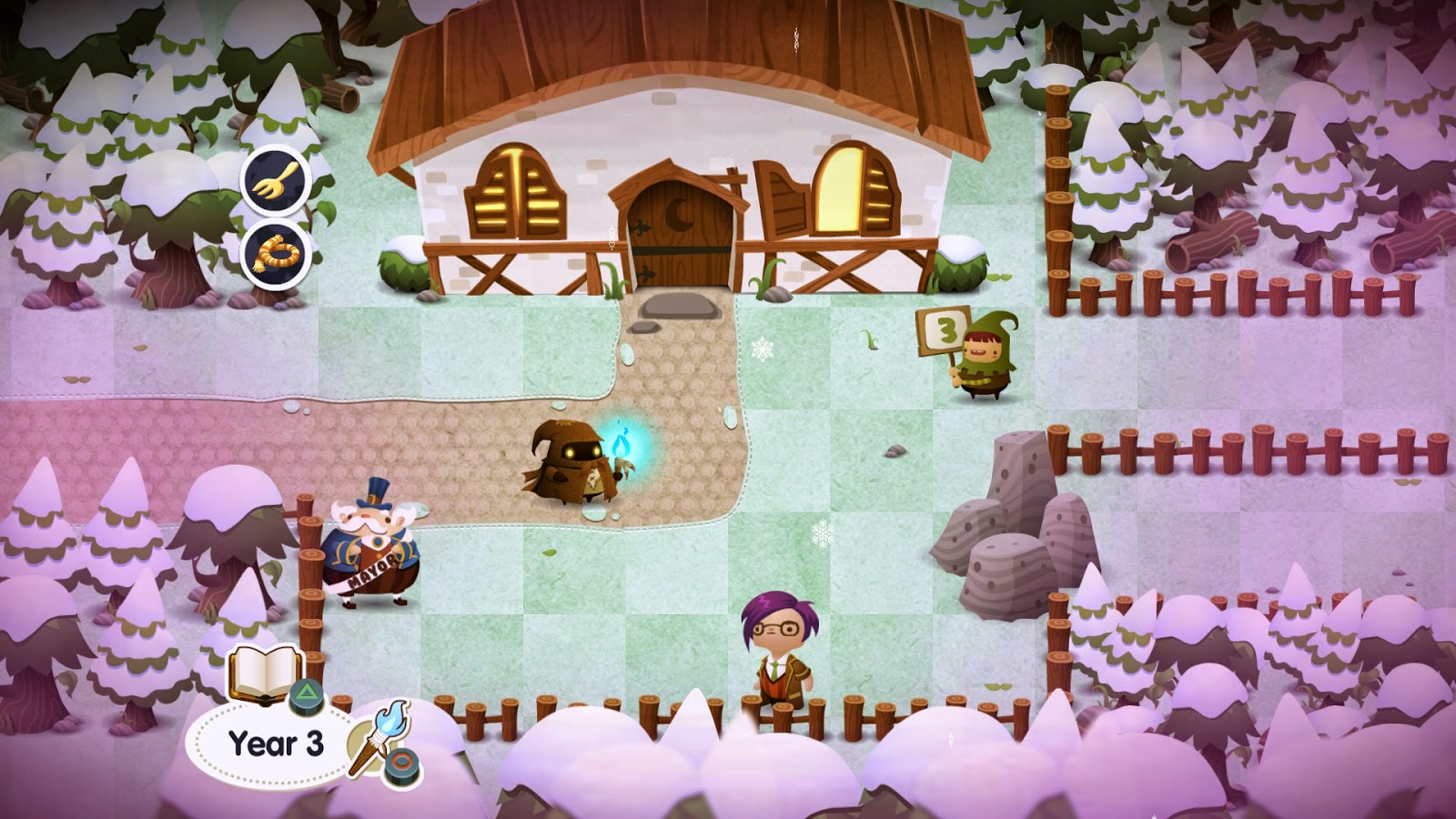 Road Not Taken isn't a bad game; I enjoyed it enough to play through it twice. My first time through (after several restarts) I played it pure, using the game's checkpoint fountains but never backing up/restoring my save file to cheat death. The second time through, I DID backup/restore on each death. The game has sign posts that say "Always cheat," so why not? Turns out the latter method was a lot more fun. Overall, though, this is a rough game hurt by its bizarre crafting rules and randomness. I know "Rougelike" elements are a big thing in indie games, but they really don't appeal to me. There are some great concepts here, but they need to be refined by someone whose strength is puzzle design.
Posted by surlaw at 6:53 PM