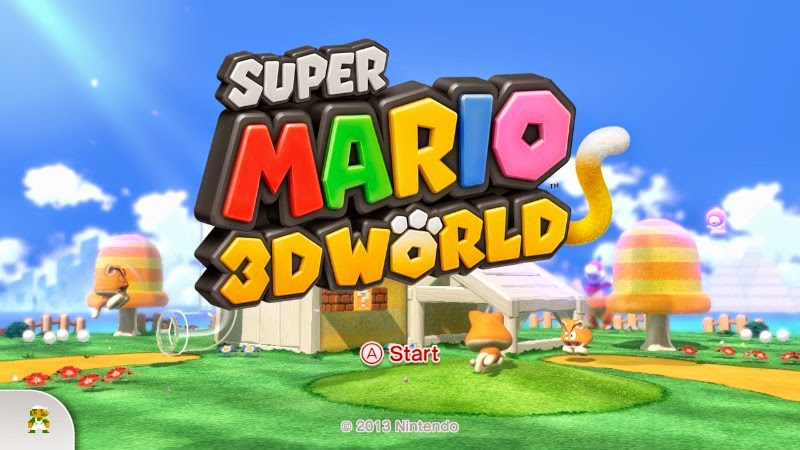 Super Mario 3D Land, released on the 3DS in 2011, offered an interesting new style of gameplay: It took the three dimensional exploration found in Mario games such as Mario 64 and Super Mario Galaxy and combined it with the more linear stage progression of the 2D Mario titles. The result is a game that feels simpler than Galaxy, but far more open than the increasingly inappropriately named New Super Mario Bros series. I prefer the straightforward, reach-the-end-of-the-stage objective found in the 2D titles, but the New Super Mario Bros games were feeling rather stale to me. By incorporating elements from the 3D titles, 3D Land offered a fresh new take and grew to become my favorite of the 3D Mario titles. Two years later, Nintendo would release a sequel on the Wii U that effectively makes 3D Land feel like a proof of concept project for the great things to come.


3D World takes the concepts found in 3D Land and adds a massive amount of variety, new power ups, more challenging stages, and some very fun multiplayer. Up to four players can play simultaneously and, for the first time since 1988's Super Mario Bros 2, can choose between Mario, Luigi, Princess Peach, and Toad, each with their own unique abilities. Their power sets are inspired by SMB2: Mario is the most balanced choice, Luigi has the highest jump but slippery control, Peach can hover in the air for short times, and Toad has the fastest run speed. I've often said that SMB2 is my all time favorite Mario title, and that I've always been disappointed that New Super Mario Bros titles ignore the differences between playable characters that made SMB2 so fun. I'm very happy that 3D World went back to SMB2's style, and couldn't be happier about how well it plays.

There are a bunch of returning power ups and a few rare ones that you'll only see a couple of times, but the two big new power ups that make 3D World unique are the Double Cherry and the Cat Bell. The Cherry splits your character in two, allowing you to control multiple clones of the same character simultaneously, leading to some fun challenges once you wrap your brain around controlling them all with the same inputs. The Bell puts your character into a cat costume and allows you to climb walls, attack by gliding, and swipe at enemies. It feels a lot like playing as Knuckles in a 3D Sonic the Hedgehog game, only in a game that's actually good. All sorts of enemies from Goombas to Bullet Bills to bosses take advantage of this ability too. It makes some platforming segments too easy, but it's super cute and it allows Nintendo to hide some secret items in special, cats-only areas.

There are eight main worlds in the game, each with many standard stages and miniboss encounters, and a few worlds feature Captain Toad special stages (puzzle-based stages that are the inspiration for a new, full Toad title coming out later this year) that are unique from the main game. During standard stages, your goal is simply to reach the end of the stage before time runs out. Along the way, you can collect three hidden stars per stage (these are used to unlock new worlds) and one stamp per stage, which you can use when posting messages to Nintendo's Miiverse social network. After each stage, you're prompted to leave a message for other players, giving the game a really solid, social feel online, sort of like an adorable, less deadly Dark Souls. Unfortunately, there's no online co-op; even though it would be complete chaos, I'd still love to try it.

After the main game's done, there are four more progressively challenging worlds to unlock. The stages in these worlds (I'm still working my way through them) are far more challenging than the main game, and possibly the most difficult stages I've seen in a Mario game. They don't feel very multiplayer friendly, but that's fine, since the rest of the game definitely is. Super Mario Galaxy's Rosalina is also added to the roster after you complete the game, and she plays differently from everyone else. I really enjoyed having this sort of reward, and the only thing better would be to add playable Wario and Waluigi, which I don't imagine ever happening. I never thought I'd see another game that used SMB2's abilities, though, so Nintendo can still surprise me sometimes.
Visually, this is the best looking Mario game yet. There are some occasionally jagged graphics, but for the most part it's gorgeous. Textures look great, especially the delicious looking food themed stages, animation is smooth and cute, and there's a ton of variety from stage to stage. The water effects in particular are quite nice, from seeing the game's camera get wet to how appropriately slippery the game's wet platforms and enemies look. The Wii U isn't a powerhouse of a system, but this game and Mario Kart 8 show what a huge, wonderful difference HD visuals can make to even simple, cartoony games.

It's hard to find any major faults with 3D World. I suppose my only significant issue is that the camera, controlled by the right analog stick, feels a bit clunky, and moves in set intervals rather than giving you true, free camera control. This usually isn't a problem, but it would be nice to be able to more freely view the game's world with its camera. There are also some gimmicky stages that I just didn't find fun (a couple where you ride an aquatic dinosaur-seal, one where you walk on an ever-rotating block as it passes through a lava-filled world) but they're so few and far between that it isn't a big deal. I also tend to not enjoy the stages with extremely tight time limits, I prefer slowly wobbling through a stage.


Once you're done with the main game, you also unlock Luigi Bros, a Luigi-themed version of the original arcade Mario Bros game. I've always loved Mario Bros, so I'm happy to see it here, but unhappy to see that, once again, it's the NES version and not the nicer looking, more responsive arcade version. I understood sticking with the NES version in NES Remix, but I really wish Nintendo would have taken the effort to finally release a perfect home port of the arcade version here. It's not a bad port by any means, but it's noticeably inferior to the arcade original.

Between 3D World and Mario Kart 8, the Wii U is finally starting to mature into a worthwhile system, even if it took longer and cost more than it probably should have. If you liked 3D Land, World offers everything it did plus much more, and in a massively more balanced and attractive package. 3D World's style, stage design, and difficulty curve are all much nicer than 3D Land's, and it's far more inventive than the New Super Mario Bros series. Fans hoping for something bigger and more open in the vein of Mario Galaxy may be disappointed, but for my personal tastes, 3D World is the finest 3D Mario title to be released. It's funny to think that my all time favorite 2D and 3D Mario titles share the same character types and abilities! Maybe someday we'll get a follow up feature the long awaited return of the monstrous frog-king Wart.
Posted by surlaw at 11:40 PM