Anyone who knows what video games are knows Pac-Man; for 34 years, the hungry yellow orb-man has gobbled up billions of Power Pellets, eaten countless ghosts, and starred in a good number of bizarre sequels and bad cartoons. Namco's 2014 Pac-Man Museum is a retrospective containing a great deal of Pac-Man's history, both weird and wonderful, leading up to the recent arcade multiplayer title Pac-Man Battle Royale. It's a collection of some great games, packaged in an unfortunately poor way.


Included in this collection are nine Pac-Man titles, with Ms. Pac-Man being sold as a downloadable add-on for $4.99 (free through 3/31/14). At $20, it's a pricy title, especially considering how clunky (but fascinating) some of these games are. Selling the best classic style Pac-Man sequel as DLC really rubs me the wrong way when it already costs this much. The games are selected from an interface themed around the recent Pac-Man and the Ghostly Adventures cartoon series. The choice of theming it around the most recent incarnation of Pac-Man makes sense; it's too bad the Ghostly Adventures artwork is so ugly. 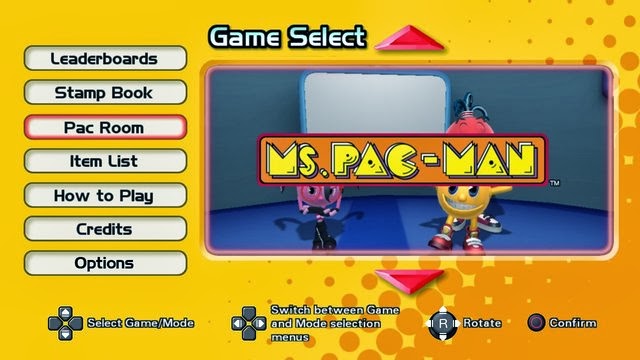 There's no historical database or photo gallery included, which is what I expected as an extra. All unlockables are just visuals and models from the new cartoon, which just ends up feeling like advertising rather than a retrospective. There are so many horribly weird Pac-Man products from his three decades in gaming that it's a shame to not have a gallery of them.

The games themselves offer almost no options and are wrapped in a sloppy package. Each plays in a windowed screen, with no option to expand to a size that fits TVs better. Inexplicably, the Triangle button is used to pause instead of Start. Each game has eight objectives to complete, but very few are interesting and most are incredibly grindy, outside of the high score stamps. Battle Royale, a game entirely based on multiplayer, has no online play, and no option to add CPU bots in local play, so unless you've got four people in one place interested in some competitive Pac-Man, you don't get to experience this wonderful game fully. There aren't any speed modifiers or any other fun options besides basic difficulty, lives, and score bonus settings. There's no option to use the original arcade art in place of the bland windows surrounding the play field. It's a good thing these games are quality titles (or bad, but at least fascinating) on their own, because Namco's production quality on this collection is grade D at best.

The games are the most important part, so here's what you'll find in the Museum: 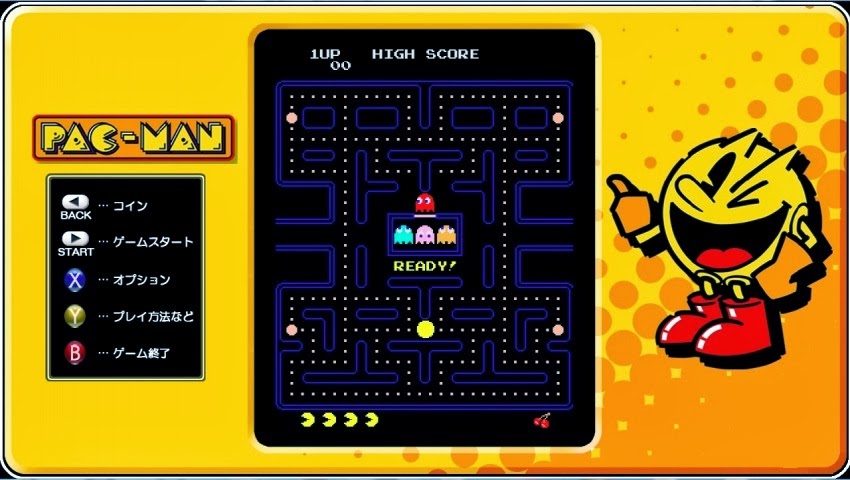 Pac-Man (1980) - The classic. Everyone knows this one, and it's still fun to this day. It's nice having leaderboards available. There's a level select option that lets you continue from your furthest point in the game. 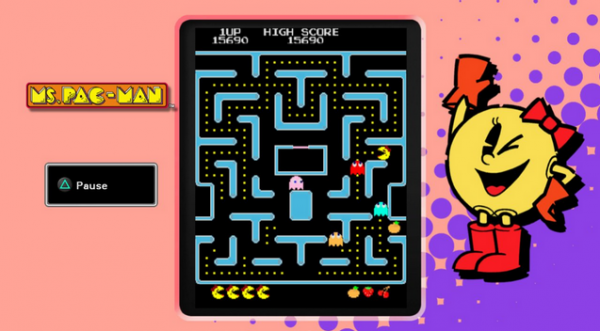 Ms. Pac-Man (1981) - Sold as DLC, rather than included with the Museum. Namco knows they can get away with it since this game's so good, and it's my favorite of the classic Pac-Man titles. 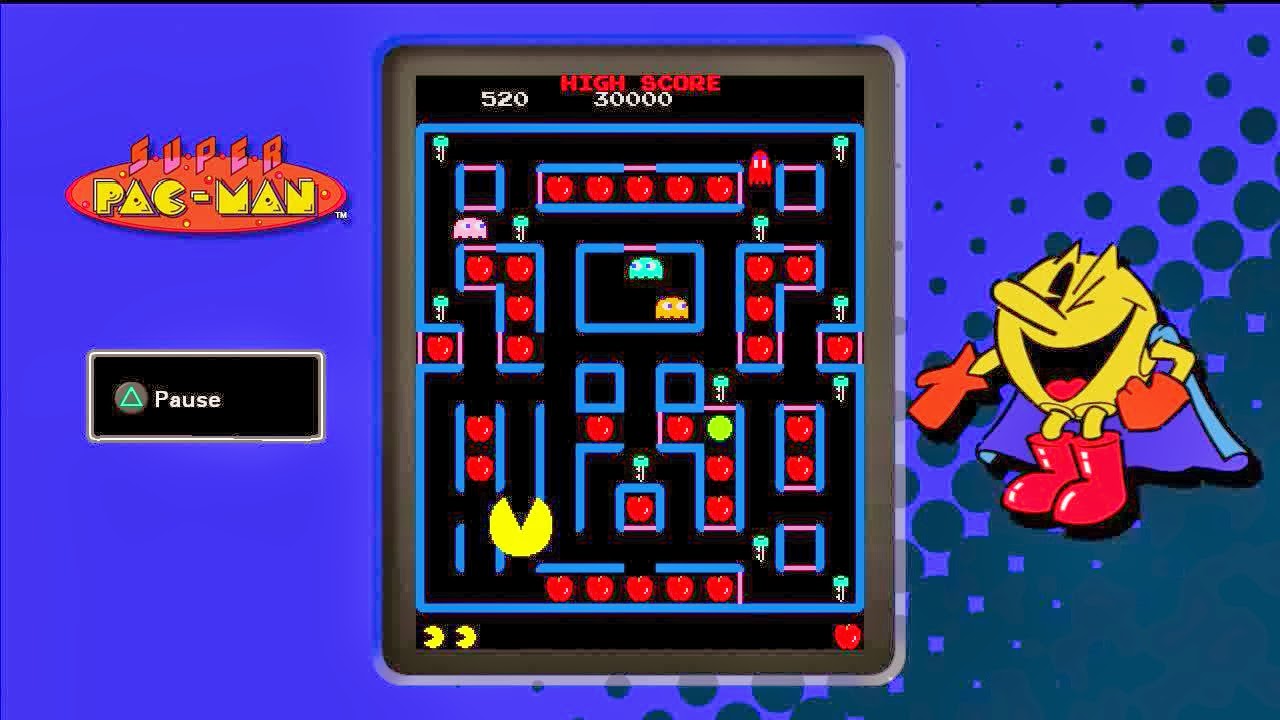 Super Pac-Man (1982) - Pac-Man gets healthy. Players now eat actual food instead of mostly pills and collect keys to open doors in mazes that aren't nearly as well designed as they were in the original game or in Ms. Players can now grow super huge from eating Mega Pellets. 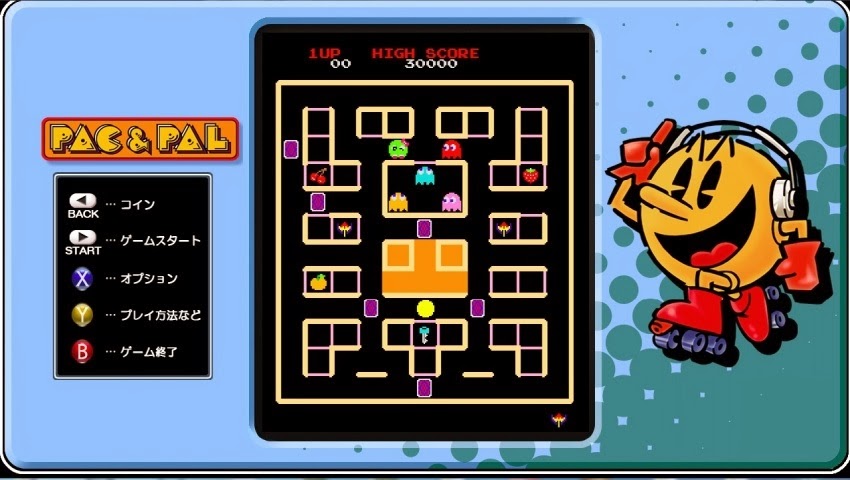 Pac & Pal (1983) - Pac-Man gets a little green buddy who eats his items. Instead of Power Pellets, Pac-Man eats various items like Galaga ships, Rally-X cars, and snowmen to get the ability to blast ghosts and freeze them. Parts of the maze are locked until players collect cards scattered throughout the area. A not particularly good but interesting Pac sequel, Pac & Pal's mazes are the worst designed up to this point. 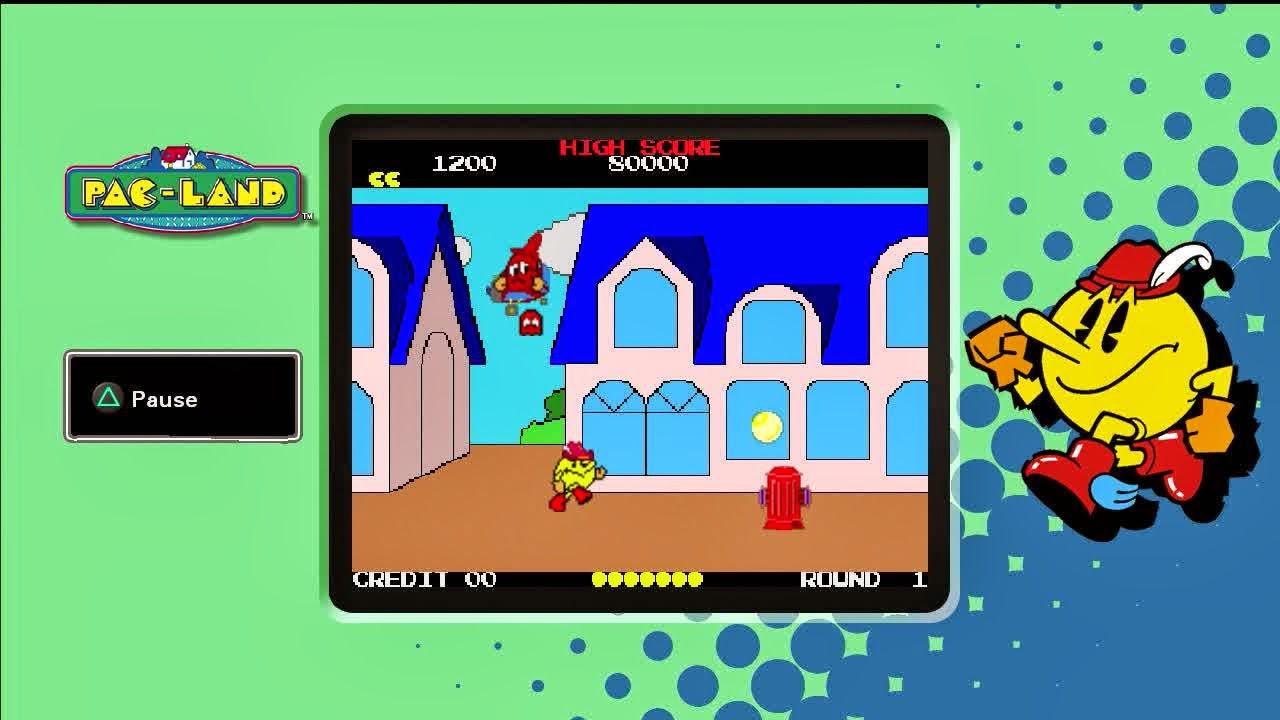 Pac-Land (1984) - A 2D sidescroller. Pac-Man's first game where he's got limbs. It's sloppy and imprecise, and has some downright bizarre control choices that aren't remotely intuitive (mash forward on the control stick while in the air to jump further; holding the stick doesn't work.) This isn't a good game by any means, but it's worth looking at to remember how experimental some sequels and spinoffs in this era could be. 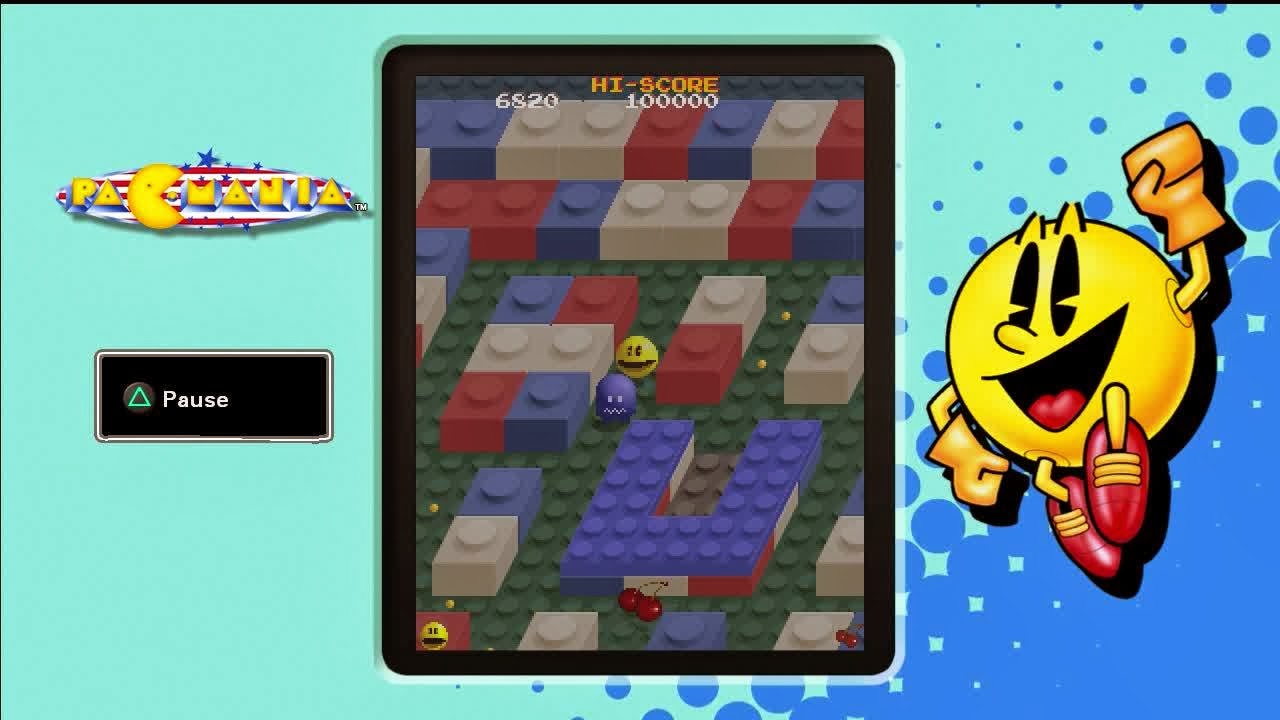 Pac-Mania (1987) - Traditional Pac-Man gameplay from an isometric perspective. Pac-Mania also allows Pac-Man to jump and features more ghosts than usual. This one's got a great soundtrack and colorful visuals but lacks the tight, precise controls of the original titles. 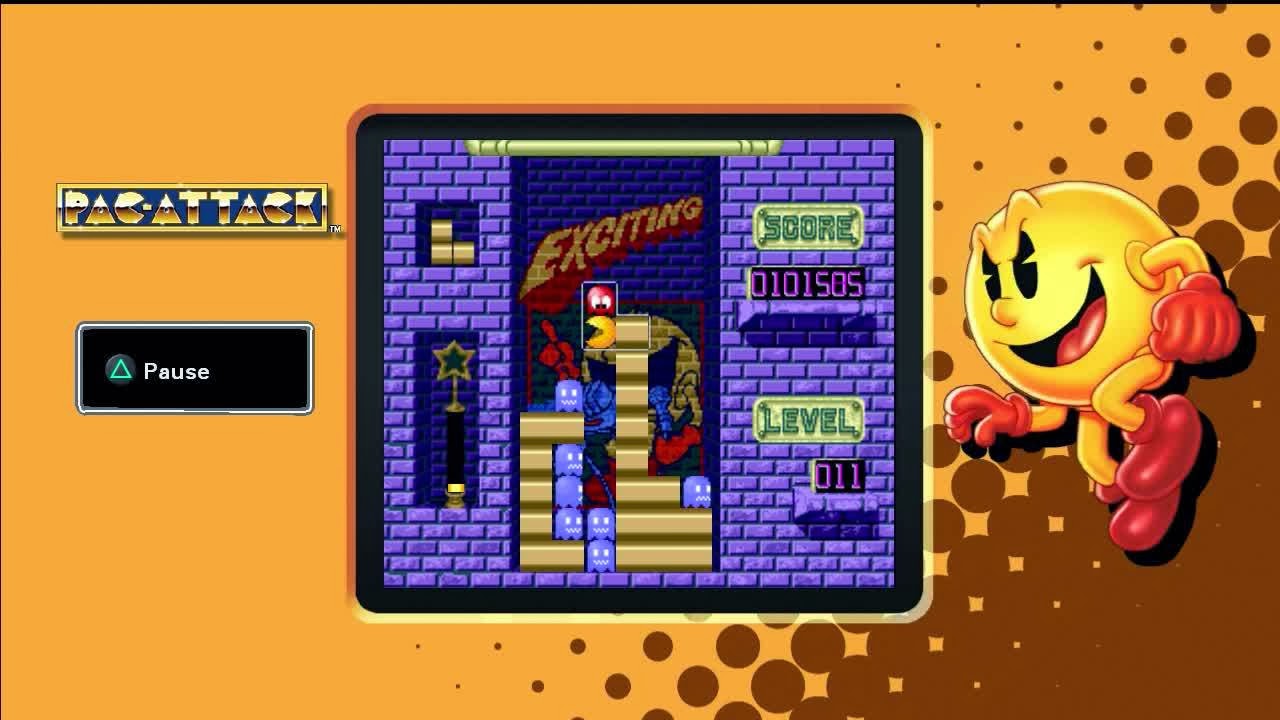 Pac-Attack (1993) - A block-dropping puzzle game. Pieces made of three units fall down Tetris-style, sometimes consisting of blocks, ghosts, and sometimes a Pac-Man, who clears all properly lined up ghosts once you place him. A tough game to learn compared to something like Tetris or Columns. 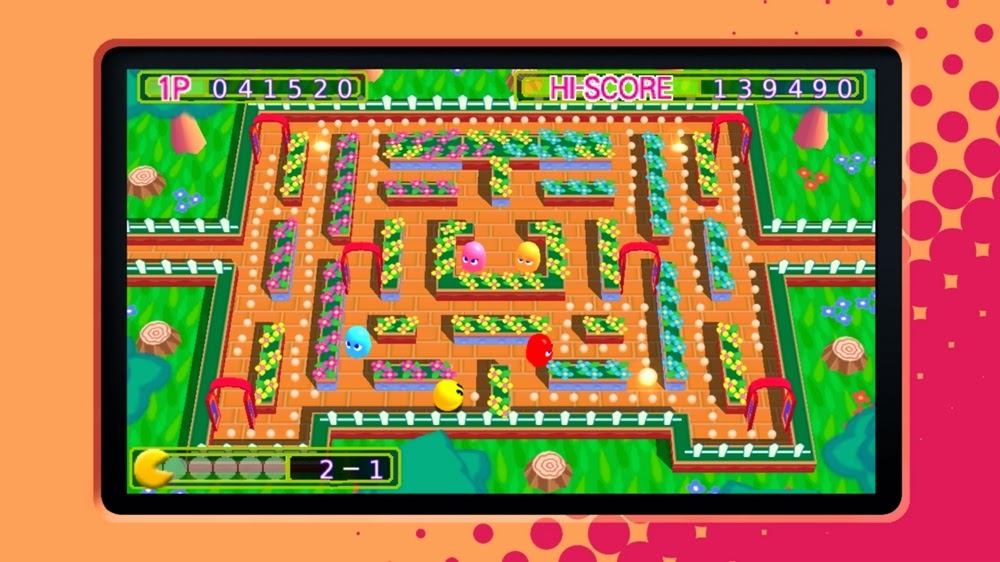 Pac-Man Arrangement (2005) - A title originally released as part of a compilation on the PSP, Arrangement adds power-ups, speed boosters, and boss fights to traditional style Pac-Man play. There are some good concepts here marred by atrocious load times (how did the PSP version's original load times end up here?) and visuals that can make the game hard to follow. 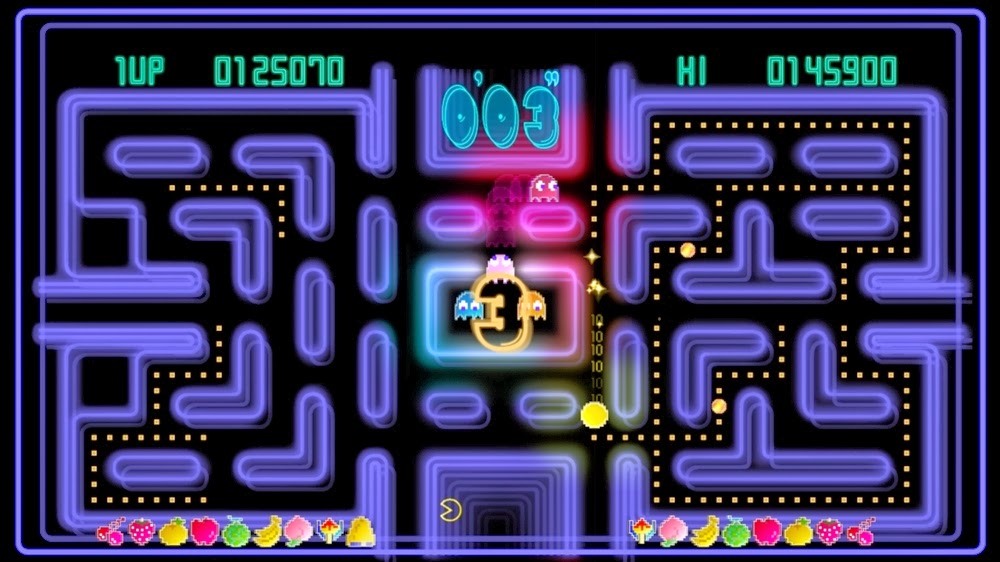 Pac-Man Championship Edition (2007) - The title that kicked off the trippy retro-revival trend of the mid to late 2000's. This game focuses on extremely fast play, hypnotic audio-visuals, and massive scores. It's a good game, but the 2010 follow up Championship Edition DX surpasses it in every way. This original version feels rather barren in comparison now that I've sunk so many hours into DX. 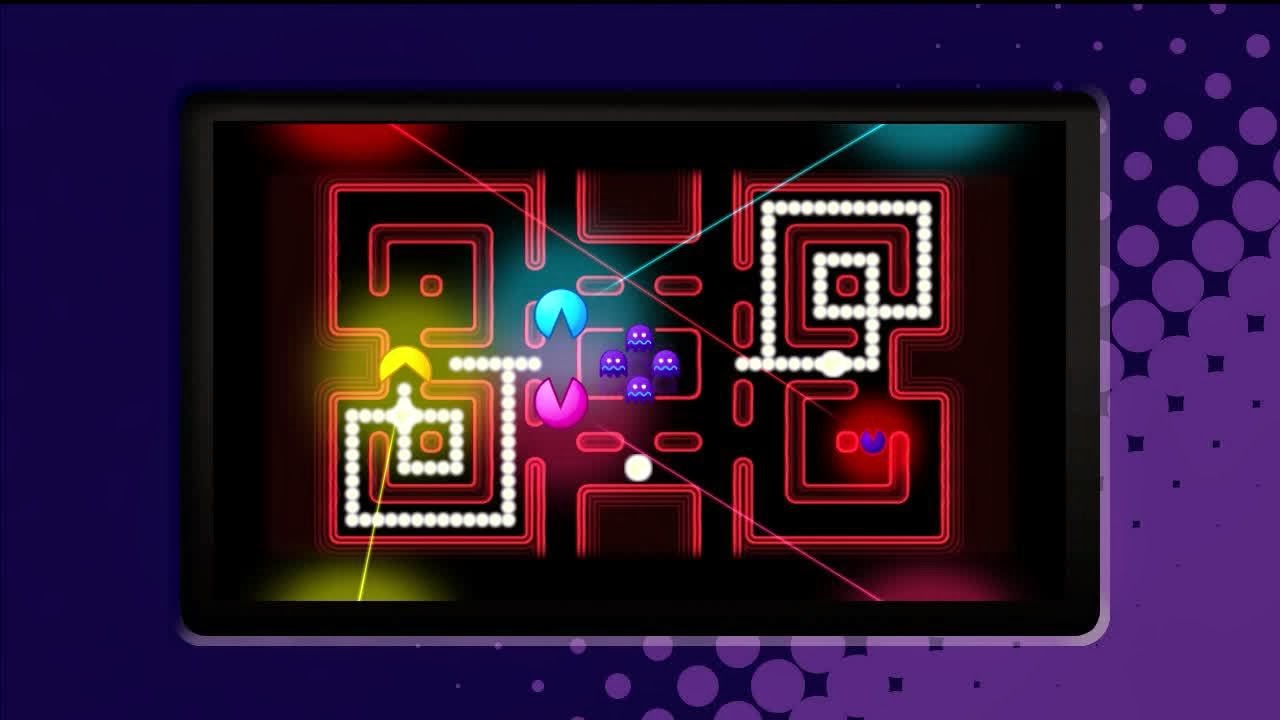 Pac-Man Battle Royale (2011) - Four player Pac-Man. Players eat ghosts, fruit, and each other in a fight for Pac-Supremacy. This game's phenomenally fun with four players, but Namco put no effort into the home port. No online play, no CPU options, and no screen size optimization makes this a fairly bad port of an otherwise stellar game.

For its high price, I wish this collection had included the surreal point-and-click adventure Pac-Man 2: The New Adventures and the perfect, trippy DX revision of Pac-Man Championship Edition. At the very least, allow players who already own CE DX to integrate it into the museum interface. An online version of Pac-Man Vs., where one player controls Pac-Man and others control ghosts, would have been wonderful, but Namco had no interest in getting anything in this collection working online, so that would be a no go. It would have been nice to see other oddities like Midway's Pac-Man Plus and Jr. Pac-Man show up, too.

The Pac-Man Museum is worth checking out for hardcore fans, but it's a shoddily produced, overpriced anthology that deserved far more love than Namco was willing to put in. If you're only interested in classic Pac-Man, I'd recommend the Namco Essentials Collection instead. If you only want one Pac-Man sequel, Championship Edition DX's the way to go.
Posted by surlaw at 10:38 PM