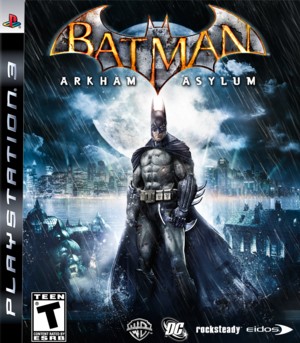 Rocksteady Studios' Batman: Arkham Asylum is a video game rarity; it's a game based on a popular license that manages to actually be fun, well made, and critically acclaimed. Focused on equal parts brawling, stealth, and light puzzle solving, Arkham Asylum is among the best superhero video games you could pick.

Arkham Asylum is written by Paul Dini, one of the head writers of the popular Batman: The Animated Series from the early to mid 90's, and features the voice talents of Kevin Conroy as Batman, Mark Hamil as The Joker, and Arleen Sorkin as Harley Quinn, all actors reprising their Animated Series roles. Hamil's take on The Joker has always been fantastic, and it's just as good here as it was fifteen years earlier. The tone and art design is more similar to the Batman comics of the 2000's than the 90's cartoon, which is my biggest beef with the game. Dini's writing is decent here, but he's more at home writing more subdued versions of these characters. Every villain's craziness is pumped up to such a huge degree, especially in hidden interview tapes players unlock, that it feels almost farcical at times. Only The Joker's writing/acting really fits the uneven tone perfectly. 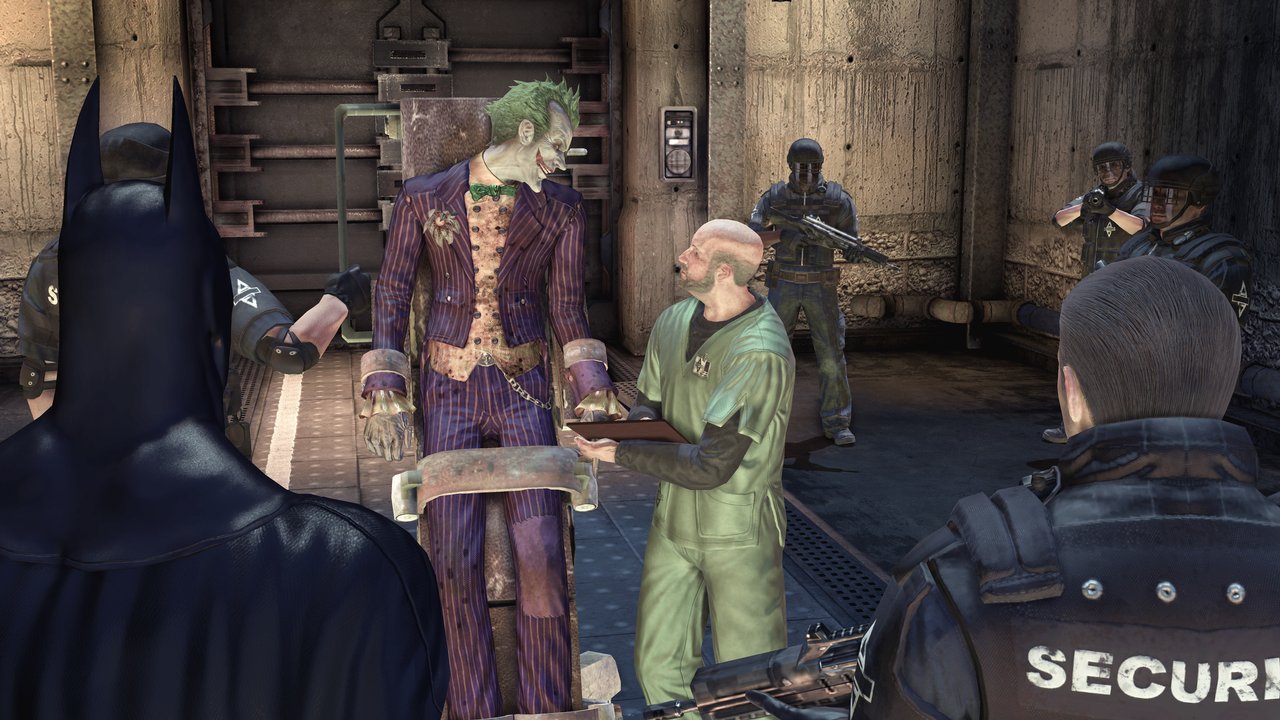 More than any superhero game I've played, Arkham Asylum really does a great job giving you all of a hero's tools and really letting you become that character. Batman's batarangs, grappling hooks, and explosives are useful in every aspect of the game from combat to puzzles to exploration. Combat, which focuses largely on simple but precisely timed single-button combos and counter attacks, flows very well and looks great, really selling the idea of Batman as an expert martial artist without ever making him look invincible. Punching/countering feels more like learning a rhythm game than a fighting game.

The game's pretty easy on its normal difficulty setting, but going up against enemies with guns head on is almost guaranteed death. I'm actually impressed that a game could make guns scary, and I'd like to see more games try to do so. It doesn't take many shots for Batman to die, and the only countermeasure to an armed assault is to hide and strike from the shadows. Arkham Asylum integrates stealth and combat better than most action games, though it's still no Metal Gear

There's actually a lot of Metal Gear in this game, from the way Batman calls puzzle/plot exposition helper Oracle for advice to the amount of time spent crawling through ducts to the wonderful hallucinations during your encounters with the villain Scarecrow, who now acts and sounds more like Metal Gear Solid's Psycho Mantis than anything else. As a fan of both Metal Gear and the Batman franchise, I certainly enjoyed this. 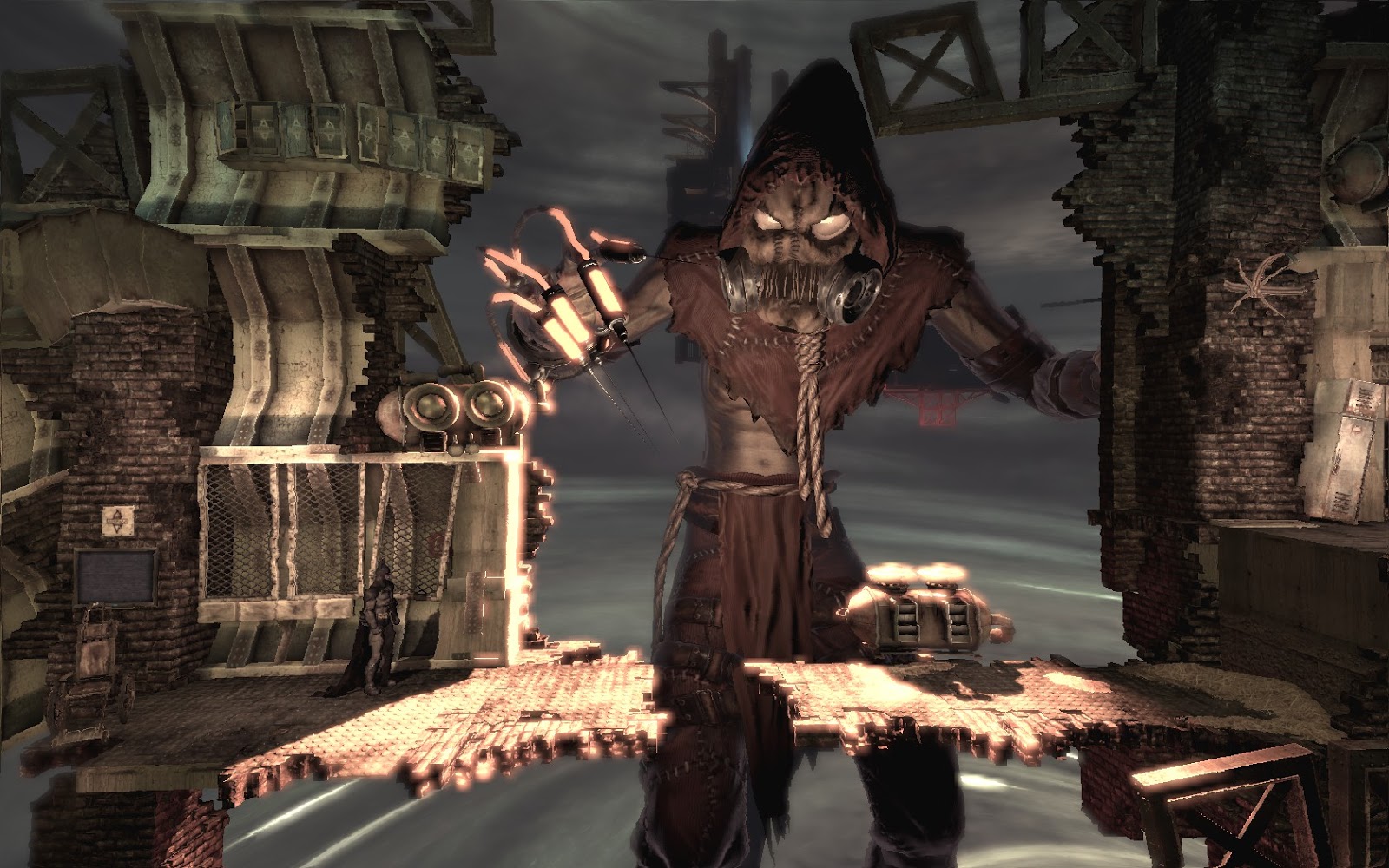 Gameplay occurs across a smallish hub world with several larger zones found within. Each area holds plenty of secrets, some of which can only be found after completing later parts of the game ala Metroid. Among these are Riddler Trophies, which unlock varies rewards as you find them. There's a huge number to find, but the game does a decent job keeping track of which ones you've already got. Exploration is a lot of fun, even if the rewards aren't very exciting. Finding new routes through an area and finding new, subtle ways to get through enemies is a highlight of the game.

Sound design is probably the Arkham Asylum's weakest point. While the voice acting for the main characters is solid, Joker's random goons repeat their lines too often have some really bad cartoon screams that got annoying after a little while. The Lunatic class enemies also have a really, really awful sound clip when they're attacking you that was obnoxious to hear after the first time. When music plays it's decent, but most of the game is spent in silence. It's appropriate, but it's also a little dull.

The story here isn't great, but you get to run into a decent cast of Batman characters and the main actors are all having a good time. A fire at Blackgate Prison causes many of Joker's buddies to be transferred to Arkham Asylum, where he promptly escapes and causes chaos. He's searching for Titan, an artificial substance based on the Venom drug used by luchador mastermind Bane to turn into a big beefy muscleman. Titan was developed by Dr. Young, an awful doctor who decided that a drug that turns people into muscle monsters would be good at curing psychopaths of severe disorders. She tests it on unwilling patients like Bane and according to the scars on their heads seems to have partially lobotomized some of the inmates in the asylum, including the ones that were just sent here from Blackgate and aren't even under her medical care. Somehow, the game paints Dr. Young as a victim instead of saying no, she's actually probably the worst person in this asylum. Like Resident Evil's T-Virus, Titan transforms humans into monsters, some of which end up fighting kind of like Resident Evil's Tyrants. When this is the kind of treatment mental patients receive, maybe Joker's plan to destroy Gotham isn't such a bad idea. 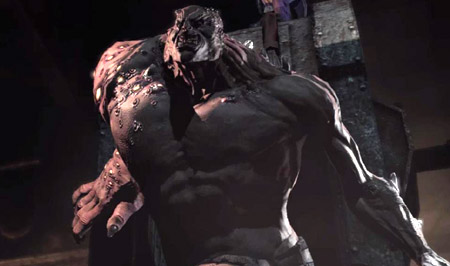 The morality of Batman is usually pretty gray, though less so in Dini's other Batman stories. The game batters you over the head with the message that Batman's got just as many problems as the supervillains he's fighting, but never stops to say that maybe beating screaming mental patients that jump onto you like apes isn't the best look for a hero. It's an action game, so you're going to fight a lot of cannon fodder schmoes, but making them victims of medical abuse rather than willingly participating gangsters and mafiosos makes the whole thing feel a little gross. Yes, the game says that these are The Joker's crew and not regular patients, but that feels like an afterthought and there certainly don't seem to be any non-violent patients around. The Lunatic types are just purely patients kept in solitary confinement until they become ape people and don't seem to have any tie to The Joker at all. I'm all for making the player character a dark, morally uncomfortable character, but I don't think Arkham Asylum was really trying to do this, and thus didn't treat its material with the amount of care it deserved.

Aside from its mixed messages, my only real problem with Arkham Asylum is some of its art design. The world looks great and Batman and Joker look perfect, but some of the supporting cast have pretty ugly designs. Poison Ivy in particular looks really stupid, and I don't particularly care for Scarecrow's design, even if I dig the Psycho Mantis motif. Harley Quinn's always been a bit of a fetish character, but she looks particularly trashy here. There's little visual variety in the thugs you fight. 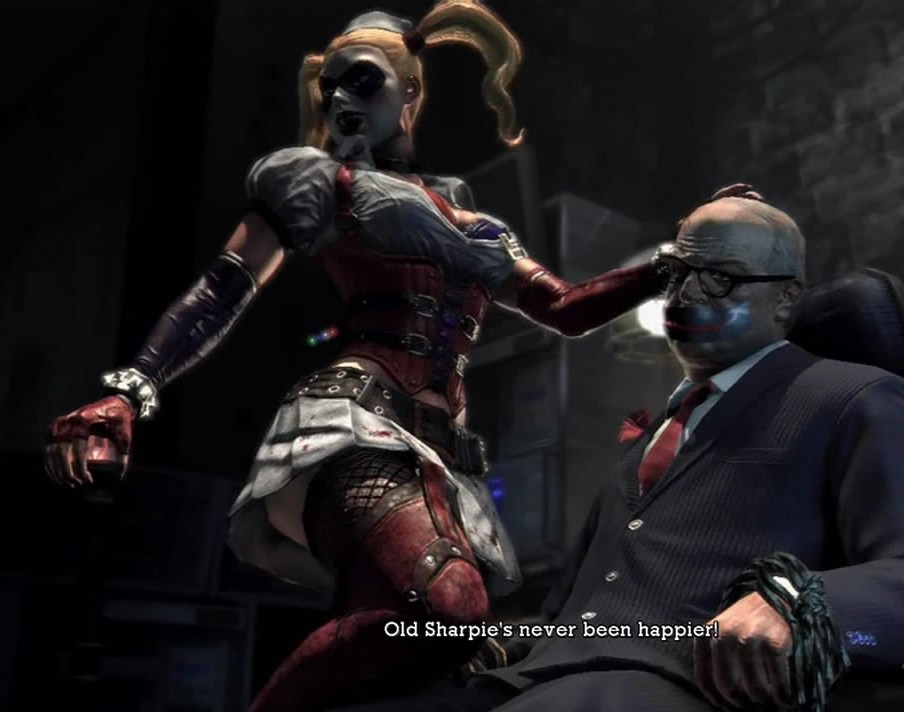 I wish Arkham Asylum had chosen to either go closer to the lighter side of the Animated Series or closer to the darker side of comics like The Killing Joke. It exists in a weird area in between the two, without really playing to the strengths of either direction. Still, it's a very strong, well designed game driven by great stage design and quality acting. The weakness of some story and art elements is unfortunate, but not a huge deterrent when the gameplay's this fun. Arkham Asylum's intention is to create a genuine Player as Batman experience, and it does so extremely well.
Posted by surlaw at 12:10 AM