Wizorb, the first title developed by Tribute Games, is a Breakout clone with retro styling. As usual for the genre, players use a paddle to bounce an orb around the screen breaking sets of bricks and knocking down enemies. Wizorb tries to mix things up by introducing a magic system and very, very light RPG elements, but ultimately it's a very simple, bare-bones Breakout type that's perfectly serviceable but unspectacular.


Originally released on the Xbox 360 in 2011, Wizorb has since been ported to computers, phones, and Sony's current generation systems. The version I played is cross-compatible between the PSP, PS Vita, and PS3; buying one version gives you access to it on any system. It's a low-priced title that plays well in small bursts, but has a variety of little issues that keep it from being a really solid game. 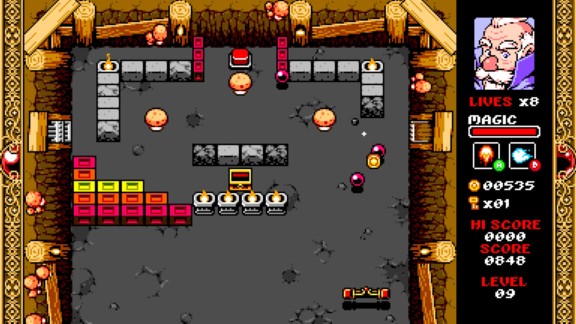 In addition to the standard paddle and ball play, Wizorb gives players four spells, two of which can be cast while the ball is in play and two while it's in contact with the paddle. You can shoot a fireball, control the ball's trajectory with a burst of wind, power up its breaking ability, or temporarily control the ball directly. Unfortunately, your magic meter is very small, so you can only use a couple of spells in a row and your meter does not refill between stages or even complete worlds. Some blocks randomly drop magic potions to restore your meter, but I went several stages without seeing one more than once, leaving me with nothing but the most basic gameplay.

Many blocks produce coins, which you can use to buy extra lives, power ups, or donate to villagers in a small town that you can walk around in between stages. The rewards for helping villagers out are generally boring, usually just keys to open shops or extra lives, and their dialogue isn't memorable. There's a dog who speaks in emoticons. The town development and item shopping is meant to give this game, which has a swords and sorcery art style, minor RPG elements, but they're not interesting enough to be a selling point. Power ups are temporary and most just feel like the extra abilities from Taito's definitive Breakout clone, Arkanoid. In spite of being essentially the same game, the 1986 Arkanoid has better distribution of power ups, better stage design, and better sound than Wizorb. As a result, Wizorb feels more like a step sideways than forward. 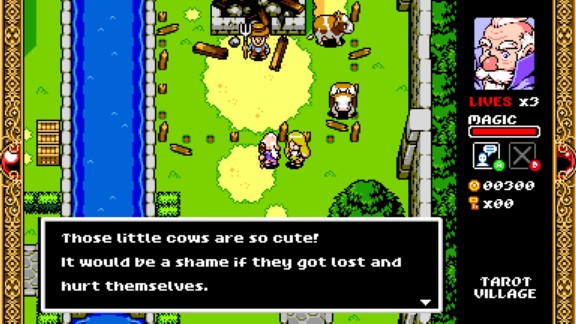 The game's sprite graphics are fine. Enemies are cutesy and the colors are vibrant. There's nothing particularly impressive, but certainly nothing bad. They definitely look better on a handheld than on a big screen TV. Its music tries to capture the style of late 80's/early 90's video games, but does so poorly. It's not catchy, the songs are too short and loop too often, and some notes are horribly shrill (the theme to world 3 is the worst for this.) It feels like a mechanical approximation of old school game music but without an understanding of what made the music in the more memorable classic games so endearing. The sound effects also lack any real punch.

Level design is mediocre, with far too many unbreakable blocks to navigate around and far too many blocks that take multiple hits. Each of the five worlds is divided into twelve stages and a boss stage and if you run out of lives you have to restart the whole world. Given how long and tedious some of the later stages are, this feels like poor design. I'd rather have more worlds with fewer substages within each, so that there would at least be more visual variety. Again, there's nothing outright terrible about the stage design, but it's clearly weaker than Arkanoid, which should be the bare minimum of what a block breaking game should aim for. Arkanoid does more in its 33 levels than Wizorb does in its 65. 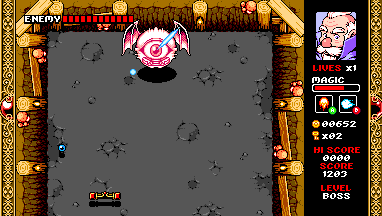 Wizorb is fine as a time waster but it won't revolutionize the genre. Kirby's Block Ball is a better portable Breakout clone if you've got a system that can play it, even though it gets pretty tedious by the end too. If it did more with the town building element and had better level design, Wizorb would be more of a contender, but as it is now, it's just an average Breakout clone with nice visuals and unmemorable side content.
Posted by surlaw at 1:51 PM