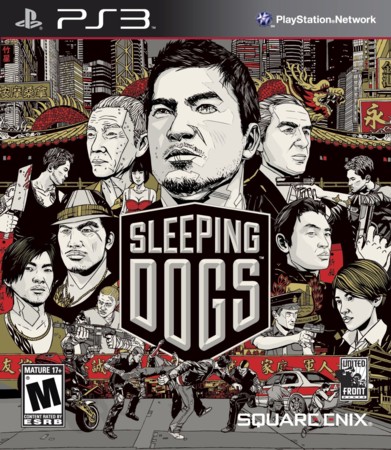 Sleeping Dogs is an open world action game by United Front Games, the team behind Sony's ModNation Racers and Little Big Planet Karting. It was intended to be the third entry in the True Crime franchise before switching around publishers and spending a bit of time in development hell until ultimately being picked up by Square Enix. Like their two racing games, United Front's take on the genre Grand Theft Auto made famous is stylish, charming, but doesn't do anything that really sets it apart from the competition in a major way. As a disclaimer, this isn't my genre of choice. The only Grand Theft Auto games I put any time into were Grand Theft Auto III and Vice City, neither of which held my attention for very long. The only "drive everywhere, cause chaos for everyone" open world game I've ever loved was Pandemic Studios' The Saboteur, which I feel hit every note almost perfectly. With that said, at least Sleeping Dogs kept my attention long enough to want to finish the game, which is more than I can say for most of the genre.

The star of the game is Wei Shen, an undercover cop sent by the Hong Kong Police Department to infiltrate the Sun On Yee, a crime syndicate that spends most of its time and bullets on internal politics. Shen's professional mission is to relay information that could lead to the downfall of the Sun On Yee triad, while his personal mission is to seek revenge on Sam "Dogeyes" Lin, a Sun On Yee leader who years earlier set Shen's sister on a destructive, drug addicted path leading to her death. Apart from a few very minor comments, no one in the police force seems concerned at all that Shen's methods result in hundreds of dead gangsters, millions of dollars in property damage, and the potential deaths of hundreds of civilians. 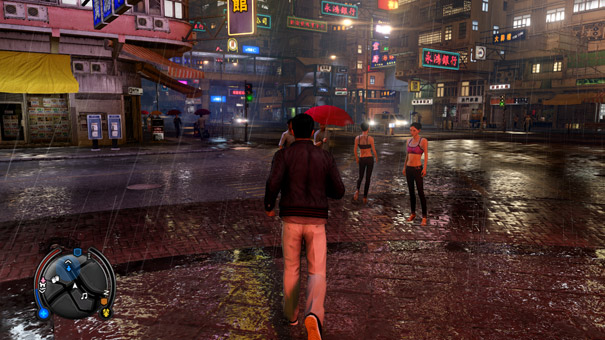 The whole "character is portrayed sympathetically in cutscenes, is fine with murdering everyone in sight in gameplay" thing put me off from GTA and it puts me off from this game too. Wei Shen is a better developed character than the GTA protagonists I'm familiar with, but this disconnect still feels like way too much. One of the things I dig about the Yakuza series is that the characters actually abide by the code they claim to live by during the story scenes. The heroes of the Yakuza games are always involved in shady business and connected to organized crime, but they never butcher minor thugs or drive through crowds of civilians without a care or gun down hundreds of people per game. If a game is going to be story-heavy, there has to be some connection between how the character behaves in dialogue and while walking around. I'm well aware that Wei Shen only kills bystanders if you allow him to, but I don't like that it's even an option; I would be totally happy if you got a Game Over for accidentally driving over an innocent while in pursuit of your rival mobsters. At least The Saboteur's Sean Devlin gets upset if you accidentally hit someone and the game encourages you to avoid targeting anyone but Nazi soldiers (and Devlin's not even a cop.) 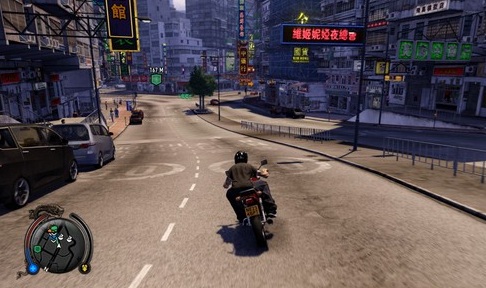 There's a wide cast of characters in this story. Winston Chu is the Sun On Yee chief who serves as your boss. He's loud, impulsive, and amazingly doesn't get himself killed immediately after you meet him. His mother runs the Golden Koi and is colder than half the gangsters you meet. Jackie Ma is Wei Shen's childhood friend, a wannabe gangster with the only character arc in the story that I really cared about. Uncle Po is the head of the Sun On Yee and is voiced well by James Hong. On the police side, you've got Inspector Teng, the Good Cop, handler Raymond, the Neutral Cop, and superintendent Pendrew, the Chaotic Cop who is almost immediately obviously going to cause trouble for you later in the game. The standout character here is Old Salty Crab, a minor supporting character who helps you break into a superstitious rival's house to wreck up his furniture in order to put the fear of ghosts into him.

The main actors play their characters well, especially Will Yun Lee's voice over for Wei Shen. Hollywood actresses Lucy Lui and Emma Stone also play minor characters, with Stone's appearing in only one side mission and having no significance to the overall story. Even as a fan of Stone's, I have no idea why she's in this game. As with many games, the acting for the minor citizens you pass on the street is a lot worse. This didn't surprise me, but what did is the way the minor NPCs were directed. Most of the game's dialogue is in English, with Cantonese phrases peppered throughout. The game would feel more immersive if its characters all spoke in their native language, but that's not what it was going for and that's fine. What I really didn't like was the way a lot of street vendors and citizens speak in cartoonish broken English, when they should either be 1) speaking their native tongue, if the game intends its setting to be immersive, or 2) speaking English normally, if the game intends its language to be a translation for the benefit of the player. Having a bilingual lead character should have led to anything interesting at all, but it's completely unimportant. These vendors aren't attempting to speak English for Shen's sake, and it makes them feel a little bit like uncomfortable caricatures. None of this applies to the main cast, which is what makes it stand out so sorely. 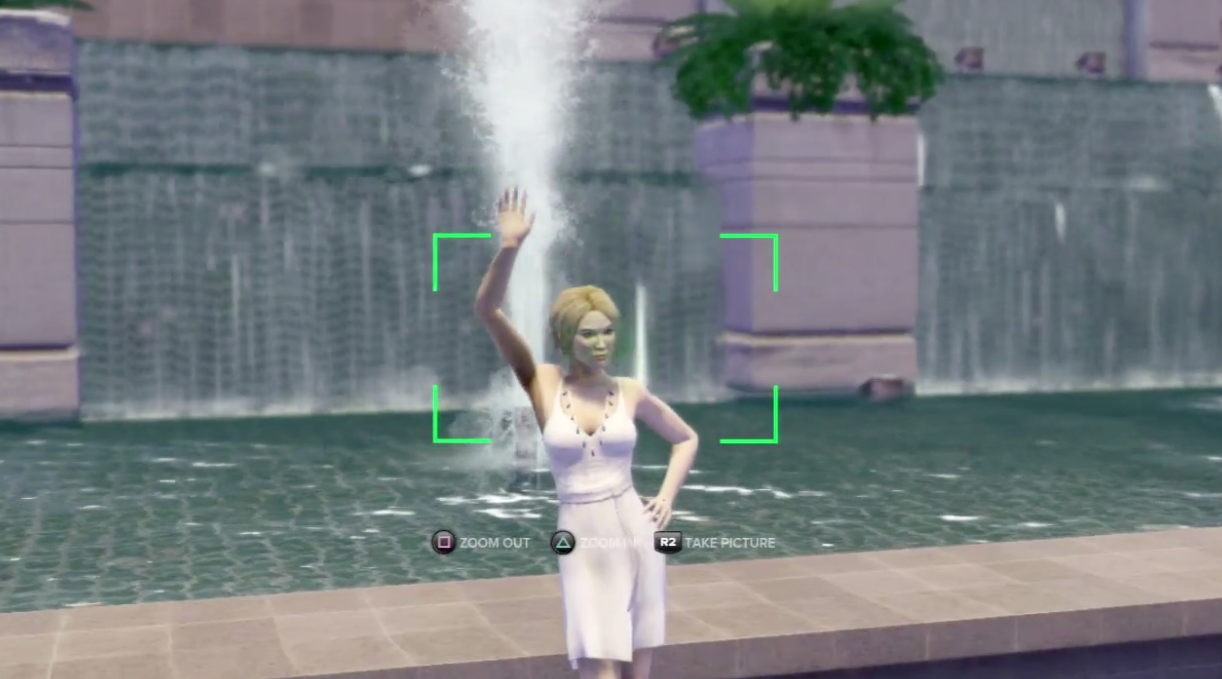 The game's writing is standard Mature Video Game fare, meaning everyone swears a lot in a way that rarely feels organic (For video games, see Nier and Spec Ops: The Line as examples that use excessive language effectively, for movies, see anything Quentin Tarantino has written) and almost everyone's a macho blowhard. I never really bought into Shen as a character, and his bombastic reactions to everything Handler Raymond says to him feels like borderline satire of cop dramas. There's plenty of embarrassing, badly written taunting all around. The game takes itself too seriously too often while not treating its more serious moments with the gravity they require, outside of Jackie Ma's story. The more lighthearted moments are pretty good; I liked having to chase down a rival mobster who stole my buddy's wedding cake and I loved the aforementioned Old Salty Crab mission.

Like its story and presentation, Sleeping Dogs' gameplay isn't perfect, but I still enjoyed it more than I enjoyed GTA3/Vice City. The game's action is split between hand to hand combat, racing, and third-person shooting. When punching dudes, Shen controls similarly to Batman in Rocksteady Studios' Arkham games. Enemies flash bright red to tell you when you press the counter button, and as a result combat is almost laughably easy. It's definitely fun, but there's no real challenge and combos and melee weapons are limited. You can shove enemies into environmental hazards for bonus points. Driving works fine, and there are plenty of good radio stations to listen to, but I didn't enjoy the mandatory racing missions and completely skipped the optional ones. I did enjoy the chase/escape sequences in cars, didn't enjoy the same sequences in boats. The shooting parts are serviceable. You can go into slow motion by aiming while jumping over junk. There are also several scenes where you have to chase down enemies on foot and tackle them to the ground; both these chases and the gun fighting is better than they are in the Yakuza games, but the hand to hand fighting feels a lot dumber. 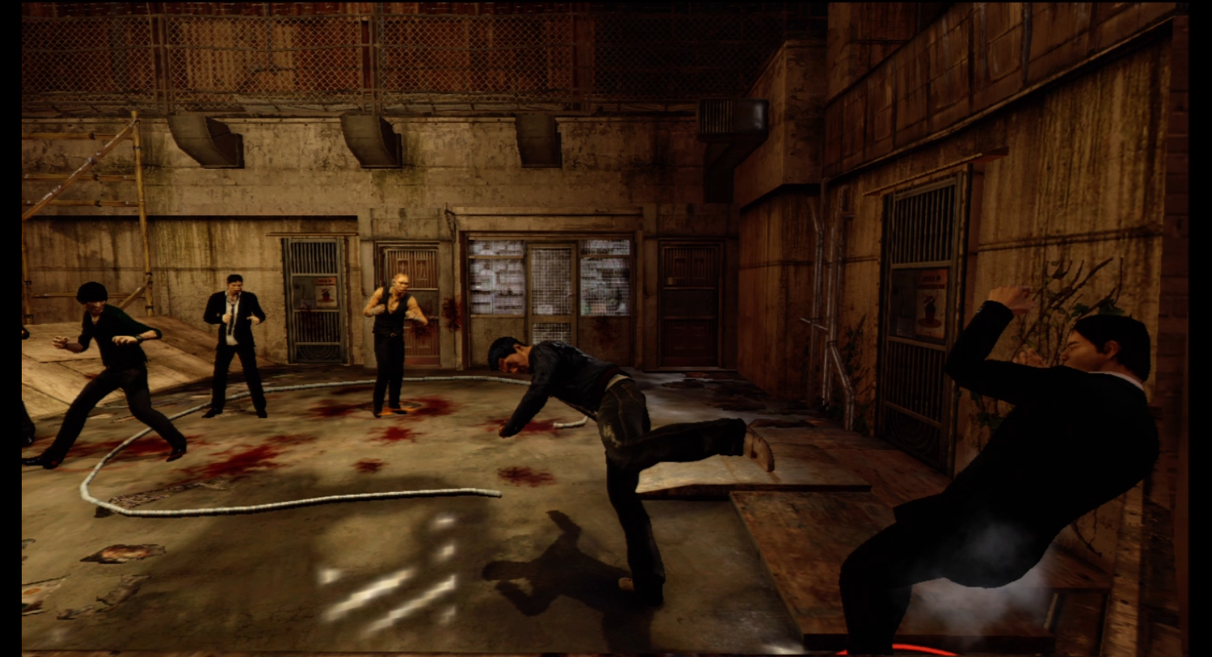 There are a couple of technical issues that bothered me, and a few bugs I ran across. I absolutely hate playing around in an open world and being told "You're leaving the mission area/Mission failed, Game Over" because I went off track a little bit to pick up a collectable in a non-time sensitive mission. I don't like having a huge city to run around in with nothing to do other than collect doodads to boost my completion rate/health/cash. Something the Yakuza games do well is restricting the setting to a small part of a city, but packing that area with things to do. Sleeping Dogs' shops don't even let you browse selections of items; aside from clothing stores, each sells exactly one thing. There's functionally no difference between the soda machines on the street and the entire stores you can enter. If you enjoy just driving and causing chaos or collecting things, there's a ton to do, but I felt no desire to go out of my way to do either, even if the radio was playing some really great music. For bugs: No end credit music played for me, one of the last missions in the game (one where Shen is badly injured) didn't have its enemy NPC graphic spawn properly, resulting in a fight between Shen and an invisible enemy, and sometimes civilians would spawn standing on top of phone booths/soda machines. At least that last one is funny. Also, between this game, Mass Effect 3, and Metal Gear Rising: Revengeance, I'm very much done with sequences where the player slowly holds UP for a few minutes as their wounded character slowly limps in a dramatic fashion that would be more suited to a cutscene.

I spent about 17 hours going through the game's story and completing all of the Inspector Teng police side missions. I left a lot undone, especially with the racing portion, but I felt I got enough out of the game. The main story felt like a good length, and I would have even been fine with shortening it; the missions you run for Sonny towards the end slow the story's momentum and feel like filler, and would have been better off optional or moved to earlier in the game. There are a couple of women you can date, but most don't reappear after their initial date and there's a creepy mission where Shen stalks one of his dates because she cheated on him, even though he's free to date as many women as he pleases at once. At least she calls him out on this, but it still feels dumb. 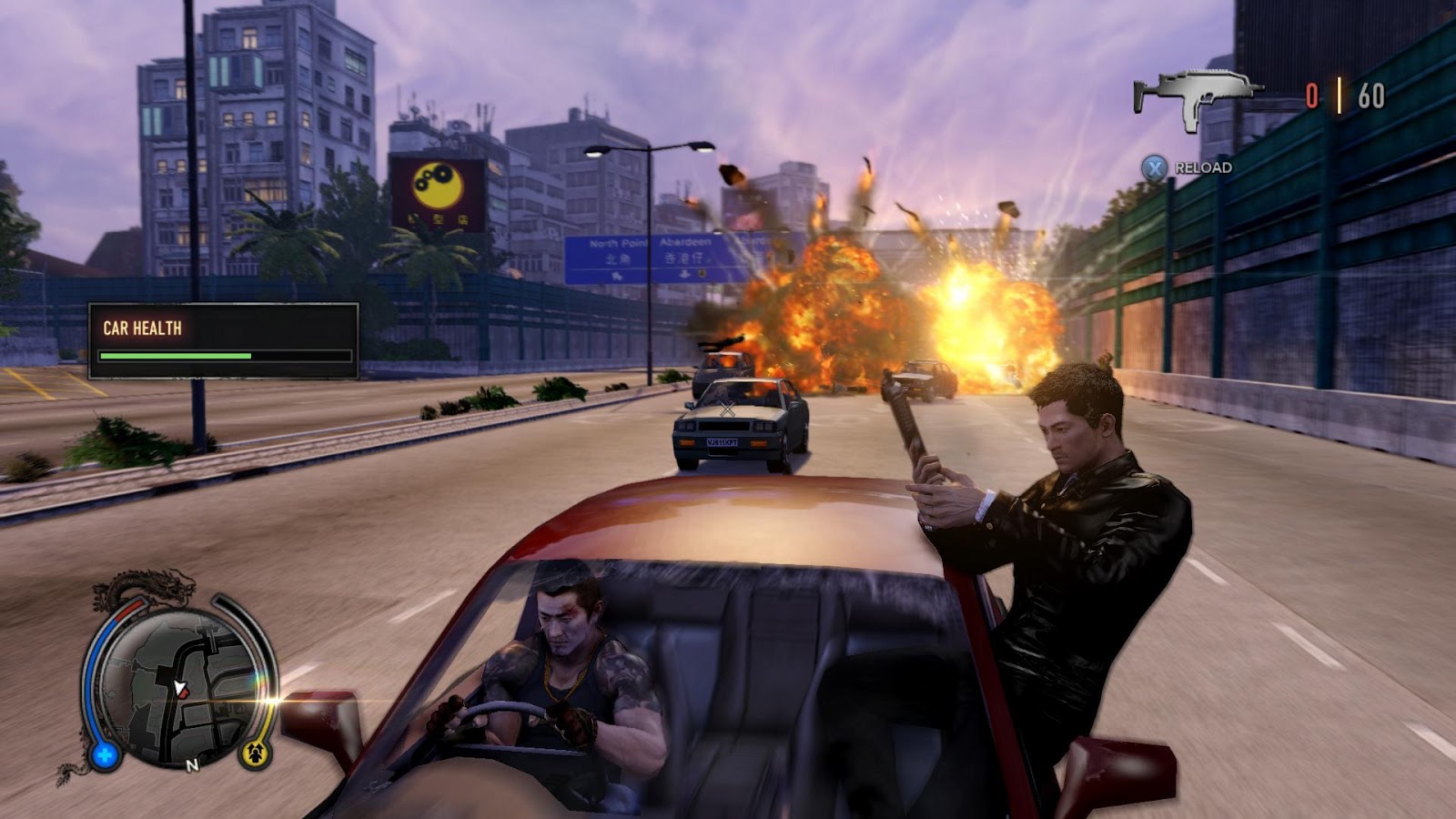 Sleeping Dogs isn't a bad game by any means, and someone who has a deeper love of the genre will enjoy it more than me, but I finished it feeling ultimately unenthusiastic. As an open world action game, I'd rather just replay The Saboteur. As a cinematic character study of organized crime and corruption and doing what you can to hold onto your humanity in a terrible world, I'll stick with the Yakuza games. As a comedy, I'll still stick with Yakuza. As a brawler, I'll stick with Batman. There are a lot of good parts of Sleeping Dogs, but few that are truly great, and it doesn't do anything to increase my appreciation of the genre.