For an extensive history of Q*Bert, be sure to check out this article by Warren Davis.

After the success of Q*Bert in 1982, Neil Burnstein took over from creator Warren Davis and developed Q*Bert's Qubes, a sequel that shook up the familiar formula of the original game. Q*Bert artist Jeff Lee worked with Burnstein and created a new series of monsters to torment the rude orange blob monster hero, including a purple rat that serves as this game's equivalent of the original's snake. Meanwhile, Davis worked on his own sequel, entitled Faster Harder More Challenging Q*Bert which also introduced new enemies and new rules, but was sadly never released. While I'm a big fan of Q*Bert, I actually prefer Qubes to the original game.

In the first game, Q*Bert traveled up and down a pyramid, changing the colors of panels as he landed on them. In Qubes, players guide the portly hero across a five by five grid of disconnected cubes, each with different colors on each side. The direction that players dismount a cube determines how it rotates, and the objective is to rotate as many cubes as possible in order to line up specific colors in a row to clear the stage. The more properly aligned cubes, the more bonus points. Like the original game, there is a constant flow of enemies that work hard to undo your hard work. 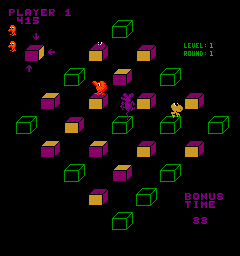 Q*Bert's Qubes in interesting in that it's very easy to rush through the early stages by just focusing on the cubes on one side of the screen, but doing so leaves you with a poor score. In order to actually get decent points, you need to take your time on each stage, flipping over as many cubes as possible, while carefully avoiding forming a completely cleared row until you're ready for the stage to end. It creates a nice extra challenge for players who really want to form a solid plan and take in the whole stage, but being able to clear stages quickly and worry about how many stages they've cleared rather than their overall score is certainly nice for novice players. Like the original game, Qubes has a really gentle learning curve and new players can get a good amount of play out of one credit once they get used to the controls and concept. For more adept players, the game offers selectable difficulty levels. 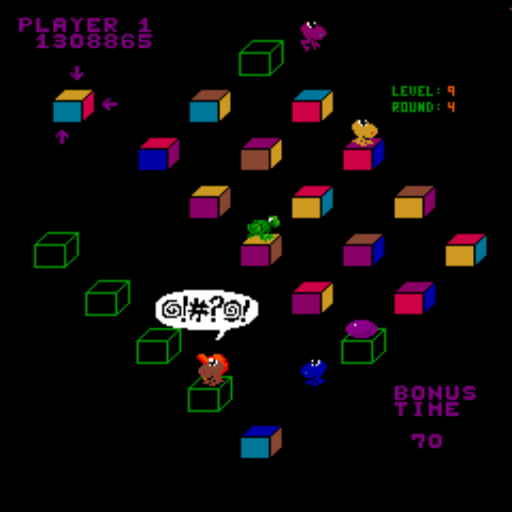 I think it's great that both Q*Bert games offer a distinct experience. They're both absolutely worth playing, and are different enough that you can't just say, "play this one and not the other." It's unfortunate that Davis's Faster Harder More Challenging Q*Bert was unreleased, but at the same time, it's nice to have a sequel that follows the original's spirit while being very much its own thing rather than just a step up in difficulty. In the years that followed the release of Q*Bert's Qubes, there have been a great number of ports and remakes, including an SNES title Q*Bert 3. All of my Q*Berting experience is with the original arcade games and the NES port of the first one, but it may be time for me to track down some of these followups.
Posted by surlaw at 5:37 PM