Sega's 1981 arcade title Space Fury is a vector-graphics shooter in which players pilot a spaceship against waves of enemy fighters commanded by a large-brained alien overlord. The game uses the same control scheme as Atari's 1979 hit Asteroids; two buttons rotate the player's ship left and right, a third fires, and a fourth controls the ship's forward thrust. Ships wrap around the edges of the screen and things quickly get pretty chaotic. Unlike Asteroids, players can upgrade their weapons between stages, giving each wave a unique feel.

Space Fury is a simple and fun take on Asteroids, and I definitely prefer it to the more famous title. While Space Fury was never the hit that Asteroids was, it's a good game and definitely much better than Sega's 1983 Star Trek game which used the same basic gameplay. The enemy ships aren't very exciting in design (and include what may be alien pine trees), but the most memorable part of the game is its alien commander. He appears at the beginning and end, taunting players and offering faint praise if you do well. He has a synthesized voice that's always funny to hear, a good, goofy design reminiscent of the aliens in the original Star Trek pilot episode. This alien definitely adds more to the game's personality than other shooters of the time. 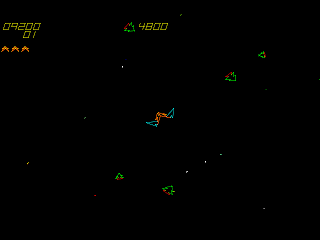 The biggest issue I have with Space Fury is that one of the additional weapons you can earn (the ability to shoot three blasts at once from the front of the ship) makes the enemy waves significantly easier, while the other two are much less effective. Each new power up you earn cancels out the previous one. While the weapons are all different, they're not balanced in a way that makes them all feel worthwhile. It's certainly better than vanilla Asteroids, but isn't perfect. Still, it's hard to fault a game this early in the medium for imperfect balance. Space Fury's definitely worth checking out, and it would be fun to see its alien leader get a cameo or shout out in a modern Sega title. 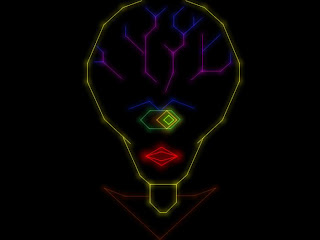