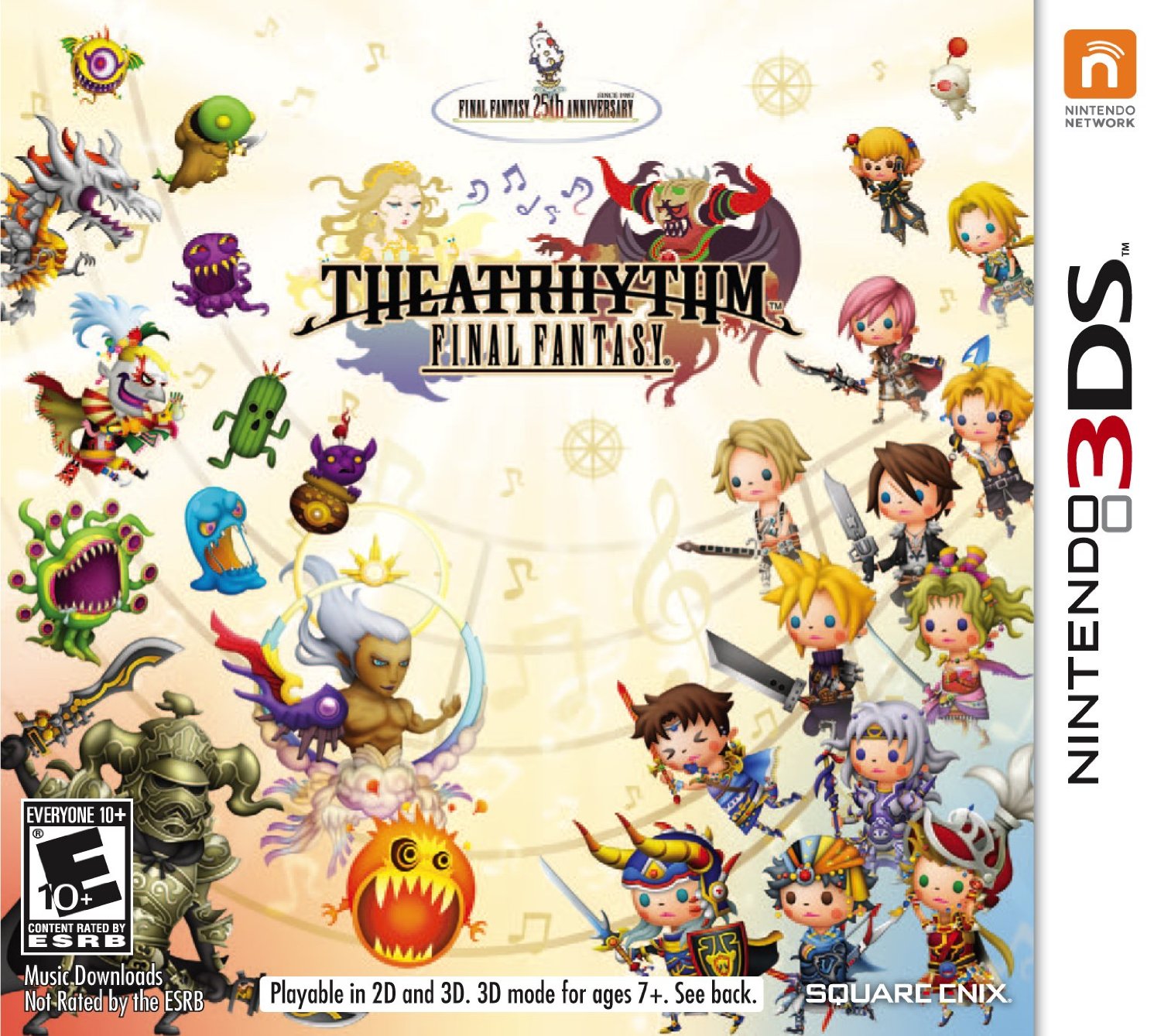 Theatrhythm is probably the most nostalgia-driven game I've ever played and continues a trend started with Dissidia for giving Final Fantasy spinoffs hard to remember nonsense names. It is a rhythm game that uses Final Fantasy music as its base and is filled to the brim with characters, videos, and songs from the first thirteen games in the series. Each game in the series gets three main songs in addition to opening and closing tracks, and there's a ridiculous amount of downloadable songs to add on to the experience. Using marionette-like character graphics for its heroes, Theatrhythm is a unique, immensely charming experience that unfortunately doesn't have a ton of staying power.

Players progress through songs by tapping the screen as notes pass a marker. There are three types of notes: Regular taps, swipe notes that require you to swipe in specific directions, and sustained notes that require you to hold the stylus on the screen for the note's duration. In Field stages, players must move the stylus up and down to match the movement of sustain notes as their hero adventures across an environment inspired by the game its song is from. Battle stages, where players fight cartoonish versions of Final Fantasy enemies, have four note lanes, one for each hero in your party, but which lane the notes fall in is entirely irrelevant. Event stages have a moving note track that traces its way over a video of gameplay or cutscenes from Final Fantasy 1-13. Finally, you have Ending and Opening stages in which players tap a crystal on the center of the screen as bubbles float towards it. While the other three modes are fun, Opening and Ending stages are terribly dull and Square clearly knew this, since they're the only part you're allowed to skip. 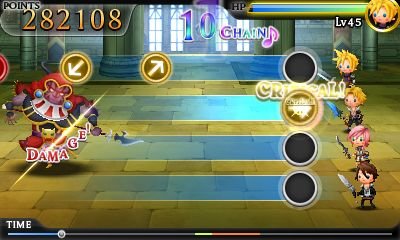 As you complete stages, you will unlock special sets of songs in the Chaos Shrine, where you can play stages, some from the regular game and some unique to this mode, with a faint hope of unlocking crystals required to recruit new heroes. The amount of time it takes to unlock what amount to superficial avatars is confusing at best and stupid at worst.

Parties are formed by selecting four heroes. Initially, you can choose one character from each Final Fantasy, but more are unlocked if you're willing to play for several dozen hours. Each has his or her own stats and spells that very slowly level up as you play. If you want to get high scores, you need to play with abilities turned off, entirely negating a major element of the game, as finishing a stage with no abilities nets you a huge bonus. The game's Normal and Hard difficulty levels are very simple if you have any experience with rhythm games, so abilities are only ever useful for little boosts on harder stages of the game's Ultimate difficulty. There's also some kind of minor story here, but it's best ignored. 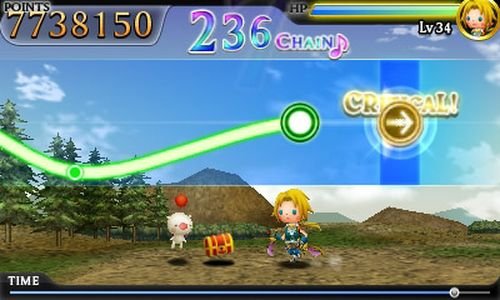 The game's difficulty is really hard for me to come to terms with. I found Normal and Hard almost patronizingly easy to earn top ranks in, but found Ultimate off-puttingly hard. That's totally fine for a top difficulty level, but nothing in the game prepares you for how much more difficult it is, since there's barely a difference between Normal and Hard. Making Hard more more of a challenge, or adding another difficulty in between, would have been a smart move.

There are a few mind-boggling decisions in this game. First, the DLC song store doesn't let you preview songs, so if you don't know the entire 25 year Final Fantasy soundtrack library by name, you're going to spend a lot of time on Youtube seeing which songs you know. Second, it simply takes too long to unlock songs and characters. I only put about six hours into the game before getting tired of it, but in that time I didn't even come close to gathering enough crystals to unlock a single one of the game's extra characters, and I only unlocked one new song. Third, the RPG elements feel really forced and unnecessary. If they had implemented power-ups in an interesting and fun way, as Harmonix did in Rock Band Blitz, it would go a long way to making the game more interesting. Instead, they just activate automatically and don't really change the flow of the game at all. Fourth, the scoring system is pretty arbitrary and not a lot of fun to pay attention to, especially since there's no online leaderboards, something that I find absolutely puzzling in a game so packed with downloadable content. Fifth, almost none of the songs end naturally. Theatrythm just straight imports looping songs from older games without attempting to make them conclude, so almost all of them just fade out at a certain point, some feeling very incomplete. It's done in shockingly amateur manner.

Rock Band Blitz is my gold standard for what a single player rhythm game should be. It's fast, fair, and offers enough options to make playing the same songs over and over feel worthwhile, especially since you can compete for scores with both friends and strangers, and it's only $15. Blitz's gameplay is so much fun that I can even play stages based on songs I absolutely hate, while in Theatrhythm I found myself getting bored when I didn't know the song I was playing. Theatrhythm is charming and gave me some powerful nostalgia, but in the end, there's really not enough to it to hold my attention. I had a lot of fun for the six hours I played, but I can't really imagine going back to it for much more than that.
Posted by surlaw at 5:19 PM