Citadel is the final story-driven DLC release for Mass Effect 3 and marks the official end of the game's development. It follows From Ashes, an almost essential DLC that adds an important new character, Leviathan, which I found to be a mixed bag, and Omega, which had some fun combat but often terrible writing and wasn't worth the price. After being massively let down by Omega, I wasn't expecting much from Citadel. Thankfully, Bioware proved me wrong; Citadel is the fullest, most well made DLC content in the entire Mass Effect series.

The new content in the Citadel DLC can be accessed any time after your encounter with Kai Leng and Udina on the Citadel in the game's main story, but you're best waiting until you've completed everything through the Priority: Horizon mission and all of the side quests involving crew members from the previous games. Everyone alive pops up in this DLC, but if you haven't finished their stories, you're not going to see them. Having all of your squad from the current and previous games alive is pretty important to getting the most out of this DLC.

In this new episode, Commander Shepard is given a luxury apartment on the Citadel to unwind in while the Normandy undergoes repairs. It was formerly Captain Anderson's, and a large number of biographical data pads can be found around the apartment to flesh out his character. Shepard leaves the apartment to grab some sushi with Joker when a group of corny, one-liner spitting space pirates attack. With the aid of well voiced, bumbling Alliance analyst Maya Brooks, Shepard seeks to uncover just what's up with all these pirates and their evil leader. Spoiler: The leader is an Evil Shepard Clone and Brooks is secretly pulling her strings. The entire mission is campy, self aware, and fun. The consciously dumb plot is bolstered by some of the best writing in the game and some fantastic character moments, including the glorious return of Wrex. It's also the only mission where you get to bring everyone along instead of just two squad mates. 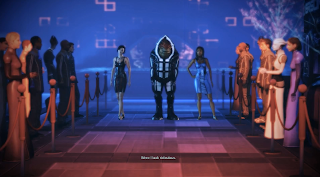 The main mission lasted about two and a half to three hours. That seemed short at first, but it barely scratched the surface of this DLC's content. In addition to its story, the Citadel DLC gives you a new hub to explore and features a huge number of cutscenes with crew members from throughout the series (Grunt recalling his drunken rampage through the Citadel being the highlight) and really fleshes out your relationship with any love interest. In this run through, I ended up with Traynor, and it was good seeing her and Shepard act like an actual couple instead of just having a creepy shower scene. Together, they go to an arcade and bust up some nerds.

There are several playable arcade and casino games present, but none are actually very good. They're sloppy, ugly, and even the claw machine you can use to win prizes from feels poorly designed. This isn't a big issue, since it's a very minor part of the DLC. A bigger side item is the Armax Arena, where players can fight waves of enemies in unique environments and fine-tune modifiers, difficulty level, and squad mates. Playable characters from previous games who weren't playable in Mass Effect 3's base game are available here, so you're finally free to wreck up The Collectors (who appeared in the ME3's multiplayer expansions but not its single player game) with both Wrex and Grunt at the same time. The fights are short, well designed, and actually fun enough to give a couple hours of play. There's even a sub story within the arena, if you keep checking your fan mail. The interface for the arena is poor, but the gameplay is good. 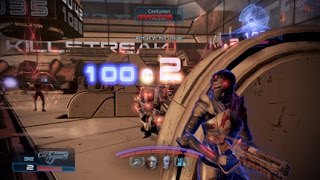 The final content of the Citadel DLC is the best mission a commander could be given: Go nuts and throw a party. You can invite any of your crew as long as their story has been completed, and can choose to either host a casual or a wild party. Save before starting the party so you can do both. I preferred the casual party. It has an incredible scene with Wrex and Grunt and was generally funnier overall and had less awkward dancing. The wild party has an awful conversation between Traynor and EDI about Traynor's attraction to EDI's voice that goes beyond self-aware parody and just becomes gross and embarrassing. Aside from a few bad moments like that and the fact that after two games I still can't stand anything Jack says, the dialogue in the party is pretty fantastic. It feels a little odd that Dr. Chakwas and Kelly Chambers don't get to attend, though.

I'm really impressed with this content overall. It's silly, lighthearted fun, but at the same time has some good sentimental moments, including a funeral for Thane, and gives a sweet farewell to the series. Yes, it's out of tone with the rest of the game, but ultimately, it's so charming and comfortable that it's hard to fault that. I absolutely want to see another game from this team, whether it's Mass Effect or not, with the sense of care and fun that this DLC had. I like the bleakness of Mass Effect 3, but I honestly enjoyed the tone here a lot more. Episodic hijinks suit the writers better than grand epics. Between the story mission, the parties, the character one on ones, and the combat simulator, Citadel lasted me about 7-8 hours, and all of them felt worthwhile. It's a fitting end to the series, and it's absolutely worth checking out even if you're still mad about the actual ending. 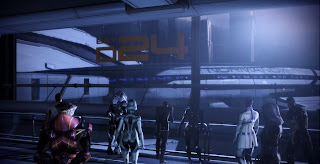