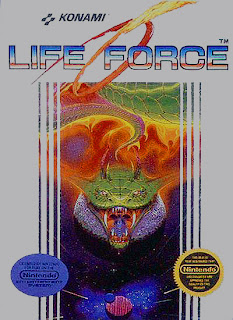 Life Force is a scrolling shooter released on the NES by Konami in 1987. The game features standard genre gameplay, but with a unique theme; you fight giant brains with arms, avoid pointy space-teeth, and dodge fiery indigestion. The ships the player controls are essentially antibodies destroying infections (as well as seemingly normal Space Organs) inside of the giant, planet-eating Space Snake seen on the game's box. Another unique element is that the game alternates viewpoint between each stage, switching between side-scrolling and overhead views. Along the way, you collect items that fill a power-up meter which can be activated when you please, giving you increased speed, missiles, a ring-shaped beam, a laser beam, a force field, or everyone's favorite, Options; little sub-ships that follow you around and double your armament. This game is a Gradius spinoff, and it shows, down to sharing some of the same enemies, but of the two, Life Force is the stronger game.

Life Force was originally released in 1986 in Japanese arcades under the name of Salamander, with a mixture of organic levels and space levels. The game was released in America shortly after and renamed Life Force, at which point some stage graphics were modified to more fully embrace the organic world theme. A little bit of voice work was added to each area, with a narrator yelling things like "Entering stomach muscle" and "cut through the liver," narration which is sadly, but understandably, lost in the NES version. Konami would later re-release the game in Japanese arcades under the American name and further edit its graphics, making things even more organic. Along with visual changes, the Japanese Life Force ditches the original's power-up system and just directly takes the one from Gradius.

Both the Japanese Salamander and American Life Force arcade games used a totally different power-up system from the one in the more well known NES version. Instead of collecting items to proceed along the power-up meter, enemies drop items which immediately grant certain abilities. Because of this, it's possible to get a pair of Options from the very first enemies encountered, rather than having to collect several items before you can even deploy one in the NES port. On top of that, the arcade version allows you to equip four Options, while the NES one limits you to two. This would seemingly make the arcade version a lot easier, but it makes up for its more generous upgrade system in other ways; the arcade game is much faster than the home port, has far more enemies per screen, and does not allow you to continue from a game over. You can pump quarters in to add more lives to your current run (if this option is enabled; on the machine I've played on at FunSpot, it doesn't seem to be), but even this only allows for a limited number. I've never personally made it beyond the third stage in the arcade.

The NES release of Life Force is a sort of hybrid of these versions. It features the mix of organic backgrounds and star fields of the original Japanese arcade game while using the Gradius-inspired upgrade system of the later re-release. It's a much slower game and features smaller and fewer enemies. There are a couple bits that are harder in the NES version, but not many, the most notable being the volcanoes in the second stage which spew far more debris than they did in the arcade game (I shamefully didn't know the volcanoes could be destroyed until replaying the game today.) While there are still a lot of cheap moments where you're going to die unless you've played the game and know what's coming, the NES game is fairer than the arcade version, and definitely easier than Gradius.

A big part of what makes the NES Gradius so hard is the fact that when you die, you're returned to an earlier checkpoint with no items. Life Force still takes most of your items from you when you're shot down, but you come back right where you died with no need to repeat earlier segments. If you're lucky and quick, you can even retrieve your Options before they get scrolled off the screen. While it's still a tough game (unless you use the Konami Code to give yourself 30 lives), this mitigates a bit of Life Force's difficulty, and makes it more relaxing to play through than Gradius. Another important difference is that while Gradius lets two players take turns between lives, Life Force offers full simultaneous co-op play. This is a lot of fun, even if it makes the game much harder by forcing players to divide power-ups between them.

The biggest problem with Life Force is also the biggest problem with Gradius; if you have your power-ups maxed out, the game's pretty easy, but if you die once, you can be completely screwed. Bosses are actually pretty fair and can be beaten with only your basic weapon, but parts of this game's six stages are absolutely miserable if you're underpowered. Life Force relies on memorization to avoid getting stuck with junk weapons, since there's really no way to react in time to some of the instantly appearing barriers that get thrown at you.

The NES port looks nice and your ship animates well, but it's absolutely plagued with slowdown. This can be used to your advantage at times, as firing lasers in a busy stage with two Options equipped is practically guaranteed to slow the game, but for the most part it's a little bit irritating. The arcade versions have more detailed backgrounds, but there's nothing wrong with the graphics in the home port. Musically, the arcade version offers higher fidelity sound, but the NES soundtrack still sounds great. I've got no complaints here, even if I do miss the narrator yelling "Kidney stones cannot be destroyed!" You know my pain all too well, Space Narrator.

Overall, Life Force is a solid NES shooter and a fun, if ridiculously hard, arcade game. If you play co-op with a buddy and enter the Konami Code to give you each thirty lives, you'll be free to mess around and have a good time without worrying about screwing up. If you're playing with the standard number of lives, your buddy will make the game harder than playing solo each time they eat a power-up. The game takes about a half an hour to beat if you don't have to continue, but even if you do it's not particularly long. There's enough variety in enemies and locations to keep the game fun without overstaying its welcome, so the short length isn't really a problem. The game goes off the rails a bit towards the end when you switch from fighting brains, skulls, and Indigestion Dragons to fighting the flying head of Space Tutankhamen and bouncy Easter Island statues, but that's part of its weird, wild charm.
Posted by surlaw at 5:58 PM