Review - A Boy and His Blob: Trouble on Blobolonia A Boy and His Blob was one of those NES games that I'd rent back in the day, try to play, fail terribly, and return, but always come back to. I never owned a copy until recently picking one up at Core Gaming in Salem, MA, and I had never come close to completing it until tonight. I know why I wanted to like this game; it has very pleasant music, great art design, and a great concept. Players control a boy who befriends a jolly white blob that changes into various tools after eating jellybeans. The two of them scour the New York underground in search of treasure until they're ready to fly off to Blobolonia, the blob's home world, and free it from an evil king. It sounds great and looks great but, sadly, the actual game is terrible.


Movement is slippery, the blob sometimes totally misses the jellybeans you throw even when he's right next to you, hit detection is wacky, and it's hard to tell how high you can safely fall without dying. These are all problems, but I could ignore them all if not for A Boy and His Blob's biggest, hardest to ignore fault; it's a game focused on exploration and experimentation that stifles both through keeping with video game norms of the time. You have a limited number of lives as well as a limited number of jellybeans, and given how often the blob will miss a bean, how big the game's world is, and how often you'll fall to your death/slip into an enemy even when you know exactly what you're doing, these old gaming standards really have no place here. 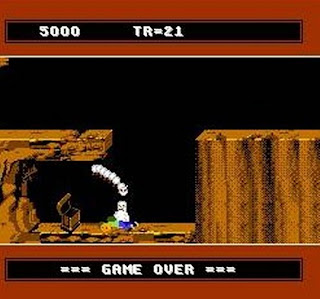 I enjoy difficult games, but A Boy and His Blob is not so much difficult as it is incredibly tedious and unfair. Getting to the end of the game and not being able to proceed because you messed around with too many jellybeans earlier on is not a good, fair challenge. Having five potential screens to drop through, with four leading to instant death and only one leading to safety, is not a challenge, it's an exercise in memorization which when failed forces you to restart the entire game. Getting almost to the end and having an enemy kill you by exploding off screen (Floating cherries cause deadly explosions here) is obnoxious and not at all fair game design. Trampoline jumps that control terribly but require pixel-perfect coordination are awful when dying a couple of times means you've just lost 45 minutes of progress.

Eventually, I gave up on trying to play through this game legitimately and used a Game Genie to give myself unlimited lives and beans. This was a much more enjoyable experience, though the game was still too tedious too often. There are around twenty treasures to find below the streets of New York, but eight of them are all clustered in one area at the bottom and many halls are long and totally empty, leaving me wondering why at least some of the treasures weren't placed there instead. The game's map design is haphazard and illogical, and not in a fun, puzzling way. 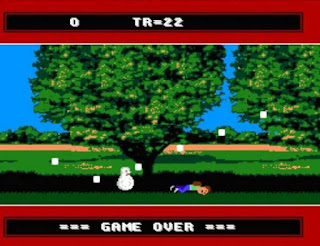 Through most of the game, you'll only regularly use a few types of jellybeans to transform your blob. Punch (hole) and licorice (ladder) are used almost constantly, and vanilla (umbrella) and tangerine (trampoline) get a good amount of use. Strawberry (bridge) gets a few uses. The Cola (bubble) jellybean is used for only one area, the apple (jack) bean is used twice, cinnamon (blow torch) is only used once, as is root beer (rocket). There's a coconut jellybean that turns the blob into a coconut, but its form is more that of a bowling ball. You can pick this ball up and hurl it and hope the camera follows him so that you can see what's on the next screen. I found this to be a waste since more often than not, the camera would not follow him, negating the entire purpose of this item. You can use a honey (humingbird) bean to get the blob up to you if he falls off a ledge, or a ketchup one to make him teleport to you. The number of ketchup beans you receive is very limited. The game doesn't tell you what each bean does, which is especially frustrating since some are so scarce.

Eventually, you'll find an orange bean that can turn the blob into a gun and a lime bean that can turn him into a key. You only get two lime beans, so make sure you don't use them until the final room of the game or else it's time to reset! Once you're done treasure hunting, you can go to a vitamin shop near the game's starting point and buy vitamin-based ammo for your orange bean cannon. Once you board the Root Beer Rocket and take off for Planet Blobolonia, you're ready to arm yourself and shoot down various junk foods and avoid deadly teeth.

This whole concept does sound fun on paper, but the execution is so messy that the game really isn't any good. Reading its history, I'm not entirely surprised; the game was made on a six week deadline almost entirely by two men, David Crane (who gets his name above the game's title on its title screen) and Garry Kitchen. Crane is most known for programming Pitfall and several other old Atari and Activision titles. After the success of A Boy and His Blob, Crane would go on to develop three abysmal Simpsons themed games, a 2D platformer based on Home Improvement, a Genesis game based on the movie Toys, and the infamously terrible Night Trap before his programming and directing career came to a close in the mid-90's.

I'm honestly sad that Crane's career took the path it did. A Boy and His Blob is tremendously flawed but shows a great deal of creativity and its art design and animation still looks pretty nice. The guy who made Pitfall and A Boy and His Blob deserved better than the path his game design career took. He also designed a Game Boy sequel to A Boy and His Blob that I'd like to check out, but aside from that and a tennis game that seems to have decent reviews, his post-Blob output is miserable. 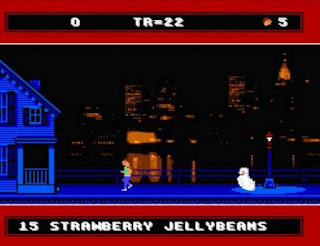 As much as it pains me to say it, A Boy and His Blob is not worth playing. The music is worth listening to if you like NES style music and the charming art design is worth starting the game up and running around for a little while, but actually playing and completing the game is such a taxing endeavor that I can't recommend giving it a shot. WayForward's 2009 remake of the same name, minus the subtitle, is a far more polished experience that maintains and ups the charm of the original while eliminating the parts that make the NES game so bad.
Posted by surlaw at 10:37 PM

Email ThisBlogThis!Share to TwitterShare to FacebookShare to Pinterest
Labels: a boy and his blob, NES, reviews