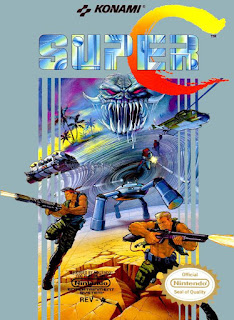 In 1988, Konami released an arcade sequel to their hit platformer/shooter, Contra. Titled Super Contra, the game would be ported to the NES in early 1990 and released in North America under the title Super C, in one of the more unnecessary name changes of the 8-bit era. I've unfortunately never played the arcade version. There's a port of it available on the Xbox Marketplace, and unlike the original Contra, the Xbox version doesn't seem to have been uglied up with bad, additional explosion effects. This review will cover the NES release, which remains my favorite Contra title.

The NES version adds several levels, a few new bosses, and handles power ups differently from the arcade version. In the arcade game, players can upgrade weapons by picking up multiple copies of the same weapon. This option is used in future Contra titles, but isn't present in the NES version. Instead, its weapon layout is pretty much identical to the first game's, only with the rarely useful flamethrower replaced by an explosive fireball attack that can be charged by holding the fire button. Your rate of fire is upped from the first NES title, creating a feel closer to the original arcade version of Contra. There's far less slowdown, stages are more complicated, and the Spread Cannon isn't the one single best weapon in every situation. Overall, aside from the music being a little less catchy, Super C is a superior game to the original.

Like the first Contra, most stages are sidescrollers, occasionally interrupted by base missions. While Contra's base missions follow your character from a behind the shoulder perspective, Super C uses a top-down view for its version. These missions are a lot more fun than the base missions in the first game; they're much more exciting and offer more gameplay variety. The bosses of these areas are also fought from the top-down view, unlike the original game where the camera switches to sidescrolling again once you reach a boss.

As far as difficulty goes, I definitely think Super C is an easier, more approachable game than the original. I usually complete the game using one continue, whereas I generally burn through two or three in a playthrough of the original, in spite of the fact that I've played the original a lot more. Like the first game, you're rewarded for taking things slow, proceeding one step at a time. This is especially evident in a stage in which the ground falls apart as you proceed; as long as you don't run full charge, this zone is quite easy to manage. Bosses are more fair, and none are as overwhelming as the harder ones in the first game. There are a couple of jumps that require more pixel precision than before, but not too many.

One big change is that this game does not support The Konami Code. If you relied on all 30 free lives it earned you in the first game, you're probably going to be annoyed by this. There's a different code that gives you ten lives per continue, and honestly, this is plenty. Super C is not an easy game, but it's more reasonable than the original and you earn extra lives pretty quickly.

Overall, Super C feels more like a refinement of the original Contra than a full sequel. Its mechanics and its graphics are improved and its stage design is more fair. You can still dominate using the Spread Cannon, but it's less necessary than before; even your default gun is enough for most parts of the game. The base stages were my least favorite part of the original, so I greatly prefer the top-down ones Konami gave us in Super C. The original game is more well known, but I definitely prefer this one. Unlike the first Contra, this game is available on the Wii Virtual Console if you don't want to track down the NES cartridge. Also of note: This game contains even more Alien references than the first game, down to the final boss having one of its heads look sort of like the Space Jockey. We'll never get an Alien vs. Schwarzenegger vs. Rambo movie, so the old Contra games will have to do.
Posted by surlaw at 8:21 PM