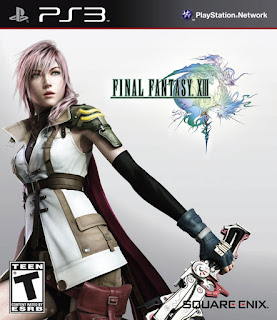 The Final Fantasy series has always been known for trying new things with each installment, but from its Playstation 2 installments forward, I've felt that the series has been having an identity crisis. Final Fantasies IV through IX all use active turn based systems, with wait times for action gauges to fill before you can use an action while monsters attack you. X used a more old school, purely turn based system, which I thought worked really well. XI took the form of an online MMORPG, cutting me off from any interest in playing it. XII eliminated random battles and allowed players to fight monsters directly as they encounter them, but still uses menus, focusing largely on constructing strategies for your AI partners to follow. Final Fantasy XIII continues along a similar line, but features a more simplified battle system, a far more linear world, and fewer options for players. It's nice to have variety between titles, but I don't really understand what the Final Fantasy series wants to be right now, and I don't believe Square does either. That said; I had fun playing through XIII, though its problems are more than evident.


Final Fantasy XIII's battle system is among the fastest in the series, and I certainly appreciate that. There's little downtime, battles are short, and there's almost no loading when going into and out of them. Unlike XII, battles in XIII once again take place on a separate battle field screen, but XIII kept the idea of eliminating random battles. Battles occur in scripted locations and can be refought after leaving an area. Once engaged in battle, players control a single character while up to two AI partners fight. During battle, players can press a button to bring up the Paradigm System, which is a fancy, buzzword name for this game's job/class system. Through this, you can select a class layout that you construct from the game's menu outside of battle and let your AIs go wild. You'll be switching constantly, and this results in a fast-paced, exciting battle system, even if you don't have a great deal of direct control.

There are six classes in this game. Since FFXIII tries to be more modern sci-fi and less fantasy sci-fi, instead of names like Knight and Black Mage, we get Commando (physical fighter), Ravager (magician), Sentinel (defense oriented/tank), Synergist (stat buffer), Saboteur (stat debuffer), and Medic. Medic is the only one I don't find awkward to read. Calling the game's magic class "Ravager" still really bugs me. It sounds terrible and it's completely nondescript. Each character has a couple of classes they're best at, but can by the end of the game have at least some skills in all. After battle, players earn Crystarium Points that can be spent to level up each individual class per character instead of the character overall. Class growth is like a more rigid version of FFX's Sphere Grid system; not totally free, but not 100% linear. Each area has a level cap that prevents you from grinding through to trivialize the area.

Battles are fun once you have three characters available. If you only have two, they're mediocre. If you're stuck with one, they're terrible. It takes the game a while to get going, but as you get more characters and skills, battles do feel rewarding, and it's nice to grow your stats slightly after every couple battles. Each character eventually earns an Eidolon, a giant summoned monster that can be called forth in battle and, perhaps stupidly, perhaps hilariously, sometimes turn into a car. Due to limits in the battle system and the level cap per area, boss battles often feel more like puzzles and less like reactive combat, but that's fine. It's a different approach, but it works, and it's often pretty fun. The Eidolon fights and some later boss battles are legitimately tough until you find a working strategy, and since there's no consequence of death (you can immediately retry any fight you lose) it's fun to experiment.

There are no Magic Points in this game, so you're free to use almost any attack at any time. You're limited in how often you can summon Eidolons and certain super moves can't be used repeatedly, but for the most part you can do whatever you like without worrying about running out. Because of this, you're free to spend a lot of time buffing/debuffing characters without concern with rationing spells, and this plays a huge role in the game's battles. There's absolutely no useless role in battle, which is refreshing. Enemies have traditional HP, but also have a Stagger Bar that grows when the enemy is hit by magical attacks. Once the bar fills up, the enemy can be hit for huge damage. Properly managing enemy Stagger Bars is a fun addition to the game's strategy. 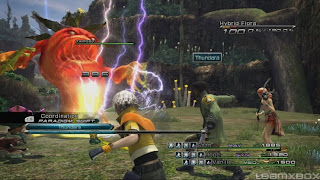 Outside of battle, you're very, very limited. Dungeons are often branchless, linear experiences that look gorgeous but don't offer anything in the way of puzzles or exploration. You can equip accessories, but no armor. Weapon upgrading is pointlessly convoluted and most weapons you find aren't useful. There are no towns to explore, no NPCs to interact with, and all shopping is done through generic spheres that are also used for saving progress. There's one chapter towards the end in which the game opens up, but doing anything there requires an offensive amount of walking across empty fields.

The story focuses on six characters who have all been branded by the fal'Cie, the game's demigods who rule Cocoon, a floating biosphere, to become l'Cie, magical fighters who must complete a specific, unknown task lest they be turned into Cie'th, which are basically zombies. If they succeed, they are turned into crystal forever, unless the plot decides otherwise. There are two things to take from this: One, that Square is terrible at naming things, a lesson you could also take from this game's class system, and two, that the heroes are in a complete no-win situation. I found that element of the story compelling, and I liked seeing six characters who don't get along at all overcoming their differences to fight against fate. At its core, FFXIII has a sad, interesting story about the inevitability of death, but it's buried under layers of terrible writing that reigns among the worst in the series.

The main hero is Lightning, a soldier whose sister, Serah, gets turned to crystal. She's strong, loyal, and angry, outcast from a society she once served. Lightning is competent in a way Final Fantasy leads often aren't, but still comes off as human. She detests Snow, her sister's fiance, a man with a heroism complex that makes him look like a pompous, overinflated jerk. It's hard not to agree with Lightning on this one. Snow joins the party along with Hope, a young boy who loses his mother and blames Snow, and Sazh, an audience stand-in, too old for this crap everyman who for no reason has a Chocobo living in his afro. He is trying to save his son, who like Serah has been crystalized. They are later joined by the overly peppy Vanille and protective Fang, two women from Pulse, the world which Cocoon hovers above. Everyone starts out bitter and resentful towards one another, but eventually these six mellow out and grow as people and into a family.

I like the outline of the plot and most of its heroes. The villains are all forgettable non-entities for the majority of the game, but it sort of works, in that the true threat comes from society and from the gods. They SHOULD be vague, ethereal, and hard for our heroes to understand, but by the end, the main villain is revealed to be a mechanical space pope who cackles like a Saturday morning cartoon bad guy. He intends to use our heroes to kill everyone everywhere so that he can get God's attention and get him to come back and hang out again. It's funny, but it's not intended to be, and it's tonally at odds with the rest of the game. 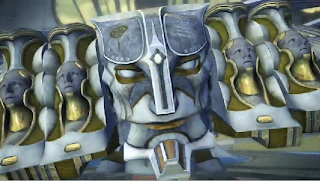 The plot has a solid foundation and the inter-party banter is fun, but this game's writing is flat out bad. A lot of the conversations among our heroes aren't terrible, but every moment that the game tries to be deeper its weaknesses just become more apparent. Part of this is a consequence of localization; a lot of phrases come off really stilted and expository scenes are often bloated in addition to not actually making a lot of sense. The voice acting ranges from decent (Sazh's actor plays his part perfectly) to uncomfortable (Vanille's embarrassing battle noises), but I can't really fault the actors for the problems here. No actor could make some of this game's terrible writing sound natural.

Visually, this game is very impressive. Environments look great, characters are well animated, and monster designs are nice, even if too many end up being palette swaps of base monsters. The soundtrack is almost entirely forgettable and feels like elevator music. The songs aren't all bad, but there's not one that stuck in my head after finishing the game.

There are a lot of things I like in this game. Lightning is a likeable but imperfect lead, and I appreciated that for once, a Final Fantasy protagonist admits that she came up with her own terrible name (her real name is Claire). Sazh is great, and having a character who actually reacts to all of the insanity he encounters the way a real person would is absolutely necessary and often lacking in RPGs. I like that both Hope and Snow grow up and learn to stop being such dopes, even if Hope does a much better job of it than Snow. I like Vanille using her peppiness to cover up a dark past that unfortunately was spoiled for me by reading the in-game Datalog too early. Fang is one of my favorites of this crew, and I like that she's allowed to be feminine while still being a hunter/warrior without feeling exploitative at all. I appreciate that her relationship with Vanille is subtle and realistic, and not even remotely played for fan service.

I'm able to overlook the terrible way in which the story is told and its absolutely bare bones dungeons and enjoy its characters and combat, but I realize that that's a lot to ask, especially in a game focuses as heavily on narrative as this one does. It hurts to realize that under all the garbage, there's actually something really good here, and that through internal incompetence it completely fails to meet its own expectations. I was hoping Final Fantasy XIII-2 would improve on this game's flaws, but it adds its own problems while not fixing this game's biggest one: Final Fantasy XIII's narrative writing and plot structure is among the worst I've seen in a modern, big-budget title. I enjoyed the game, but I can't recommend it to others without a whole boatload of disclaimers, and that's absolutely sad.
Posted by surlaw at 1:21 PM