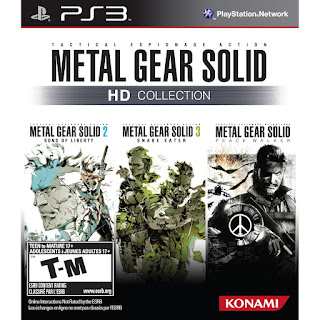 The latest installment of the Metal Gear series, Metal Gear Solid: Peace Walker, was originally released on the PSP in 2010 before being upgraded and ported to the Playstation 3 a year and a half later as part of the Metal Gear Solid HD Collection. This review will focus on the PS3 version, though almost all comments apply equally to both versions. The game relies heavily on online cooperative play, a system that required jumping through a lot of hoops to get working on the PSP. The HD port, on top of touched up graphics and refined controls (The PS3 version uses the left stick to move and right stick to aim, the PSP version used the system's analog nub to move and face buttons to aim), finally has a fully integrated online system that works great, but how well does this game measure up to the rest of the series?

I had played the previous PSP Metal Gear spinoff, Portable Ops, a few years before Peace Walker's release and had fun but didn't find the overall experience very memorable. I had much more interest in Peace Walker by the time it had been announced, due in large part to the fact that this one was actually directed by Hideo Kojima and Portable Ops was not (neither were the two Metal Gear Acid PSP spinoffs.)

Peace Walker promised to tell the story of how Big Boss turned form the lovable doofus we played as in Metal Gear Solid 3 to the raving lunatic of the MSX Metal Gear games. It definitely tries to do that; the game begins with Naked Snake/Big Boss leading the mercenary group Militaires Sans Frontières into Costa Rica years after Snake Eater to fight off an invading force, and ends with him giving a pretty great speech about Outer Heaven. 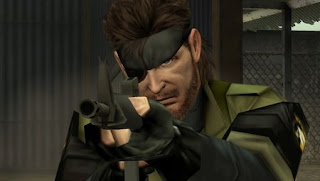 The problem with this game is the immense amount of filler. I think the core story about Big Boss's mercenary group works well, and I think his descent into madness is subtle but convincing (He has carved a snake shaped scar into his chest to mirror that of The Boss in MGS3). He receives support from Miller, the survival expert Solid Snake met in Metal Gear 2, only his first name has been retconned from McDonnell to Kazuhira, and Amanda Libre, the young leader of the Costa Rican resistance. These two characters work well, and Big Boss's relationships with them are fun to watch unfold. If the story focused entirely on the war in Costa Rica and Big Boss's disillusionment with America (The invasion is led by Hot Coldman, a former CIA director who is not nearly as entertaining as his name) it would be a stronger title, but there's also a lot of focus on AI development (in order to tie it into Metal Gear Solid 2 and 4) that feels flimsy at best. 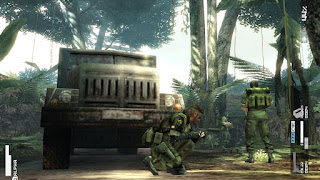 On top of the story taking too long to reach its conclusion, gameplay also gets dragged out. Weapons are no longer simply found and then usable but must instead be found, researched, and then upgraded using engineering resources at your home base. You'll repeat short missions in order to grind out time for weapons/items to become upgraded/usable. Making things worse, the final missions of the game cannot be played without repeating previous missions or grinding out side missions in between. If you want to see the game's true ending and fight its true final boss, you're going to have to spend a lot of time on repetitive side content.

The game is divided between regular Metal Gear style missions (albeit in much smaller locations with far fewer guards) and base management. Big Boss's group controls an oil platform in the Caribbean that grows and changes as the story progresses and you capture enemy soldiers or Costa Rican hostages and indoctrinate them into your army. While it's pretty funny to strap balloons to enemies and have them float off to your homebase where they'll quickly become your buddies, it becomes a tedious process that you'll repeat over and over again to find the soldiers with the best stats to pad out your research/medical/combat units. These soldiers can be sent off to fight in battles called Outer Ops that the player has no control over. You have to grind through dozens of effortless wins before getting to harder Outer Ops missions with actual rewards. 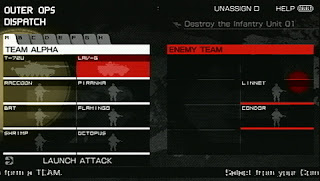 I was hoping base management would be more like XCOM, where I had incoming resources to spend where I pleased and had more of a choice in how my base grew. Instead, the base just feels like one big virtual pet that needs to be maintained in the most repetitive, unrewarding methods possible. This, along with the repetitive nature of the game's missions, really brought the whole game down for me pretty hard. There are more side missions to play through than core story missions, but most of them involve tediously fighting vehicles that take forever to destroy, waves of dozens and dozens of soldiers, or, bizarrely, giant dragons from Monster Hunter (that also take forever to defeat and are very funny but not actually fun). It's fun to play these missions every now and then online with three other players because it's always fun to goof around with other people, but they're really not fun to do solo. 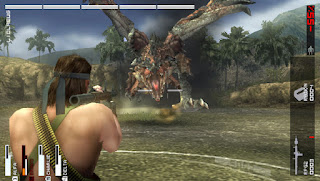 I do like that all missions can be played in co-op mode, both story and side missions. It's the only way to make the optional boss fights tolerable, and it makes the main missions a lot more fun too, although they end up being overly easy with friends. However, it does feel wrong to have four players all look like Big Boss (you can also choose to play as faceless soldiers who by the end have better stats than Big Boss) and it's annoying to sit through another player's cutscenes every time when you just want to skip ahead to the ranking screen. 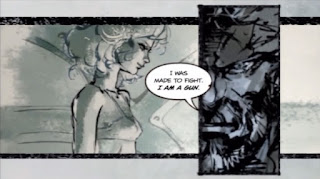 Aside from the tediousness of unlocking story missions and base management, I also just didn't feel compelled by this game's characters. For the first time in the Solid series, there's no memorable central villain leading the charge, and the supporting villains are just regular people with slightly over the top personalities. There's no one as funny as The Pain, no one as creative as Psycho Mantis, no one as asinine as Fat Man, and no one as creepy as Laughing Octopus. Every boss battle involves fighting a nameless enemy soldier piloting a tank, helicopter, or other military vehicle until the very end when you fight this game's final bosses, which are both Metal Gear type-fights. The last one sings J-pop to you while you fight it.

This time around, there are two Metal Gear types. On your base, you can construct Metal Gear ZEKE through the assistance of Dr. Huey Emmerich, Otacon's dad who looks exactly like him, acts exactly like him, falls in love with a woman he should never be with, and has pretty much the same rapport with Big Boss that Solid Snake and Otacon have later. The only real difference between the two characters is that Emmerich Sr. is in a wheelchair. The characters even comment that they seem familiar. This should feel like a minor in-joke, but instead feels like laziness. I know history repeating is a theme of the series, but this is a bit much. 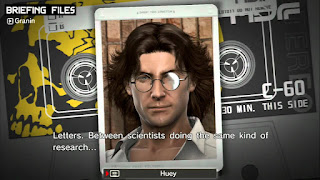 The other giant robot is the titular Peace Walker, an AI controlled device meant to somehow make the world more peaceful by threatening it with nuclear oblivion. The AI has the guts to destroy the world, while a human might hesitate, and therefore no one will want to use nuclear weapons again. It's not a very convincing Villainous Plan.


Heading the Peace Walker project under the orders of Hot Coldman is Dr. Strangelove, a woman named both for her connection to nuclear weapons and the fact that she's bisexual (and was in love with The Boss, because since MGS4 every single supporting character must be tied together to the series mythology.) Aside from an enormously creepy hidden conversation, she's actually a well written character, and is the only antagonist that is remotely interesting, even if her tie to MGS3 feels really cheap. To the surprise of no one, Otacon's dad falls in love with her. Strangelove is working on AI devices that would later become The Patriots as we know them in MGS4, making this the first time Kojima didn't completely change his mind over what The Patriots are supposed to be between games. 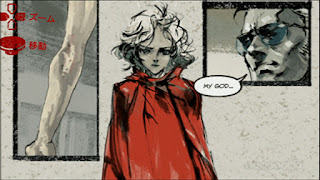 Big Boss also spends time with teenager Paz "Pacifica Ocean" Ortega Andrade and her instructor, Ramon Galvez Mena, a guy who we're supposed to believe is an ally at first but is really obviously going to be a villain right away. Because Kojima has become creepier as the Metal Gear series progresses, players learn that they can use the controller's face buttons to manipulate cutscenes in Paz's introduction, where the player is taught how to zoom in on her graphic and undress her down to underwear as they zoom in. You can also go on dates with Paz after clearing the game and snuggle her inside a cardboard box. At least you can choose to do the same with Miller as well.

Overall, I think this is the worst game in Kojima's series. It's not terrible by any means, but it's just far less solid and coherent in game design than the rest of the Metal Gears. Portable Ops plays worse, but is less creepy and I didn't feel like I had to grind quite so much. The combat and sneaking in Peace Walker is quite good, and it's fun to chain throws together and knock out a half dozen soldiers in sequence, but the maps aren't too exciting, you have to replay them too often, and the bosses are bland. I'm not exaggerating when I say this game has the most uninteresting boss fights in the entire series, including the MSX titles. 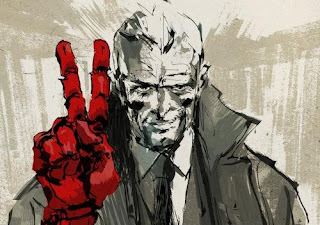 The story ranges from stupid (and not in the fun way) to exciting, but there's too much junk in between and it's hard to care about some of these characters. The writing in this series has never been subtle, but it's blunter here than ever. Cutscenes are told through comic book panels instead of animated movies, and while the art's great it does get a little boring, though less so than Codec conversations in the older games (speaking of which: All radio conversations now play over the action as you sneak/fight, which is a fantastic addition.)

If you love grinding and maxing out stats, there's a lot to do here. If you want a more traditional Metal Gear experience, you're better off with any of the other games in the series. The Metal Gear Solid series has escalated the insanity of its world in nearly every game, but this one feels like an odd step back, in spite a villain with a rocket-powered arm and a giant singing robot. It's going to be hard to ever top Ocelot's dancing fool routine in MGS4.
Posted by surlaw at 1:15 PM