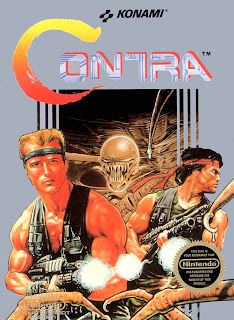 A year after its release in arcades, Konami ported its shooter/platformer Contra to the NES. The core gameplay is the same between the two versions; for a summary of the basic gameplay, please read my review of the arcade version. The 1988 home version is a harder and longer game with downgraded graphics and simpler, but still fantastic, music. Contra is famous in part for being one of the first big games to allow use of the infamous Konami Code to cheat and boost your starting lives from three to thirty, allowing the game to be played much more casually. It's a perfectly acceptable port, but definitely not as good as the arcade original and contains several significant changes.


Contra NES's length is the most significant difference; while I can complete the arcade version in approximately 15 minutes, the NES version takes me around 25, and that's after years of practice. Like the arcade version, you can only continue four times before being booted back to the title screen, but unlike the arcade game, continuing restarts you at the beginning of a stage instead of right where you last died. This makes the game much harder, especially on later levels, and with each level being longer than its arcade equivalent, the NES game is definitely more difficult, with a couple of exceptions. The boss of the second 3D base stage is much easier on the NES, since due to the system's resources it can't fire nearly as many projectiles. This same reason also makes the final stage and final boss far, far easier on the NES. In fact, the final boss is one of the easier ones on the NES, while it's a merciless monster on the arcade version.

Some bosses are harder, such as the armored frisbee throwing jerk you fight before the factory zone, and some are completely changed. The miniboss that opens the snow field area in the arcade version instead appears at the end of the stage, and is far less dangerous. The boss of the waterfall stage is entirely different; instead of a series of cannons and soldiers, you fight a giant fire breathing alien. 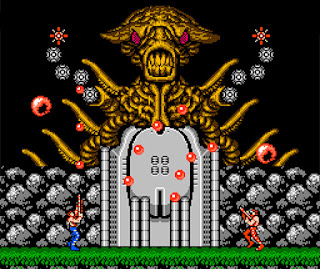 The overall game is also harder because some weapons, namely the default gun and the flamethrower, are a lot less effective and because the game suffers from pretty bad sprite flickering when there's a lot of stuff on screen. The simpler graphics cause everything to blend together more, making enemy bullets harder to see. There are also a couple of really cheap moments not present in the arcade version such as spiked walls in the factory stage that pop out of the ground without warning. If you know where they are, they're harmless. If you don't, you're going to die. Platforming now requires more precision than the arcade version, and there are one or two really mean jumps. The 3D base stages no longer have time limits but are longer and more difficult, even if their bosses are definitely easier here than in the arcade. The NES version takes a challenging game and makes it harder, but not in a more rewarding way. It's not an impossible game by any means, but it's not as approachable as the arcade edition. 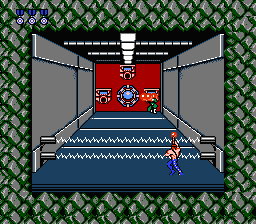 There are a couple of changes in the NES version that I prefer. The invincibility power up from the arcade game returns and can be obtained at any time in the stages it appears in, regardless of what power ups you've already gained. All weapon power ups now look like the Contra insignia plus the first letter of that weapon, while in the arcade this was true of most power ups, but not the laser or machine gun. It's more visually consistent and makes it impossible to be confused about what a power up does once you've found it once. This is a minor thing, but I prefer the NES box art over the arcade marquee. I definitely prefer the final stage in the NES version. It's disappointing that the final four stages are all separated by title cards instead of being one large, organic level like in the arcade, but given that the NES version resets you to the start of the stage when you continue, this is definitely for the best.

Contra NES is a weird game because for the most part, I'm used to home ports of arcade games being easier than their arcade equivalent. Until the final stage, this is definitely not the case here. The arcade version is more tightly designed, better paced, and more fair, but I'm absolutely not saying that the NES version is a bad game. On the contrary, it remains one of my favorite NES games, even if I prefer the NES version of Super Contra to the original. Both versions are worth playing, but there's no real argument that the NES version is just not as good. One last little complaint is that the NES version does track your score, but it's only displayed in between levels, so while playing you have no idea what enemies are worth or how much longer you have to go to your next extra life. If you're going to play using the Konami Code, this won't matter anyway.
Posted by surlaw at 4:54 PM