Konami's 1987 platformer/shooter Contra is a classic of the genre and remains one of its strongest specimens. While there have been around a dozen sequels, I honestly don't think any of them are as good as the original game, though its very first sequel, Super Contra, comes close. While its sequels drown out the play field in bullets, explosions, monsters, and speed, the original Contra is actually a game meant to be taken slowly and carefully, thinking about each step you take. While best known by its NES port, the arcade version of Contra is a superior game with better graphics, fairer gameplay (with a couple of exceptions) and tighter control.

Most levels involve walking from left to right, jumping across platforms and shooting enemies. One level scrolls vertically instead, and two are "3D," with the camera positioned behind the player. These two stages, set inside enemy bases, have a time limit and are cleared by destroying an energy core at the end of each hallway. The final four stages all flow from one to the next, with no transition screens between them. This creates a much more organic feel in the second half of the game, as one area smoothly transforms into the next. While the game begins in the jungle fighting human soldiers, it becomes clear in stage 3 that there's something grosser going on here, and by the end of the game the world has become a video game version of Aliens, starring two player characters who look like Arnold Schwarzenegger and Sylvester Stallone. The transition from jungle warfare to combat with aliens feels reminiscent of Predator. It doesn't get much more 80's Action Extravaganza than this. 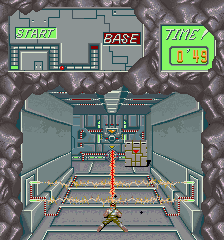 As you proceed through the game's stages you find a variety of weapons; A laser that does high damage but can't be fired rapidly, a rapid fire machine gun, a spread cannon that covers a wide area, and a flame thrower that is weaker than the laser but covers a wider area than a standard shot. If you have no power ups equipped, you will occasionally be able to earn an item that grants you temporary invincibility. With default settings, you gain an extra life once you hit 30,000 points and an additional one every 70,000.

As I said in the introduction, this is mostly a very fair game, though it may feel overwhelming at first. There are a lot of enemies, but there's almost always a safe spot to avoid them and fire without putting yourself in too much danger. The exceptions are the final boss, which just overwhelms you with enemies, and the boss of the second 3D base stage, which fills the screen with fast-moving energy blobs that track the player. The stages are short enough to always feel like you're making progress, and if you do run out of lives you can insert another credit and begin from the exact point you left off, but your high score is lost. You can only continue four times, so don't expect to beat this game just by pumping quarters into it. 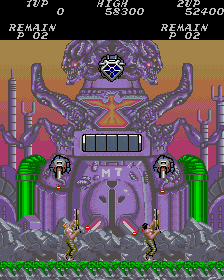 Unlike the NES version, all of the weapons in this game feel useful, though the spread cannon is infinitely more useful than the rest of them for most of the game. Even the standard shot can be fired rapidly enough, so you never feel stranded if you die and lose your power ups (unless you're in the final stage.) Trying to play the game without relying on the spread cannon adds a new layer of challenge but requires much quicker reaction, especially against bosses.

Contra's graphics are great, with lots of color and detail and no slowdown or sprite flickering. It's easy to tell players 1 and 2 apart if you're playing co-op, though having two players shooting everywhere makes some parts harder to see and you have to worry about scrolling your buddy off the screen to their death. The game does a great job capturing the feel of Alien's monsters while being just visually distinct enough to avoid getting Konami sued. The soundtrack is still great and every song is quite memorable.

The NES adaptation is a lot of fun, though definitely not as good as the arcade original, but most people probably don't have easy access to a Contra machine. There's one at Funspot that I make sure to play every time I go up there, but I've never managed to beat the game on this machine. I always come close, usually running out of continues right at the final boss! There's an arcade perfect port on the Nintendo DS arcade compilation Konami Classics Arcade Hits. This is one of the best classic game compilations on the system and allows you to mess with lots of options found on the original arcade board. However, it's slightly hard to see everything on a standard DS, since the arcade game was taller vertically than horizontally, resulting in a slightly squished picture with black bars on the side on the DS. If you have a DS XL or 3DS XL, you'll probably have a much easier time seeing everything than I do on my DS. There's also a port available for $5 on the Xbox marketplace that adds really ugly new explosion graphics and remixed music but is otherwise accurate to the arcade version.

Contra's not a game for everyone and can be absolutely unforgiving if you don't take things very slow and carefully. The arcade version can be completed in 15 minutes or less once you know what you're doing, and is exhilarating from start to finish. If you get a chance to play the original, be sure to do so, but it's probably safer to just recommend picking up the DS Konami collection. It doesn't include the second Contra game, but it does come with 14 other games, most of them pretty good. New copies are pretty rare and used copies tend to go for around $20, but it's definitely a worthwhile collection.
Posted by surlaw at 4:27 PM