Review - The King of Kong: A Fistful of Quarters 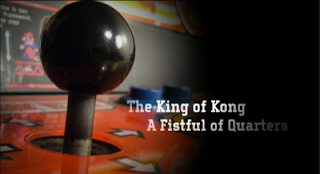 There's something special about seeing a place you know well make an appearance in a movie. A shot of the Boston skyline might not do a whole lot for me, but a shot of a train station I went to regularly throughout college? That makes me smile. It's even better when that place is crucial to the film's setting. Funspot, in Laconia, NH,  is one of my favorite places to stop by on vacation, and my wife and I try to make a trip up there at least once a year. It's the largest classic gaming arcade in the world, and there are a lot of good memories there. When I found out a documentary was filmed there, I knew I had to see it, even if it ended up taking me a few years to actually get around to it. The film is Seth Gordon's King of Kong: A Fistful of Quarters, a chronicle of two men with a serious devotion to Donkey Kong.


Whether through intent or simply the nature of the men being documented, this film has a clear protagonist and antagonist. It opens with Billy Mitchell, a hot sauce tycoon and world renown gamer who holds a number of all time high scores, his biggest claim to fame being his score in the original Donkey Kong. From his attitude and conversation, it's clear from the first scene that this guy, with his play-to-win, take no prisoners attitude is meant to be a villain. He's a classic 80's Guy. We are then introduced to Steve Weibe, a kindly family man who takes to playing Donkey Kong obsessively once he's laid off. This meek newcomer to the world of competitive Donkey Kong is our hero.

I knew that the film was about Weibe's attempt to break Mitchell's high score, but I didn't realize the journey would be so sad. I expected a more jovial, jokey atmosphere, but instead found a story about obsessiveness, adult cliques, and what happens when you lose yourself to competition. I expected to see more about the history of the game itself, but that information is kept brief. Ultimately, this isn't really a movie about video games.

Early on, Weibe video tapes himself breaking Mitchell's score on a Donkey Kong machine he keeps in his garage while his son pleads for his attention. He submits this tape to Twin Galaxies, an organization dedicated to documenting worldwide video game scores. We meet an array of characters: Walter Day, an eccentric old man in a referee suit who has monitored gaming competitions for decades. Brian Kuh, a 30 year old retiree who isn't happy about Weibe breaking Mitchell's record. Robert Mruczek, a member of Twin Galaxies who has watched thousands of hours of recordings of video game high scores. Plenty of others appear in minor roles. They're all a little unhinged in their own ways, though Day is certainly likable. He merely comes off as an old hippie, while Mruczek comes off as fairly detached from reality through his obsession with score watching.

Doubting Weibe's integrity, Kuh leads a trip to Weibe's home, where he harasses his family until he is allowed to enter their garage and disassemble the Donkey Kong machine in order to find any possible irregularities in it that may have allowed Weibe to cheat his way to his high score. In a healthy environment, Weibe would be congratulated for his accomplishment, and the investigation would be explained and carried out with his blessing. Instead, it feels more like a criminal investigation; an outsider has dared to try to enter the established social order.

Weibe ends up going to Funspot to participate in a live tournament to prove his skills and the drama just gets thicker. His wife appears tired from the ordeal and his daughter questions why he's wasting his time fighting with these jerks. Whether these guys actually have fun playing games is never really clear. Sure, competition in itself can be fun, but the level of obsession present just makes the whole experience seem miserable. Weibe is clearly a good guy, but even half way through the whole experience he begins to look worn out. By the end, he's absolutely exhausted. He's pressing himself hard to compete in a field that doesn't respect him in order to defeat rivals that he doesn't personally know (Mitchell avoids him through most of the film).


The topic of obsession could be any form of competition. In another world, Weibe and Mitchell might have been rival poker players, businessmen, golfers. The narrative wouldn't have to change much. It would still be a story of compulsion taking control of people to the point of exhaustion in some and loathing for outsiders in others. The film at times feels like a condemnation of gamer culture, but I absolutely feel that this film could be made about a vastly different subject and still turn out the same if its participants where as obsessed as Weibe, Mitchell, and his disciples. Any insular community will produce this level of vitriol if it feeds on itself for long enough. The biggest difference is that if the topic were different, the participants would probably have slightly less horrible hair and mustaches. The film's soundtrack is comprised of 80's music, but it's not just randomly selected hits; Animotion's Obsession is chosen for obvious reasons, while Leonard Cohen's apocalyptic Everybody Knows haunts a later scene in the film.

King of Kong is compelling, but I disagree with reviews that call it hilarious. There are a couple of pretty funny bits, but for the most part, it's a sad story of obsession and isolation both of individuals and of a community. It's a study of modern American self destruction; it just happens to have Donkey Kong as its backdrop. I can't wait for our next trip to Funspot, but next time, I can't imagine myself caring about high scores in quite the way I did before. Everything in moderation.
Posted by surlaw at 8:55 PM