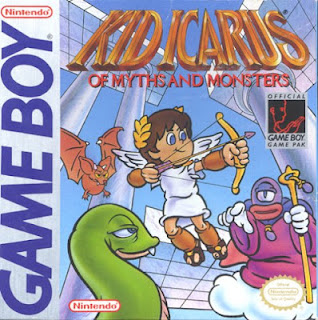 Published in the golden age of platformers, 1986's Kid Icarus remains one of my all time favorite Nintendo-made games. It's hard but fair with greatly rewarding gameplay and really nice art design. A sequel was published on the Game Boy in 1991 (strangely, it was never released in Japan on its native system) but in spite of my love for the original, I never picked it up until it was re-released on the 3DS e-store a couple of weeks ago. It's a solid title, but it chooses to rehash the original rather than be its own beautifully bizarre spin-off like Super Mario Land.

Like its NES predecessor, Kid Icarus: Of Myths and Monsters is divided into three main worlds, each consisting of three standard platforming stages and one maze-like dungeon. The first and third worlds scroll vertically, while the second scrolls horizontally. After completing these, the hero, Pit, suits up for battle with an array of powerups and fights through one last stage. The structure of both games is nearly identical, even if the level layouts are totally unique. Players collect the same power-ups, endure the same "dodge plates thrown by Zeus" training exercise, and purchase the same items. The only difference is the final stage, which in the NES original was a Gradius-type shooter. In Myths and Monsters, the final stage plays like a traditional Kid Icarus stage, only with an unlimited ability to fly.

Myths and Monsters isn't a mindlessly easy game, but it certainly feels like a cakewalk compared to the original. Falling no longer kills you; you're free to go up and down, back and forth through stages as you please, and you can mash the jump button to slow your fall. Money (hearts) is much easier to collect, as weaker enemies drop much more than they did in the NES game. Recovery items are much more common and can even be found randomly after defeating enemies now. It's much easier to level up your health and arrow strength, and enemies such as the Grim Reapers, who were nightmares in the original game, are fairly easy to beat now, due in part to their slower speed. The mazes are smaller and harder to get lost in, with the exception of stage 3-4. You can still get cursed and turned into an eggplant, but this actually has a benefit to it at times; your smaller size allows you to slip through tight passageways. There are still stages where you can randomly open jars praying that a Baby Reaper doesn't come out, but if it does, you still get to keep the items from the pots you already opened. In the original, if you get a Reaper, all of that room's treasures are lost. 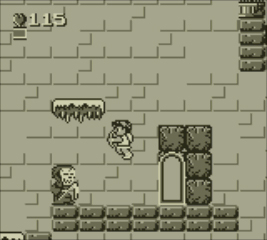 Weirdly, in spite of the overall game being notably easier, I feel that this game's bosses are tougher than the original's. They tend to take more hits to defeat, and the final boss actually requires you to move around, while the first game's could be totally broken by just standing still and shooting at a safe distance. The art design of the bosses is definitely not as memorable in this game as it was in the original, but they're not bad.

Visually, the game looks good, but Nintendo chose to use a closer camera in order to keep sprite sizes about the same as they were on the NES. This means that you won't be able to see all of the doors in a room without walking back and forth to look around. This isn't a huge problem, but it does make the game feel a little less smooth than the original. Art design isn't quite up to the standards of the original game, even if it does still have the lovable Eggplant Wizards and clay pots stuffed full of an endless supply of snakes. One of Kid Icarus's strangest enemies is a set of eyes with a big nose and a mustache (or maybe nostril flippers, who knows) that haunts dark, abandoned rooms. In Myths and Monsters, these guys are replaced by generic bat enemies. The best new enemy in the game is a giant, disembodied foot that falls out of the sky. 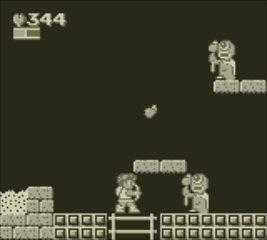 The music here is nice, though not as memorable as it was in the first game. The Reaper's Theme is a lot more mellow, so if you get rushed by one you're not going to get the same sense of panic that you would in the original. Nothing stands out as bad, but nothing is particularly thrilling.

Myths and Monsters is a curious experiment in taking the Kid Icarus formula and making it more palatable for a wider audience. The game is much more forgiving, easier to learn, and, thankfully, contains a save system in place of the original's horrible passwords. It's a better entry point to the series than the first game is, but to old pros of the original, Myths and Monsters will feel a bit rehashed and a bit too easy. If you've got a 3DS and haven't played these games before, I'd actually recommend playing this one first before downloading the original. You'll adjust to its learning curve a lot quicker, and might be more prepared for some of the more brutal aspects of the original game.

One last note: The ending is a pretty funny moment that references the ancient Icarus myth, one of the few such moments in these games. Mythology would be even more fun if it really WAS full of Eggplant Wizards.
Posted by surlaw at 11:35 PM