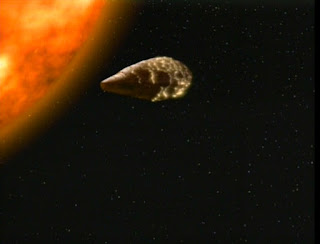 "The Enterprise races against Romulans to make first contact with a powerful entity code-named "Tin Man.""


A telepath with a grating personality comes aboard the Enterprise to help the Federation make contact with a sentient pine cone before a star explodes. The titular Tin Man really does look more like a wooden blob. Tam Elbrun is a dude with personality issues that arose from hearing too many voices at once. He's in search of his own Fortress of Solitude. This is a character trait that should be sympathetic, but really, this guy's intolerable. He's rude and obnoxious to organic crewmen and creepy and smug around Data.

There's some drama with Romulans trying to get to the Tin Man/Gomtuu first, but I couldn't really find anything that kept me interested. There's also a very cheesy Mystical Music theme that plays whenever anything magical happens. I've seen this episode a lot of times, and it's not one of my favorites. It's not aggressively bad, but it's certainly not good. It's just kind of there.

From Memory Alpha: "The ambient sounds that Gomtuu made were derived from sounds recorded from sound effects editor Jim Wolvington's stomach through a stethoscope while he was eating pizza." That's the most interesting thing about this episode. 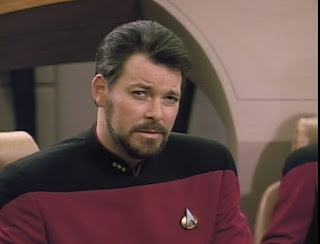