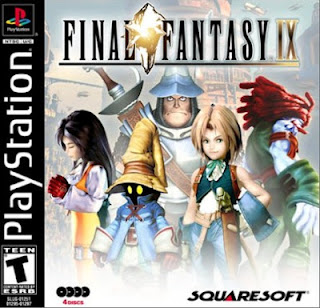 Final Fantasy IX, released in 2000 towards the end of the original Playstation's lifespan, was billed as a return to form. After the high-technology, sci-fi atmosphere of Final Fantasy VII and VIII, IX was meant to be a throwback to the more whimsical styles of the series' earlier installments. I always found this kind of a silly selling point, especially since Final Fantasy IV features space travel and the world of VI is pretty industrialized. Part of what appeals to me with the Final Fantasy series is the way in which almost every game has a fresh style and tone. IX doesn't feel like a rehash at all, but it doesn't feel exactly fresh.

The story begins with Zidane, a half-man, half-monkey with a spooky secret, kidnapping Garnet, the princess of a kingdom on the brink of world war led by her greedy mother. Turns out she can't really be kidnapped, since she was looking for a way to escape as it is. They are joined by Steiner, a knight who serves as Garnet's sworn bodyguard, and Vivi, a young mage with a mysterious past. All four of these characters are likable, memorable, and have good plot arcs (at least in the first few acts of the game.) Along the way they meet a whole lot of other playable characters that range from temporarily interesting to forgettable.

At first, the story is simply a tale of nations at war with a romantic undercurrent, told in a very self-aware, theatrical manner. It eventually expands into a mess of surreal nonsense that isn't bizarre enough to be interesting but just weird enough to not mesh with the tone of the rest of the game. Queen Brahne and her ambitions of power make for a fun adventure story, and once the game shifts away from that and into existential questions of the soul, clones, and destiny (in which our perky lead character becomes a boring, mopey mess) you have such a sudden and ill-conceived break in tone that it feels as if the entire final quarter of the game were written by a separate writing staff.

The character of Vivi is, from the beginning of the game, trying to figure out what he is. You learn early on that the Black Mages are actually artificial constructs, and he spends the rest of the game trying to reconcile his purpose in life. His plot is well designed, poignant, and resolves itself nicely. For some reason, Square decided to try telling this exact story again with a different character in the last quarter of the game, and this time they ended up telling it in a ham-handed, abrupt way that really doesn't belong.


This isn't the only major stumble in the game's writing. Your party is joined by Freya, a knight with a lance (who happens to be a giant rat person) who fights by your side as you struggle to save her home land from Queen Brahne and the flamboyantly dressed glam rocker Kuja, who is obviously the main threat from the first time you meet him. Freya is well written and serves her purpose in the plot well while you're involved in the events of Burmecia, her home. Unfortunately, her plot resolves itself less than half way through the game, and she sticks around with you and does absolutely nothing of value for the remainder of her time.


I liked Freya, but there was no reason to keep her around as a playable character after her story is over. Still, that's better than what I can say of some of the other supporting heroes. You have Amarant, the quiet badass whose nonchalant ways are probably super cool to adolescent boys and kind of embarrassing to everyone else. You have Quina, a blob monster with a terrible frog eating mini game who is entertaining but serves absolutely no purpose in the story. Your final hero is Eiko, a very young girl in a very awkward set of overalls who has a crush on Zidane. She and Amarant should have been cut from the game entirely, at least as playable characters. I guess you could keep Quina, but either revamp or ditch the frog minigame.


The other minigames you'll encounter are a card game, which you're forced to play at one point in the plot but don't have to win, and a treasure hunting minigame. The card game feels random and nonsensical to me, and I was never able to enjoy it. Final Fantasy VIII also had a card game, but (until the end game, when rules got randomized) it was actually fun, since its initial rules were much more straightforward. The treasure hunt minigame involves digging in a special forest by using a Chocobo, the series' trademark giant yellow chickens. You dig up slabs that give you hints to finding secret locations on the world map to dig up further. I personally found this extremely boring, but I know it has its fans.

I do think this game has one of the best art styles in the series. I like how the characters and cities look, and the dungeons are pretty nice too. I like having weird animal people everywhere, but with no attempt to make them look "cool." You've got hippo people, but they're just hippos in overalls and funny hats. They're not intended to be edgy or badass or, thank god, sexy. The world map looks incredibly boring and featureless, but that's my only beef with the game's visuals. It looks extremely good for a PS1 title, and it's hard to believe when comparing character models that it was on the same system as Final Fantasy VII. Its music is also top notch, though I personally preferred VII's, as far as the PS1 titles go.

I've touched on IX's great art style and sometimes good, sometimes uneven writing, but what really brings the game down is its battle system. The random battle rate is high, and each battle takes a long time to load. At the start of every fight, the camera spins wildly through empty landscapes while the character models are loading. Spell animations are overly long, like every PS1 Final Fantasy. Attacks queue up in a really strange way, and sometimes you'll select an attack and not see it performed for a good 30 seconds. The battles in this game are very, very slow, more so than any other game in the series.

Each character has a distinct, useful role in battle, which is a set up from VII and VIII. Steiner and Vivi even have combo skills that allow them to team up for large scale attacks. Each character has a limit break, similar to VII, that activates once you've taken enough damage. Unfortunately, you can't choose when to activate these abilities, so you'll end up wasting most of them in random battles against non-threatening enemies. Skills and spells are learned through equipment; you select a weapon and it has a series of skills associated with it that eventually unlock as you gain experience. The problem with this is it takes a long time to unlock everything, meaning you waste a lot of time wearing sub-par equipment in order to make your characters useful.


Its battle system gets a lot of praise from fans, but I find IX's fights so slow and their load times so excruciating that it's hard to hold it up to the other games in the series. There's also an annoying spike of difficulty at the last dungeon that required me to grind for levels, while everything up to that point was simple. This costs the game a lot of points in my eyes; I may love its art style and really enjoy the first half of its story, but it's hard for me to get into a 40 hour RPG with a battle system this clunky. The length of the game is a problem for me too. If this game had been closer to 20 hours long, as Final Fantasy IV through VI were, it wouldn't have had nearly as many pacing problems, and maybe it would have ended before getting really stupid. Final Fantasy VIII also features a terrible late-game twist, but it's easier to ignore than IX's.

The other big twist in this game is its final villain, who comes out of nowhere, and is the fourth major threat in the story. Only Queen Brahne, the very first threat, is a fun character. Kuja starts out amusing but becomes a mopey villain intent on destroying everything for no real reason, and the third major villain to appear, Garland (named for Final Fantasy I's villain) barely registers as a character. He does quote Star Wars Episode I at the audience, but I wish he'd quoted Jar Jar instead of the Star Wars prequel's terribly written Yoda speech.

Overall, in spite of quality art design and decent dialogue, Final Fantasy IX staggers too often, and it pales in comparison to Suikoden II, released around the same time to much less fanfare. While I prefer IX's characters and setting, I'd rather play Final Fantasy VII, even if that game too has plenty of notable flaws and much worse writing. IX is not a bad game by any means, but it requires a great deal of patience. If you can, I recommend playing it on a handheld (A digital version was released on the Playstation Network in 2010 for $10) instead of a TV, so that you can at least do something else during the boring parts and while the battles are loading.
Posted by surlaw at 9:18 AM