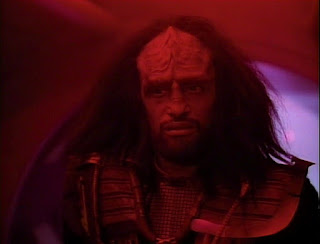 "Worf is plunged head-first into the politics of the Klingon Empire when his deceased father is accused of treason."

Worf's long lost brother is introduced, his father is blamed for the massacre at the Khitomer Outpost years ago, and the drama with the Duras family begins. This is one of the most important episodes in the series, as Worf and his family's honor is one of the few long term running plot arcs in the series. This is far from the first Klingon centric episode, but it's the first great one.

Tony Todd is great as Worf's brother, Kurn. He later goes on to play Old Jake in DS9's The Visitor and a Hirogen in Voyager. This guy's got a spectacular voice, and he always brings a lot of weight to his roles. Michael Dorn really gets some good content to work with here, as Worf finally begins to become something more than angry and stupid. After this episode, it's hard to look at him as "The security guard dumb enough to pull a phaser out at a bad guy on a view screen." The character doesn't reach his peak until DS9, but this is a good look at things to come.

Picard once again represents a crew member in a sort of trial, after fighting for Data in Measure of a Man (and The Offspring) and Riker in A Matter of Perspective. I guess the writers quickly learned how good Patrick Stewart is at playing a strong legal advocate, because they keep putting him in these positions and he's fantastic every time.

This is another episode written by Ronald Moore, his fourth in the series. His episodes really show the turning point of the series, when it goes from goofy fun to a legitimately good show. I've got no complaints with this episode, aside from the fact that they use the term "Klingon Imperial Empire." Thankfully, this phrase is never used again. 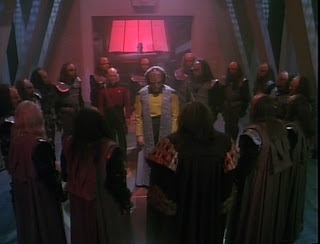