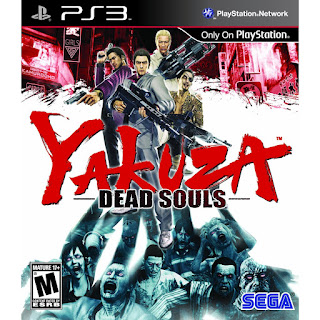 Dead Souls is the latest spinoff of Sega's Yakuza series. Instead of fighting gangsters with your fists, you spend this game shooting at zombies. The series' sense of humor and its melodrama are still intact, but the core gameplay is quite different. And yet, in spite of a totally new combat system, this game feels like a rehash.

This adventure takes place entirely within the district of Kamurocho, but unlike Yakuza 4, you don't spend any time in the city's rooftop area and only a couple short sequences take you into the sewers. The city, the minigames, and the business locations are all unchanged. You can still go into the same restaurants and no one in them acts any differently, in spite of there being zombies rampaging outside. You're asked to save each business from the zombie threat, but after that, the events happening outside become irrelevant to each store/restaurant.

The action is again split into four chapters, the first once again starring Yakuza 4's introductory hero, Shun Akiyama. He uses small, quick guns, and is there to teach you the basics of the game. The events of his chapter have almost no bearing on anything else in the game's story.

The second hero is Majima, a lunatic with an eyepatch who has been a series mainstay but has never been playable before this game. He fights using a shotgun. While Yakuza 4 gave Majima an interesting history, Dead Souls focuses entirely on his madman personality. He's a great supporting character, but it gets kind of old as a lead. He does, however, have by far the best karaoke scenes in the game.

Third we have Ryuji Goda, a main villain from Yakuza 2 who was thought dead but instead chose to spend the last few years training as a chef. He's reformed and now has a heart of gold along with a giant Gatling gun for an arm which he never needed to use before the zombie outbreak. He has a connection to one of the main villains.

The final chapter stars series hero Kazuma Kiryu, whose adopted daughter has been kidnapped once again, bringing him back to Kamurocho to bust some heads. He at first refuses to kill the zombies, and fights using his fists until it proves futile and he instead picks up an anti-tank rifle. The hand to hand combat scenes feel far sloppier than they did in the previous games.

I was hoping there would be a big finale where everyone comes together to save the day, but in the end, the majority of characters introduced are irrelevant to the story and you just end up controlling Kiryu against a couple of fun final bosses. It doesn't come close to matching the excitement of the final showdown in Yakuza 4.

The main story is largely a generic zombie outbreak adventure. With each new chapter, the infected, walled-off sections of Kamurocho continue to grow, giving each progressive character a larger area to fight through. There's no real compelling villain in this story, and the big culprit behind it all doesn't get revealed until almost the very end, and even then, isn't interesting at all, aside from the fact that the character really looks like a grandma but is referred to as "he."

There are still a lot of good, funny side stories, though unfortunately, they're almost entirely contained in the first two chapters. The side stories in Kiryu's chapter are especially uninteresting, and four of his fifteen side stories involve escorting the same groups of unarmed civilians out of harm's way, passing through the same areas each time. 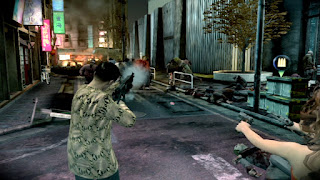 Combat is passable. It's nothing innovative but it's certainly not awful. You move around with the left stick and can fire freely using R1. Your character automatically locks on to nearby enemies this way, or you can press L2 to go into an aiming stance to pinpoint weak spots. Annoyingly, the camera for aiming also uses the left stick, even though the rest of the game's camera is controlled with the right stick. It creates a weird disconnect between moving around normally and aiming, and there's no way to change it in the game's options. You get used to it, but it's off putting at first.

The bosses aren't too visually exciting, but their fights are usually fun. There's one terrible, terrible boss fight with a flying enemy that's among the worst I've seen in any game, but the rest range from decent to good. This one boss deserves attention for how bad it is, though. You encounter it about 3/4s of the way through Kiryu's chapter, and it hits on almost every point for bad boss design: A flying enemy in a game where the camera can't look all the way up, shadows that disappear, causing you to lose track of him, minor enemies that constantly harass you during the fight (knocking your aim out of place), AI partners that do nothing and need to be rescued constantly, and regenerating health for the boss. It's just really poorly designed and completely unfun and looks even worse when compared to how well the rest of the bosses work.

Aside from that one moment, if you're playing on Normal, the game is probably the easiest shooter I've played. Your weak guns have infinite ammo and ammo for your stronger ones is way more plentiful than you'll ever need. Healing items appear in the same locations every time, and you will never run out. The only difficulty is keeping AI partners alive, since their AI is terrible. There are times where enemies can gang up and stun you in a corner dealing damage over and over again, but since it's so easy to heal, this is just a (major) annoyance and not much of an actual threat.

In addition to normal zombies, there are also a few special classes of zombies that are more challenging to fight. A couple of them are lifted directly from Left 4 Dead. These guys break up the monotony of fighting simple zombies, but it would be nice if there were more types. They're a lot more fun to fight than normal enemies, even if they're probably even worse about pinning the player down and leaving you unable to move for way too long at a time.

Speaking of things lifted from other games: Right after that awful flying boss I already complained about, you end up fighting a battle almost identical to the Ndesu boss fight in Resident Evil 5. You fight from a mounted gun on an armored vehicle while he winds up to punch, throws rocks, and gets support from zombies throwing Molotov cocktails. I don't know when or why zombies with Molotovs became a thing in games, but I'm mighty tired of it already. These two bosses are practically identical, only Dead Souls' version is uglier, easier, and over with quicker. It's the worst part of RE5, but only a minor threat here. This isn't the only moment lifted directly from RE5, but I won't spoil the rest.

The overall game is about half the length of the previous two. It took me 25 hours to finish the main story and every side story. This isn't a complaint, either. While Yakuza 3 and 4 could carry their weight for 50 hours, Dead Souls really can't. By the time you're near the end of the game, you've run down the same corridors fighting the same enemy layouts so many times that it gets exhausting. Sega was wise to not make this game longer than it is. If you want to extend your play time, you can fight through an infinitely long randomly generated dungeon, but I can't imagine why you'd want to.

Repetition is ultimately what hurts this game. Whenever you go into the infected zone, you'll be doing it from the same infiltration point per chapter, meaning you're going to be running the exact same path every time you do anything. You're going to spend a lot of time escorting survivors down the same routes over and over again and fighting the same minibosses. The different weapons at your disposal don't mix things up enough to make this not become tedious.

Another complaint I have about the infected zones is that there are no save points in them. I'm not a fan of being forced to play for an hour before I can save, and it's not even a question of using limited saves to up the tension, since there's almost no consequence for dying. Saving is much more limited than in Yakuza 3 or 4, and this is frustrating. I'm personally for all games allowing you to save at every checkpoint.

I'm coming down on this game pretty hard, but I did enjoy it for the most part. It's just that in comparison to Yakuza 3 and 4, it really feels like an inferior product. There's so little new content to the city and so few new graphics that this almost feels like it could have been sold as a DLC expansion for Yakuza 4. Between the special zombies, the bosses, and a few NPCs, I feel like there were barely more than a dozen new character models in this game.

The funny parts of the story/side stories are funnier than ever, and the game is very self aware of how dumb its premise is. It plays this up heavily in the first two chapters, and sadly less so in the final two. It's great seeing the old crew again, and the dialogue is as entertaining as ever. The gameplay is just so much weaker than a normal Yakuza title and there's a lot less variety to it.

If you're a big fan of the characters from previous games, you'll have fun here. If you're new to the series, it's going to seem pretty incoherent. This game feels like a love letter to fans, especially in the end credits in which you're shown a montage of Yakuza adventures from the very first game to Yakuza 4. It feels like a sendoff for the current model of the series before moving on to whatever the new engine in Yakuza 5 is going to be like, it's just a shame that the gameplay is mediocre at best.
Posted by surlaw at 1:20 AM