When I said I was going to review the arcade game Turtles, this is probably not the one people expected. The Teenage Mutant Ninja Turtles are not the subject of this review, although their arcade games are pretty great. Instead, we'll be looking at Konami's 1981 maze game that most people probably haven't played. To be blunt; you're not missing much.

The goal of the game is to run around a maze avoiding beetles while touching blocks with question marks on them. After you hit a block, either a baby turtle will emerge for you to whisk away to safety or a ravenous beetle will pop out and likely kill you almost immediately. Your only defense against the beetles is a limited supply of bombs you can drop as you run. The enemies are faster than you, much more relentless than, say, a Pac-Man ghost, and due to the lack of safe paths and numerous dead ends in the game's mazes, Turtles is harder than the average maze/collection game. 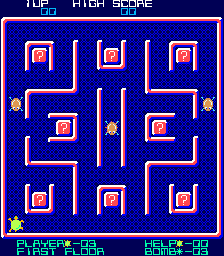 The random aspect of the game is really what ruins it. With Pac-Man, you know exactly where you need to go to complete a stage and the challenge is getting there safely. In Turtles, it's random luck whether the block you open helps you complete the stage or just makes it more difficult. There's probably a pattern to it, but I've never had the patience to find one. Imagine playing a game of Pac-Man where every time you ate a power pellet it had a random chance of killing you.

Turtles has cute graphics and pleasant music. These are really the high points of the game. There's something charming about a game whose objective is to save baby turtles, but sadly, it's just not fun. I still play this one when I visit Funspot on the off chance that I somehow reach a terrapin-induced enlightenment and it suddenly all makes sense, but it hasn't happened yet. Stick to Pac-Man if you've got the choice.
Posted by surlaw at 4:22 PM