I think I've got a fondness for bizarre, nontraditional video game sequels. Mario 2 is my favorite Mario game, Zelda 2 is my favorite Zelda, I can enjoy Castlevania 2 in spite of it probably actually being a bad game, and I really love Dig Dug II.


Dig Dug II is an amazing follow-up in spite of being very different from its predecessor. Instead of rehashing a formula in a way too many arcade games tend to do, Dig Dug II (Released in 1985, three years after the original) goes for something completely fresh while keeping the familiar characters we know and love. In the original game, you dig through dirt and use a pump to inflate already balloonish dragons and rock monsters until they pop. In this game, the camera takes on a different perspective and you're now adventuring above ground. 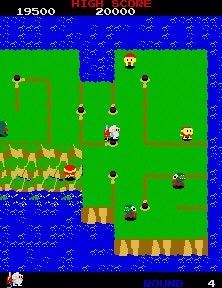 You still have the faithful, disturbing air pump at your disposal, but the main weapon this time is a jackhammer which can drill through weak points in the land, causing them to break off and fall into the ocean. The more monsters on a fragment when you sink it, the bigger the bonus points. The round ends when all enemies are popped or sunk.

The strength of this game is entirely in its level design. Later maps become quite difficult and require a good deal of planning to survive, and it becomes easy to trap yourself in really bad situations! The challenge comes from the levels themselves, not just from the normal arcade method of enemies becoming way faster than you. This game requires more forethought than the original, which relied more on twitch reactions. Both have a place in games, and both of these games are great, but I'm really pleased that Namco took a risk with this sequel. It didn't really take, as future Dig Dug games went back to the formula of the original, but Dig Dug II is still around in several Namco Collection compilations, ready for a new generation to get pumped up.
Posted by surlaw at 2:13 PM