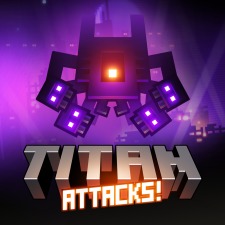 Indie developer Puppy Games' PC/PS3/4/Vita title Titan Attacks! sounds like a game tailored directly to my tastes: I love old score attack arcade games, Space Invaders, and hyper retro revivals, from true sequels like Pac-Man CE to spiritual sequels like Resogun. Titan Attacks! takes the basic Space Invaders formula of shooting down perpetually descending waves of monsters, gives it flashy visuals, and updates it with pop gaming trends like stat building. It runs well and its core game mechanics are fine on the surface, but once I spent more than a few minutes with it, I quickly grew bored. Titan Attacks! is almost a perfect storm of "what not to do in an arcade game."

Space Invaders has been an iconic arcade mainstay since its initial release in 1978. It's incredibly simple and straightforward, with clear scoring, a difficulty level that ramps up quickly, and memorable art design. Its presence in pop culture and in game design philosophy makes it one of the most important games of all time, and it's been oft imitated. I've got no issues with someone essentially remaking Space Invaders in their own image; the original version's one of my favorites, but I'm always happy to see a new take on it.

I wish it were otherwise, but Titan Attacks! is an awful Space Invader type shooter. The graphics are flashy but unclear, with mostly boring enemy design (the best ones just look like modified Invaders) and bullets that blend in with the background far too closely in some stages. Sound design is incredibly weak, with loud, annoying cannon fire once you upgrade your tank, dull music, and no decent sound indicator when you take a hit from an enemy. I wouldn't know I was even taking damage if not for the big "multiplier lost" messages. Worst of all, you can take a ton of damage here with minimal consequence. There's almost no danger.

It's fine to try to create an easier, more casual Space Invaders, but Titan Attacks! bungles its difficulty in an absolutely sloppy way. Between each enemy wave (there are 100 total, which then repeat with slightly faster enemies) you get to visit a shop where you can upgrade your shields, weapons, rate of fire, and more. This is a fine idea, but there's so little balance it's ludicrous. You can load up, cheaply, on eight shields add-ons and refresh them between stages, meaning you can take nine hits per wave before dying. Maybe the shop shouldn't be available after every single wave? Maybe the shield limit should be massively lower? Two or three hits tops would be plenty. Compared to any other Space Invaders shooter, you're practically a god compared to the enemies here.

This carries over to weapons, too. Once you upgrade your guns, you'll be firing a dozen shots per second, annihilating entire enemy waves before the WAVE # text even clears. If you're in a sticky situation, you can drop a Smart Bomb and clear the screen with no penalty. Bosses are the only threat, but only because they're total bullet sponges, even once you've upgraded your fire power. A lone survivor fighting off an alien invasion should feel like an underdog, not a superman stomping on ants.

The goal of the game is to make it through a complete wave without getting hit, which raises your points multiplier. It can increase up to 9x. This should make for competitive score attacks, but this is yet another place the game falls on its face. A good score attack game is quick and painless, and will only last an hour per life for the best players. With Titan Attacks!, it took me a couple of hours spread across two days before I was finally killed by a boss on the 340th stage. Since stages loop infinitely, so if you're good enough to survive (or just save and quit when you're in danger, which restores your shields/bombs) you can keep playing indefinitely. I made it this far on my very first time playing. The leaderboards are already filled with people who have maxed out the score counter (which wouldn't take more than four loops through the game's 100 stages, since beating it doubles your score) after two days. I've got zero interest in trying to beat my score if doing so means hours of grinding through the game again.

If you care about trophies, you'll 100% this game your second time through. The biggest challenge is catching falling aliens that you shoot our of their ships, which gives you bonus dollars, and it's only a challenge because it's easy to kill them all on accident since you're so overpowered. There's no creative challenges, it's all "clear X stage" or "do thing X times." How about "Clear a stage without missing?" "Clear a boss without taking damage?" "Clear a planet without buying any upgrades?" Score attack games are a great place for trophies, since they add extra objectives to otherwise simple games. Here, they're just lazy. Also, my game glitched and for some reason I was earning trophies from Injustice: Gods Among Us while I played it. I've got it downloaded on my PS4, but I haven't actually played Injustice yet. I've already got a bunch of its trophies now, though!

Titan Attacks! is a free download for PS+ members through December, but it's not really worth your time in a world where Resogun and Space Invaders Infinity Gene exist. Go with one of those instead.
Posted by surlaw at 11:03 PM