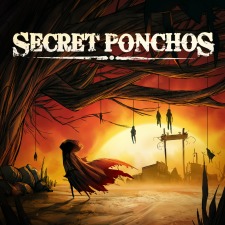 Over the last few years, Sony's done a really good job promoting offbeat indie games for their consoles. From Octodad: Dadliest Catch to Guacamelee, they've helped spotlight fresh content from small developers, some good, some bad. One of the latest examples is Secret Ponchos, the debut title from developer Switchblade Monkeys, one of the free PS+ games for December. It's also currently available in Steam's Early Access program. A competitive twin stick shooter with a cartoony old west  aesthetic, Secret Ponchos brings a lot of style, but sadly little substance.

Players choose one of five character classes, each with its own weapon layout and special abilities. You move with the left stick, aim with the right, and fire your guns/special weapons with the shoulder buttons. There's a decent amount of variety between the classes; the Matador is the best choice for close range combat, Kid Red has deadly explosive traps, Deserter is a bulky wall, Killer is a balanced gun fighter, and Phantom Poncho is a skeleton with a shotgun and whip, the obvious best character type. A big part of the game is rolling to dodge enemy fire, going into cover to hide/restore stamina, and picking up power ups that pop up on the map to get a temporary advantage.

Conceptually, the game's decent, and when you get going, it's not too bad. The problem is that it really, truly feels like a beta, and not a game that should be sold at $15 (in addition to the exorbitant $3 a piece for each new costume per character.) There are only five characters, only five maps, and power ups spawn in the same spots every single time. There's no single player campaign, the menus are confusing (to run Practice mode, you need to start a Local game and switch to Practice from there, complete with a "search for matches" prompt for no good reason), there's no training mode to teach you how to play, and online matchmaking is terribly designed.

You can play one on one matches locally via split screen, but Secret Ponchos is otherwise an entirely online experience. There's an eight player deathmatch, a two on two team mode, and a one on one duel mode. Deathmatch is the only mode that ever connected to other players after a few attempts throughout the day. Every time, it took me quite a while to find a room and even more time for it to fill up. That wouldn't be a problem if the game let me continue playing multiple rounds with the same crew, but after every single match you're kicked back to the main menu, in spite of the ROUND 1 text that appears at the beginning.

I like the art style of the characters, I like the twangy music, and I think the core game is decent enough, if not anything spectacular. It just shouldn't have been released in the state it's in. More characters, more maps, and a more robust online system are a necessity if this game's going to have any longevity, and they can't be priced prohibitively when you're already paying for the game. This one honestly would have worked better as a free to play game (actually free, not just free for PS+ members for December) with buyable skins/taunts/announcers/other dumb fluff to support it. There's something good here, but it's stuck inside of a muddled, buggy package. Wait a few months and see if anything's improved, and if there's still anyone playing.