The latest DLC expansion for Metal Gear Rising: Revengeance is a side story explaining what robo dog sidekick Blade Wolf went through before the events of the main game. Like the Jetsteam Sam DLC, it attempts to add depth to a few of the existing characters of the Revengeance universe, this time focusing on Blade Wolf and PMC Desperado Enforcement's Mistral. This story also introduces Khamsin, a previously unseen member of Desperado. Like the Jetstream Sam DLC, there are a few collectables to find, some VR Missions to play (which must be accessed form within the DLC's story mode), and a lot of recycled content. Blade Wolf does at least play very differently from either Raiden or Sam. 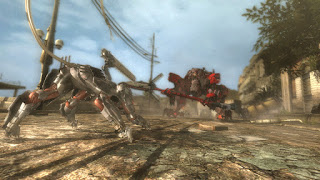 While Sam's focused on aggression and taunting, Wolf's missions often rely on using stealth, which only played a minor role in the main game. There's only one boss here, but unlike Sam's boss fights this one's entirely new and I definitely enjoyed it. This fight is the first time in the game where you can actually use stealth attacks against a boss, and it's pretty satisfying once you pull them off. Wolf's combat is much slower than Raiden or Sam's which is a little disappointing, but at least it means you're less likely to get mashed into a corner while the camera spins out of control.

The story here is all about freedom. Wolf questions both his orders and his purpose for living while Khamsin rants about bringing "freedom" to the people Abkhazia. He tells Wolf, "Remember this, we're bringin' freedom here if it kills us. Or better yet: them." We sadly spend almost no time getting to know Khamsin, but his fight loving nonsense philosophy is obvious War on Terror satire much like Armstrong's in the main game. It would have been fun/horrifying to see the two of them together talking politics. He may be an interesting lunatic, but this DLC doesn't give us enough time to really find out. It does, however, give us a lot more insight into Mistral's personality, even if it spends a little too much time focusing on her making mini robots grab her butt. 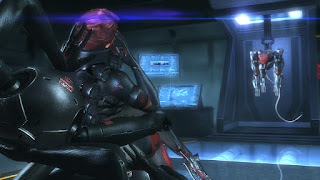 I enjoyed this DLC, but there are still a couple of problems. It took me an hour to finish, including cutscenes, on Hard difficulty and wasn't very challenging on this level. Comparatively, Sam's DLC took about an hour and a half and was far more of a challenge even on Normal. I have yet to try the optional VR Missions included; since half of the story mode here is spent doing VR Missions already, I felt no particular urge to check those out. Like Sam's content, most of the material here is recycled. No new enemies until the boss, no new environments, no weapon upgrades. There's still plenty of replay value if you want to try to S-rank all of the fights here.

My single biggest problem is a couple of mandatory platforming sequences. Wolf's control is not nearly as fluid as Raiden or Sam's, yet he's the one who ends up having to trudge through poor platforming in his main missions. They're not fun, the controls don't feel suited for them, and even though there isn't an absolute ton of platforming, there's still enough for it to get old fast. While most of the gameplay here is fine, these little segments are just obnoxious.

The Blade Wolf DLC isn't bad by any means, but it's still $7 for an hour of content that I don't feel any rush to replay. While I was a little let down by Sam's DLC too, Wolf's really left me saying, "that's it?" in a major way. It feels truncated and I was really hoping for more, especially since the new boss seemed like a really good sign. Things end abruptly, where I was hoping to at least get to play through additional segments later in the story that show what Wolf was doing while he was separate from Raiden in the main game. The platforming's awful and the combat's a step down, but I still had fun playing through this one. It's hard to say whether it's worth its price tag when you can buy entire games cheaper, but if you're really craving more Revengeance it's an option.
Posted by surlaw at 1:00 AM