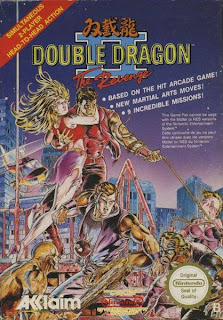 
Like the original game, Billy and Jimmy Lee proceed through a series of stages (nine this time, compared to the original game's four, though the game itself isn't a whole lot longer) where they punch and kick thugs, steal their weapons, quickly lose them once the enemies are defeated, and then punch the next wave. Unlike the first game, you have Front and Back attack buttons instead of Punch and Kick ones. When you're facing left, B kicks and A punches. When facing right, this is reversed. It took me a while to get used to this, but once you do, it's not too bad, even if it is kind of weird. 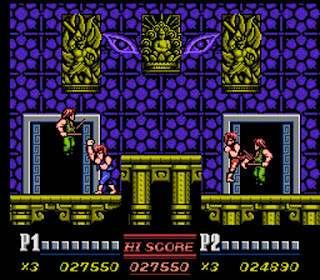 In the first game, Billy's girlfriend Marian was kidnapped for no real reason. This time, she's murdered, for an incoherent reason that's rambled off at you by the final boss. Needless to say, Billy and Jimmy are out for THE REVENGE. Double Dragon II: The Revenge attempts to introduce more of a story to the game. An introductory text screen tells us about punks overrunning the world after a nuclear war sent everything to hell, but the world looks pretty healthy to me and the forest you venture through looks livelier than the one in the first game. Aside from the amount of people wearing leather in public, there's nothing post-apocalyptic here. Between each stage, you get a brief, silly cutscene. They're all pretty dumb and all pretty great. 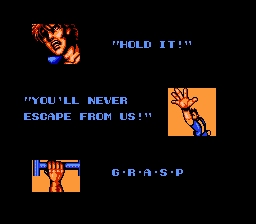 Thankfully, unlike the original NES Double Dragon, The Revenge allows two-player cooperative play. This makes the whole thing a lot more fun than the original game, and I'm glad that my first time through it was with a buddy. Enemy count is higher, the whole game is faster, and the stages are a lot more fun, in addition to looking nicer. Even the box art's better this time around. Both this game and the original have great music, but I think I have to give Double Dragon II the edge here, even if only by a really tiny margin. Enemies look better, the world's more colorful, and Abobo's back and for some reason decided to grow out his hair, giving him a bit of a Danny Trejo look. 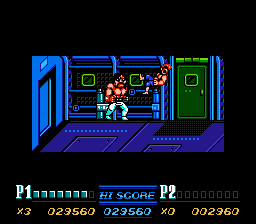 The level up system from the first NES game is gone, but it's not a huge deal. It's always kind of frustrating to learn abilities in one game and lose them all in the sequel, so it kind of makes sense to ditch it, though having some other kind of upgrade system added to compensate would have been nice. Enemies get stronger as you progress through the game, even when it's the same type of enemy, but you're always the same, allowing you to feel like a kung fu champion in the first couple of stages and a kung fu chump by the end. The boss fights are definitely more exciting than the first game's.

The original Double Dragon has some crappy platforming segments in it, and unfortunately, The Revenge has even more. Some, such as a jumping puzzle on the gears of a clock tower, are fun, since you can fail the jumps and still survive in most circumstances. Others are miserable, since missing once means automatic death, and you only have three lives and can't continue once they run out (unless you use a cheat code which, weirdly, changes every three stages.) If you had unlimited continues, I wouldn't complain about the jumping puzzles at all.

My one single biggest complaint with this game is that if you play on the default difficulty level, you're not allowed to fight the final boss. This kind of thing is something I've hated in every game I've ever seen it in. Difficulty wise, Double Dragon II is definitely easier than the original overall, and most of your deaths will come from environmental hazards, since damage from enemies is toned down from the first game. Even so, I hate not being allowed to beat it on normal mode.

Something that was really fun for me when playing Double Dragon II was seeing just how many little things from it would later appear in Double Dragon Neon. The awesome riff that plays when you clear a stage, the helicopter attack, the airlock scene, the steam-powered tank battle, enemies entering the screen by cartwheeling, and the spikey crushing things that appear in later stages all return in Neon, and Neon's world map uses the Billy and Jimmy Lee sprites from this game. I've probably made it all too obvious that I absolutely love Double Dragon Neon, and in fact consider it one of my top games of 2012. Seeing where all these little in-universe references came from was pretty great.

If I were to recommend only one Double Dragon game to someone, it would be Neon, for reasons I went into detail in with its own review. Double Dragon II: The Revenge would definitely be my second pick. It's a massive refinement of the original game and a ton of fun in co-op. It's not only my new favorite classic Double Dragon game, but it's probably my favorite NES beat em up of all after River City Ransom. A huge, pleasant surprise for me, and it makes its sequel seem even worse in comparison. This one's aged well, definitely give it a shot if you're a fan of the genre.
Posted by surlaw at 11:52 PM