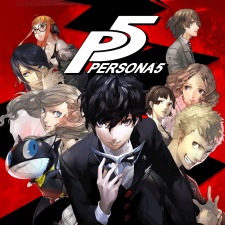 In spite of making my own turn-based RPGs and playtesting ones made by friends, my interest in the genre waned over the years. I'll pick up an occasional Pokemon game, but don't get excited for them. I've never played an Atelier or a Neptunia or any of the tens of thousands of similar looking games released every three months by Gust and Idea Factory. I enjoyed Final Fantasy XV, but even that series has moved on from turn-based combat. The last one I got excited about was Ubisoft's fantastic Child of Light, a small game that excelled stylishly.

I was a little unsure going into Persona 5. I've only played the original title in this series, released on the PS1 in 1996, and hearing that the latest installment was 80-100 hours long was honestly a turnoff for the modern me, while I would have eaten that up as a kid. With lots of flashy, graffiti style art, I knew it would win me over on style, but would I actually have fun? I'm happy to say that yes, this is indeed an excellent game, a high-water mark in its genre. 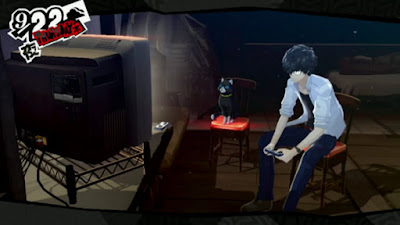 Nostalgia is a big part of Persona 5: This is a story about high school outcasts, but it feels like it's written for a retrospective audience (though there's plenty for young adults to enjoy too.) Characters are at first painted with broad strokes, making them easy to identify with and project your own high school memories on to, but each becomes more layered and complex, with relationships and bonds growing over time, slowly and carefully.

There's a constant sense of nervousness and of the inevitability of time here, with each section of the game given a time limit of in-game days that pass as you make your daily choices. Is it worth taking time out to study when you know the time you have left to see your friends is limited? Should you spend time working or doing your laundry? It sounds mundane, but the mundane aspects of the game are as appealing as its more fantastical elements. 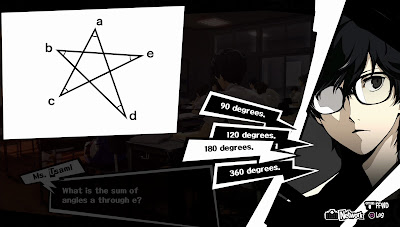 Persona 5's framing device puts players immediately into the action, letting us play around in a flashy scene that we won't revisit until 2/3rds of the way through the game: Our hero, Joker, is on the run from cops and monsters in a gaudy neon casino, jumping from awning to rafter as his buddies guide him towards an exit. We're told that there's a heist happening, but not the details. Those will come later. It's a great way to start the action up fast and furiously before slowing down and moving into the more leisurely pace of the game's first act. 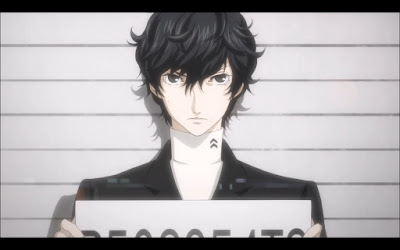 Once we cut back to the story's beginning, we meet our lead character (who players name in one of the most creative character naming screens I've seen) long before he'll become the masked vigilante Joker. He's a regular guy who took one brave action and paid a high price: He comes across a man assaulting a woman in the dark, rushes in to save her, and knocks the man's head into a guardrail. It's the right thing to do, but it ends with our lead being sued by this man and sentenced to a year's probation. Sent away to a new school, he lives under strict guidelines and the constant threat of jail, separated from friends and family. 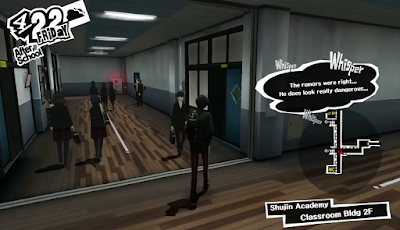 For the most part, the heroes of the game are talented outcasts surrounded by ugly rumors and the villains are privileged folk in positions of power who regularly abuse that power. Even if a couple of the good guys are from wealthier families, it's still a class conflict, focused on those without power vs. those with. Our lead soon meets a couple of friends (including a talking cat) suffering abuse at the hands of a lecherous but beloved teacher and chooses a unique method to stop him: By traveling into his subconscious and forcing a change of heart, bringing his dark side to the surface and forcing his conscience to take hold. It works, the teacher confesses his crimes, and our crew becomes part of modern mythology, a group of Phantom Thieves operating from the shadows to change wicked hearts. 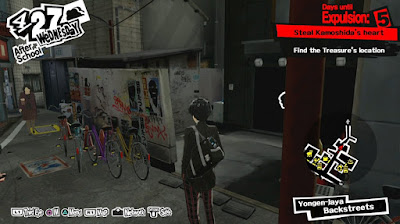 It would be easy to keep this conflict as a pure power fantasy, showing heroes triumphing over villains time after time, but Persona 5 smartly questions the justice in these methods. Yes, the targets of the Phantom Thieves are criminals, but the methods for changing their hearts and minds are easy to see as brainwashing or torture. Do the ends justify the means? Is it worth taking the easy path, versus struggling to find legal evidence? As our heroes see more success and watch their popularity grow, they get hungry for more power and fame, taking on bigger and bigger targets in an inevitable "pride before the fall" narrative. It's appropriate that you take up the mantle of "Joker," both in the wildcard sense and in the Batman sense, opposed by an ace detective with a questionable moral code. You also get your own Catwoman and Oracle. 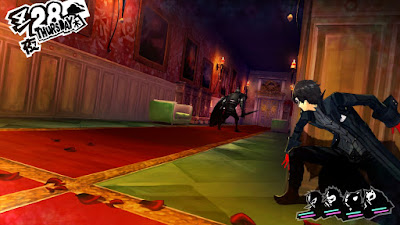 This game drills its themes and subtext into you so hard that it's impossible to miss; it's hard to even call it subtext when the game directs your attention to it this hard. I found this off-putting at first, but given the number of gamers I know that refuse to accept that games can even have themes and subtext, maybe it's necessary. Either way, I appreciate that it tries, and that it doesn't shy away from ugliness in its narrative. Much of the game is still a fantasy, but it is willing to say that some fantasies, even dark ones, are natural, as long as you recognize those dark impulses and remain kind. Letting the fantasy distort your world is the real danger, and it feels politically apt, as we get to constantly hear the thoughts of the general, fickle public. Sometimes doing the right thing hurts, sometimes it heals, and sometimes no one notices at all. 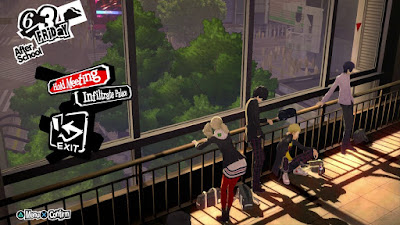 The game is divided between two worlds: Reality and the subconscious Metaverse. In the real world, you study, work, and hang out with friends. Choosing who to spend time with and how to spend time with them shapes the kind of conversations you can have, as every action affects one of five Social Stats. Becoming closer with different people opens up new story opportunities in reality and more combat options in the Metaverse. As every action consumes in-game time, you're limited in what you can do, and you will not see everything the game has to offer in one play through. Some friends you'll come to rely on, some will annoy you to the point that you may do your best to avoid them, and maybe you'll fall in love. However, you can't date Ryuji, the first dude you befriend, even if he's clearly fallen in love with you. 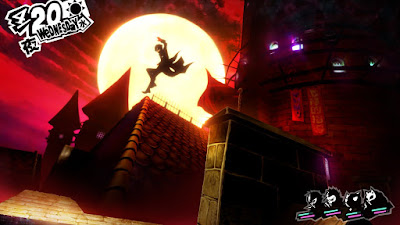 In the Metaverse, players encounter turn-based battles with monsters drawn from global mythology. Thankfully, there are no random battles. You can fight using physical weapons or magical skills given to you by your Persona, a hidden self that exists in each character (your lead character has the unique ability to control multiple Personas.) If you just mash the Attack command, you're going to fail; this game is designed to force you to consider party composition, which skills to learn, and how to best use them in combination. Do not ignore abilities that buff your stats or debilitate enemies; work hard to discover enemy weaknesses. Talk your way out of tough battles, or use your words to recruit enemies to your side. Resource management is a huge part of the strategy here, though you can always knock the difficulty level down. 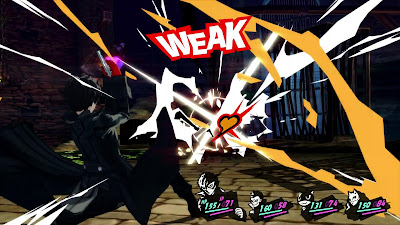 On difficulty, Persona 5 has a bit of a weird curve. The first dungeon is quite difficult, while the ones that follow are significantly easier, until the final couple where there's a sudden, large spike in enemy power. It feels uneven, but regardless, it's quite fun. I did get tired of the combat by the end, but it took a very long time, and I still enjoyed most of the later puzzles and story (it goes off the rails in that special insane way that RPGs tend to go, but recovers and ends very well.) 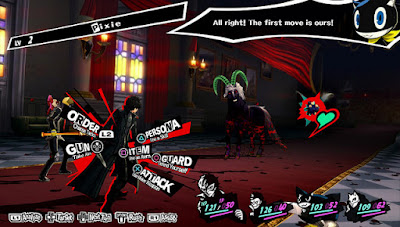 Persona 5's art design is one of its strongest elements. Every menu is pretty and stylish, which seems like an odd thing to praise but really does give the game life. Monster designs are great, each character is visually distinct, and a smooth-jazz soundtrack sets the music apart from other games. Some areas get a little too repetitive (the massive, sprawling Mementos dungeon you revisit throughout the game) but otherwise each zone is visually distinct and compelling it its own way. It's not the cleanest looking game (you can tell it was originally a PS3 game, with some surprisingly small areas and simpler textures) but its style shines through so hard that it makes up for any shortcomings. 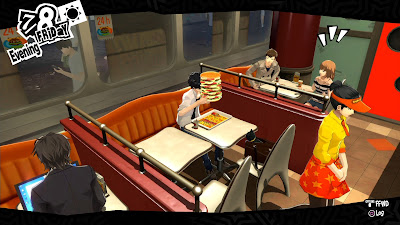 By the end of the game, I was a little sad to leave this world. It's excellently realized and well written, though there are some linguistic oddities that crop up again and again that feel like translation laziness. Finding companionship in fellow weirdos and making the best of your time connected to me deeply; this story absolutely does not say, "high school is the best time of your life," but rather, that it's a formative time to endure and grow through, finding yourself where you can. This is a solid coming of age story, approaching some of the same feeling and themes as Final Fantasy XV but with a more strongly structured narrative. Both are games that took many years to actually get released, so it's appropriate that they're games that examine growing pains.

One last note, more on a bureaucratic level than anything to do with the game itself: Atlus decided to block players from taking screenshots in a nice looking game where high schoolers constantly use smartphones to share their thoughts and much of the plot revolves around spreading information. It's a dumb decision, and I'm not sure Atlus realizes the irony of blocking people from taking pictures in a game where you play as these kinds of characters. It's a story of youthful rebellion published by a grouchy dad who tells you not to talk too much.
Posted by surlaw at 4:55 PM