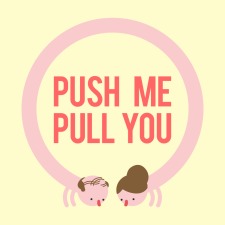 It's been a couple of months since I wrote a review! I've been busy with work, both at my day job and on my upcoming game, but it's time to get back to writing. Taking a deeper look into the games I play and movies I watch is personally rewarding, whether it's in finding a new appreciation for something I initially disliked or figuring out pitfalls to avoid in my own stories and games.


So where to start? Final Fantasy XV and The Last Guardian are finally out. Sony and Sega are renewing their pushing of the Yakuza series in North America. A new Nintendo system's coming out soon. Amy Adams is in every other movie and they're all good. There's been at least fifty new superhero movies in the last year.  What's relevant? What's important? What should I write about?

Your answer is probably not "Push Me Pull You," a weirdo indie game by developer House House named for a monster from Doctor Dolittle.

Push Me Pull You is my favorite title of 2016. I mean that in the literal sense, not as a synonym for "game;" the name Push Me Pull You is just fantastic. It's become a household phrase among my family, along with fun variations like Grip Me Grab You and Squish Me Squash You. It instills a stupid sense of cooperation, the type which phrases like Stick Me Stab You could never hope to achieve. It's a message of peace and hope. It's what we need in this clownpant of a year. 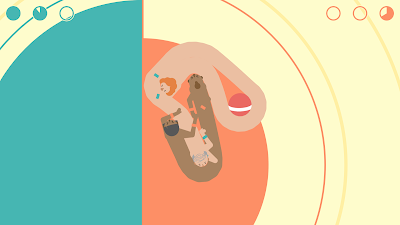 The game's not as good as the name. 2-4 players (it can't be played solo, there is no AI) each control one end of a horrible sausage monster, a fleshy mass that resembles a Saturday morning cartoon version of The Human Centipede. Using only an analog stick and no buttons, each player moves half of their meat-monster around a little arena, trying to push a ball into their opponent's half of the stage as their characters dig into the ground to pull themselves desperately across the field.

There are a few different match options, but the differences are minimal. There's next to no variety in how matches play out. There's no music during rounds, the interface is sloppy, and there's no way for two friends to team up against an AI. You're going to get some laughs out of this, but it's effectively a "played it once, seen it all" sort of deal. It lacks the variety of the similar (but far cuter and much more musical) Noby Noby Boy, or the enthusiastic, bombastic craziness of party games like Muscle March or a Wario Ware game. It's minimalist, but without much behind that. 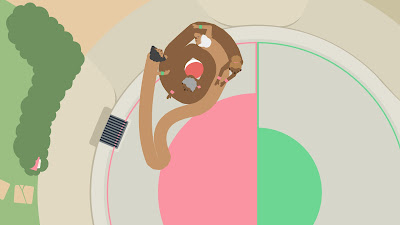 I respect the idea of coming up with a great name and tossing a game out there, flaunting convention and standards. I ran a game contest a couple of years ago where I would come up with titles and idiotic premises for each contestant, just to see how in the world they'd put anything so dumb together. Push Me Pull You is the kind of thing I'd make and send to some friends to have them say, "Haha, gross." It's endearing in its floppy foolishness, but only for a short time.

I'm glad games like this get made, but I wish it were better! The one song that plays on the title screen is great, why aren't there more? Why are the alternate play modes hidden in a submenu and not just shown when you start the game? Why is it $15?

Push Me Pull You: It's sort of OK, for a very short time. I hope this catch-up has given you a better understanding of the world as 2016 drags itself vomiting across the finish line.
Posted by surlaw at 9:23 PM