Chronicles of Teddy: Harmony of Exidus (2016, PS4) - Dirge of the Duck Knight 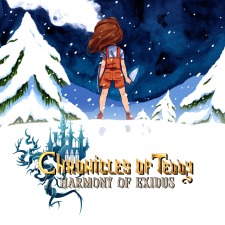 When I first saw Chronicles of Teddy: Harmony of Exidus pop up on the PS4 store I passed over it without much of a thought. The cheap sounding title, the nonsense subtitle (I was half expecting the game to be a Castlevania parody; it's not), and the nice looking but typical indie game pixel graphics did nothing to help the game stand out and catch my attention. It was only after I heard positive reviews from people who mentioned that the game was heavily inspired by Zelda II that I decided to give it a shot, and I'm very glad I did.


Designed by French developer Storybird Games and published by Look At My Game, Chronicles of Teddy is a well made action-platformer with its heart in the right place and only a few speed bumps along the way. Originally released on the PC as Finding Teddy 2, Chronicles of Teddy is an action-adventure sequel to Storybird's 2013 PC/smartphone point and click adventure, Finding Teddy. The plot isn't really important, so you don't have to play the original game to understand anything. This updated, retitled version of the game was released on PS4 and Wii U.


Chronicles of Teddy opens with a bizarrely long text crawl, Legend of Zelda style, that explains the history of planet Exidus and its monster residents in depth. A spider ruled the planet, he was sad, he met a girl from Earth, they became friends, a dozen things happened and now he needs your help. None of it really matters; it's a lot of world building and backstory for its own sake, and isn't needed to compel the player. The developer seemed to realize this later on, and the game's ending is wordless, instead telling its simple story with visuals.

The game play is the real draw here. Teddy takes the short-range, precision sword combat of Zelda II almost directly, with players able to stab forward, upward, and downward, blocking enemy attacks along the way with a small shield. The palette-swapped blobs, shielded knights, glowing skulls, and flying eyeballs of Zelda II all make appearances here (and our hero has a Zelda II poster in her bedroom,) which is both nostalgic for fans and also just a little shameless. Nothing wrong with a tribute, but at times the game does feel a little too close to its inspiration. Thankfully, the bosses here are quite different and mostly better than the ones in Zelda II.

Players can defeat monsters or find hidden chests to earn marbles, which can then be used to buy health and weapon upgrades. The upgrade system is more confusing than it needs to be, as the items you buy aren't explained and no manual is included. The swords are obvious: Buy a new sword, do more damage. How about new clothing? I assumed that would boost my defense, but I was wrong. Looking into outside sources, I found that upgrading your clothes increases the value of recovery items enemies drop. You can buy a ring which I assumed would influence my special abilities or unlock something, but it seems to just make your sword slightly stronger. Discovery is good when it comes to figuring out a game's world, its puzzles, and its enemies, and it's fine for certain items to remain mysteries. It seems silly that your basic equipment is left unexplained.


There's no Zelda II style magic system here, and there are only four new abilities to find as the game goes on. While that seems a little small, Chronicles of Teddy is a fairly large game, with four main zones, each with its town full of friendly creatures and palace where its boss awaits, not to mention plenty of puzzles and secrets. Figuring out how to enter each palace is a big part of the game, whether it's finding an item the palace guardian wants or finding a way to communicate and ask for entry.

One of the more unique features of this game is the ability to learn a musical language and play back its notes to communicate, to open locked doors, and to find friends. Each townsperson, whether they be a frog or an acorn, can teach you new words that can be formed by playing notes on a musical instrument. You need to find all of the note buttons before you're able to complete the game, and they're well hidden without ever feeling too obtuse. This game's got some nice, well designed puzzles that I enjoyed, from its platforming to the musical puzzles to learning the right words to say. There's minimal backtracking if you don't care about collectables and little time is wasted, although a few more shortcuts would be nice.

There are 50 fireflies to find throughout the game by singing is special locations, but unlike all other items in the game, they're not marked on your map, so remembering which ones you've already found is a pain, and the reward for finding them all is nearly inconsequential. Each zone also contains 25 items that a person in town wants, and finding all 100 and buying an upgrade opens up a new sword which does slightly more damage. For collectable fans, there's plenty here, but the rewards are underwhelming. There are plenty of chests full of money to find, but in true Zelda fashion, you'll have already bought every upgrade you'll ever need before you've found half of them, making the rest useless.


I don't want to sound too negative, because this is a good game: The combat's excellent (though you really need longer invincibility frames after taking damage; you should not be able to get hit four times by something before you're recovered enough to be able to move again) and the platforming is good from start to finish, supplemented by genuinely good puzzles. There's just a lot of little things that bugged me, and they became more prevalent towards the end, which is definitely weaker than the first half of the game, an issue I also had with the Metroid-inspired Axiom Verge last year. A difficult final boss is good, but if I die, is it really necessary to make me refight his three weaker forms again every time before I can challenge him again? This is one of the few moments where Chronicles of Teddy felt like it was wasting my time. The other was when it took me a little too long to figure out that I had to tap the Down button twice while jumping to use one of the new abilities I'd earned. No other action in the game works like this. Yes, I feel dumb.


Every issue I have with this game is something that could be improved in a patch. The core experience is solid and I had a great time for most of my run, and I'm very thankful that I didn't play the original PC release, which had no in-game map (Unfortunately, the game erased my map progress after I reloaded to keep playing after beating the final boss.) In spite of the odd name and little nitpicks, Chronicles of Teddy is worth playing for anyone looking for a challenging, but not ridiculous, puzzle platformer in the spirit of Zelda II. I'm hoping it gets a couple more patches to resolve the rest of my issues.