Catlateral Damage (2016, PS4) - A Good Time That Leaves You Yarning For More 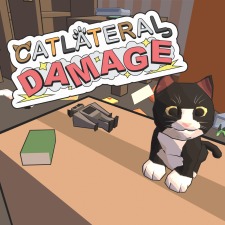 When Keita Takahashi directed Katamari Damacy in 2004, he introduced the world to a game which simultaneously reveled in complete destruction and peaceful innocence. Players rolled up giant balls of junk, demolishing everything in their path in order to build something new while accompanied by a positive soundtrack and adorable graphics. Catlateral Damage, an indie game by Chris Chung, follows a similar path with similarly simple, brightly colored graphics: Taking on the role of an everyday house cat, players must cause as much mischief and knock as many things off of shelves and counters as possible within a time limit.


The original PC version of Catlateral Damage was made by Chung in a single week as part of a competition to design an innovative first-person game. Players move, aim, and jump as they would in a typical first-person shooter, but this non-violent title replaces guns and explosions with paws and meows. Using the PS4's shoulder buttons, the player cat can swat and poke at objects throughout the house, though using your head to push things over works pretty well too. When you're not shoving stuff all over the place, you can press the Square button to meow or to pick up and carry small objects in your mouth. 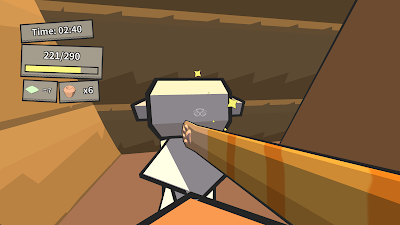 Something I really liked was how frustrating certain objects can be to push. Some papers and oddly shaped objects can take a lot of swiping to finally toss off a shelf, but this isn't a flaw; making the player perform this repetitive sort of action is hilariously realistic cat behavior. All that's missing is a stomp button to repeatedly, noisily step on paper bags and you've got my own personal cat experience right there. 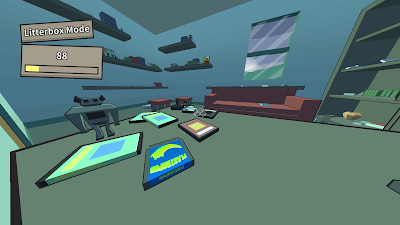 Most stages are set in ordinary houses, though finding special keys allows you to visit a museum, a supermarket, a mad science laboratory, and a paradise made of cardboard boxes. While most levels offer you a time limit and an object count, the museum and supermarket mix things up, with the museum asking you to knock over the most expensive items and the store asking you to find specific items on a grocery list. This was a much needed bit of variety and I wish there were more levels with goals like this. In most levels you'll find pictures of cats to knock over too; knocking them down adds that cat picture collectable to an in-game gallery. 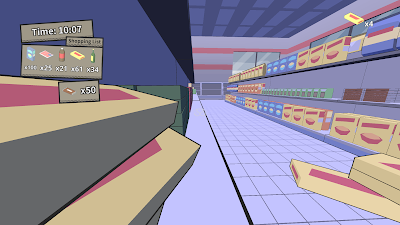 Catlateral Damage can be played in both an Objective Mode and a Litter Box Mode (an open mode with no time limits or goals.) Objective Mode presents a series of levels that you have to play through in order with the simple goal of getting a high score, but there's no way to compare scores with friends and you can't save, quit, and come back later on. When some of these levels can be ten minutes long, that seems like an unfortunate choice. Every now and then, events pop up such as capturing a mouse, attacking a laser pointer, or a shift in gravity, but these events aren't used for any real game building. At best, they'll give you a tiny stat upgrade. 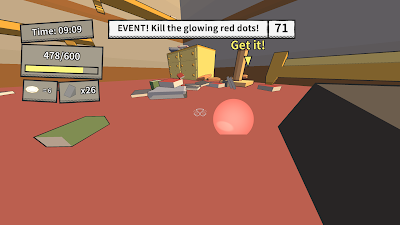 I've enjoyed Catlateral Damage. It's cute, it's funny, and it's charming, but I wish it had taken more of a note from Katamari. Having so few stages, and having them all basically be the same, is a downer. How about a stage where players are actually required to catch X number of mice? The mouse event is already in there, build a level around the concept. How about an obstacle-heavy stage where the goal is to knock over as few things as possible? Maybe an agility course based on the tunnels and platforms of the cardboard box paradise stage? The grocery list objective is great, why not expand on that? There are plenty of options already in this game that could be used to build a legitimate, Katamari-style campaign. I realize this game was made under impressively short time restraints, but with years since, I wish a more solid system had been added to it for the PS4 release. 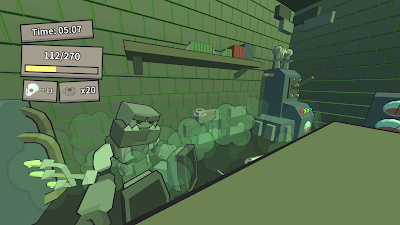 There are a few other little issues; trophies have trouble unlocking, and unlocking them is really one of the only objectives the game has to give it longer life. Sometimes you'll complete an objective, see an in-game notification about it, and never get your trophy. I wish there was a third-person camera mode, which would really help out with jumping in addition to being cuter. Lastly, since it's a low-key indie game, it's filled with cameos from other, more well known games like Octodad, Guacamelee, Goat Simulator and more, as is par for the course. I know people like seeing things like this but, in spite of loving two of those games dearly, it still feels cheap to me. 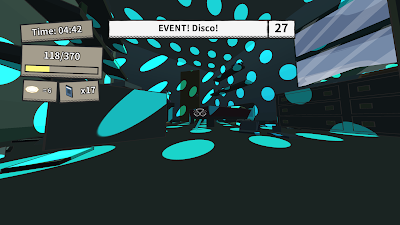 Catlateral Damage is a fun diversion that with a little work could be turned into a more legitimate game. The core here's great and the concept's wonderful, but it's just a little lacking. But maybe I'm not the real target audience here, in spite of my love of the idea; I'm just not a huge sandbox game sort of guy. 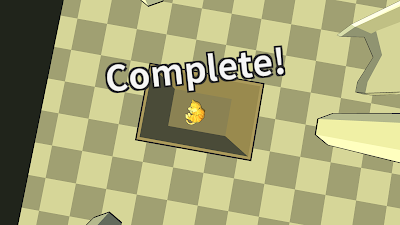