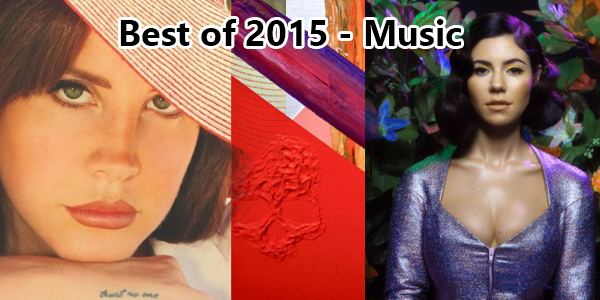 I wrote extensive pieces looking back on all of the 2015 movies I watched and games I played, which just leaves us with one more article to go: A look back at the new music I checked out. This is more of a bonus article than anything else, both because I didn't get a chance to check out a ton of new albums this year and because I lack the language to really write in depth about music. It's still fun to try, though!

Since this list is shorter, I'm just going to write a little bit about each album alphabetically, rather than setting up tiers. My favorites should be obvious either way.


Adele - 25: Adele's one of the most talented popular vocalists today and always puts out solid singles; this album's big track, Hello, is great. Unfortunately I don't think her albums ever really cohere into anything memorable, resulting in a handful of great singles padded out with boring to middle-of-the-road songs with dull production values. When I'd heard that Damon Albarn was working with her on the new album, I was thrilled: A talented vocalist in the hands of an amazing musician and producer would surely result in a fantastic album. Too bad that all fell apart.

Ben Folds - So There: Folds' new album is a collaboration with yMusic Ensemble and the Nashville Symphony, split in two between a series of eight pop songs and three longer orchestral pieces. It's playful and experimental, but doesn't have the lasting power or emotional resonance that 2012's The Sound of the Life of the Mind did for me.

Cœur de Pirate - Roses: French-Canadian singer/songwriter Béatrice Martin's follow up to her 2011 album Blonde features a surprising amount of English content from a performer who mostly sticks to French. In 2014, Martin worked on the instrumental soundtrack to Child of Light, one of my favorite games of that year. Roses marks a return to the pop stylings of her previous albums and is lovely.

David Gilmour - Rattle That Lock: Pink Floyd alumni David Gilmour takes his time with his solo albums. His fourth and latest comes almost ten years after 2006's On an Island, which itself was a follow up to 1984's About Face. Rattle That Lock is a slow, moody album that will certainly grow on me with time, but doesn't capture me immediately the way On an Island did.

Duran Duran - Paper Gods: I hadn't followed Duran Duran in recent years and had no idea they were on their fourteenth album; in fact, I don't think I've listened to any since 1990's Liberty. Paper Gods, with a gaudy pink and blue album cover adorned with decals representing past albums, is a solid album that feels straight out of the same time as the band's early albums. The album's single Pressure Off is the high point here, and Last Night in the City is similarly excellent.

Elle King - Love Stuff: The debut album of an artist I was surprised to learn is the daughter of comedian Rob Schneider. King's country/rock/blue sound, featuring gravely vocals and energetic banjo and guitar play, is a very authentic blend of pop sensibilities and singer-songwriter qualities. Her first single, Ex's and Oh's, was released in late 2014 and introduced King to the world as a musician. It's a catchy song that the rest of the album lives up to; the album is well produced and consistently entertaining, thanks to King's talent and attitude. I knew Ex's and Oh's but didn't hear the complete album until 2016 and am glad I checked it out. An all around great album.

Lana del Rey - Honeymoon: Lana's third album, Ultraviolence, was one of my top picks for 2014. Her latest, Honeymoon, takes the core sound and themes of Ultraviolence and improves on them in every way, telling a story of Hollywood gloom with an almost apocalyptic air of dread hanging over it. This album continues Lana's move toward more haunting, less single-friendly music and is one of my favorites of the year by far. I've loved all of her albums so far, and am very excited to see where she goes next.

Lenka - The Bright Side: Lenka remains one of my favorite artists to see live. I've been happy to see her each time she's come to Boston since 2011's Two, and she remains an incredibly fun, pleasant performer. The Bright Side isn't quite as exciting an album as Two or her self-titled original album, but it's on par with 2013's Shadows. The songs here really do come alive more when performed live with all of Lenka's cute props and fashion.

Ludvig Forssell - Metal Gear Solid V: Phantom Pain Soundtrack: Faux-80s media is all the rage, but it's almost always done in the most superficial ways possible. I love Taylor Swift's most recent album, but it doesn't feel like 1989 as the name implies. In video games, there's a constant stream of games designed after NES aesthetics, which often misfire in one way or another (some, such as Shovel Knight, nail it.) With movies, nothing in that stupid, immensely unfunny Kung Fury short film feels authentic. Ludvig Forssell, though: This guy can actually pull it off. The MGSV sound track is incredibly good, on top of sounding period appropriate to the story's world. One of my favorite tracks, A Phantom Pain, sounds like a lost David Bowie/New Order cross over. It's all great stuff. I generally don't listen to game soundtracks outside of the game itself, but this one is something special, a truly masterful score with unironic, genuine shades of John Carpenter that doesn't waste time laughing at itself or its audience. The authenticity and love put into this soundtrack elevates it far above others who have tried similar concepts. All of the licensed music in the game is also fantastic, but I feel the score really deserves recognition.

Lupe Fiasco - Tetsuo & Youth: I've been a big Lupe Fiasco fan since 2006's Food & Liquor. Its follow up, the dark, 2007 release The Cool, is one of my favorite hip hop albums. When Food & Liquor II hit in 2012, I was disappointed; nothing in that album caught me the way his first three discs did. My expectations were lowered for the new album, Tetsuo & Youth, but I'm happy to say they were totally exceeded: I was blown away by how good this one is, and it may be Lupe's best work. Every track on here is great, with Prisoner 1 & 2 being the standout.

Marina and the Diamonds - Froot: I'd heard a couple of Marina's songs before picking up her third album, Froot, but knew little about her. Since then, I've completely fallen for her, and this is one of my top picks of the year. Each of her three albums has a strong, distinct sense of character to it, with Froot being a more mellow album with a more hopeful sound. It doesn't discard the lovely bitterness found in Electra Heart and The Family Jewels, but directs it in a new way. Her songwriting, her character, and her odd space-lady fashion are all amazing.

Meghan Trainor - Title: Trainor had a couple of big singles in 2015 that could be heard absolutely everywhere: All About That Bass and Lips are Moving were inescapable for a while. They're catchy songs with a nice blend of modern pop and classic doo-wop sounds, a style that she carries throughout her first mainstream album release. I want to like her more than I do; I think her songs are instrumentally fun and she has some good intentions with them, but I actually dislike most of her lyrics. These are songs that I can enjoy if I'm not paying attention, but as soon as I do it just takes me out of it.

Warren G - Regulate... G Funk Era, Pt. II: Warren G's spiritual sequel to his 1994 debut album is a 15 minute EP released in tribute to the late Nate Dogg, Warren's long time collaborator who passed away in 2011. In spite of being a mere four musical tracks and one spoken intro skit, Regulate II is a phenomenally good set of music. From the old school My House to the chilled out Saturday to the horror film aesthetic of Dead Wrong, these songs are expertly crafted and nail the tone they're going for.
Posted by surlaw at 4:41 PM

Email ThisBlogThis!Share to TwitterShare to FacebookShare to Pinterest
Labels: 2015, music, year in review