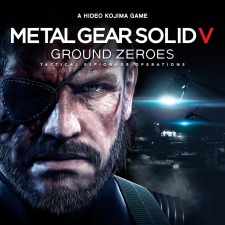 On the first of September, the almost 30 year long Metal Gear saga will see what may be its final chapter. Tension between the series' writer/director Hideo Kojima and publisher Konami has been a topic of interest for the last few months, and all signs point to Kojima leaving once the game hits shelves. Development of what would have been his next game, Silent Hills, has been shut down, to the disappointment of everyone who loved the P.T. demo. It's ironic watching a man who spent 30 years working on stories about internal intrigue, information control and soldiers being used and discarded by their bosses leave a company whose image he's been so integral to developing under a cloud of shady rumors, leadership conflicts, and allegedly poor employee treatment. Something tells me his "leaders always use you" rhetoric might hit a little close to home; after all, you write what you know.


Whatever Konami as a publisher chooses to do with Metal Gear from here on out is unclear (thought I've got a couple of guesses) but it's unlikely to involve Hideo Kojima. Thankfully, the next game, Metal Gear Solid V: The Phantom Pain, looks to fill in the final chronological piece of the story, showing us what happens between the events of Metal Gear Solid: Peace Walker and the original Metal Gear, as once hero Naked Snake / Big Boss transitions from hero to demon. There have been some bumps along the road, but Kojima has told the story he wanted to tell, and it looks like we'll see a clear enough conclusion with this last game. 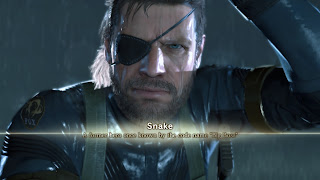 It's been a long, strange trip on the road to Metal Gear Solid V. When The Phantom Pain was first announced, it was with a fake director and developer, though people quickly realized it was a Metal Gear game. Shifting identity/ideology and the control of information are both major themes of the series, so it was a pretty fun way to introduce the new game. News got weirder as David Hayter, the English voice of
Solid Snake (and later Big Boss) since 1998's Metal Gear Solid, was being replaced by Keifer Sutherland. Thematically, it makes some sense to use a new voice; after all, the Big Boss of MGS5 is a very different person than the dopey goofball we met in MGS3: Snake Eater. As a fan of Hayter's campy performances, I'm disappointed. While I like Sutherland as an actor, I wish they'd gone with Richard Doyle, who did a good job playing an older Big Boss in Metal Gear Solid 4 in 2008.

One of the strangest decisions of all was to split the game into two parts, sold separately. Story-wise, this isn't new for Metal Gear: Metal Gear Solid 2's Tanker Chapter and Metal Gear Solid 3's Virtuous Mission are both short prologues that introduce the game's world and basic concepts before throwing players into the larger story. Metal Gear Solid V's prologue, Ground Zeroes, would work very well as the opening hour or two of the final game; instead, it was sold on its own for $30-40, and will not be included as part of The Phantom Pain, in spite of setting the stage for everything in that game (PC gamers who preorder on Steam do get a free copy of Ground Zeroes, at least.) 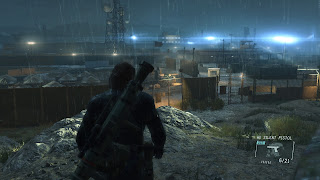 Ground Zeroes is an extremely well made little game, but the whole thing stinks of Konami getting angry with how long it was taking Kojima to finish the new Metal Gear, demanding he release something to recoup some of his team's expenses; it was also one of only three console games the publisher released in 2014, the others being Castlevania: Lords of Shadow 2 and their yearly Pro Evolution Soccer series.

All of the drama and mystery is fascinating and sad, and it's unlikely that the public will ever know the full story. But ultimately, what really matters is the game: Will The Phantom Pain be good? It's had a series of great trailers and gameplay videos. Word of mouth's been very positive, and aside from Peace Walker, I've never been let down by a mainline Metal Gear game (and Platinum Games' spinoff, Revengeance, rules too.) But ultimately, the biggest indicator of Phantom Pain's gameplay quality is already here, with Ground Zeroes. 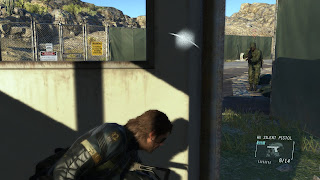 Like the rest of the series, the Ground Zeroes prologue focuses on stealthily infiltrating a hostile area, with fighting as a last resort. What's changed is how players can approach the mission. While the previous games focused largely on carefully placed guards who patrolled small rooms and halls, turning each encounter into a little puzzle, Ground Zeroes moves towards a more open-world approach. There's always been a lot of player freedom, but the huge, open map presented here is a game changer. Players can approach their objective from any direction with a decent amount of tools at their disposal (the range of tools looks to be massively expanded in The Phantom Pain) to make it a completely different experience from player to player. The series controls have never been smoother, and stealth, gunplay, and hand to hand combat all feel completely satisfying.

All of Ground Zeroes is constrained to one map, but it's a large, well designed one that feels like a real, living base. The main mission takes about an hour and a half to complete, and there are a few side missions available that mix things up, from a dramatic helicopter rescue mission to sabotage to assassinations. There's even a bonus mission where you play as Raiden, though it's not quite as fun as he was in Revengeance. 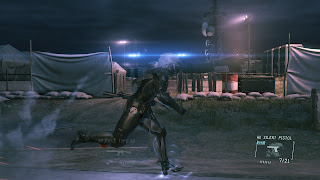 Since Metal Gear Solid, these games have always gone for a cinematic angle, for better or worse. I love the goofy, over the top cutscenes in the older games, but I'm often bored by the long, drawn out Codec radio scenes (I love the optional, comedic Codec scenes, though.) Ground Zeroes follows up what Peace Walker started, shifting communication with your allies from black screens with text and voice over to radio communications that play during your actual mission. You no longer have to bring everything to a crashing halt mid mission; instead, simply hit L1 and your handler will let you in on some intel. It's a massively nicer experience. 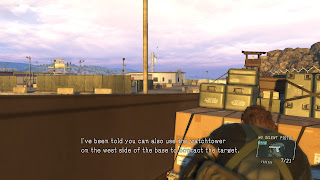 There are still a few actual cutscenes here, but their cinematography has improved massively from the previous games. Kojima has taken an interest in unbroken, single-shot scenes, and uses them effectively. The camera feels at once both an organic element of the world and a perverse spy, looming gleefully over the suffering of our lead characters. A lesson to all game makers trying to stick movies into their games: If you're going to do it, do it right. Take a look at this game and Naught Dog's Last of Us to see how it should be done. Lighting, motion, and weather all combine to make the scene feel alive, instead of just showing two talking heads bobbling at each other. 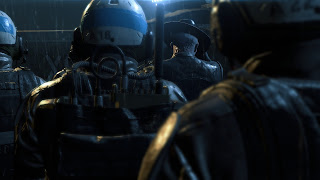 The writing in Ground Zeroes is the only place where I'm let down. As the mission opens, Big Boss and company learn that Paz, a double agent who betrayed him in Peace Walker, has survived. In Peace Walker, Paz is introduced as an anime schoolgirl who's actually totally a secret adult, and players are taught how to control the camera in cutscenes by getting a chance to peep through her shirt. She later hijacjks a singing giant robot, intent on killing the men she betrayed and taking back the mechanical monster as a prize to her true bosses. She, of course, does this all in her underwear. Peace Walker's a pretty stupid game. 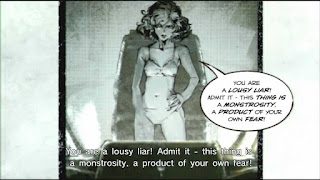 Flash forward to Ground Zeroes, where Paz is being held and abused in an American black site prison modeled after Guantanamo Bay. She comes back from the dead so that we can learn just how evil the bad guys are, as they abuse her, physically, mentally, and sexually, in a series of audio tapes the player can find. A tonal dichotomy between darkness and whimsy has been a part of Metal Gear since the beginning, but never has the series' tonal whiplash been as abrupt as Paz's story. It's overly gross and gory, and while it's not without purpose, it feels cheap: Kojima is horrified by the America prison system and the abuses perpetrated by American soldiers in places like Abu Ghraib, and I agree with him. That said, there's not even a hint of subtlety here. Kojima's generally not a subtle guy, but "torture is bad, soldiers without oversight is bad" could be played with a lot more nuance than we see here. And it just seems like bad taste to bring a character back from the dead just to show her get tortured and abused some more. 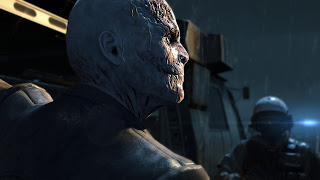 Outside of the optional missions, Ground Zeroes lacks a lot of Kojima's typical, endearing weirdness. There's nothing supernatural, nothing metaphysical, and nothing truly mysterious going on here, beyond "who set all this up?" The Freddy Kruger-looking villain Skullface shows some potential, but we see very little of him here. It's the most grounded the series ever feels, even with some pretty melodramatic line readings. Thankfully, it looks like The Phantom Pain will be a lot crazier, as we've already seen magical nightmare flame whales, a hellscape hospital, and a character that seems to be a young version of Metal Gear Solid's fourth-wall breaking Psycho Mantis. 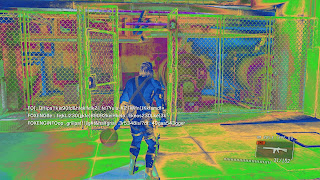 Ground Zeroes is a fun little sandbox and a solid taste of what's to come, even if the writing is disappointing. I'm happy to have played it, but at the same time, I still wish it was included as the opening act of The Phantom Pain instead of its own thing; I can't imagine how confused someone will be if they jump right into Phantom Pain without playing this first. Kojima's whole saga, both in game and out, has been a hell of a trip, and soon, we'll finally get a chance to see how the final chapter pays off. And even if it's a let down of a story, at least we know players can steal sheep and set up an off-shore petting zoo to keep their mercenary army happy. 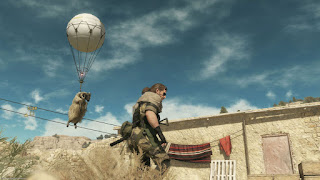