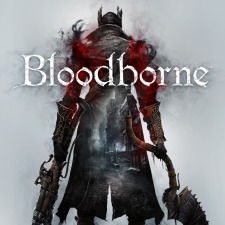 In all but name, From Software's PS4 exclusive Bloodborne is a sequel to the Demon's/Dark Souls games that first caught on like fire in 2009. While a secondary team at From worked on Dark Souls 2, series director Hidetaka Miyazaki was hard at work on this new title, which takes the series from olden kingdoms of sword and sorcery to a Victorian setting with a heavy H.P. Lovecraft influence. With a heavier story focus on horror and a heavier gaming focus on speed and relentless rush downs, Bloodborne, while owing much to its predecessors, is very much its own beast.

There will be some spoilers in here. I don't think they're a big deal. I've blacked out the most major spoilers, but those are just my theories anyway. If you're the kind of Souls player who is so sensitive to spoilers that you don't even want to know the names of places, might as well stop now. 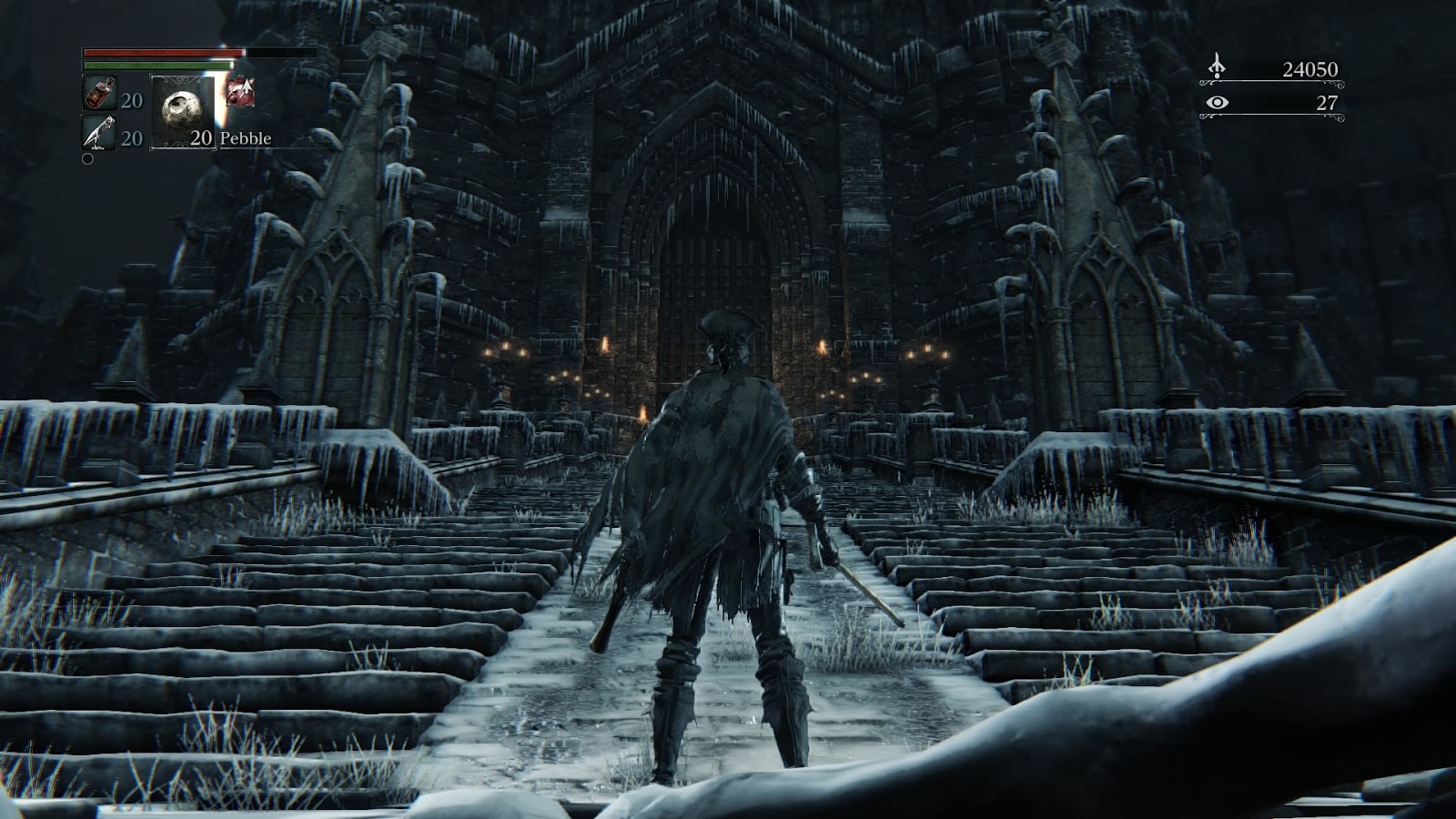 While it controls almost identically to a Souls game, Bloodborne is without a doubt a much more action-heavy title. It was certainly possible to play the old games with no shield and aggressively roll into every enemy, but in Bloodborne, that's the only way to play: You're given only one, mostly useless, shield, you have guns but they're mostly used to stagger enemies rather than deal damage, and there's no traditional magic system. Later in the game you can find devices that are essentially magic, but they eat up your bullets, are few in number, and can't be relied on exclusively to complete the game. Coming off of spellcaster runs of the Souls games, Bloodborne gave me a ton of trouble at first, but once I learned what it wanted from me it became very natural. 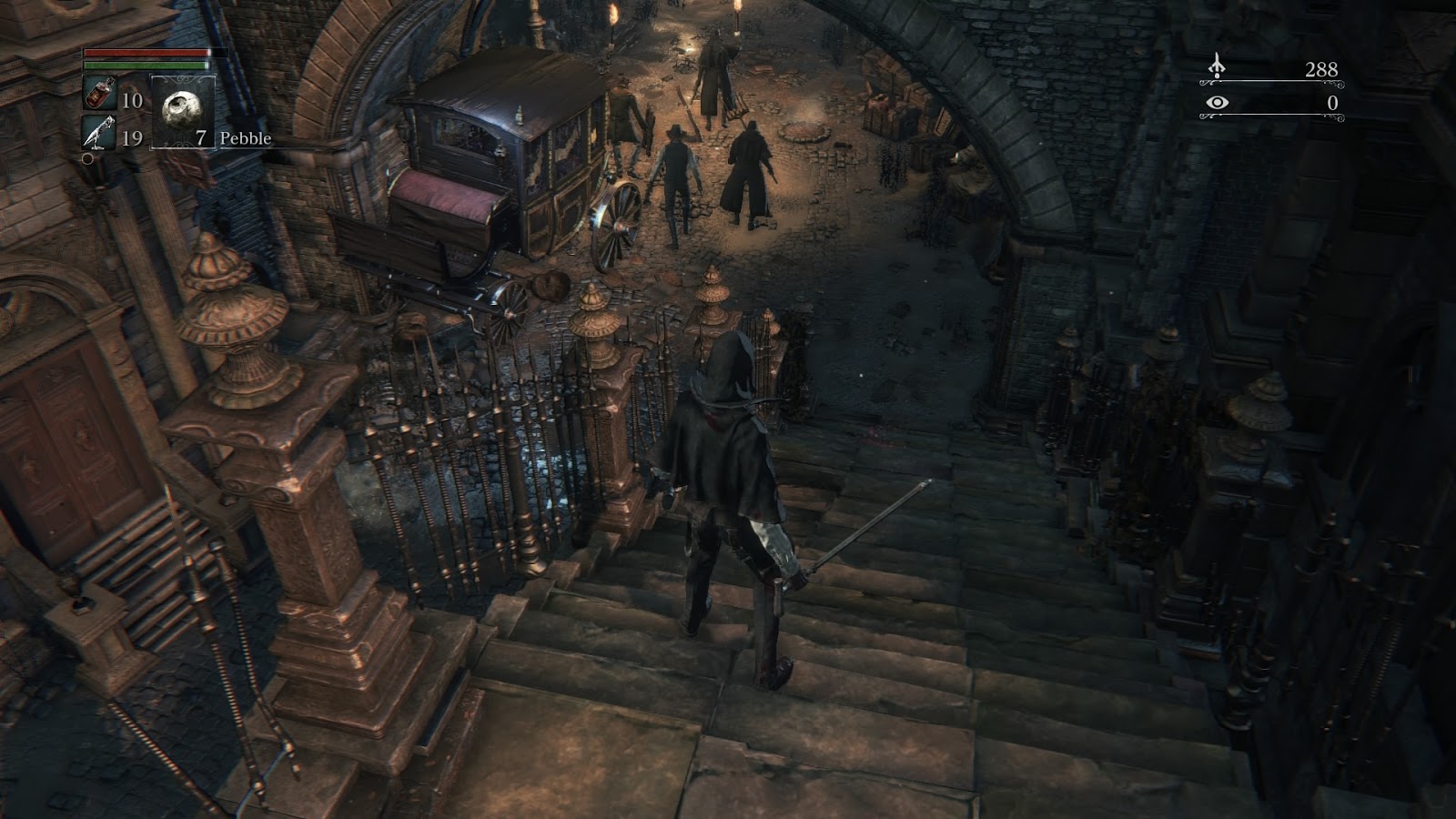 Enemies hit hard, but if you immediately strike back you can regain your lost health by absorbing the blood of enemies. This is a nice risk/reward system, since it forces you to stay in close and act aggressively with dangerous foes to regain health while risking a greater loss. You have limited healing items outside of this, which is obnoxious after the Estus Flasks in the last two games that refilled when your character rested. You can carry 20 healing Blood Vials at a time, but if you have trouble in certain areas you can quickly run out, especially early on. It's not hard to earn or buy more, but it does take you out of the game's wonderful atmosphere if you need to stop and grind for potions and bullets. 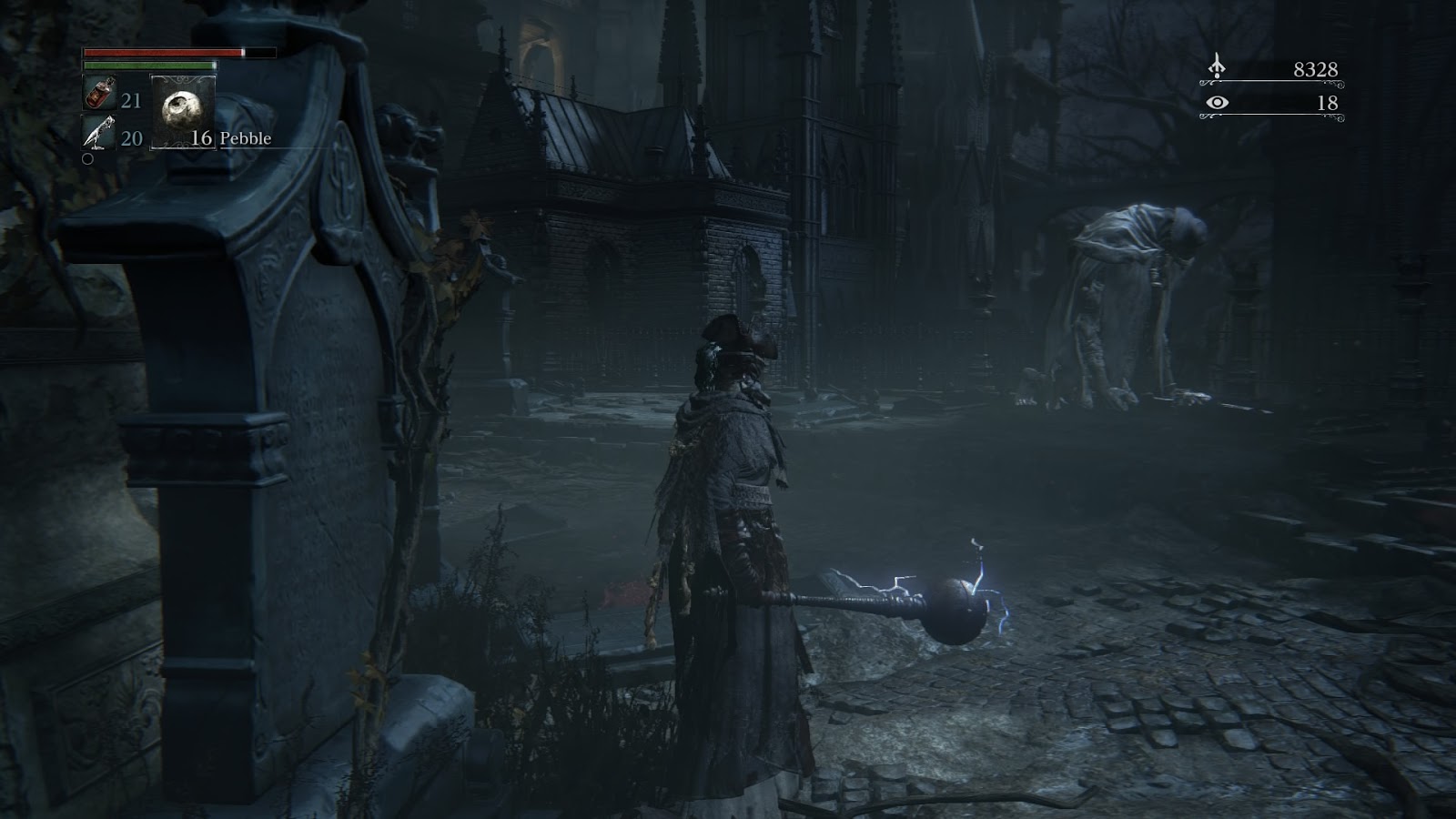 There are fewer weapons this time around, but each feels much more unique. Every weapon feels completely different, and some will click with you immediately (for me, a cane that turns into a whip and a lightning-powered mace) while others will feel really off. You can build your character with a focus on either Strength or Skill, and all weapons scale mostly on those two stats. The whole system feels a lot more simplified than in the Souls games, but it has enough variety that I never felt that it needed more weapons. Armor, on the other hand, might as well just be cosmetic, since there's very little difference between sets aside from some resistances. 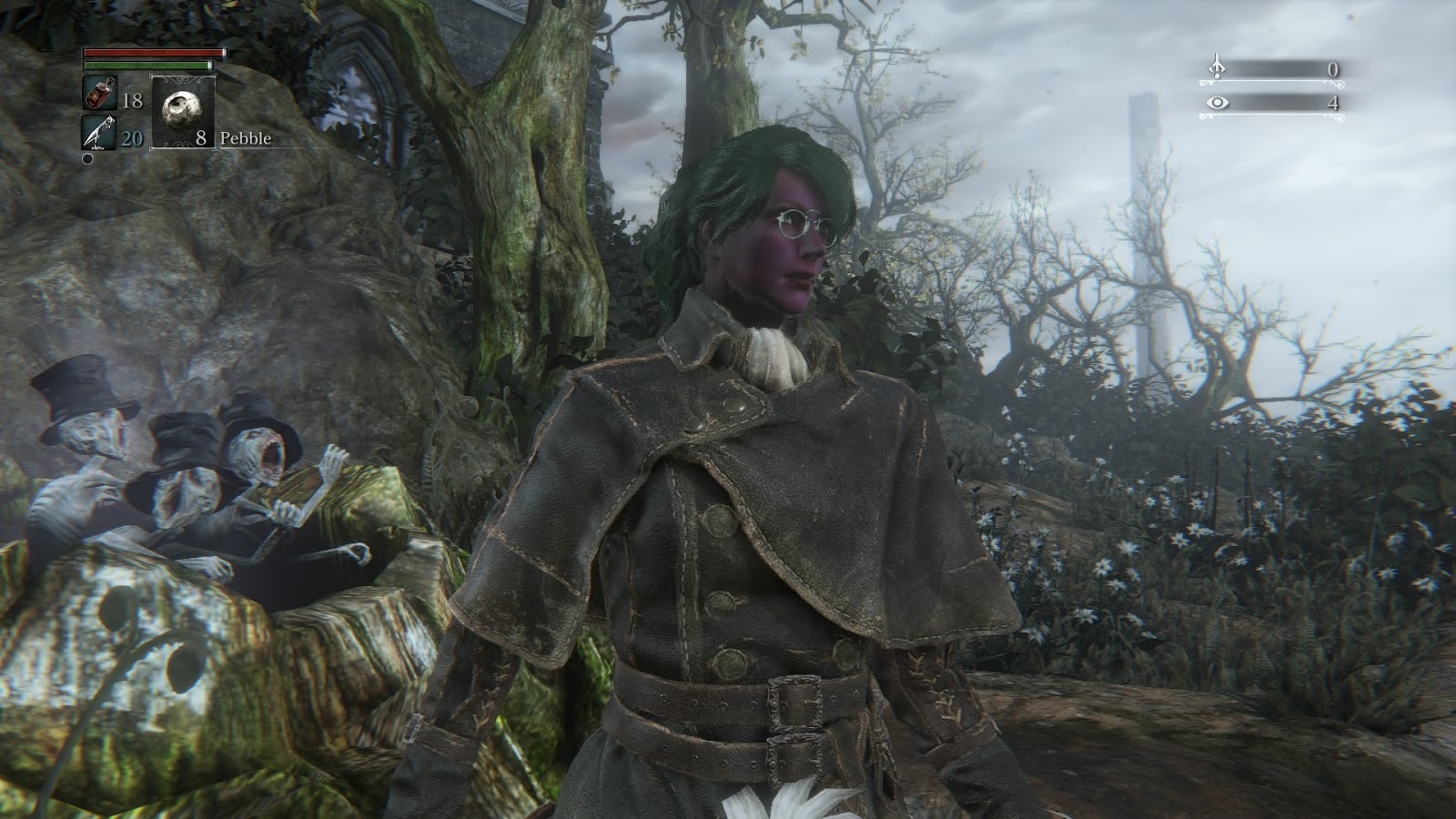 In previous games, you could parry using a shield or certain daggers, leading to a stunned enemy that you can then riposte for big damage. Bloodborne replaces this system with its guns; shoot at an enemy while it's mid attack and you may stun it and leave it open to a huge Visceral Attack. The early enemies have very generous parry openings, so the game actually does a decent job easing you into the system.

The only drawback to this game being so focused on one type of play style is that it hurts replay value. Yes, the weapons control very differently, but you're going to be a close-range fighter focused on dodging enemy attacks up close no matter what. You can't try an archer run, or a priest run, or a sorcerer run, or a tank run. What's here is implemented nearly perfectly, but I can't imagine playing through it as many times as I did Dark Souls. 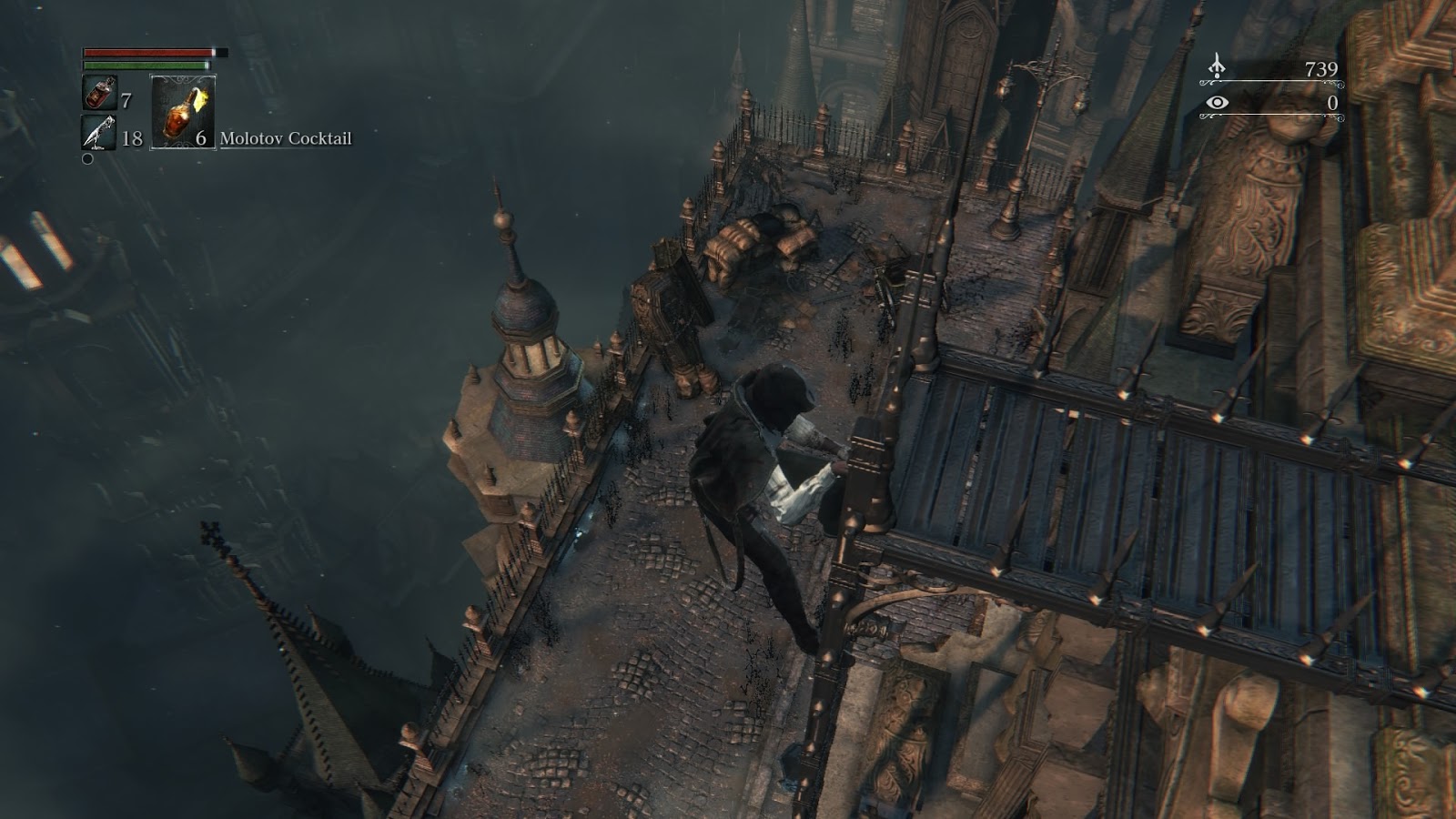 While Bloodborne is a spectacular game, it's not perfect, but none of its imperfections were enough to bother me too deeply. To just fire them off quickly:

While that seems like a lot of beef, nothing is so serious that it really hurts the game, outside of the load times being infuriating. I sincerely hope a later patch adds items to make the lanterns function more like the old bonfires. 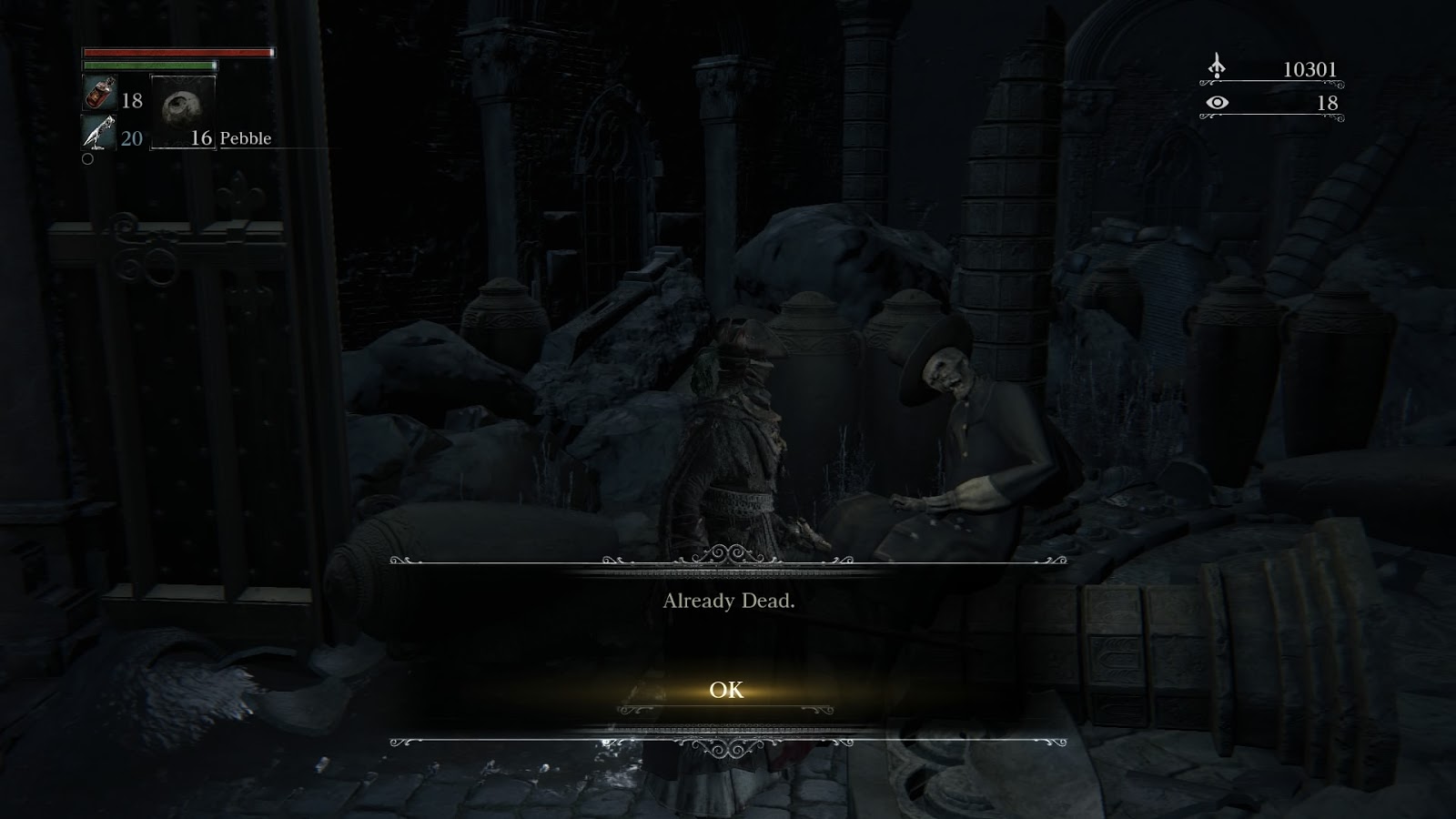 Onto a discussion of the plot: Bail out if you don't want to know anything about anything that happens.

Horror Within and Without

As Bloodborne begins, you awaken in a clinic in the city of Yharnam, where a dirty old man tells you not to worry about a thing. He begins a blood infusion to, presumably, cure you of some sort of plague that's been ravaging the countryside. As you pass out, he tells you not to worry, just think of this all as a bad dream. You open your eyes and suddenly there's a werewolf rising out of a puddle of blood, flames shooting up at it to save you, and you make friends with some creepy little spooky skeletons who you can later give funny hats to. You can use these guys to leave messages for other players, as you could with the Soapstones in Dark Souls, but it's definitely funnier here seeing your messages being held up by grumpy skeletons wearing top hats. 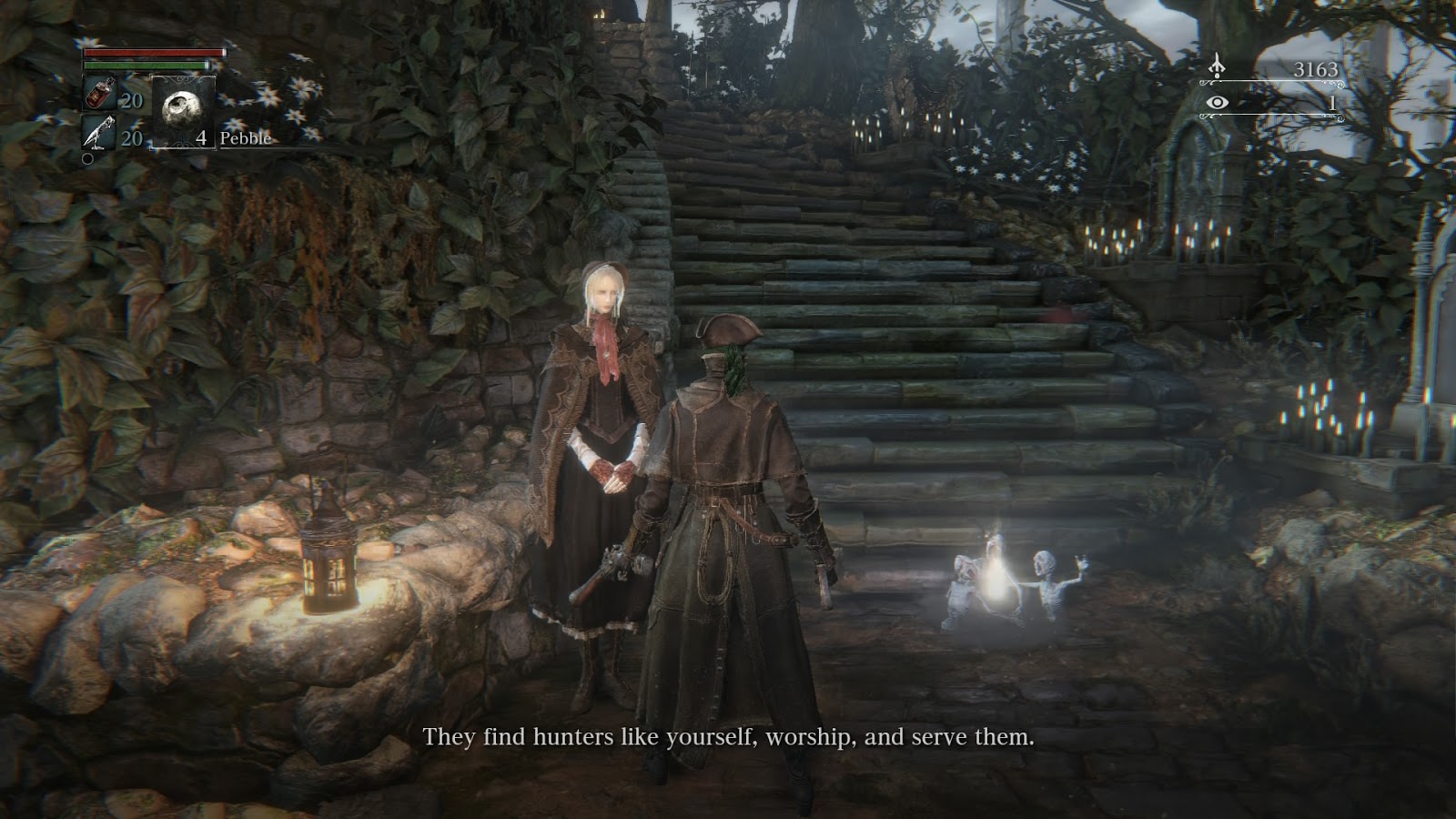 Whereas I felt like an archeologist exploring dead kingdoms in the previous games, here I feel like a detective trying to make sense of anything happening right in front of my eyes. This is a dying world, not a dead one, and I want to figure out why. By meeting and defeating bosses, both on your own and by assisting other players in co-op, you gain Insight, which can be consumed to buy some items and to summon other players for assistance. The otherworldly nature of the town becomes more evident as you gain more Insight, and enemies become more powerful. The number of spooky skeleton buddies in town also grows. It's a good alternative to World Tendency in Demon's Souls, a system where success or failure made the game easier or harder, since you have more control over it and it works in service to the game's plot. There's a lot of talk in this game about "gaining eyes on the inside;" you may regret it. 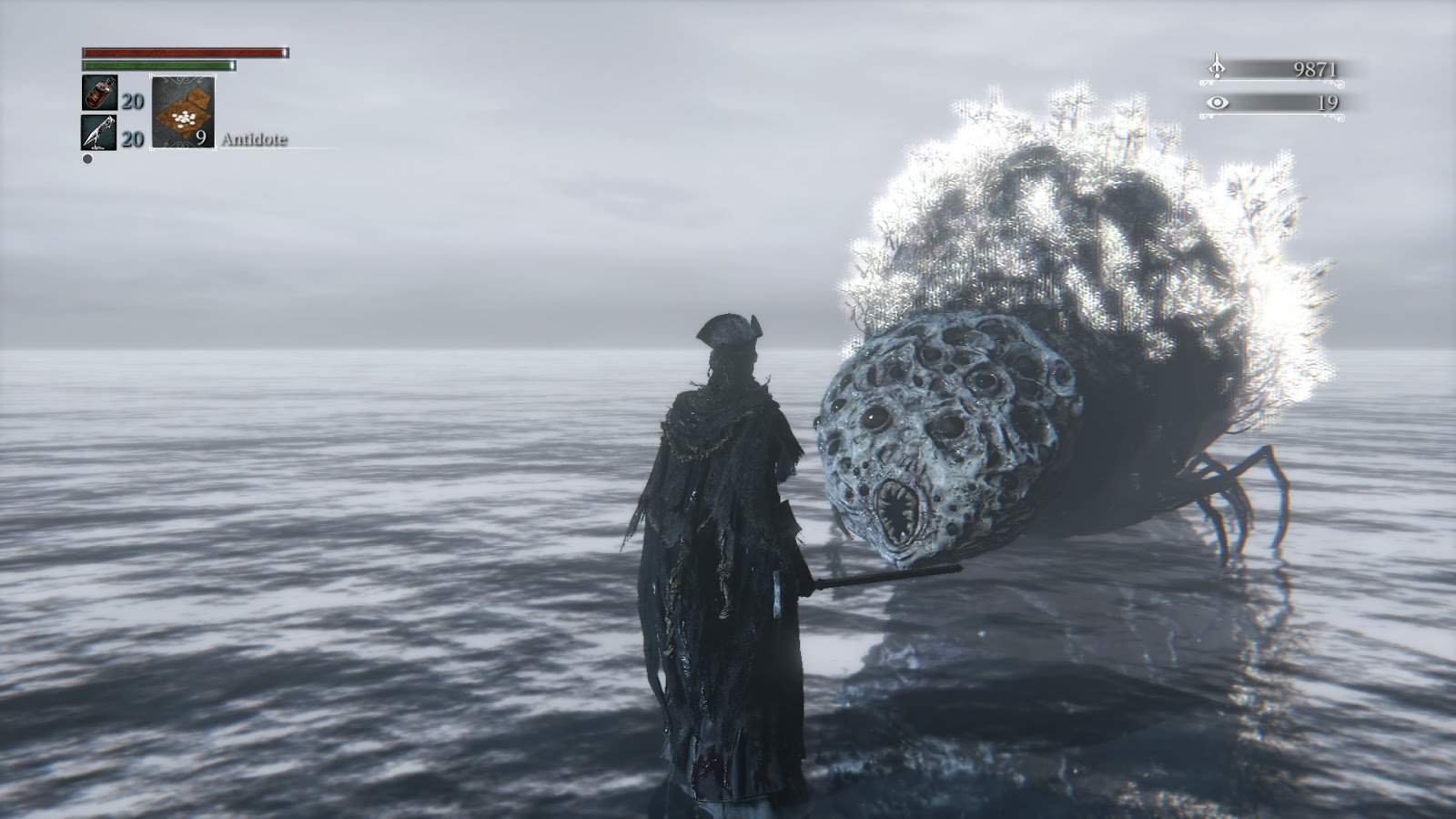 Bloodborne plays with ideas of the fluidity of reality, dreams, imagination, and madness. In typical Souls fashion, it's never entirely clear what's happening or why, but by digging through the world's items and lore you begin to get a better idea. The basics: There's a plague, people are turning into Beasts, and Hunters such as yourself come around to kill the people who have turned. Bigger, badder monsters soon show up as the day turns to night, and soon there are tentacle monsters and otherworldly horrors all over the place. The Healing Church and some research done at a now ruined academy have drawn them here. 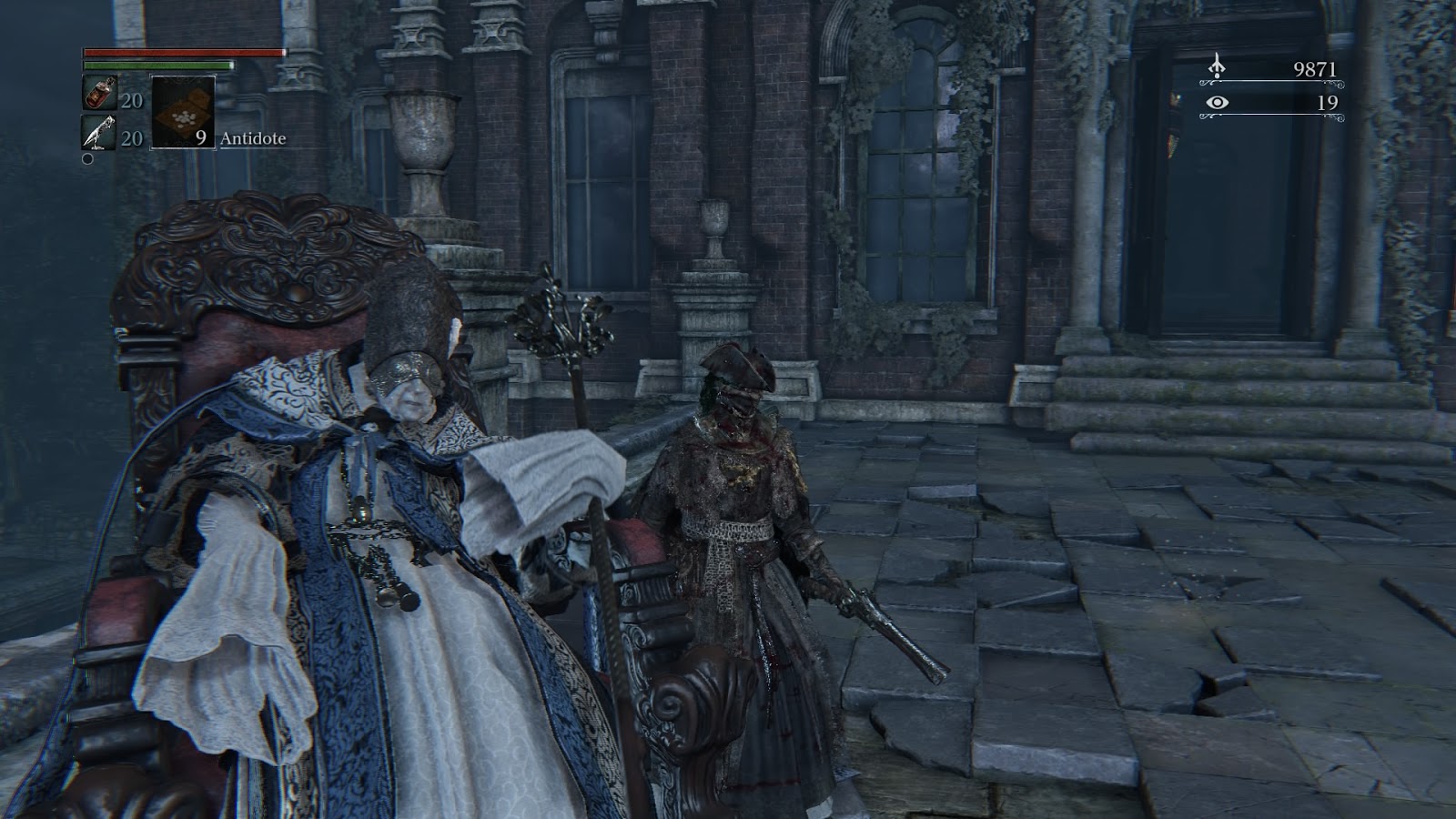 This stuff's all laid out pretty clearly, and it's up to the player to think beyond the surface to try and make sense of who exactly caused the catastrophes that are happening and what the mysterious Great Ones really are. I'm happy enough with them being (highlight to read spoiler) space aliens summoned by humans to gain enlightenment, but instead bring nothing but death in the form of evolution. Gaining cosmic wisdom doesn't mean a whole lot if you're now a floppy squid or a guy with forty snakes coming out of his neck. There's a lot of blatant Lovecraft at play here, but also a lot of modern alien conspiracy, choosing the tall, white other worldly beings over the more popular Greys. The whole "warring magic schools summon an unborn moon creature is also the topic of Aleister Crowley's Moonchild.

Beyond the game's plot, there's a lot of heavy-handed subtext involving parenthood. Part of the plot involves waiting for a chosen child/monster/thing to be born that will redeem the world/destroy it. While that's not an uncommon plot element, the child as salvation/destruction is evoked so heavily here that it really feels like a writer's way of dealing with parenthood anxiety. Calling the most threatening area in the game The Nightmare of Mensis/Menses and tying the threat level of the world's monsters to a moon cycle (that becomes its most threatening when it becomes red) adds a level of sexual subtext that's not the most focused and yet still weirdly compelling. 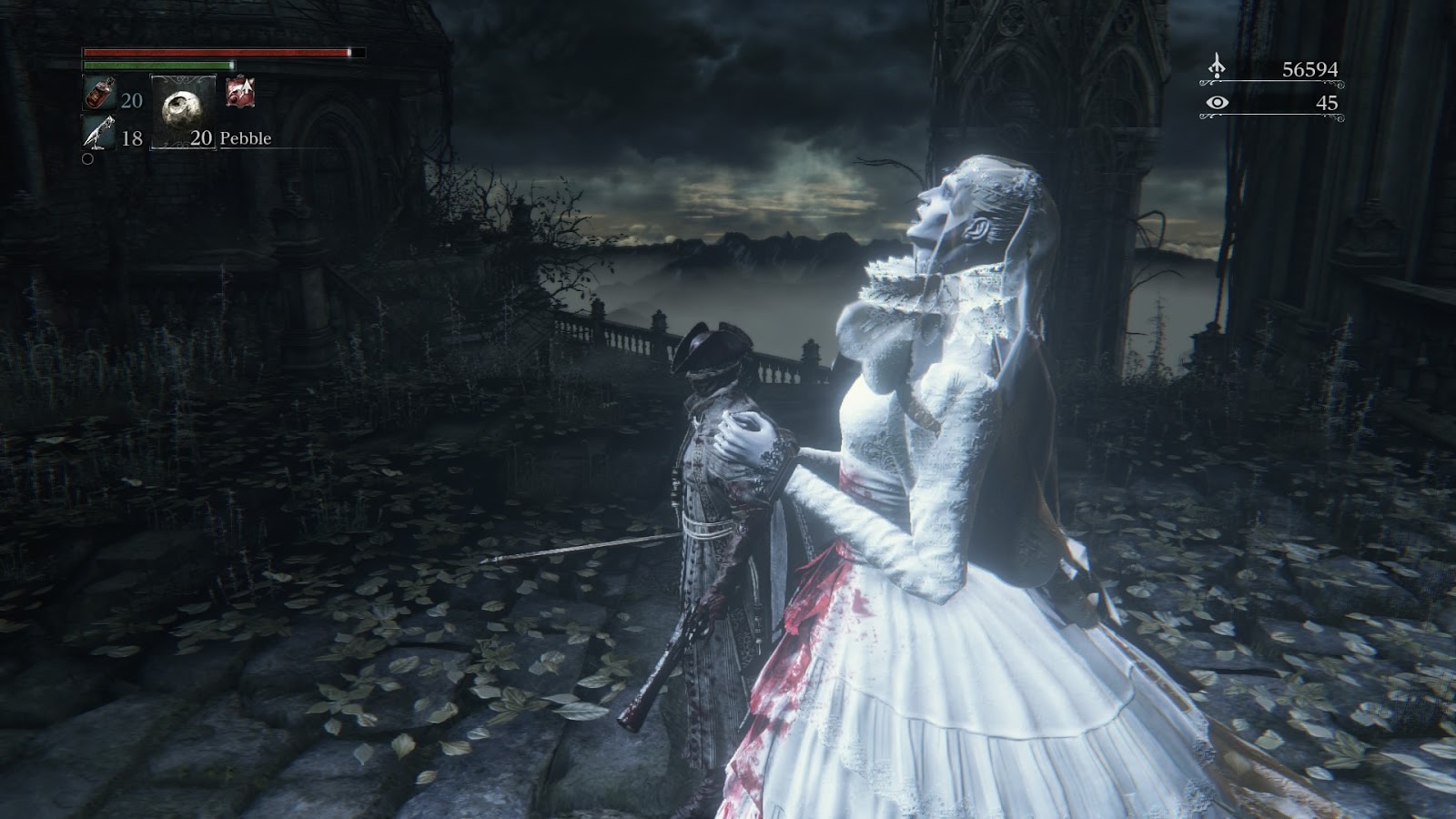 The game presents sexuality and its consequences as a nightmarish thing, which is not unusual in film and literature but pretty unconventional in a video game. It's blunt and at times kind of gross, but it's also gutsy. It's not an attack on sexuality, but rather a cathartic exploration of the anxieties surrounding it. There's sexual text, subtext, and metaphor at play, and coupled with a Victorian town torn apart by "blood impurity" causing uncomfortable transformations, the transmission of "beasthood" can be seen as a metaphor for sexually transmitted disease. Syphilis is a lot scarier than werewolves, anyway. While the Lovecraft influence is strong, the body horror and weird sexuality also give Bloodborne a David Cronenberg flavor (specifically, his 1975 film Shivers comes to mind.) 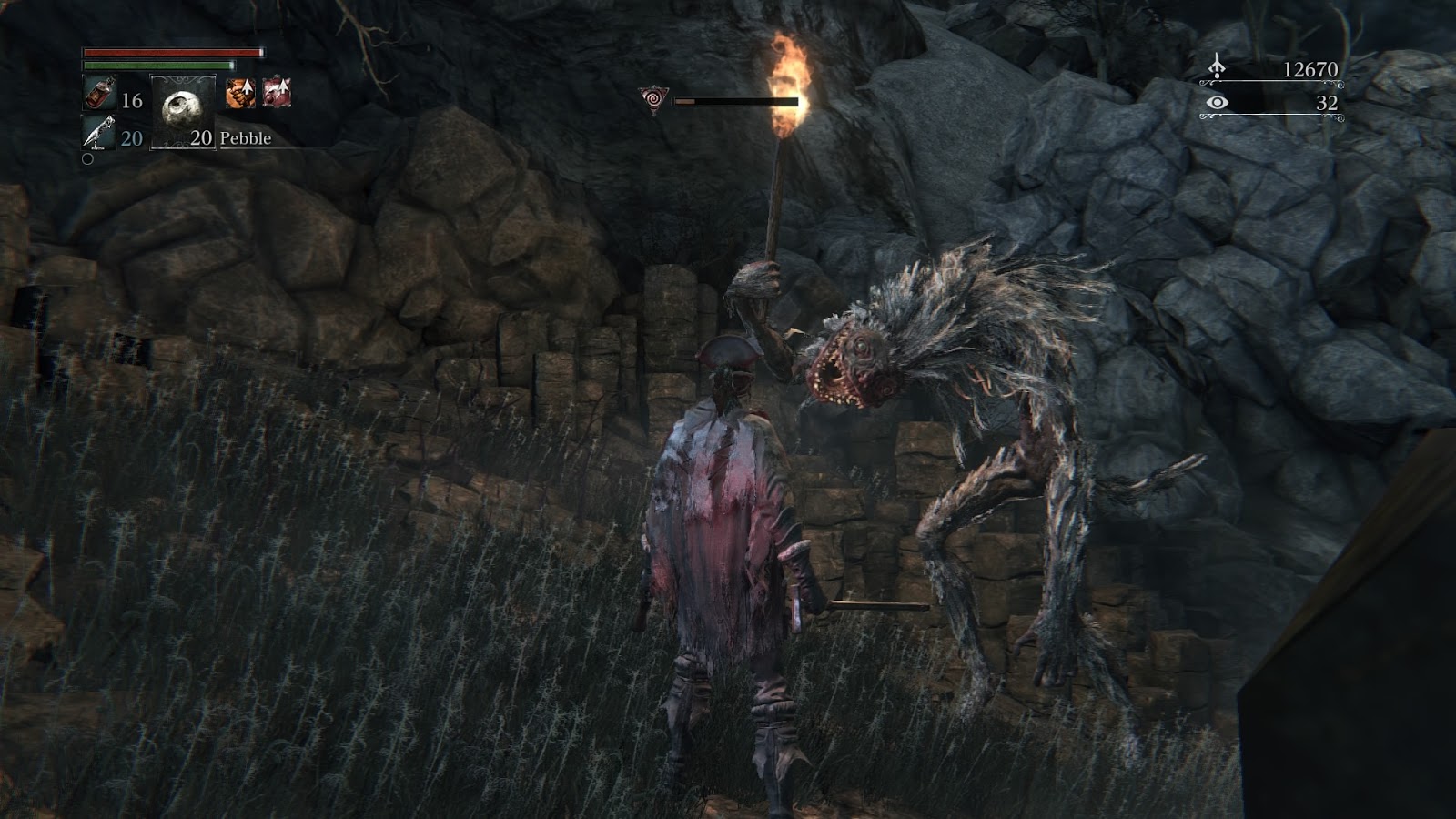 Another strong influence on this game's atmosphere is Resident Evil 4. You're constantly chased by murderous villagers armed with farming utensils, but it wasn't until I hit Hemwick Village that the game went full RE4 on me. This spooky, deadly little farming community features villagers that look straight out of RE4, complete with miniature versions of that game's hulking El Gigante. In a forest area soon after, I found villagers who had parasitic snakes burst from them much in the manner of RE4's Las Plagas. You're a lot better armed here than Leon Kennedy was in RE4, though, even if you don't have his sweet wrestling moves. 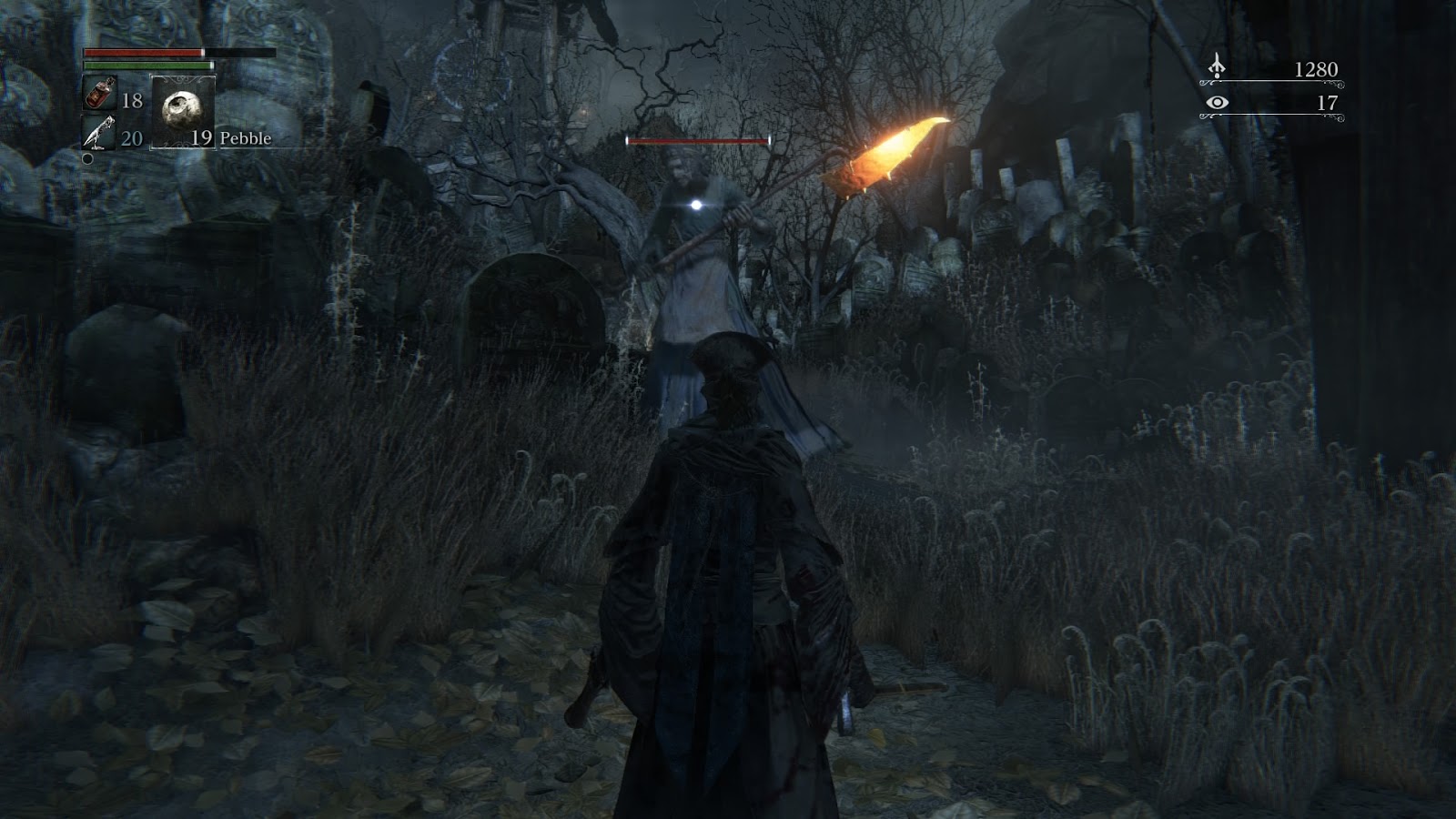 Some people have compared the Souls games to the early Castlevania titles; punishing games where if you made an attack or a jump, you were committed to it, with a heavy focus on your character's weightiness and every regular enemy being potentially deadly. Bloodborne takes this comparison even further by introducing Cainhurst castle, an optional area that really, really feels like a small version of Castlevania. From its Fleamen to its haunted library to its boss fight with a grim reaper/Dracula hybrid, Cainhurst is just an amazing take on a 3D Castlevania; better than any of the actual 3D Castlevania titles. It's a side area that you are completely safe to ignore, which is a shame, because it's probably my favorite area in the game. 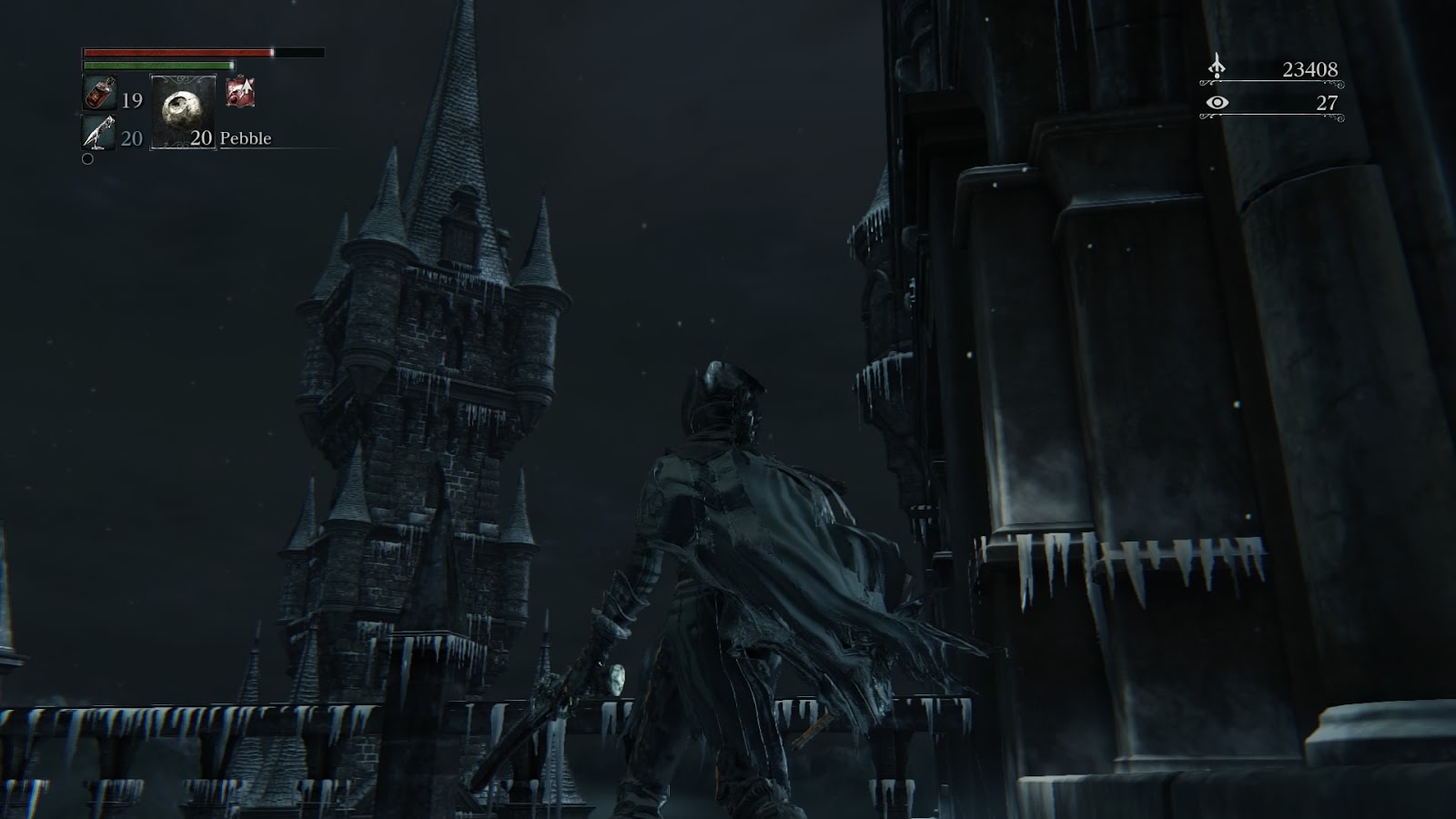 Bloodborne is a great game with a few ugly spots and will likely remain one of the year's best. I don't think I can say I like it more or less than Dark Souls; it probably has my favorite level design in the series, with tons of expertly places shortcuts and secrets, but it's so different in spite of all the similarities that I find it hard to place them anywhere but side by side. It's a wonderful game for players with patience, and I'm excited to see where Miyazaki and his team goes from here. 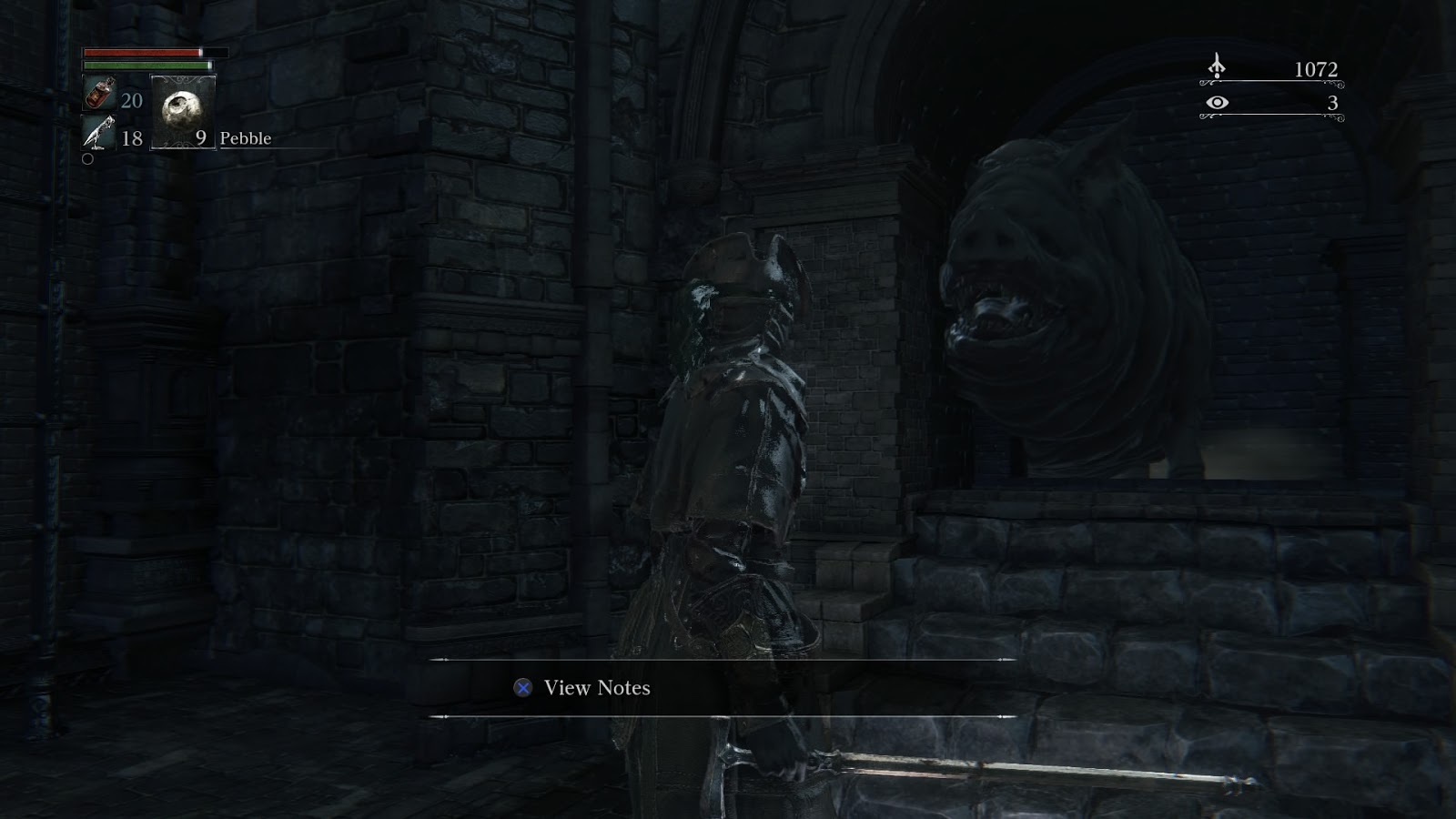