SoulCalibur II HD Online is an updated version of Namco's classic 2002 weapons-based fighter. I've always loved fighting games, and I must have pumped hundreds of dollars worth of quarters into our local SoulCalibur II machine back when the game was first released. It was the first time I really tried getting into a fighter competitively, spending a good portion of the summer of 2002 with my buddies at a now closed arcade at the Searstown mall in Leominster, MA.


Playing casually together and losing over and over again against better players that we formed a rivalry with was a big part of our fun that year. For some reason, a bunch of regulars played in pairs, swapping off who played each round.We'd often get trounced by a pair of Talim players with the user name JoshTim and a pair of Nightmare players using the name DenMatt before finally getting better at the game and starting to win with our Voldo account, using the wonderful screen name Dung. Sometimes we'd win a match and have our opponents storm off and say that the control calibration was off. Usually, they'd just challenge us again and beat us handily.

Thought nothing matched the hours we spent playing SC2 in the arcade in 2002, we did keep up with the game for years, playing the home version regularly throughout college and every now and then making our way back to that old machine to check on our Conquest Mode stats, a mode where local players could make accounts to fight in a single-player mode made up of AI opponents based on the play styles of other local players. It was a really cool mode, and it's a shame it never made it into any of the home versions. 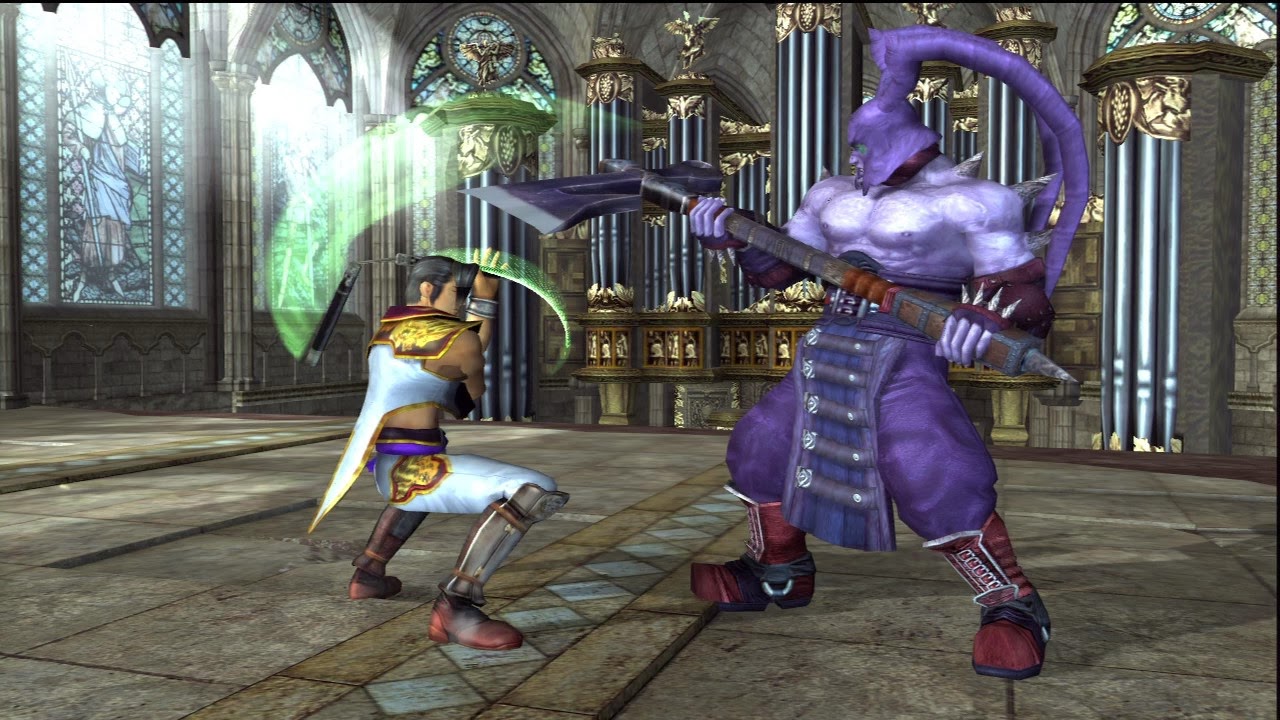 I'm not interested in gaming meet ups or tournaments, so when that arcade closed, that was the last time I really dedicated myself to learning every in and out of a fighter. I still play a lot of them online and locally (Street Fighter 4 being the most played in the last five years) but there was definitely something unique and memorable about groups of young nerds glaring at each other and fighting it out in SC2. While online play couldn't ever replace that, it's still nice to have, even if Namco implemented it in the laziest possible way for the HD re-release of SC2.

SoulCalibur II HD Online was released around the tenth anniversary of the original edition's home console release, a fact that makes me feel pretty old considering how much time I invested in the original. It contains every mode from the original release, along with console-exclusive characters Heihachi and Spawn, who were originally only available on the PS2 and Xbox respectively. Sadly, the Gamecube version's guest character, Link from the Legend of Zelda series, is absent, and there are no plans for a WiiU release that would include him. 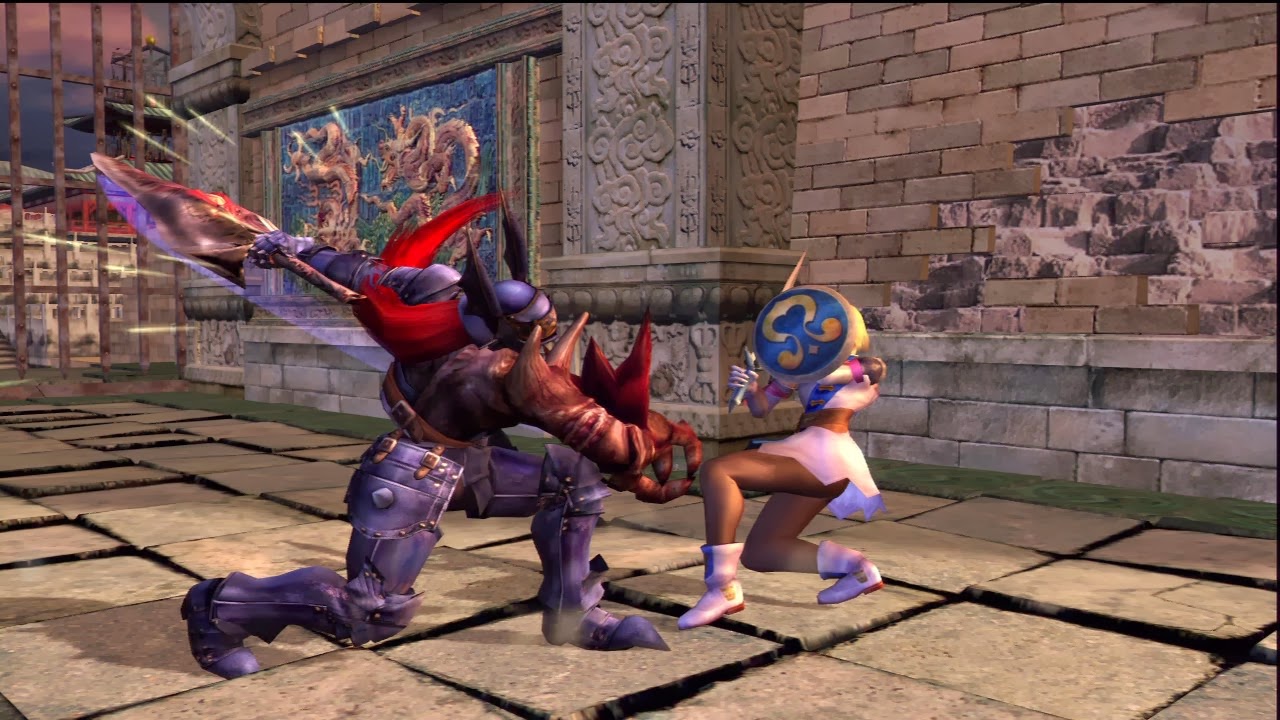 Standard arcade mode, time trial, and survival modes are here for basic single player fighting. Extra versions of each mode exist where players can use special weapons with unique properties to mix things up. Each character has his or her own ending, unlike the incredibly low effort single player mode in the most recent installment, and there's an extensive campaign called Weapon Master Mode where players fight through a decently long series of stages with a complete (though ignorably dull) story and varying objectives per stage. In this mode, players can buy new weapons, costumes, videos, and unlock characters. I'm actually not pleased that this is still a requirement for unlocking the game's cast, since I picked this up mostly for multiplayer and unlocking the game's final playable character is an incredibly long and not very exciting ordeal. Still, for people who enjoy the series' single player content, it's at its best here, even if the wonderful character creation engine from the third, fourth, and fifth installments is absent.

Local multiplayer features both one on one matches and my personal favorite, Team Battle mode. In this mode, players choose up to eight characters each and fight it out in a test of endurance to see who can clear out the other player's roster first. I've loved this mode since the first SoulCalibur, and it's been inexplicably absent form recent sequels. I wish it were playable online, but I'm just happy to have it back. 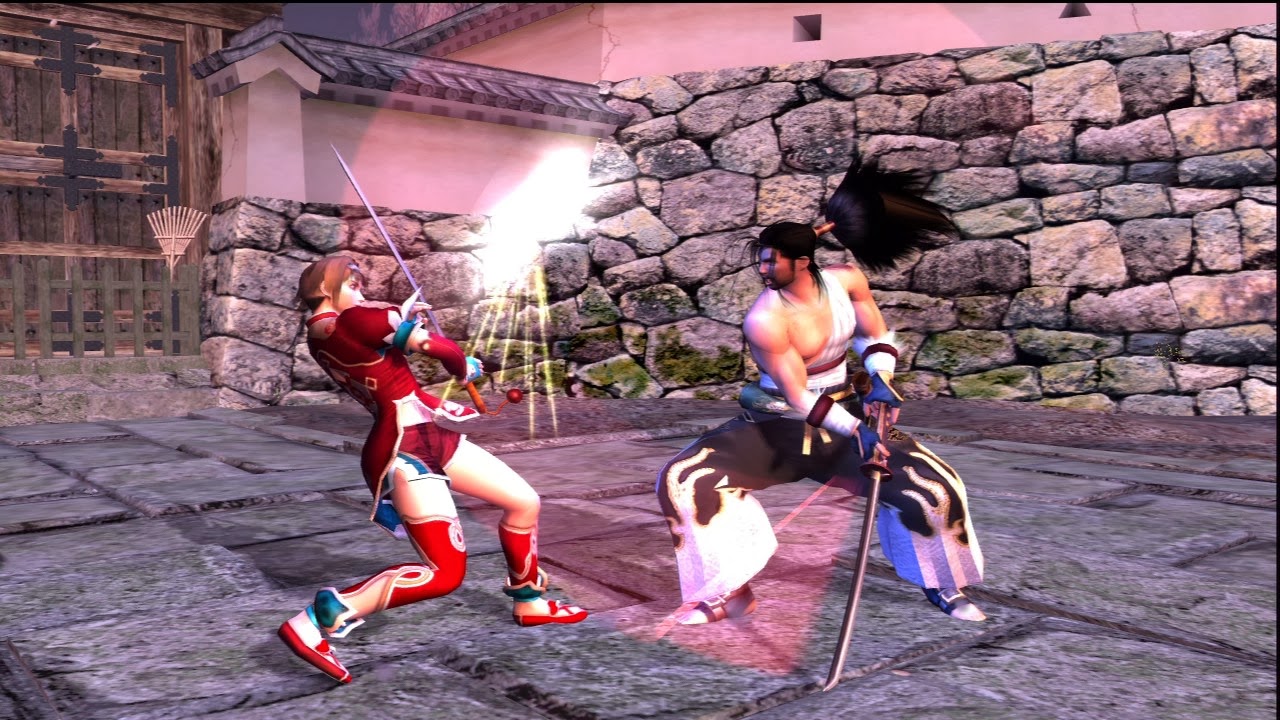 Visually, SoulCalibur II has never looked better. The game displays in 720p and not full 1080, but its textures look massively improved over the original release and its character models are extremely smooth. They're simpler and cartoonier than the characters in the current generation sequels, but I actually prefer this look to the one in SC4 and 5. To me, the art style in this installment is the best SoulCalibur ever looked, and it's really great to have a nice looking HD port that really makes it shine. See the pictures below for an example of just how much better this game looks compared to the original PS2 version (the Gamecube and Xbox versions looked better, but still nowhere near the new one.) The game's music is still great and its sound effects and voice clips are wonderfully corny, but it does lack the ability to use Japanese voices for its dialogue like the original release allowed. As far as I can tell, that's the only thing that was cut from this release.
The game's online component is one of its main selling points (it's in the title!) but sadly its most poorly designed. You have two options: Ranked Matches and Quick Matches. Ranked keeps track of your wins, losses, and player points, while Quick is for more casual fights. However, there's a ton of problems in each mode. First, the netcode just isn't great, and in an average match the game feels less responsive to me than SC4 and 5 did online. With a strong connection to someone nearby, it's almost perfect, but another major problem comes with that: There's no lobby system, at all, so you can't have rematches. If you find someone you had fun fighting in Quick Match, there's no way to keep fighting them. If you want to play online with a friend, you need to send a new match invitation every single time, and especially on the PS3 this process is sloppy. You can search by connection strength, but no meter is displayed to show you how good your connection is before a fight starts. You cannot search by region. Searching for similarly ranked players continuously matches me, someone with a 50/50 win/loss rate, with players who have a 95/5 win/loss rate. You lose far, far too many player points with each loss, even against players who massively outrank you. There's no separation of player points per character.

Most of the problems with the game's online system could potentially be patched out, but as it stands now, I absolutely can't recommend this game if you're looking to play online with your buddies. For casual play with random strangers, it's not terrible, but it's only as good as it is because the core game is so excellent. For offline play, whether single player or local versus, there's no fighter I'd recommend more. SoulCalibur has always been beginner friendly, and SC2 is both the most beginner friendly installment of the series AND the most satisfying at higher level play. None of the awkward, poorly conceived systems like SC4's finishing moves or SC5's supers are present. There's no power meter to worry about in addition to your health. Movement is fluid, and combos are simple. SC2 is the series at its high point, and it feels great to sit down and play it again, even if it doesn't really work online.
Posted by surlaw at 10:16 PM