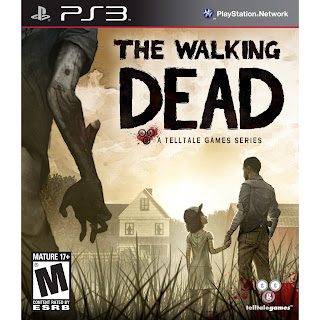 In August 2012, I wrote a review of the first two episodes of Telltale Games' episodic series The Walking Dead. Between April and November, Telltale would release five episodes of this point-and-click adventure game based on the comic book and television show of the same name. Large parts of this review reuse text I'd previously written, since all of the technical bits still apply. This review serves as a replacement for the original, since I plan to cover everything previously said and more, but for posterity's sake, here's a link to the old version. As a warning, that old review spoils a few early plot points.

This review contains no major spoilers. I intend to write a separate post on my feelings about the individual episodes that should absolutely not be read before playing them, but if you haven't played the game yet, you're safe reading this.


When The Walking Dead was first announced, I wasn't interested. I felt burned out on zombie games and movies and I hadn't seen any of the show or read any of the comic. It took a lot of good word of mouth and a very well made demo to convince me that this was something different, something that I should pay attention to. I'm very glad I did; The Walking Dead ended up being my favorite game of 2012. I've since watched most of the TV show up to this point and checked out some of the comic, and while both are decent, I honestly believe the game surpasses them in both quality of writing and in making you truly care about its central characters. The most important characters, Lee and Clementine, are the most compelling I saw in a game all year. 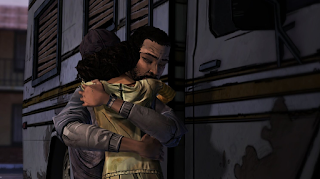 While there are a few cameos from the show/comic, the story in the game version of The Walking Dead is intended to stand on its own. The player controls Lee Everett, a professor at the University of Georgia who was arrested for murdering a man after finding his wife having an affair. Lee is handcuffed in the back of a police car heading down the highway when the zombie outbreak begins. The car crashes and Lee is freed, suffering only a leg injury. He flees to a nearby house and meets Clementine, a very likeable, very well written eight year old girl whose parents were away in Savannah when everything went sour. Clementine serves as Lee's moral compass, his reason to live, and his redemption.

Between dialogue scenes, players move Lee around with one stick and aim a cursor with the other. Once you move over certain objects, you are given options with which to interact with them. Most puzzles are simply "Find object, use it here" types that don't require much work, but for the most part they're not asinine. The only really terrible puzzle is showing an otherwise intelligent adult character how to use batteries. As the series progresses, there are fewer and fewer puzzles, as Telltale grows more confident in their writing and less reliant on needing to keep things video gamey. I believe this was a solid choice.There are some combat scenes, more towards the end, in which players must press (or mash) specific buttons in order to survive. Dying doesn't have a whole lot of consequence and barely sets you back, but these sequences are still pretty intense. Knowing when to stop and when to keep fighting provides major consequences in a few key scenes. 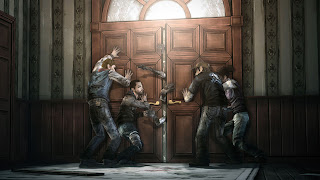 I am very pleased that there's no right or wrong answer in most situations. How you choose to treat people changes the tone of the narrative, but there's no optimal way to play. All dialogue choices feel natural, including the choice to sometimes remain totally silent. Choices are mostly made on a timer, forcing players to keep their wits and morals about them at all times. I mostly made my choices in order to keep Clementine happy, sacrificing the good will of others and occasionally Lee's health to do so. Another player might choose to mostly ignore her. The writing is good enough to sustain this through each episode, and there are some surprisingly funny bits of dialogue scattered throughout, mostly from Clementine and from Kenny, who can either become Lee's best friend or despise him based on how you treat him and his family. Kenny feels especially realistic, in that even if you support him 90% of the time, he may still hold a grudge for that one time you let him down. Players may say, "I did everything I could to please this guy, why is he being a jerk?" The answer is that sometimes, even when you try your best, not everyone's going to like you.

At the end of each episode, your major choices are shown in comparison to those of other players. Most choices end up being about 50/50 across the player base, but a couple of times I was on the extreme end of a 90/10 split. This is absolutely fascinating to dig through, though the game doesn't list the results of every single choice. At the end of all five episodes, a final stats screen sums up your playthrough, but my summary had a couple of spots that were incorrect. Still, when it works, it's great.

The only other complaints I have are also technical. My biggest gripe is there's no way to invert your y-axis for camera/cursor control. The controls would be fine in the PC version with a mouse, but I have trouble using non-inverted controls. Another problem: My game told me it was saving, only to have me quit and find myself back 15 minutes before that save the next time I played. There's no manual save option to prevent this. In a different sort of technical frustration, subtitles can only be displayed one at a time, so if characters speak over each other one's dialogue will get cut off. On top of that, they don't always match what's being said and I've seen more than a couple misspellings. Seeing "want" subtitled as "wan't" multiple times is really hard to overlook in an otherwise well written story. I've also seen some complaints of save data being lost, mostly from players playing the PC version. Thankfully, I never encountered this. I did have the game freeze once or twice, but no data was lost.

Visually, the game goes for a comic book style of animation and looks quite good. It has a lot of grotesque death scenes, but these are clearly shot in order to pull an emotional response from the player rather to be exploitative. You see some horrible things and feel terrible about witnessing/doing them. You're often backed into situations with no clean way out and they are designed in such a way that it's genuinely emotional. I actually felt terrible killing zombies here. It's a welcome change from games like Dead Rising with big flashy kill counters taking up part of the screen. Zombies here feel more like George Romero's monsters than the more popular wacky, zany, pop culture use of zombies in media today. The Walking Dead takes a stale genre and makes it feel alive again by, surprisingly, feeling more like a horror film from the 60's/70's, and by forcing you to be the one to make terrible decisions. 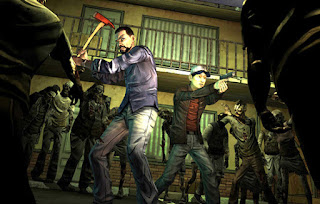 The game is currently available in a variety of formats as a downloadable title: PS3, Xbox 360, PC, and iOS. Five episodes total have been released to download and a disc version is now available at retail stores that includes the whole thing. I highly recommend giving these games a chance if you're interested in games as narrative and can stomach some rather awful scenes.
Posted by surlaw at 11:37 PM