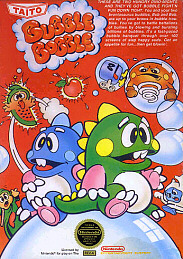 In continuing with the theme I started with my reviews of Zelda II and Super Mario Bros. 2, I'd like to talk about another of my all-time favorite NES games: Bubble Bobble. This cooperative puzzle/platformer game was released in arcades in 1986 and has been ported to over a dozen systems since. While I've played the arcade version a few times, my fondest memories of Bubble Bobble are with its NES port, which, unlike many arcade conversions of the day, is actually an almost perfect port. Some levels were rearranged, point values for items changed, and twelve secret levels were added, but everything wonderful about the arcade game is present on the NES.

Bubble Bobble was designed by Fukio "MTJ" Mitsuji for Taito. Mitsuji would go on to design one of the game's numerous sequels, Rainbow Islands, the next year, and in 1989 would design another of my arcade favorites, Volfied. An interview with Mitsuji was included in the 2005 Taito Legends compilation, filmed only a few short years before his death in 2008. In this interview, Mitsuji shows his passion for the industry and his desire to always try something new even when making a sequel, something he exhibited strongly when you look at the differences between Bubble Bobble and Rainbow Islands or between Qix and Volfied. Mitsuji released only one more game after Volfied, 1991's Magical Puzzle Popils, before switching gears from designer to professor, teaching a new generation the art of game design. 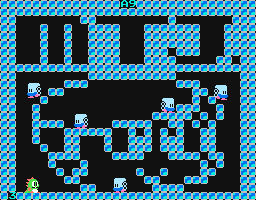 In Bubble Bobble, Mitsuji attempted to teach players the power of friendship. Bubble Bobble is one of the earliest titles to feature multiple endings, and in order to reach the best ending, players must complete the game in co-op mode. The end sequence praises you for discovering the true strength of friendship, which sounds pretty corny, but it works. If you're not actively working with a buddy, you're not going to see the ending (without cheating anyway), and playing a whole run of the game with another person is an exponentially better experience than playing it alone.

The game play in Bubble Bobble is simple but effective; throughout the game's 99 main and 12 secret stages, players control two small dragons, Bub and Bob, as they jump around single-screen rooms trying to defeat every enemy and eat every bit of food that appears. All contact with enemies is fatal, and players must defeat them by using the dragon bros' signature power: blowing bubbles. These bubbles, which can be enhanced in speed and range by power-ups, trap enemies inside and can then be popped to get rid of them. Bubbles can also be used as moving platforms if the player holds the jump button while jumping onto one, an ability that's absolutely crucial in some of the game's more challenging stages. Occasionally, power-ups that allow players to breathe fire or unleash a lightning storm upon the stage appear to make things a little easier, and bubbles containing fire, water and lightning will float by in specific stages to eliminate some more troublesome enemy groups. 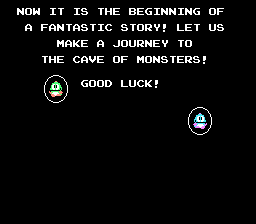 In addition to simple yet tricky game play, Bubble Bobble also features cutesy, well-drawn monsters and a catchy song that plays throughout almost the entire game. Absolutely everything about the game is welcoming, which is probably a big reason it feels so comfortable to play. This game's not out to get you, but it still gets intense when the time's right. Most notably, once you've spent too long on a stage, an ominous tone plays and a white skeleton/whale monster known as both Skel and Baron von Blubba appears to hunt to relentlessly. He only leaves the screen once he's caught you or all enemies have been eliminated; only death can satisfy the Baron. Avoiding this guy is one of the most exciting parts of the game. 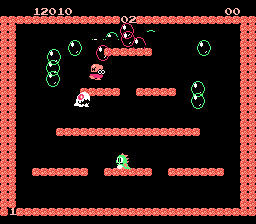 Keeping a steady supply of spare lives is essential, though it matters less in the NES version than in the arcade, since you can use passwords to start from any stage here. Extra lives can be earned by score or by collecting six special bubbles to spell the word EXTEND. These bubbles appear more commonly when players pop a large number of enemies at once.

One of the things that makes Bubble Bobble really easy to get into is its gentle difficulty curve. It's easy to die if you're not careful, but unlike many arcade-based titles, Bubble Bobble isn't in a hurry to kill you off as quickly as possible. The early stages are very simple, containing basic platforming and easy enemies, but as the game progresses, new, more aggressive enemy types appear and great care must be taken in order to successfully jump around. Stage 57 is especially treacherous; even with a partner to help you out, getting to the top of the screen to eliminate the Space Invaders that await you is a trial. 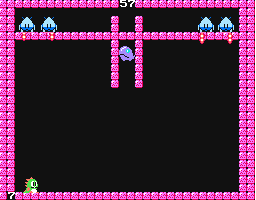 The final boss is an interesting challenge because it's one of the few times when playing alone may actually be easier. In this fight, Bub and Bob drink potions that turn their normal bubbles into lightning-based ones which can then be popped to send bolts at the horrible Grumple Gromit. These bolts can also briefly stun your buddy, so you really have to be completely in sync with each other in order to survive this fight. If you picked up a crystal and entered a special door in stage 99, you will play through 12 special stages before the Grumple Gromit showdown. Even then, you'll only see the True Ending if you replay the game in Super Bubble Bobble mode, which remixes enemy layouts in a (usually) more difficult way. There's a lot of bubble blowing needed if you're going to save the day.

As with most old arcade games, story in Bubble Bobble is minimal, but what's there is decidedly weird. Bub and Bob were some sort of gnome people before being cursed and turned into Bubble Dragons, but honestly, this transformation seems to be entirely for the best. Your gnomish girlfriends have been kidnapped by Grumple Gromit, and the power of love compels you through the Cave of Monsters to find them. The most bizarre bit is that in the True Ending, the Gromit breaks in half, revealing that he was actually composed of two beings; your mother and father. There's a dark streak here when a violent monster who throws bottles at you, known in the original version of the game as the Super Drunk, ends up being your mother and father. Bub and Bob had a hard life. 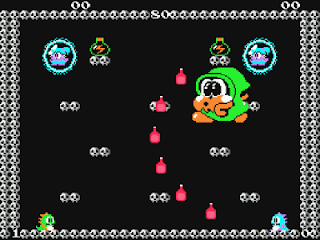 Bubble Bobble has aged well and is still a lot of fun. The NES version is my favorite, but you can also find the arcade version on a compilation disc released on the original Playstation and in the Taito Legends collection on PS2, Xbox and PC. There have been numerous sequels, some decent, some ghastly, but the original remains my favorite. The most recent sequel is Bubble Bobble Neo/Plus, available on Xbox and the Wii, a game that includes both a new set of levels and a remake of the original. Unfortunately, the original stages don't play nice with the new game's physics, the graphics are uglier, and some parts of it feel outright broken. That's best left for a future review, though; what matters is that among NES titles, Bubble Bobble was and still is one of the best I've ever played.
Posted by surlaw at 11:11 PM