From Space Invaders to Arkanoid to Bubble Bobble, Taito has released plenty of famous, frequently played arcade games. Most of their big titles have been re-released in various compilations over the years and have legions of long time fans. The Taito Legends collections, released on Xbox and Playstation 2, are simply bursting with games, including a lot of Taito's biggest hits (though certainly not all of them) in addition to some true rarities. There are games on these collections I'd never even heard of, let alone played. One of the more memorable of these games is 1987's Plump Pop.


In Plump Pop, horrible demons disguised as angels have invaded a peaceful animal kingdom and filled the sky with balloons. This is possibly the least threatening evil plan in a video game ever, but our environmental-friendly animal heroes won't stand for it. Players take control of a family of cats, dogs, or pigs; the parents hold the edge of a trampoline while their child bounces around violently off of balloons and monsters, popping them or otherwise ruining their mood. There are ten stages, each with four sections, including bonus rounds and boss fights. Bosses include a jack-o-lantern carved from a watermelon, an octopus that drops his eyeballs when damaged, and naked kissing angel dudes who turn into demons when struck and then fling piles of poo at you. I'm not just stringing you along here; this is one absolutely weird game, even by 80's arcade game standards. 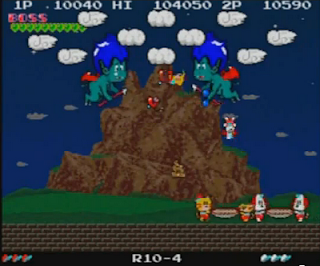 Gameplay is inspired by Breakout and by Exidy's 1977 title Circus, which features people on see-saws instead of cats on trampolines and absolutely no naked pooping demon children. The various balloons that fill each stage are functionally equivalent to moving Breakout bricks, giving points when popped and sometimes dropping powerups. Players can earn construction hats that allow their bouncing baby animal to do more damage, extensions that lengthen their trampoline, and more. It's not a super inspired game, but it's got cute art (outside of some of the more awful bosses) and best of all, can be played by two players simultaneously. You can each bounce each other's animals in addition to getting in each other's way and stepping on your buddy's head. In bonus stages, players compete with one another to catch and eat the most food. It's you; you are the Plump Pops. 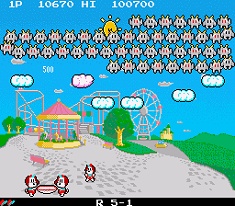 I don't know anyone who has seen this game outside of the Taito Legends collection. The game appears to have never been released outside of Japan, and arcade cabinets seem to be extremely rare, to the point that it's even hard to find pictures of them. Arcade-museum.com, one of the best sources for basic info on classic games, has neither a picture of the game's marquee nor of its cabinet, and as of now no registered collectors have a copy. There isn't even a Wikipedia article for this game! This kind of lost game is exactly the kind of thing I like seeing in compilations. It's not well known, and it's certainly not in demand, but by including it on this disc, Taito gives what would otherwise be a forgotten relic a second chance. Worth playing through with a friend, less so alone. I may be over-inflating its quality, but I do think this game's pretty fun, if only for a few minutes. Its ending doesn't extol the values of friendship like Bubble Bobble, but it does get very conversational with you. 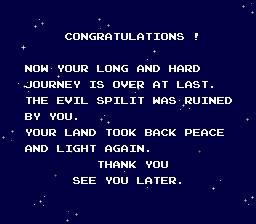