When From Software announced a PC port of their hit action RPG Dark Souls, they also announced that new content would be added to the game, as well as a few balance changes to existing content. The PC port was released in August 2012, and this new content remained exclusive to the PC version for a couple of months before being released on PS3 and Xbox 360 as a $15 downloadable content pack, Artorias of the Abyss. While that's a little more than I generally like to spend on DLC, this expansion pack is among the best I've seen in a modern game and was well worth the wait and the price.

This review is meant solely to cover the new content introduced in the Artorias of the Abyss DLC, and thus is intended for players already familiar with Dark Souls. For a more general review of the main game, please see my previous review.

Artorias of the Abyss introduces several new areas, four entirely new bosses, and a complete story. It begins with the player pulled back in time hundreds of years to the final days of Knight Artorias, a man of legend referenced throughout the base game. Without spoiling anything, this expansion tells his story and the story of his legend in a poignant way and somehow manages to work a time travel story into a simple, minimalist narrative without feeling wrong. Everything fits nicely, and it's both exciting and sad seeing familiar characters from your present day adventure show up in Artorias's world. It adds a lot more weight to your character being the Chosen Undead fated to change the world, as we get to see that not everything was up to fate; you're thrown into and guided through situations that amount to a predestination paradox. Throughout the six or seven hours I spent in the world of Artorias, I felt more for its time travel story than I did in the dozens I wasted in Final Fantasy XIII-2. 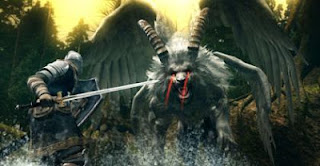 Every enemy you meet in these new locations is new, with only the simple dog enemies serving as basic reskins of previous enemies. While the locations aren't entirely new (for reasons I won't spoil), their layout is completely unique and visual style new. The bosses you face, three required, one optional, are among the hardest in the game, and the final boss of this expansion is by far more suited to be the game's final boss than the one in the base game. It's an intense, relentless fight that took me a couple hours of retrying to win, but it will take you less if you've built a more expertly crafted character than the one I did. I've never been one to delve too deeply into min/maxing my characters. Good players can get through the main thrust of the new content in about two hours. I consider myself decent but by no means an expert and it took me 6-7, including time spent assisting a couple other players. Less skilled players will take even longer. I have no complaints about its length.

There are several new spells, weapons, and sets of armor introduced in this DLC. For a complete list, visit the Dark Souls Wiki. Some are easy to miss, and some, if you're like me, will be missed if you feel bad about killing friendly NPCs. The most fun new items are wooden orbs that shout out short phrases when used, adding the first vocal communication to a Souls game, even if it doesn't go beyond HELLO, THANK YOU, I'M SORRY, and VERY GOOD. The goofy bellow of HELLO echoing through caverns is one of the silliest things in the series and definitely worth finding.

In addition to the new story content and new bosses, this expansion also unlocks an arena after its second boss fight in which players can seek out and duel one another outside of the normal invasion/assist system. Players can fight one on one, two on two, or in a four-way free-for-all. For people into this game's player vs. player system, there's a lot to like here, but I've always been one for solo/co-op Souls excursions rather than competitive. Also, at least in the PS3 version, connecting to other players to duel can be a long, slow experience, even if you normally have no problem connecting to invade/assist. I'm not sure what's wrong here, but I spent more time waiting for players here than at any other time, even when there were plenty of people to assist/get invaded and killed by in the rest of the DLC areas. Maybe it will get better as more players complete the new content. 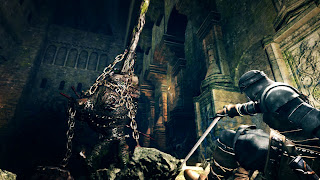 I loved the new boss fights and the new areas are very exciting to explore. I think this DLC is well worth buying, and is possibly the most enjoyable DLC I've bought on my PS3. That said: The way you launch the new content is asinine, and it's very poor that From didn't include a description for how to do so in the PSN store.

To save you from having to look elsewhere, this is how to launch the Artorias of the Abyss DLC:

All of this stuff would be totally fine in the PC version, where the expansion is integrated into the game, but for paid content in the console versions, it's poor form to not explain how to use the product you just bought. That's really my only complaint, though. Artorias of the Abyss is a good story, a fun setting, and offers some of the best boss fights in the series. Souls fans old and new alike will find plenty to like here.
Posted by surlaw at 2:12 AM