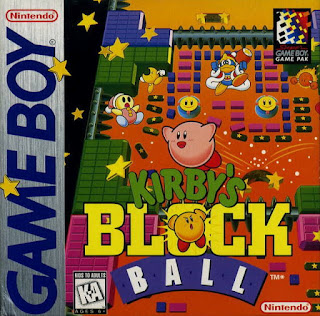 Released on the Game Boy in 1996, Kirby's Block Ball is a Breakout-styled ball and paddle game in which Kirby is the ball. The goal is largely the same as Breakout and its various spin-offs; bounce your ball into bricks to break them, hit enemies for extra points, occasionally get power-ups. This game is one of the better Breakout types I've played, but ultimately, it's still Breakout, love it or hate it.

Kirby's Block Ball looks about as good as a Breakout game can. The character designs are cutesy and Kirby's animation is always good. The music's nice but not up to par with the mainline Kirby titles. It controls about the same as other Breakout types, but adds the ability to inflate Kirby by pressing A right as he hits the paddle, making him larger and temporarily immune to spikes and other hazards. You can also press A to activate any power-ups you've eaten, including Rock (causes Kirby to fall straight down, through multiple bricks), Fire (similar to Rock but shooting upward instead of down) and a few more. The power-ups give you a huge advantage, but unfortunately all appear in scripted areas after defeating enemies in specific stages, rather than spawning randomly from broken bricks. As a result, the game feels more puzzle-ish and less like a pure arcade game, which hurts its replay value even if you care about high scores. 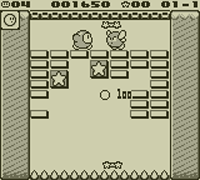 The game is divided into ten main worlds, each with its own end boss. The bosses largely come from previous Kirby games and are fun to watch parade around. Each world has a score threshold for you to reach, and once you've reached it in all ten, an eleventh world is unlocked with the dreadfully hungry King Dedede as its master. The game is not particularly difficult, and is probably more forgiving than a lot of Breakout style games due to its slower speed and the amount of extra lives it throws at you, but reaching these score thresholds can actually be pretty tough if you're not a good Breakout player (I'm not). Breaking up the action are four mini games, none of which are fun. Kirby minigames tend to be entertaining, but the ones here are merely forgettable.

If you like Breakout and Kirby, this game's a pretty safe choice. If you like neither, nothing here's going to convince you otherwise. It doesn't entertain me as much as Kirby's Pinball Land does, but there's nothing outright bad. It's kind of silly that a Breakout type Kirby game takes significantly longer to finish than the original Kirby's Dream Land, but if you want to give it a shot, used cartridges go for $5-10, or you can buy it digitally on the 3DS for $3.
Posted by surlaw at 4:51 PM